It’s not often that an entire community mourns one of its members. It speaks volumes about Ray Porter’s character that since hearing of his death this week, hundreds of current and former residents of Huntsville have taken to social media to extol the virtues of the gentle, kind, and friendly man.

Ray was born in Cape Breton in 1939. After living in Toronto for a while, he made his way to Huntsville.

Ray’s contributions to the local community were many. He was a constable in Huntsville’s police force in 1968. When the OPP began policing in the region, a decision he didn’t approve of, he became a bylaw officer for the town for more than 30 years. In both instances he went about his job in a friendly manner, keeping the peace with quiet good humour.

Mayor Karin Terziano said in a media release today, “I will always remember Ray as a true gentleman. He was often seen doffing his cap and holding open the door for others. He truly made Huntsville a better community by being here.”

Former Mayor Hugh Mackenzie said, “Ray Porter was a stalwart pillar in our community. He was gentle, friendly, and respectful. When I was mayor, he would salute when he saw me in public, to my embarrassment. And if Ray Porter were on the street when a funeral possession went by, he would stop, take off his hat, and stand at attention. That is the kind of guy he was.”

He later became the crossing guard at Huntsville High School, a position he held until the day he had a stroke in 2015. He often tipped his hat at passing female motorists and always had a kind word for the high school students who passed by—many of them refer to him as Mr. Porter to this day.

Ray was also a local volunteer firefighter for 19 years.

Town of Huntsville flags were lowered to half-mast today in his honour.

Ray volunteered with many local organizations, including the Huntsville Shriners Club and the Order of the Eastern Star, a Masonic group. He did charity work in hospitals for burn victims.

Perhaps Ray’s most beloved role was that of Santa Claus. He began as one of Santa’s helpers at the Eaton’s on Main Street, where Pharmasave is now. Then, for decades, he rode the sleigh at the end of the annual Santa Claus Parade as the big man in red, delighting children with his jolly “ho, ho, ho”. But his holiday spirit didn’t stop there: he appeared at schools, nursing homes, the Legion, the hospital, and private parties, spreading Christmas cheer. He could also be found manning a Salvation Army kettle each year, helping to raise funds for those in need. 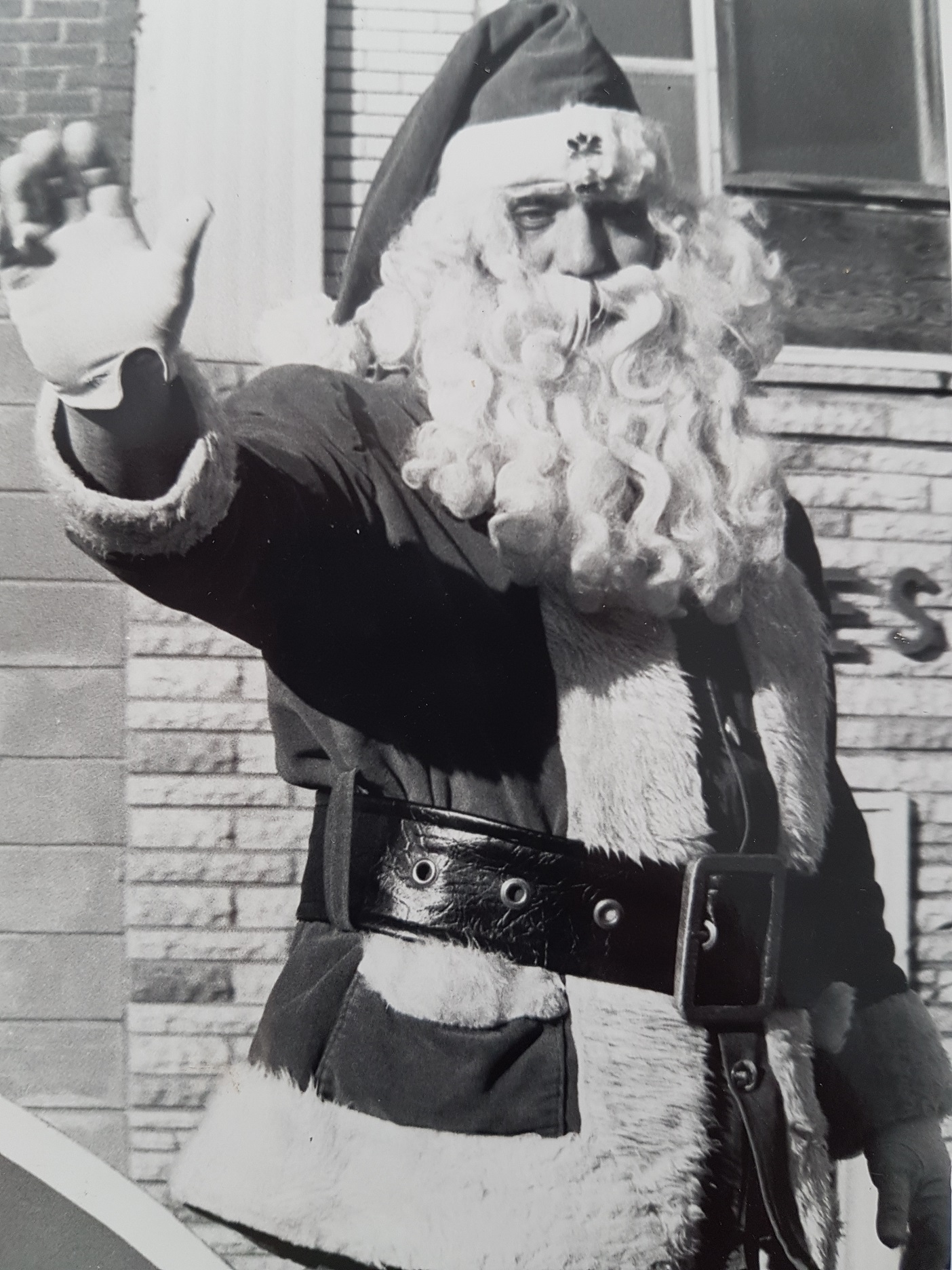 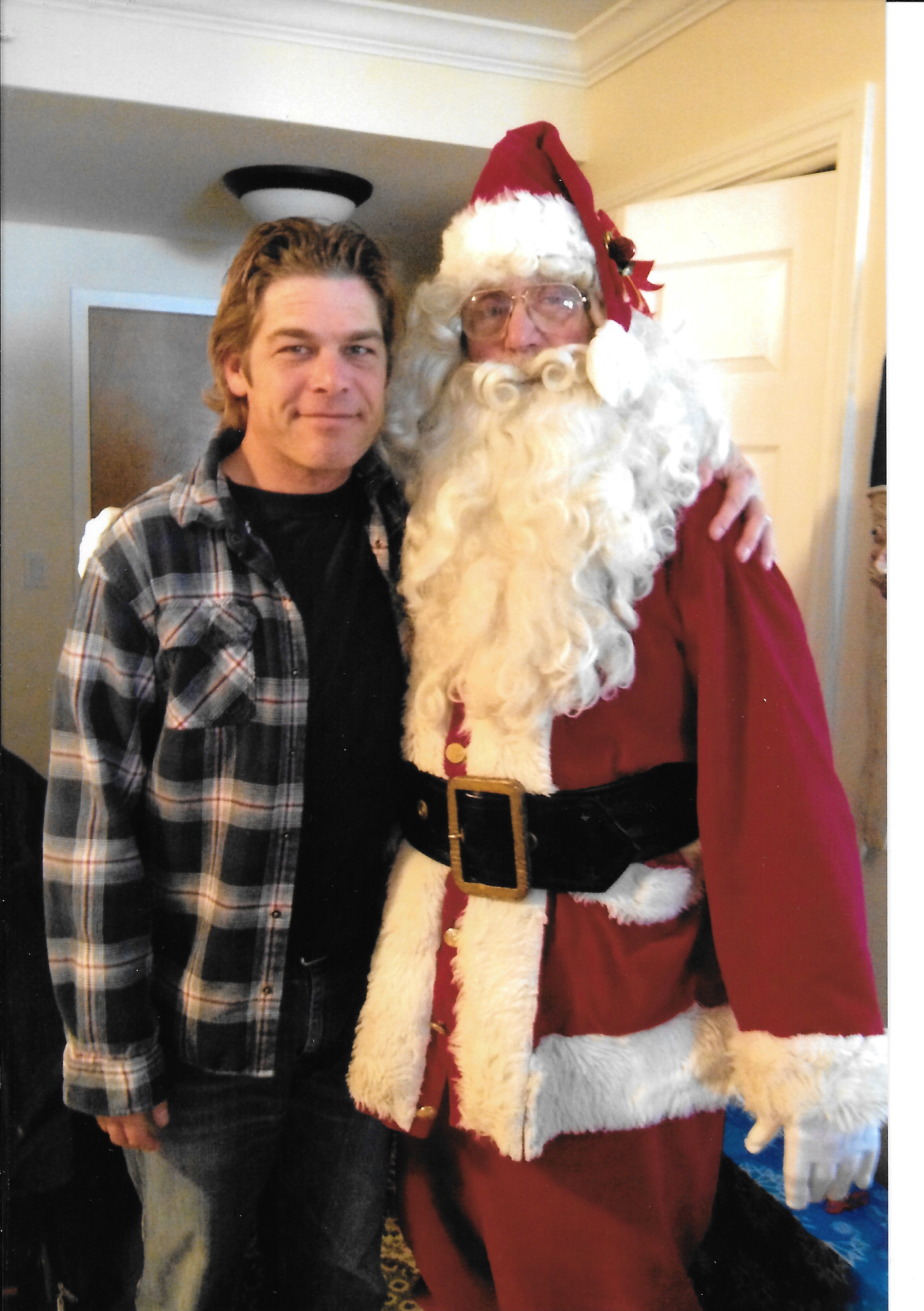 (Above left) Ray Porter was Huntsville’s Santa Claus for decades. (Above right he’s with friend and former neighbour, Grant Nickalls.)

He was a friend to many. Huntsville resident Grant Nickalls counts himself lucky to have been among them.

Nickalls grew up in the house next door to Ray and Bev Porter and shared many meals with them. Ray was like a second dad to him and they remained close long after Grant moved into a home and family of his own.

“He was always just lots of fun to be around, always encouraging, he always had a huge smile on his face,” recalls Grant. “When you would see him he made you feel like he’d been waiting all day to see you. He always made you feel special and important.” That was true for everyone he met, no matter their age.

Ray was an old-school gentleman, too, notes Grant. “When a woman walked into a room he would stand up. He was really big on being respectful.”

And despite his friendly demeanor, he commanded respect and wasn’t afraid to mete out a little discipline when needed.

Grant previously told Doppler about a time when his parents were out of town and the Porters were watching him. He was caught shoplifting rolls of hockey tape from a store. Although Ray had retired from policing by then, he took Grant to the local detachment and placed him in a cell. “[Ray] said, ‘If you want to continue to steal get used to this feeling. Keep stealing.’ It worked. I haven’t stolen anything since,” says Grant.

Community members have been swift to share memories and condolences on social media, many offering posthumous thanks for his many years of service to Huntsville.

A lover of both history and storytelling, Ray would perhaps be happy to know his own legacy will live on in the memories, stories, and hearts of Huntsville’s residents for many years to come.

Due to COVID-19 restrictions, there will be no formal gathering at this time. Those who knew Ray are encouraged to share a memory at www.mitchellfuneralhome.ca.

In lieu of flowers, Ray’s family suggests donations to either the Ontario Heart & Stroke Foundation or the Shriners Hospital for Children.