You are here: Home / Entertainment / Bringing art to all: Town of Huntsville showcases local and Canadian art in rotating exhibits

The next time you wander through the Canada Summit Centre (CSC) on your way to the pool or a hockey game, pause for a moment and consider what it would look like if the walls weren’t adorned with beautiful art.

Since 2010, the Town has worked in collaboration with four local artists’ groups — the Huntsville Art Society, Muskoka Arts and Crafts, the Muskoka Autumn Studio Tour, and Artists of the Limberlost — and volunteer curator Kelly Holinshead to plan rotating exhibits that showcase local art as well as the works of other Canadian artists.

Almost 30 exhibits have graced the walls of the CSC art atrium, located on the main floor near customer service and on the second floor just above it. Art works are available for viewing any time the building is open — currently from 6 a.m. until midnight on weekdays, 6:30 a.m. until midnight on Saturdays, and 7:00 a.m. until 11:00 p.m. on Sundays. (Click here to confirm hours.)

The current exhibit by the Artists of the Limberlost and their guests began on November 15 and runs until February 13 to cap off “a really big year for art in Huntsville and a really successful year in many ways,” says Teri Souter, the Town’s Manager of Arts, Culture and Heritage. 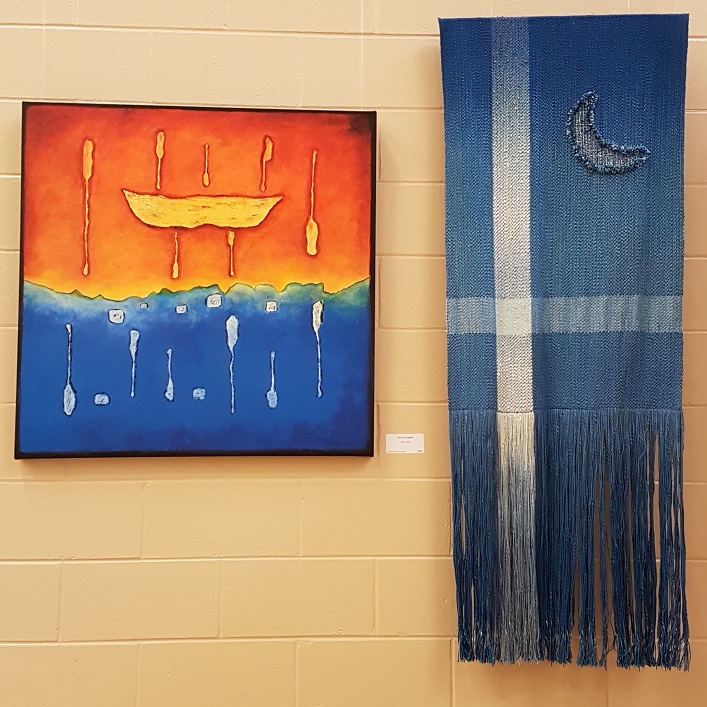 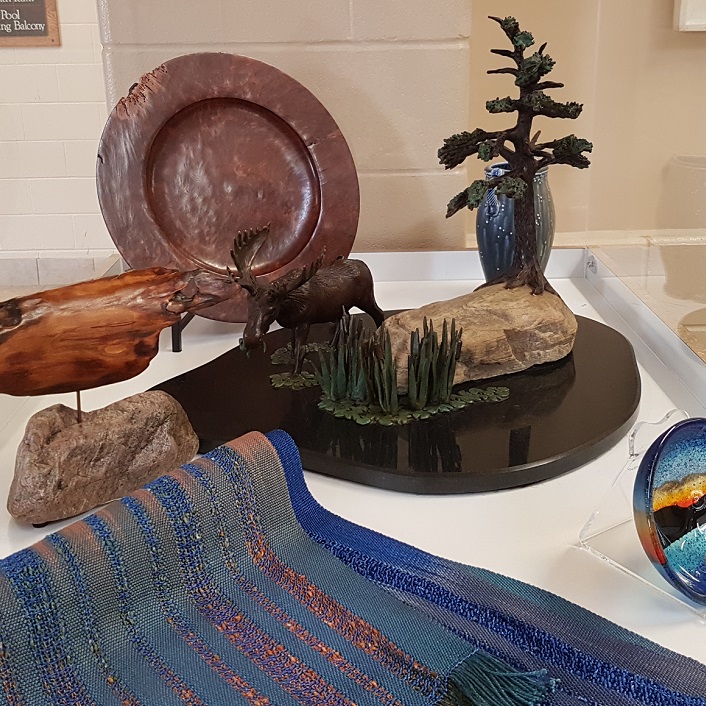 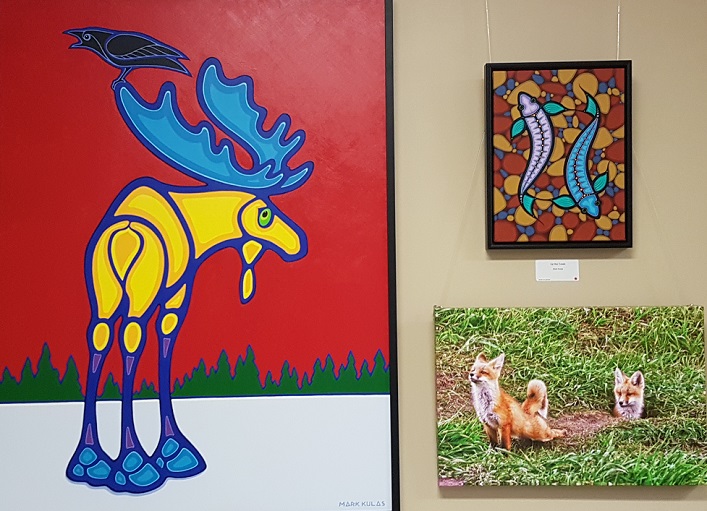 Above: Some of the items you can see in the Artists of the Limberlost Members Show, on display at the Canada Summit Centre until February 13, 2018 (supplied photos). For information on these and all art works pictured in this story, please contact Teri Souter, the Town’s Manager of Arts, Culture and Heritage at 705-789-1751.

Earlier this year, and following a much-needed refreshing of the paint on the art atrium walls, a travelling exhibit, The Barn Raising Project from Simcoe County, presented 40 hooked rugs depicting rural barns from February 21 to April 2. It was complemented by hooking implements, frames and partially finished works from the Muskoka Heritage Place collection. 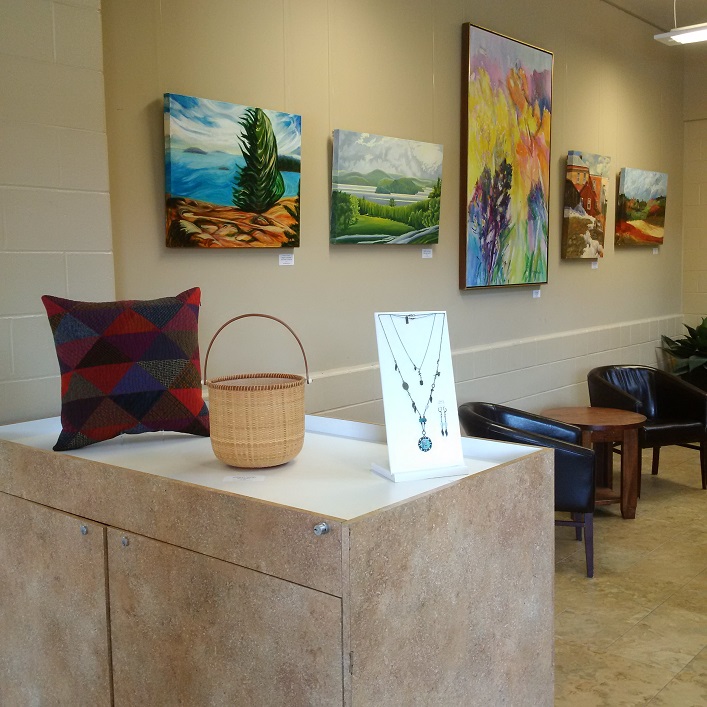 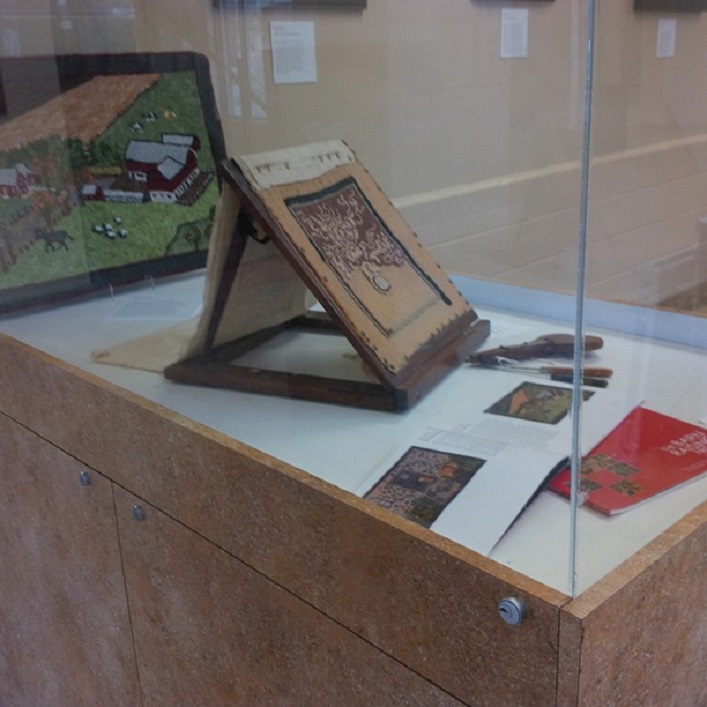 Above: (left) Works on display at a past Muskoka Arts & Crafts members show; (right) The travelling exhibit The Barn Raising Project

A private collection, Indigenous Spirit Matters shared by Bryan and Donna Marie Bowers and which ran from April to August, was an important one for Canada’s 150th year, says Souter. “It was important that we paid homage and tried to use art from First Nations and Indigenous Peoples to underscore their role in our country. It was really transformation through art. These were pieces that really made you think.”

The exhibit got some rave reviews and the collection is now touring all over the country. “We were the first and I’m really proud of the work we did with it.” 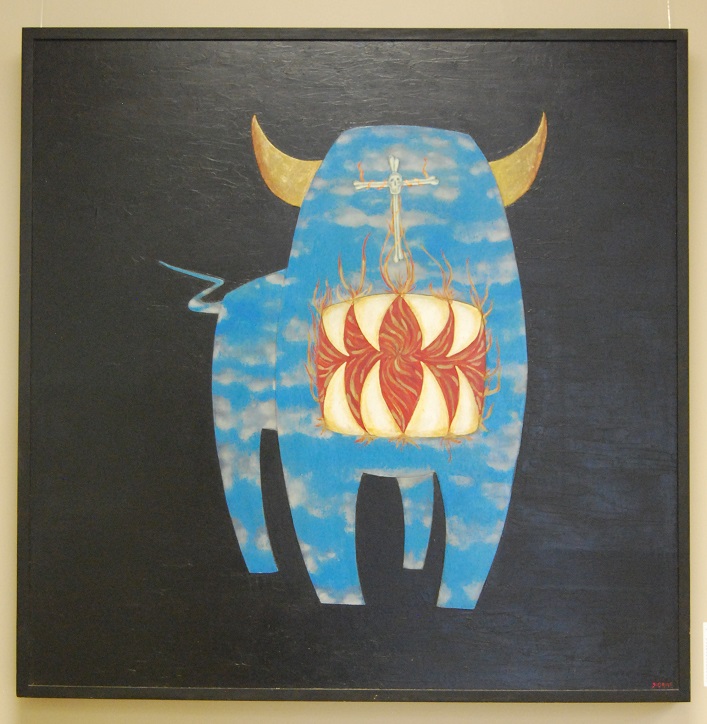 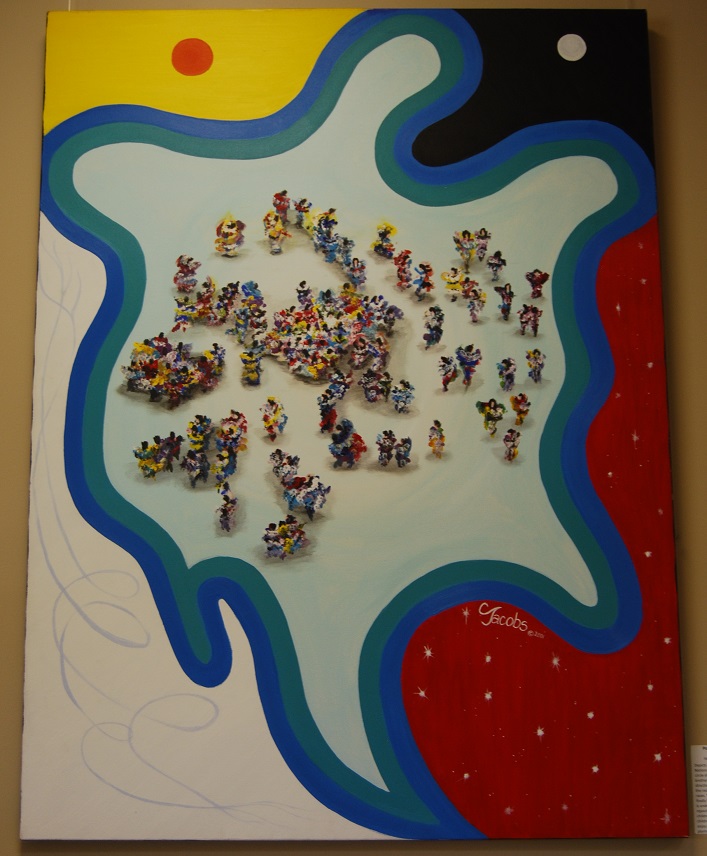 Above: Two works from the recent showing of the Indigenous Spirit Matters private collection at the Canada Summit Centre (supplied photos)

Then Huntsville Art Society showcased local artists from August 16 until mid-November. “It was refreshing and unique local art,” notes Souter. “It’s great to see these groups of established artists mentoring emerging artists, too.”

Muskoka Arts and Crafts will be coming in February 2018 followed by the Muskoka Autumn Studio Tour (MAST) from May to August 2018. “It’s MAST’s 40th anniversary this year so I’m really interested to see what they decide to do,” says Souter.

The MAST show will be followed by the travelling exhibit, Progressions VII, which will run at the Canada Summit Centre from August 15 to October 18, 2018. Progressions VII features Canadian landscape painters. The exhibit is currently on display in the Creative Learning Gallery at the McMichael Canadian Art Collection and is scheduled for stops around the province including Fleming College/ Haliburton School of the Arts.

Partners Hall in the Algonquin Theatre also provides space for local art works, primarily those of members of the Huntsville Art Society. It also hosted Janine Marson’s successful show, Through Tom’s Eyes, and the Algonquin Outfitters Paddle Art Auction, which supported local arts groups include the Town of Huntsville’s reserve fund for the acquisition of public art.

“We could not do this without the participation of the artists’ groups, who are mostly volunteers,” says Souter. “We are providing a service to them by providing a place to showcase their art, but they’re allowing us to fill our space with ever-evolving creative energy that people love. It makes our facility stand out head and shoulders above any other facility of that kind because it’s such a unique concept. We’re all really proud of it. It has worked out as well or better than I ever could have envisioned it.”

Souter notes that it’s part of the Town’s economic development strategy “to support the creative class because it in turn supports tourism activities,” and says that the community should be proud of what is being accomplished with both arts and culture in Huntsville. As evidence, she points to Huntsville’s top 10 ranking for Culture Days activities across Canada for communities of all sizes. “That’s nothing to sneeze at.”