Next year will mark the 100th anniversary of Tom Thomson’s death. Local artist Janine Marson wanted to do something to honour the date, so she embarked on an ambitious project: paint 100, mostly on-location sketches in the same places that Thomson did. The project and exhibition to follow, Seeing through Tom’s eyes: a discovery of truth, light and colour, will be her interpretation of Tom’s work 100 years later.

“As an artist, I find sketches to be the most valuable,” said Marson. “They are something you experienced for yourself. You saw the sunlight, you saw how it filtered through the trees. It’s an experience that can never be repeated. So I thought, I’ll do 100, 8 by 10, oil-on-birch-panel sketches. That’s what Tom did on location, so it seemed fitting.”

As part of the project, Marson has been researching images with the help of friend and fellow artist Terri Howell, who connected Marson with Kevin Clute at the Algonquin Park Archives. “We’ve been given permission to go through their banks of images,” said Marson. “I’m retracing Tom’s steps – doing the research and finding where he went, what kinds of things interested him, and painting it for myself in my own way. So these are not recreations of Tom’s work, they are my interpretations.”

Marson credits Howell with being her “matchstick” for the project. “She was the one who said, ‘Have you thought about doing something for 2017?’ She said she’d help me and she’s been my research assistant. We’ve probably been out to the Algonquin Park Archives at least four times researching images that would give us a sense of where Tom was and what he might have seen, and then seeing where that was (in relation to what’s there now). It’s like being there and going back in time. It’s helping me to have a sense of place.”

She began the project on July 17, 2015 – Healthy Parks, Healthy People Day – and has now completed 23 sketches. Of that first attempt, Marson said: “It’s not a stellar painting but it’s an honest one. That’s what it’s about. What am I seeing that day? What’s the light like? What’s the weather like?”

The project has required her to re-evaluate why she paints the way she does. “I thought this would be good to shake me up a bit. I haven’t worked with oils in 20 years. So it’s the challenge of working in the field with a medium I haven’t been working in that can easily get damaged in my backpack.”

Marson created a foam core box to put wet canvases in so they could be transported back to her studio, but that’s only part of the challenge. She’s had to learn how to work with oil paints – an unforgiving medium – in both the heat of summer and in the cold of winter with snow settling on her palette. And she’s had to tune out distractions like tour buses whizzing by on the highway when the day’s location took her out of the backcountry and into the Highway 60 corridor of Algonquin Park.

When spring comes, she’ll be going to Canoe Lake to watch the ice go out, just as Thomson did. “A couple of locals – Holly Stewart and Mary Dawn King – are excited about the project and offered to take me around and point things out.” And in August, Howell’s daughter Meghan deLagran has offered to take Marson on a guided canoe trip around some of the lakes Thomson frequently painted – her gift to the project. By September, Marson estimates the project will be 90 per cent complete.

In the spirit of her grandfather, she actually intends to complete a total of 110 sketches. “He was very inspirational to me. He always said if you’re going to do anything you should give 110 per cent. So I’m going to do 110 and some of those extra 10 will probably be research sketches – where the Mowat Lodge was, where the Canoe Lake Mill was. They will provide a historical backdrop to the life and times that Tom would have experienced. I’m working on one of the Canoe Lake station now.”

Another inspirational figure in Marson’s life – and one who sparked her determination to be an artist – was Group of Seven painter A.J. Casson. Marson’s parents owned Timber Trail resort from 1965 to 1988 and one day when she was eight years old her father suggested she go down and watch an artist painting on the shores of the Oxtongue River.

I didn’t know who it was. It was just some old guy painting. He was looking up the Oxtongue River painting the scene in front of him and I remember thinking that if he finds my back yard interesting enough to paint then so do I. And that was it – I made the decision then and there to be an artist and I never varied from that vision. That meeting was pivotal for me.

Marson said she still often feels like that eight year old, fascinated by what she sees and what she can paint, and she wants to share it with others. “How cool is it that a lot of these things are still pristine and the way they were in Tom’s time? There’s still this landscape waiting to be discovered. I think the parks and artists are part of that rediscovery for people and I hope that it will be inspiration for people to want to respect it and take care of it for the next 100 years.”

The works of The Group of Seven and Tom Thomson continued to inspire her throughout her arts education. “I had this old poster and I took it with me when I went away to school [Georgian College]. It’s pretty worn but it always meant something special to me and I never knew why. It always reminded me of my backyard (at Timber Trail) and there had always been suspicion that it had been painted outside Algonquin Park.” The painting was Tom Thomson’s Northern River, which historians now believe was painted along a bend in the Oxtongue River. That spot at Timber Trail has been marked by a plaque thanks to Oxtongue Lake for Arts and Culture.

As she paints, Marson is also writing exhibition proposals to find places to display this body of work when it’s complete. The Town of Huntsville was the first to accept her proposal and will be sponsoring a show at the Algonquin Theatre in the summer of 2017. “They are going to use it as an anchor for a multi-faceted event around the 100th anniversary. The details are still in the works but it’s cool that it’s in my hometown but that it’s also going to open it up to visitors who may not get out to Algonquin Park to see these places for themselves.”

Marson has also been talking with both Algonquin Outfitters and East Central Ontario Art Association, via her former boss Ron Murdoch, about creating guided trips for artists to experience painting en plein air.

But mostly she fits in painting for the project whenever she can around her full-time job at North Art Supplies. “I’m getting faster. I just have to pick the light, get excited about it and try to nail it as fast as I can. Everything changes but you have to stay focused on what you were really excited about and capture that moment in time.” 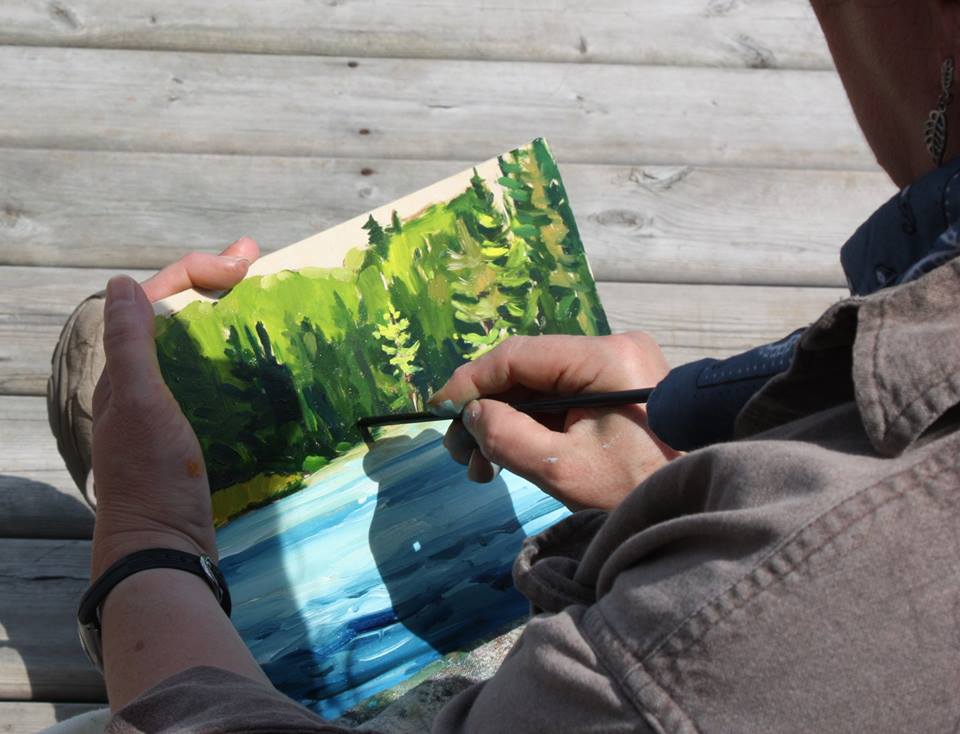 Painting the remains of the Potter Creek bridge near where the old Canoe Lake Mill used to be. Photo courtesy Janine Marson. 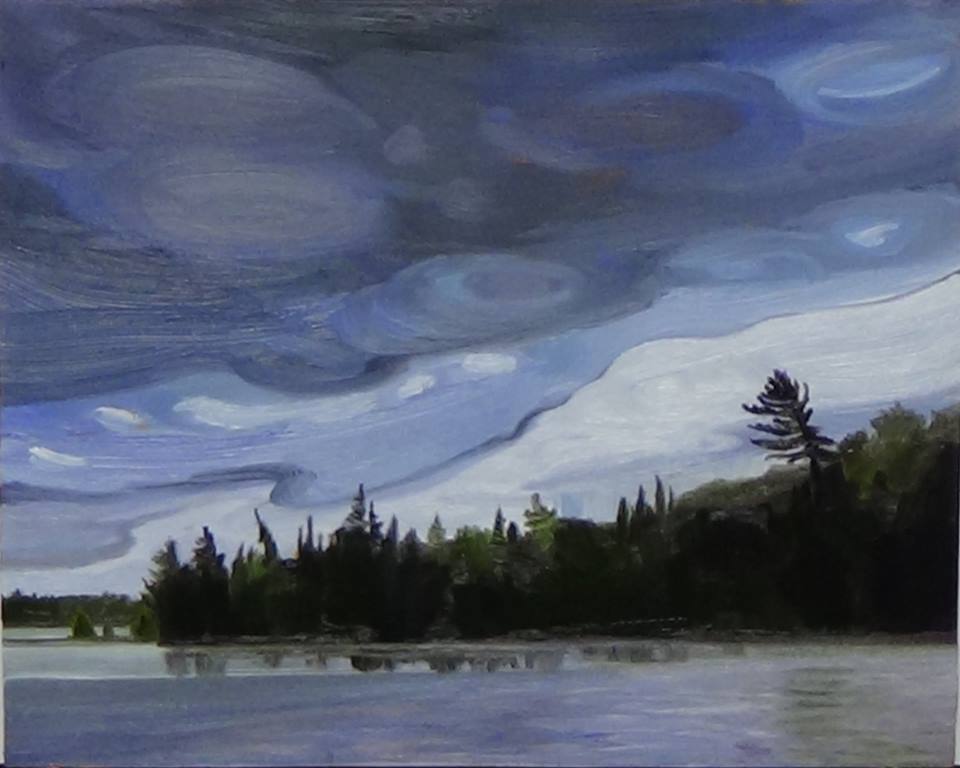 “Praying for a break in the rain, Canoe Lake.” Photo courtesy Janine Marson. 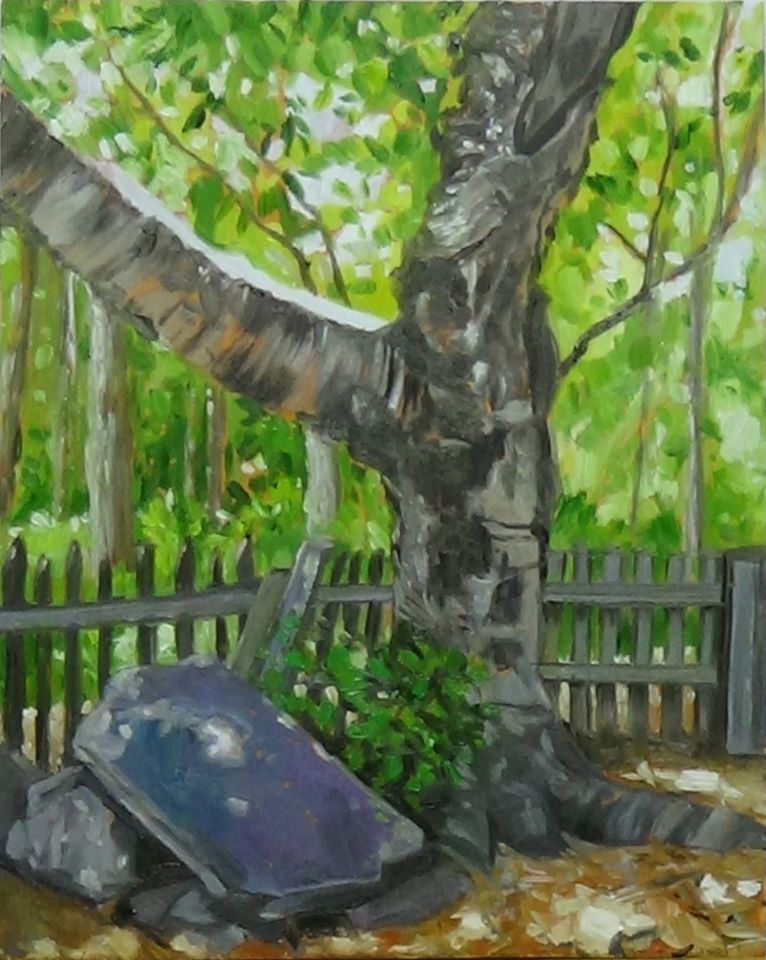 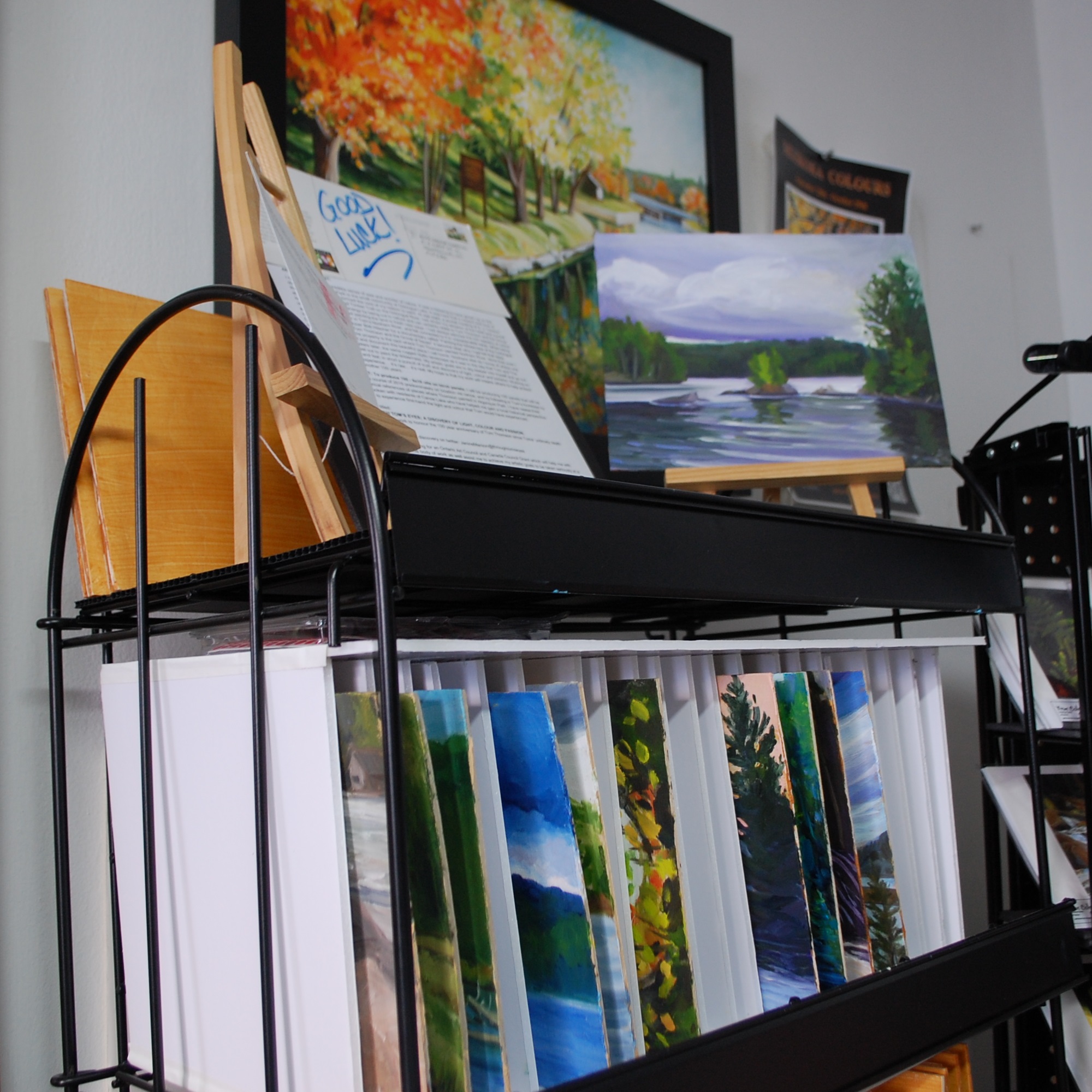 Marson’s completed sketches are housed in her studio to await framing when the project is complete.