You are here: Home / News / With streetscape project scheduled to begin next year, Town seeks input on design

With the construction project to make needed repairs to the aging water and sewer infrastructure beneath Main Street drawing nearer, the Town must make decisions regarding a concurrent streetscape redesign.

Downtown business owners and members of the public were invited to a community information session at Partners Hall on March 3, 2020 to review preliminary streetscape design options and provide feedback to the project’s partners. Anyone who was unable to attend the meeting can submit feedback online at engagemuskoka.ca until March 16.

About 60 people were present at the public meeting, many of them representatives from downtown businesses.

Steve Hernen, the Town’s director of operations and protective services, began the meeting with a reminder about where the project began: with public consultation in June 2018 that led to a design brief created by consultants The Planning Partnership. “That’s the guiding principle for this whole design,” said Hernen. “So when people say to us, you know, ‘why are you thinking of putting trees here? What’s your concept?’ It’s what the people told council they wanted back in 2018.”

EXP, the consultants tasked with bringing the brief to life, have completed about 30 per cent of the design work and are now seeking input from businesses, residents and council.

The goal, added Hernen, is to have a design ready to go to tender in September so that construction can start in 2021. “We do have some tight timelines,” he said. “We intend to be back to council the end of this month with some more information and we intend to be back to council at the end of April. Hopefully, council will be ready to make some decisions and we can move this forward. If we delay this by four or five months, it starts to cause problems for the construction schedules that we have to meet to get the project done in a timely fashion.”

Representatives from EXP presented three design options to council on Feb. 24 (see a PDF copy of the presentation here).  Those options did include price estimates, but for the public meeting Hernen noted that “until we start to narrow these plans down a little bit more, we can’t tell you exactly what different items cost.”

Les Ranta of EXP provided an overview of some of the items the design team was particularly interested in gathering feedback on. Among those were flexible parking—the ability to take parallel parking spots along Main Street and temporarily use those areas for events or seasonal patios—and pedestrian crossings from King Street across to Civic Square in front of the Algonquin Theatre as well as at West Street; ‘Muskoka Moments’ design additions which could include seating, trees and other vegetation; a rejuvenation of Kent Park, at the corner of Brunel Road and Main Street, which could include a water feature, spaces for resting or meeting, and an information kiosk that could be removed during events; and, finally, a new gateway feature at Lorne Street that could be a landmark at the western entrance to downtown.

Downtown Huntsville BIA manager, Morgan Richter, said that the organization will be launching a communications plan and branding strategy before this summer to ensure details about the project are shared with local businesses and residents and that both residents and visitors are encouraged to visit downtown during the construction.

Following the presentation (see a PDF copy of the slideshow here), attendees had the opportunity to view large-scale drawings as well as ask questions and provide feedback to Town staff and consultants. Several members of council were in attendance as well, including Deputy Mayor Nancy Alcock and councillors Dan Armour, Jason FitzGerald, Dione Schumacher, Bob Stone, and Tim Withey. 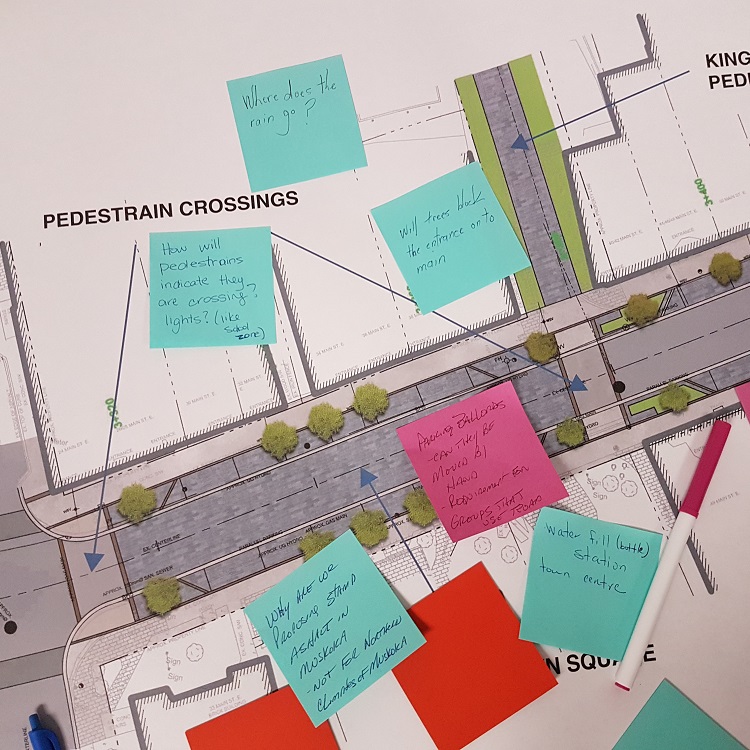 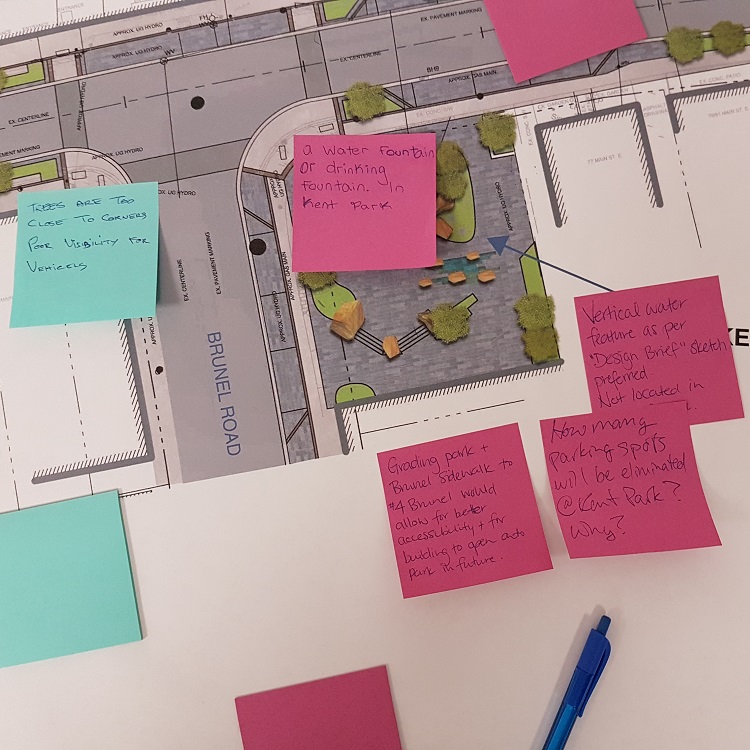 Above: Some of the feedback from information session attendees about the area in front of Town Hall (left) and the corner of Brunel and Main (Dawn Huddlestone)

Parking was a recurring theme.

Hernen noted in his introduction that within a 10 to 15 minute walk of Main Street, there are more than 2,000 parking spots in public lots, private lots, and on streets.

A representative from one local business is concerned about the possible loss of parking spaces in the downtown core through flex parking or a redevelopment of Kent Park.

“A number of the planning elements in the streetscape design include less parking,” said Nate Smith, store manager at Algonquin Outfitters, adding that comparing the proximity of parking to downtown with parking in a city like Toronto and assuming people will get used to a longer walk, “runs the risk of people just disengaging with the downtown area…and especially locals that already consistently say, ‘oh, well in the summer I avoid downtown like the plague.”

Smith said that every parking spot downtown has value to local businesses who rely on that traffic, and the turnover of those vehicles. “So in a 10-hour day, one parking spot will hold X amount of vehicles and on a low estimate that vehicle probably holds two people and they’re gonna spend forty dollars at your establishment on average and maybe another establishment, and when you start adding that up…I think the cavalierness towards just eliminating parking spots for aesthetics is risky.”

Deputy Mayor Nancy Alcock acknowledged that at the very least there is a parking perception problem, compounded by confusion and lack of signage about the parking that is available.

“One of the other things that we are doing and starting to embark on is the whole branding strategy and doing proper signage,” she said. “We’re going to have to look at parking, and whether or not we look at our strategy as how to tell people where to park or do we create new parking, I think that is a bigger issue… We as a council still need to have that discussion.”

She also said she’s heard the message both at council and from the public that the Town needs to “do it right”.

“My sense was that there was a consensus [when the options were presented to councillors]of this is a signature piece for the town of Huntsville. So we don’t want to scrimp,” said Alcock, adding that she heard a similar message from some of the attendees at the public meeting. She acknowledged that a revitalization comes at a price, and that council hasn’t yet decided how much it is willing to commit to the project. She also said that she’d be reaching out to business owners. “They’ll want to know that, at the end of the day, this is going to be great for their business, because it’s going to be pedestrian oriented.”

Councillor Jason FitzGerald noted some of the inconvenience that the project will create, but said that it has to go ahead.

“We know there’s going to be some traffic issues, some parking issues, but…we have to do it,” said FitzGerald, referring to the needed repairs to the infrastructure below Main Street. He added that if it were left to the point where emergency repairs were needed, “then you have no control over timing, no control over price, and no control over the finished product. If you have to do it piecemeal, you end up with an inferior result. It isn’t the first time this has had to happen on a main street. It’s something that needs to happen and hopefully we can make it work for everybody.”

“I think obviously our members are concerned about the challenges the streetscape is going to bring in front of their businesses, especially during the summer months because that’s what carries a lot of us through the entire year,” she said. “But I think, for the most part, we’re very excited to see the downtown get this revitalization… Think about how many more people are going to come to our downtown. So the fact that the District has to go under the roads anyway, why not take advantage of that.”

Hunt said that communication will be key for both businesses and visitors, “so when it’s all said and done, and it’s beautiful, the storefronts are still full.”

The BIA is planning events to help draw people downtown during construction. “We want them to come and see every step of the journey with us. It’s going to be business as usual,” said Hunt. “It’s something exciting and something to celebrate. We have a lot of old pictures in our stores and what our buildings looked like 50 years ago. It’s going to be neat to see the before and after as this happens, too.

“I think this is great for our town and for our community… I think it’s something to get behind and be proud of—that this is happening and that the Town is willing to put in the money to invest in our community.”

For more information on the project, and to complete the survey, visit engagemuskoka.ca.