You are here: Home / Commentary / The world post-pandemic | Commentary

By Ross Maund and Dave Wilkin

The COVID-19 pandemic, part three of three: the world post-pandemic

The big challenges coming are shaped by a variety of circumstances over the past decades and now heightened and accentuated by the current pandemic. These issues will alter our lives far beyond what we could have contemplated as we entered a new century twenty years ago. In recognition of many significant changes that have been amplified by our COVID experience over the past months, we offer seven significant items underway even before this pandemic but are now accelerated.

Many politicos based their decision-making and respective actions on data, recommendations from public health authorities and academic modelling that was, in hindsight, insufficiently accurate for optimizing the way forward.  As we covered in Part II, improved data relevance, veracity of selected narratives (WHO’s support of China), insufficient preparedness, significant shifts by pubic authorities and a degree of partisanship.

Earlier recognition and reaction to the virus’ impact in high population density zones and within long-term care resident populations could have significantly reduced losses of life. First advisories to lock down the entire country versus immediate focus on the most vulnerable segments would have been more logical. The long-term implications to our care systems, already underfunded and over stressed, remain unclear, with ongoing significant impact to long-term care well into the future. Time is of the essence in assessing and responding to making critical changes and preparedness while the world awaits a vaccine solution.

The world is at the end of a multi-decade economic expansionary cycle. Since 2008, real productivity growth has declined, recently turning negative (becoming unproductive). Unprecedented levels of financial stimulus and the low cost of capital since 2008 was soaked up by company stock buybacks and dividends, at a time that investment in growth-oriented initiatives, building capacity and enhancing productivity should have been prioritized.

The final decade of this economic expansion was created by the low cost of borrowing—productivity enhancement has been all but void. Historic areas that delivered better return-on-capital such as emerging /developing countries have declined, signalling the long-cycle expansion has run its course. Canada’s labour productivity growth has been trending down for two decades, and our real GDP growth per capita has declined 15 per cent over the last six years. Multi-decade economic policy priorities and decisions have left Canada in a weaker position as we are now in recessionary times.

The world is awash in debt—the outcome of decades of misguided fiscal stewardship. By the end of 2019 total global debt which includes government, business and personal debt, reached over $257 trillion USD (325 per cent of the world’s GDP).  As of April 10 another $11 trillion of direct national government spending (14 per cent of global GDP) has been added in a bid to mitigate the COVID economic shutdown impacts and with unchartered consequences. This recession will add at least 20 percentage points to total global debt before potential recovery.

Canada’s total debt burden is now one of the largest in the G20 at over 350 per cent of GDP (prior to this current recession) and may easily top 400 per cent yet. Traditionally these types of ‘debt bubbles’ have tended to have consequences that are painful for populations, that cause the imposition of stark decision making that happens quickly – there is no reason to believe that this time outcomes will be different, especially given the all-time high magnitude of current debt. 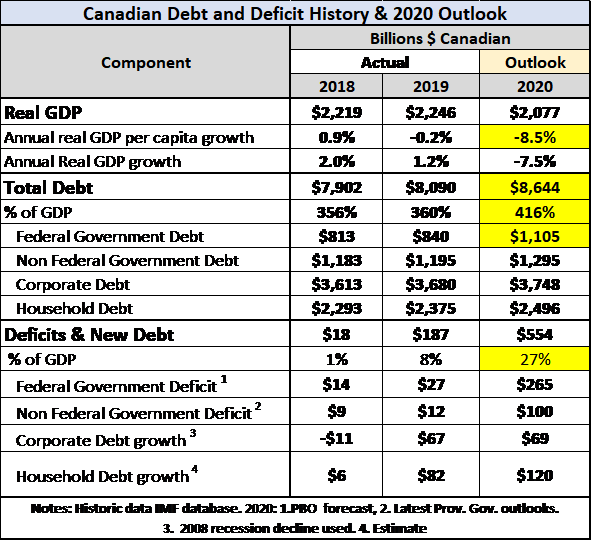 The Canadian federal government’s accumulated debt from endless annual fiscal deficits prior to COVID-19 was approaching $750 billion. Post-COVID this accumulated federal debt burden will likely exceed $1 trillion.  Yet with such high levels of government spending over the past decade, little tangible infrastructure was built.

There is likelihood of Canada needing to increase its spending on social, health and other government-sponsored programs. Given the economic backdrop, funding needs in health care, expansion of necessary social programs, and improving the country’s global competitiveness will need to be delayed to future administrations and perhaps generations, “kicking the can down the road” again. Governments and businesses have unfortunately squandered the opportunity to ready themselves in advance of this downturn and not following the long-standing adage of past generations: “save during the good times as rainy days always come”.

The battle between traditional workforce and expanded automation is over. A byproduct of this pandemic is clarity of governments and businesses seeing benefit and ability of reducing worker headcounts through expanded automation and use of new technologies. Advanced robotics, digital communications, artificial Intelligence engineering, and ‘Big Data’ have moved with speed into the mainstream. The use of advancing technologies is relatively positively embraced by the population at large. Mechanization operates effectively driving productivity and accuracy of function in many sectors already. It operates unconditionally, including when people are self-isolating and has the capacity to function 24/7.

The acceleration in product development, customization, and adaption into work and leisure markets is moving at warp speed. Smart technologies enhance productivity, assure consistency, and allow more flexibility of use—mechanization will further decouple industries from human constraints. In the near future, COVID shutdowns will likely have displaced a total of more than 305 million workers globally, causing significant social dislocation, possibly overwhelming governments’ capacity to appropriately respond. Many of the lost jobs are forever lost, as the long-term impact of these technologies on business and society accelerates. Traditional blue and grey collar workers, mid-level white collar personnel, and the size of the executive office will all be impacted in the decades ahead. Machines and technologies have won the battle.

Resiliency, preparedness, and access to locally manufactured critical requirements for future emergencies will become higher priority. Nations will explore new industrial priorities that include the repatriating of global supply chains, especially in the manufacturing of products designated as essential.

Medical devices, healthcare emergency supplies, biomedical and pharmacological supplies will more likely be made in home countries or in trusted partners’ nations. Industries and technologies that pose potential security issues as with the ongoing concern over Huawei’s 5G technology will potentially continue to be under greater oversight with national and sub-level governments imposing decisions.

Manufacturing offshore to lower costs and improve business margins will be increasingly scrutinized against national strategic considerations. A rebalance is in our future. Urban planning specialists and businesses may start to rethink the traditional advantages of high-density urban housing/office towers versus pushing to lower density/distributed environments with all the inherent social distancing/resiliency advantages. This shift could benefit lower density communities on the periphery of main metropolitan centres—perhaps even Muskoka.

The demise of the USSR and the lessened influence of long-standing European powers over the past 30 years left the United States as the dominant global force to establish and maintain the world order pos-World War II.

Increasingly, the U.S. has been reticent in its desire to lead and maintain its influence around the globe. The ‘new’ China emerges as the up-and-coming global rival to the U.S. China’s ambitious multi-trillion dollar plan to boost its worldwide reach through massive state-funded infrastructure investments in rail, shipping lines, roads, ports, and energy is unprecedented and dedicated to strategically position their influence worldwide. Following the old Silk Road doctrine, a newer ‘Belt and Road Initiative’ (BRI) now crisscrosses from Asia to Africa, Europe and beyond. China’s long-term strategic intent is to replace American global influence and in so doing establish a new world order, one that aligns and benefits the world’s present number-two superpower.

GDP per capita comparison of China to the U.S. understates the power and potential supremacy of China’s future long-term vision and ambition. Primacy of its national interests with global goals of economic dominance and powerful influence in the reshaping of world institutions such as the U.N. including the WHO, WTO, and others. COVID has only hardened the battle lines. Our children may, but our grandchildren will likely, witness a China-dominated world order.

Canadians should expect and demand more from leaders. We should identify our vulnerabilities that are so evident from our shared COVID experience. Let’s use this as our lightning rod for reflection and then prepare for the changes to come.

Watch for our next article when we return to our Big Challenges series, examining receding globalism and the new world order to see how they may impact Canada and Muskoka in particular.