Every time I cross the threshold into 7 Main Café, (originally Gledhill’s Jewellery Store), and step onto the old wooden floor, I am transported back in time. I am in Tricky’s candy store again. I’m sure they sold other merchandise, like magazines and so on, but my focus was always on the huge array of candy right by the door to the left.

Although I’m not particularly fond of the taste of black licorice, my most vivid memory is of the black balls, five for a penny. I would pop one into my mouth, only to remove it after a couple of minutes to discover what colour was under the black…pink, then purple, then blue, and so on, until at the very middle was a little tiny seed. (I know now that it was an anise seed, the healthy part!)

Also for a penny, were three jujubes, “black babies”, gumdrops. A piece of Double Bubble gum was two cents, as was a black licorice cigar or pipe, a pair of red wax lips. A box of Popeye cigarettes cost five cents, as well as a box of Cracker Jacks (caramel popcorn), and there was a prize inside. Likewise, there was a box of Pink Elephant popcorn.

If we didn’t have a nickel with us, my best pal, Susan Kellock, and I would stop in at my dad’s jewellery shop. He was always a soft touch, and we would skip off happily, money in hand.

I don’t even remember my first visit to Tricky’s, that’s how young I was, but it was so very close to Huntsville Public School, it became a tradition for so many of us kids to frequent the place with a nickel which would buy us a paper bag chockablock full, packed by the very kind woman who served us.

It seems that every shop on Main Street had its specialty.

Parker’s Bakery, just down the hill from Tricky’s (where the CIBC is located now), for me specialized in Chelsea buns, and no more did I enjoy them than at Camp Onawaw where our very special Sunday breakfast consisted of fresh oranges, bacon, and Chelsea buns from Parker’s with real maple syrup! In grade seven, at Huntsville Public School, our field trip for the year was not to Ottawa or Quebec City, not even to the Toronto Zoo, but to Parker’s Bakery, a mere block from our school. Nevertheless, it was very special to us to get to witness how all the wonderful baked goods were created!

Further along Main Street, where Hutcheson, Reynolds and Caswell Insurance Brokers is, was Boley’s Bakery. Opened in 1940 by brothers Albert and Ting, the bakery was the best place to savour milk shakes, cream puffs, and chocolate eclairs. As a young child I loved to go to Boley’s with my mother where she would meet a friend for coffee in a separate section of the bakery. I was allowed a cream puff, which I nibbled on so very slowly so as to savour every single small bite, saving the whipped cream, the best part of all, to the very end. 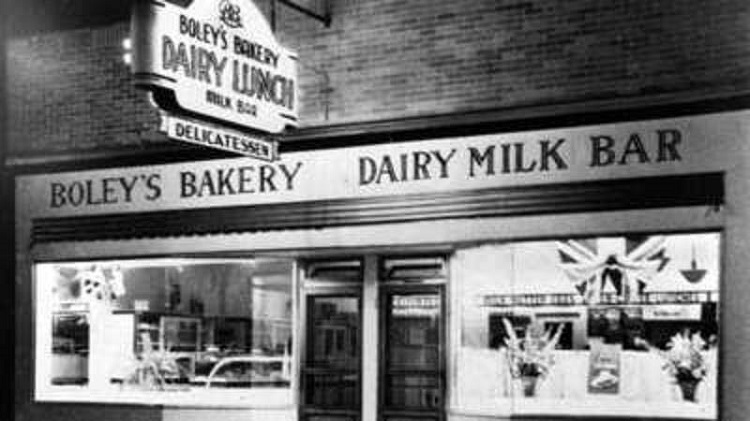 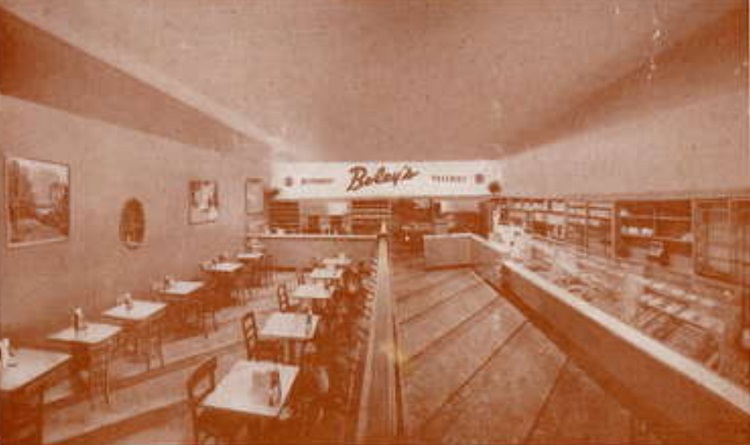 The Co-op Dairy Bar was beside where the Capitol Theatre is now, in the building that is Gus & Gigi’s Pet Shoppe. A Co-op Dairy ice cream cone was second to none.  However, if we wanted an extra added feature of a bit of car grease, we could get it at Cassidy’s Garage from Earl Cassidy’s thumb as he pushed the ice cream into the cone. It was a very convenient spot to pick up a five-cent cone on our way home from just about anywhere!

From the candy shop to the dentist! There were three dentists in town when I was a kid. My dad went to Dr. Ted Fisher, whose office was above the location of Plum Loco. He never paid for his dental work. Instead, Dr. Fisher would pick out a piece of china, crystal, silver flatware, or jewellery from my dad’s shop, Briggs Jewellers. They were great friends and that’s how it worked for them.

The offices of brothers Dr. Frank Rogers and Dr. Ross Rogers were situated where Seng’s Authentic Thai Cuisine is. I was absolutely terrified by Dr. Frank Rogers; not his fault. He was a very kind man. It’s just that his white dentist coat had splatters of blood on it, as did his glasses. There was a dental chair and in front of it was a tray holding all his equipment…lots of lethal-looking sharp things. Then there was the checkup. Every single time I went he found a cavity. (And therein lies the connection with Tricky’s!) The water-powered drill had not yet been invented, so it was the jack-hammer drill that he used. The needle he used to freeze my gums was very, very long, and he would shoot the liquid into the air in front of me, just to make sure it was working. Even by then my back was arched and my knuckles were white from fear. That was nothing compared to the sound of the drill…first the largest drill bit working down to the smallest until, finally, that stage was completed. There was such relief once that “silver” filling was in place, and I was free until the next terrifying episode. The real bummer was that my friend Susan Kellock, who ate every bit as much candy as I did, never had a cavity! And I still balk at the smell of cloves!

The invention of that water drill, in the late 1950s, was so exciting for me that it was the subject of my Grade 8 speech. I am so very grateful now to visit a dentist’s office where the first thing I see at the entrance are two beautiful sculptures created by Brenda Wainman Goulet, one on each side of the door. I am greeted with big smiles at the reception desk, a gentle caring hygienist, and/or a dentist who is sensitive to my ingrained fear and puts me at ease right away. Funny, without Tricky’s candy store, I can’t remember the last time I had a cavity!