You are here: Home / Community / Teacher exchange takes local family Down Under for a year

Mara and Andrew live with their two daughters, Joan (age 11) and Ellie (age 9), in Port Sydney.  Andrew is a teacher at Saint Mary Catholic School in Huntsville and is currently on a teacher exchange in Australia. This is the first in a three-part series about the exchange. The second story will be the Hill family’s account of life in Muskoka, followed by the story of the two families meeting in Vancouver at the end of the exchange.

“Do you have bears in your backyard?”

This was one of the first questions the Hill family asked during our initial Skype conversation. It was met with, “Do you have sharks at your beach?”

The answer to both questions was, “Not likely.”  Once our biggest predatory fears were laid to rest, we began the work of discussing what exactly it would mean to swap jobs, houses, communities, loved ones, and countries with a family on the other side of the planet.

Exchanging lives with complete strangers requires a leap of faith. For Andrew and I, the draw to explore something new, to escape monotony, and provide our daughters with a unique life experience gave us the motivation to take that leap. However, the process of arranging a teacher exchange is not an easy one.

We completed a lengthy application with the Canadian Educators Exchange Foundation in January 2018. We were told it could take months before we had any news, so we were surprised when an email came late February suggesting the Hill family as a potential match. It was exciting to learn that Kathryn (the exchange teacher) and her husband, Shannon, have three children around the same age as our daughters. Within 24 hours, both families had reviewed each other’s application and agreed to the swap. It was both thrilling and terrifying to realize a dream we had discussed for several years was actually going to happen.

Close friends and family can attest, the months that followed were some of the most stressful we have faced. I often described the process as akin to moving, changing jobs, and planning a huge holiday all at the same time. Over the next few months we enjoyed getting to know the Hills over Skype; it was a disappointment to realize our friends, family and colleagues would have the opportunity to forge closer relationships with them than we ever would.

On December 31, 2018, our family boarded a plane for the longest flight of our lives, all of our belongings for the year crammed into four large suitcases plastered with Canadian flags. After over 30 hours of travel, we landed at the Hills’ doorstep.

Newcastle, or Newy as the locals say, is a lovely coastal city just 2.5 hours north of Sydney. During our first few days here anyone we encountered assured us “it isn’t usually this hot” (highs of +40°C). Ironically, the Hills arrived in Muskoka during a cold snap (lows of -40°C) and were assured by locals that “it isn’t usually this cold.”  It appeared we had not only swapped lives, but also extremes—a difference of 80 degrees.

There have been many adjustments and much to learn about Australian life and culture. In Muskoka, Joan and Ellie attend French Immersion; however, in Australia, they are attending St. Joseph’s Catholic Primary School where Andrew teaches Grade 4. The school has a unique arrangement with classrooms in separate buildings and pathways winding through the school grounds. Also new to the girls was having to wear a uniform, which is required by all school children in Australia. 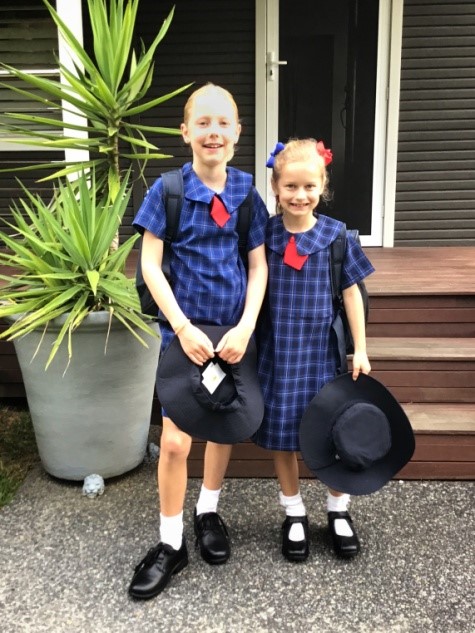 Joan and Ellie on their first day of Aussie school (supplied) 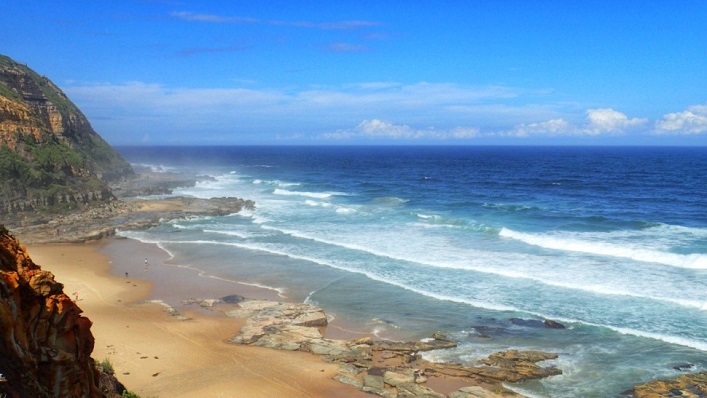 A beach in Newcastle (supplied)

Above: Joan and Ellie on their first day of Aussie school (left); and a beach in Newcastle (supplied)

The language itself has been an adjustment; markers are textas, water fountains are bubblers, cantaloupes are rock melons, and a pick-up truck is a ute.  Australians also love to shorten almost every word—”afternoon” becomes “arvo”, and “thank you” simply becomes “ta”.  Of course, we have also adjusted to driving on the opposite side of the road—driving on the left side now feels normal…just in time to head back to Muskoka.

I have taken a year leave from my Muskoka job in children’s mental health and I am working part-time at a café, and taking some shifts as a teacher’s aide. Working at a café has been nothing like I imagined; Australians take their coffee VERY seriously. There is no “double-double” here—each coffee is made to order and is espresso-based. Coffee here is both a science and an art; I attended barista training and I am still learning how to master the “heart art” created with milk foam. I must say, Australian coffee is remarkable, but it also comes with a higher cost (expect to shell out $4.50 for a mug).

Our love for Muskoka lakes has been replaced with the ocean, and we have enjoyed living so close to the beach. I particularly love the Ocean Baths, a concrete sea-water pool that sits near the edge of the ocean. (I won’t lie…part of what I enjoy is the knowledge that it is shark-free!)  The ocean here is powerful; nothing like what we have in Ontario. We have learned about ocean safety and how to spot a rip (a strong narrow current that moves water out toward the ocean). Beach life seeps into Australian culture; when we first arrived the girls were astounded to find that some people opt to grocery shop in bare feet!

We have had many adventures and road trips during our time here. Perhaps most memorable was our time on Heron Island where we snorkeled with sea turtles and were captivated by the Great Barrier Reef. We rented a 4WD vehicle and drove down the beaches of Fraser Island, we camped in the rainforest, explored the sights of Sydney and Melbourne, and drove along the iconic Great Ocean Road.

Other memorable moments include a time when a kookaburra (a common Australian bird) snatched a sausage right out of Ellie’s hand, experiencing 100 km/hr winds atop a lighthouse on Shipwreck Coast, and sandboarding on the dunes (not unlike snowboarding). There is so much to see and experience, so much varied and breathtaking geography. 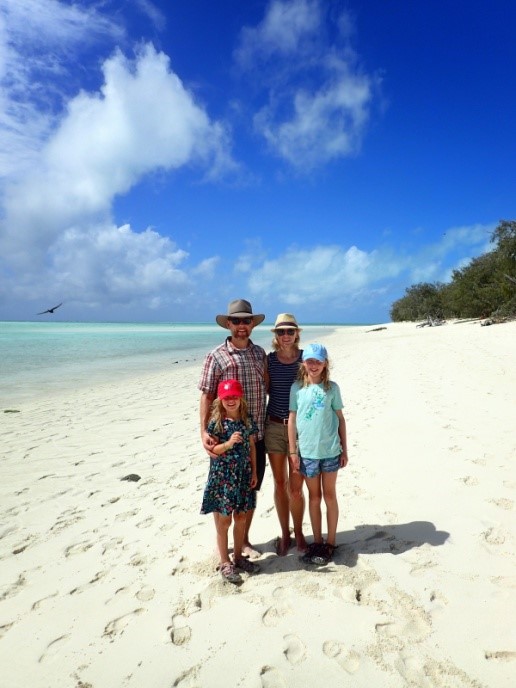 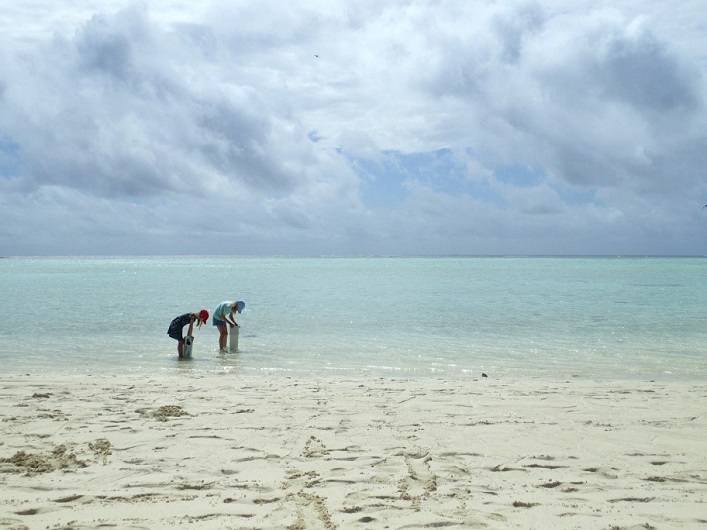 Reef walking on Heron Island, exploring many creatures of the sea (supplied)

Above: The Hallman/Foxcroft family on Heron Island

Of course, we miss home and all our friends and family. We watched the Raptors win the championship over a morning coffee, and we celebrated Canada Day with Australian friends. Although we have enjoyed camping in Australia, we miss canoe tripping on Ontario lakes—something we have done every year with our daughters since they were born.

Do we miss the snow? The girls and Andrew say yes, but I say no!  I have enjoyed how easy it is to be outdoors and active here—even on “cold” days it is the perfect temperature for a walk or run. We have enjoyed participating in several local Parkruns, and were so excited to hear Huntsville has joined the global Parkrun community; we look forward to running at Avery Beach when we return. I have braved the Ocean Baths during the winter months—with water temperatures of 15°C it is quite invigorating!

Our time in Australia has been life changing—it has allowed me to reconnect with a part of myself that I long forgot about before I became a busy Mom. Andrew has been pushed out of his comfort zone; he has added new skills and knowledge to his teaching repertoire. The girls have stepped up to the challenge of making new friends and navigating the unknown; they have tried new foods, and new sports (surfing, net ball, footy and cricket). The time we have had together as a family has been invaluable and we have adopted a new family mantra—”say yes” to as many new experiences as possible.

Although our time here is coming to an end, we still have a number of adventures on the horizon before we head home. You can check out our Aussie adventures on our family blog, Trading Bears for Sharks.