Keep two fully functioning acute care hospitals in Bracebridge and Huntsville – that was the message the 16 speakers delivered to the board and administrators of Muskoka Algonquin Healthcare (MAHC) and the Capital Plan Development Task Force at a public meeting last night.

The task force was appointed by the board of MAHC to examine and make a recommendation on a future hospital model. That recommendation is expected sometime this spring. In the meantime, the task force held a community meeting at the District Municipality of Muskoka council chambers in Bracebridge on Thursday to gather input from the community.

“The best model for the redevelopment of our hospital is two full acute care hospitals. I’m not talking about an A site and a B site. I’m not talking about an inpatient and an outpatient site. I’m talking about two full acute care hospitals,” said former Huntsville Councillor and hospital board member Sven Miglin to applause from the audience. Miglin said in that model the two hospitals would have full emergency, diagnostic imaging, surgical and obstetric services as well as acute care beds. “Certainly there would be services that would be single sited. We did it six years ago when I was on the board, we’re doing it now, we’ll do it into the future.”

He called for a major redevelopment of the two sites, which he said can be done in phases according to future changes in health care and community needs and current travel times for emergency care will not be impacted.

Concerns with distance and travel times worried many who spoke that evening.

Marcia Mackesy spoke to an observational study conducted in the UK, which concluded that a 10 km increase in straight line distance, with non-cardiac emergencies, increased absolute mortality rates by one per cent . “So let that resonate for a second. From Huntsville to Bracebridge its 36.8 km, therefore if my child was to have an emergency you are increasing his or her risk by 3.7 per cent, if there is only one acute care [hospital]here in Bracebridge. To me that’s unacceptable. To the residents of Burk’s Falls, the distance is 73.6km, that’s [a]7.4 [per cent]increase in absolute mortality. That’s huge… I know they’re statistics, but the bottom line is it comes to real people. It comes to families and it is a life or death situation at some point.”

Bella Lake resident in the Township of Lake of Bays, Mary Spring, provided those present with a personal anecdote. She said her husband had required major surgery at Toronto General Hospital. He was released last weekend and a complication occurred and he required emergency treatment.

“My brother-in-law and I decided to take Don [her husband]to the Huntsville hospital truly believing that time was very, very important. The trip along Limberlost Road and Highway 60 was nail-biting, but we made it. We sincerely appreciated the excellent care that Don received from the doctors and nurses in Huntsville. I don’t even want to think what could have happened if we had had to drive to Bracebridge,” she said.

I believe I’m speaking on behalf of all the seasonal and full-time residents of Lake of Bays, Dwight, Dorset, the Algonquin Park region, but I also know I speak on behalf of residents in Port Carling and Windermere that we need an acute care hospital in both Huntsville and Bracebridge. Mary Spring

The economic impact of taking a hospital out of a community was also top of mind for many who spoke, citing job loss, a decline in per capita income, businesses relocating closer to hospitals as well as doctors, specialists and ancillary health care service providers in need of diagnostic equipment to practice their field also leaving the community and relocating closer to a hospital.

“There is absolutely no doubt in my mind that most people and businesses considering a move to a community would prefer and choose that same security of a fully active acute care facility. If our town loses its hospital, not only will our community members suffer, our economic well being absolutely suffers too,” said Jenny Kirkpatrick, the wife of a surgeon at Huntsville hospital, a hospital which she also attributed to saving her life.

She urged the board and task force to be more transparent, as others did that evening, and to take a close look at maintaining two acute care hospitals in the community, rather than building a new one somewhere in-between.

“It probably seems cheeky of me to be asking for comparative studies of potential costs, when you have already told us it’s too expensive but I, and I am not alone, haven’t always thought that you have listened respectfully or been entirely upfront with us.” She backed up her argument by noting that meetings held in the past have often been poorly advertised and held when many in the community were on holiday. “And where there’s poor attendance, it allowed you to assume there wasn’t interest. You’ve had meetings where you presented your ideas and then did not permit open questions from the floor, instead we were directed to various substations so that not everyone was in the same conversation,” she said to applause.

Kirkpatrick also criticized the fact that the meeting was held in Bracebridge, which she said made it less likely that there would be a good crowd from Huntsville. “Surely it would’ve been respectful to arrange a meeting in Huntsville also… especially when there is already rampant paranoia in Huntsville that Bracebridge is going to get the acute care facility. You’ve produced a survey, again poorly advertised, offering ill-defined choices. In the press you admitted that even you weren’t sure, weren’t clear of what you meant by two sites, non-status quo, and yet we were asked to make decisions between this nebulous idea or a single new facility or a two-site setup, one offering basically chronic care and the other active surgical care. You presented these in the full knowledge that what… both communities really want is to keep our own facilities.”

Kirkpatrick and others suggested that the deamalgamation of the two hospitals should be considered.

“Would we be more likely to receive adequate Ministry funding if there are again two separate small hospitals, rather than one geographically divided medium hospital? Can we please explore this option?” questioned Kirkpatrick, concluding: “Every year there are a certain number of community members whose lives are saved solely because we have a hospital nearby. That’s a fact, either hospital could give stats where a few minutes more of travel would have meant the death of a patient. I’m wondering how many more lives we are prepared to lose so that we can have a shiny new hospital removed from where we live.”

Former politician and Lake of Bays resident Dan Waters, who said he now lives in Bracebridge, asked why the same question is still being asked about the future of hospitals in the community.

“There is no doubt that one site is a fixation with this group,” he said, suggesting that perhaps the hospitals should disband MAHC and go back to having their own boards. “We no longer have a public board that represents people of our area. People are vetted first to make sure they agree with the current direction of the hospital executive, which is one site not the status quo,” said Waters, who noted that most of the administration lives in Huntsville and suggested that Bracebridge would lose their hospital. Others, like Bracebridge resident Bruce Kruger, who said he has family in both communities, ultimately suggested that if two hospital sites cannot be maintained, then the location should be Bracebridge, to jeers from some of those present.

David Wilkin, a retired Huntsville resident and past hospital board member, reminded those present that “fundamentally if we divide, we lose. If we stand together we win,” to applause from those present.

We don’t want a civil war of north versus south in Muskoka. David Wilkin

He also urged the community to come together and urge the Province to properly fund medium-sized hospitals. “Let’s not hide behind the funding formula as a reason that we can’t have two hospitals. It’s nonsense,” he said.

Ontario Health Coalition Executive Director Natalie Mehra also spoke to the task force saying the drive to replace two hospitals with one hospital will result in cuts to global funding and actual cuts to services.

“The facts do not support the notion that one hospital would be bigger or have more services than the two existing hospitals in fact, quite the opposite.” She said Ontario has had the largest experiment with hospital amalgamation and closures and service consolidation of anywhere in Canada. “The evidence actually shows that the costs increase as a result of the service consolidations in hospital amalgamations.”

You can find more information about the organization here.

The 16 speakers came from various locations and backgrounds and task force chair Cameron Renwick said he was pleased with the turnout. He also said the 40 written submissions would be compiled for the task force’s review. The meeting was supposed to be webcast, but there were technical difficulties with the sound. Renwick said people could view the archived footage of the meeting here.

“The task force I believe has listened and we are going to certainly take all the comments back and I believe everyone will spend the time that we need to contemplate all that’s been told to us,” he said. 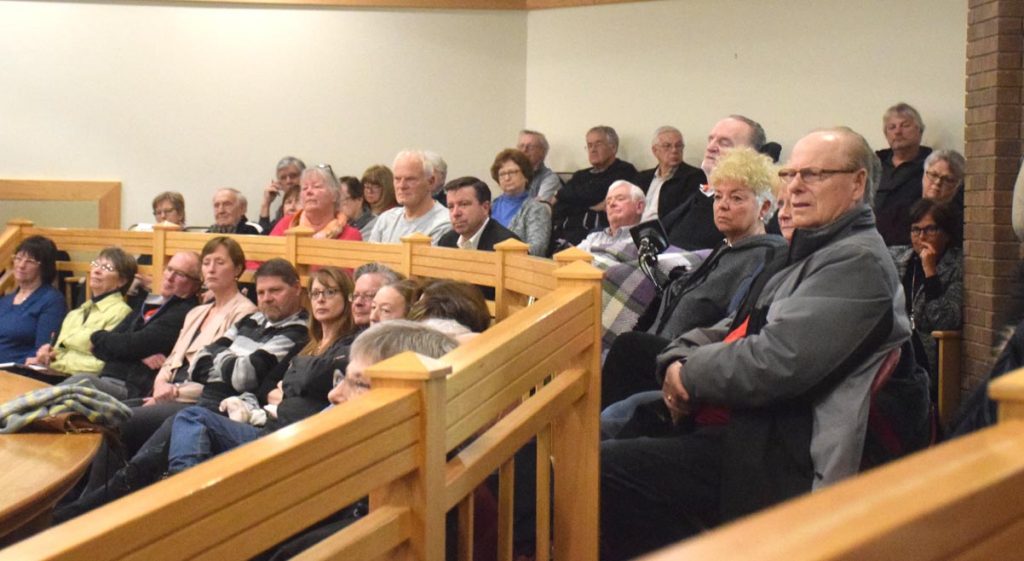