You are here: Home / News / Snoop Dogg concert-goers left standing in the rain for hours

Many of the people who attended the Snoop Dogg concert held at the Canada Summit Centre over the May long weekend are saying they did not receive the experience they paid for and they are looking to the event planner, Cabin Media, for an apology, an explanation and compensation.

Attendees took to social media almost immediately after the concert ended to complain about a litany of organizational problems, the worst of which left them standing in the rain for hours, thereby missing a lot of the concert.

A Facebook group called #boycottcabinmedia was formed after the Huntsville concert when attendees became frustrated by Cabin Media’s lack of response to emails, Facebook posts and messages. The Facebook group blames Cabin Media for what they are calling gross mismanagement.

Danielle Ledo is a member of the #boycottcabinmedia Facebook group. She is from Mount Forest, Ontario. When tickets went on sale she bought two VIP floor tickets for $180 each. It’s a 2.5-hour drive from Mount Forest but she and her partner arrived before 5 p.m. to claim a good spot in line so they could get close to the stage when the doors opened. Cabin Media had advertised that doors would open at 6 p.m., that the concert would start at 7 and it that would end at 11:30. 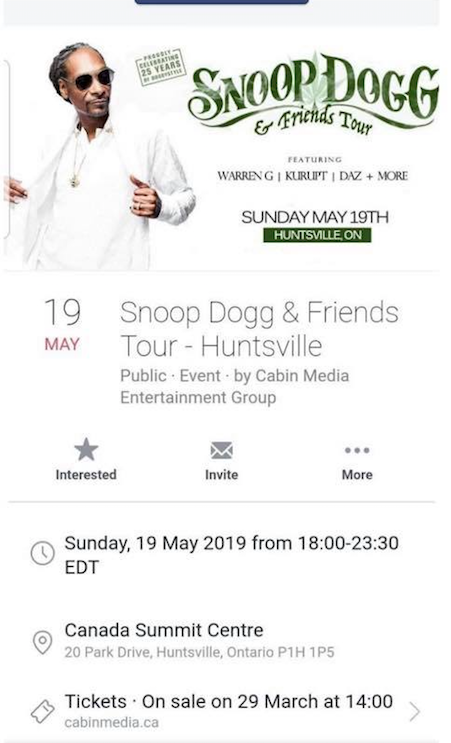 However, the doors did not open at six. Six o’clock came and went. So did seven o’clock. A long line of people were still standing outside in the wind and rain when the first opening act took the stage. Ledo says they were told the floor wasn’t ready. “People who were inside already were saying that there was still a forklift on the floor at 7:30 moving stuff around in front of the stage while the artists were performing.”

Ledo says they finally got inside at 7:30 and it was utter chaos. “The security was a mess,” she says. “We could have just walked by the security if you weren’t honest. We did go through security but they told us we still couldn’t get in, that the floor still wasn’t ready.”

Ledo says they were finally allowed onto the floor just before 8 p.m. They had already missed the opening acts but she was trying to make the most of a bad situation. “I thought, okay, stuff happens and it sucks but the concert is supposed to go on until 11:30 and I’m here for Snoop Dogg anyway so, okay. Then, at 9:30, all of a sudden all the lights came on and that was it. It was over.”

Ledo says she couldn’t believe it. They had driven all the way from Mount Forest, stood in line in the wind and rain for almost three hours, spent $360 on VIP tickets and another $200 on a hotel, and did not get what they were promised. She took to social media and started posting comments and messages on Cabin Media’s Facebook page, hoping to get an apology and compensation. Ledo says the company was totally unresponsive to the Huntsville audience. “I noticed comments being hidden and being deleted. I wrote them a message. They haven’t responded. I emailed a couple of times saying, you guys didn’t give us what we paid for and I think you should compensate the people who missed the whole first act. They didn’t respond.”

Huntsville’s Janet Markham bought six tickets for the concert, saying that having Snoop Dogg in Huntsville “was a super unique experience” that she was not going to miss.

Markham says her group arrived at the concert twice. The first time they arrived was at 6:45 p.m. There was a huge line up and it was pouring rain. “We drove through the high school parking lot and turned around and went back home because we thought there was obviously going to be a delayed start because people weren’t even inside yet.”

When they came back at 7:30 there was still a line up. They endured the line, the lack of signage, the lack communication and finally made it to their seats under the misconception that the concert hadn’t yet started since so many were still waiting to come in. “There was nothing going on so we thought, okay cool. Obviously they are waiting to start the show because there are still people outside.”

They were confused when Snoop Dogg came on stage, wondering if he was there to warm up the audience. However, he stayed on stage and then a little over an hour later the lights came on. “The lights instantly went on,” Markham says. “We all thought it was a joke. We were like, is this a joke? What’s going on? And then they were clearing people out. There was no encore. He played for about an hour and it was over. And we thought, what just happened?” It was then that they discovered that they had missed the first half of the show and that it had indeed started at 7 p.m. while many were still waiting in line.

Markham says she checked the Snoop Dogg Facebook event page the next morning and found over 100 comments from people saying how disappointed they were and calling out Cabin Media for the mess and for not responding to comments. 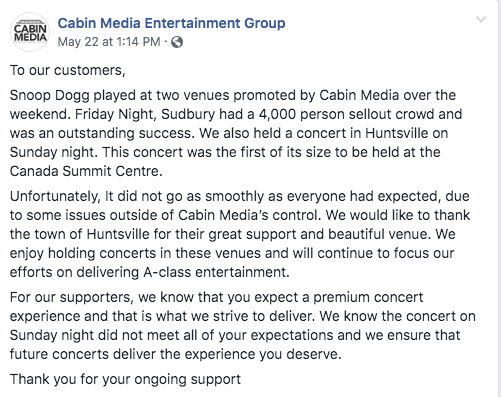 Markham saw it go up. “I saw it within minutes of it going up and I just watched my phone,” she says. “It was ding, ding, ding. Everyone was saying, that’s not much of an apology. What are you going to do about it?” And then, Markham says, about an hour later the entire post was deleted.

I feel really badly for people coming from out of town. It doesn’t look good on our town and yet it doesn’t have anything to do with our town. I wonder if people understand that?  I have seen many performances in the Summit Centre that have been outstanding so it’s definitely possible to run a good show.
Janet Markham, attendee

“Snoop Dogg played at two venues promoted by Cabin Media over the May Long weekend. Friday night, Sudbury had a 4,000 person sellout crowd and was an outstanding success.  We also held a concert in Huntsville on Sunday night.  This concert was the first of its size to be held at the Canada Summit Centre.

“Unfortunately, it did not go as smoothly as everyone had expected, due to some issues outside of Cabin Media’s control.   We would like to thank the town of Huntsville for their great support and beautiful venue. We enjoy holding concerts in these venues and will continue to focus our efforts on delivering A-class entertainment.

“For our supporters, we know that you expect a premium concert experience and that is what we strive to deliver.  We know the concert on Sunday night did not meet all of your expectations and we ensure that future concerts deliver the experience you deserve.   We will learn from this experience and take steps to enhance future show.

“Cabin Media has been operating for over eight years in Ontario and promotes over 50 concerts a year.  Over 75,000 people a year attend amazing concerts and shows put on by Cabin Media.  We work with some world-class artists including Wu-Tang Clan, Akon, Sean Pal, Blue Rodeo and Sum 41.

“There were some ticket holders who had tickets closest to the stage. They were let into the venue last due to the location of their tickets.  There was a delay in entrance for some customers and we can absolutely understand why this would cause frustration.

“We look forward to continuing to bring great artists to concert-goers in Ontario.”