Grant ‘Sandy’ Stanley Robert Ailles was born in Toronto on January 27, 1932. He lived a generous life, full of friends, family and charity. Sandy died on September 16, 2016.

Although Sandy, along with his wife Dianne, left the Muskoka area about 20 years ago he will be forever remembered as the man who conceived of the idea for Camp Dorset, a family holiday camp for renal dialysis patients, and as the man who loved hockey and who always had a pocket full of tickets he was trying to sell to raise money for a worthy cause.

Sandy spent over 20 years serving in the Royal Canadian Air Force as an instrument technician. His ‘retirement’ from the RCA brought him and his family to Huntsville where Sandy started his second career, this time as an electrician and instrumentalist with Kimberly-Clark in Huntsville.

Sandy loved the game of hockey. He played, coached and organized many, many tournaments. Although Sandy started his Oldtimers’ hockey career in Huntsville he moved to the Dorset Hounds Lake of Bays Oldtimers Hockey Club when it was established and hacked at the heels of his buddies until he retired to Penticton BC. The Lake of Bays club created the Sandy Ailles Memorial Award, which is presented to the most dedicated team each year in honour of Sandy and his commitment to the game.

Without a doubt, however, Sandy’s legacy was his vision for, and building of, a dialysis resort on the shores of Deer Lake near Dorset, where guests in renal failure and their families could vacation without worry. He will be forever remembered for his tireless work in establishing Camp Dorset.

Hockey was his getaway, his break, but Camp Dorset was his passion. Longtime friend Steve Woolman

According to the Camp Dorset website, “The idea of a Lions Camp Dorset came about at the 1974 international Lions convention. Lion Sandy Ailles of Dorset and Lion Herb Walpole of Hamilton East had a chance meeting. The Dorset Lions had obtained 380 acres of crown land in the early 70s as part of a plan to build baseball diamonds. However, after hearing of Hamilton East’s dialysis retreats, the idea of building a full-scale camp emerged. Soon after, Hamilton East Lions and the Dorset Lions begin to fundraise for the building of the camp.”

The camp opened in 1978 with three cottages and a school bus that housed two dialysis machines. Over the years it has grown into a resort with 14 cottages, 15 motel units, six trailer sites, a nurse’s cottage, a 10,000 sq.ft. rec hall, and a 3,000 sq.ft. medical centre equipped with 16 dialysis machines. The rec hall is aptly named, The Ailles Family Centre.

Steve Woolman worked along side Sandy in the early days when the camp was being built and continued to work with him right up to the time Sandy decided to move West. Steve speaks very kindly of his old friend. 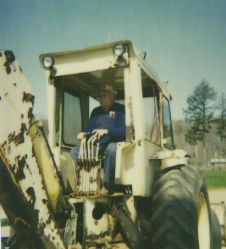 “When Sandy grabbed a hold of something he never let go. I wanted to help. Sandy was the type of guy who brought that out of you. There were lots of nights when Sandy was at the camp by himself at two or three o’clock in the morning on a backhoe or digging with a shovel or doing whatever. We became very good friends and I stayed with him here and we had lots of laughs but we did lots of work.”

Sandy was also the camp’s biggest champion, inside the community and out. “Sandy made sure he was present and that Camp Dorset was present at every Lions convention in Ontario,” said Woolman. “All we did was go down there and he talked to people and he took hundreds of pages of Camp Dorset history and needs and that went on every chair at every convention. No matter what was going on people had Camp Dorset on their mind. That presence is still out there but it will never be the same.”

Family, friends, hockey, Lions, music, charity, devotion, determination and hard work are words that sprinkle the conversation when Sandy’s name is mentioned. And of course there’s Camp Dorset, the legacy Sandy leaves behind.

Camp Dorset never would have been close to what it is without Sandy. He raised thousands and thousands of dollars and whether people gave him the money just to get rid of him, I will never know. Some of them probably did but he just had an idea and he wasn’t giving up. He was a phenomenal man. Steve Woolman

Friends will be received at the Ridley Funeral Home in Toronto on Saturday, October 1st from 10-11 a.m. Funeral Service will be held in the Chapel at 11 a.m. Burial at Mount Pleasant Cemetery. In lieu of flowers, donations to Lions Camp Dorset “Ailles Family Recreation Hall,” are appreciated. PO Box 306, 1087 Camp Dorset Rd., Dorset, ON P0A 1E0.