Owner Jan Nyquist started the company in 1981. “I was five years old,” he jokes. He was actually 26 – still a young man – and the decision came after two-and-a-half years of working during which he realized he didn’t like working for someone else.

Jan had worked in the fittings plant at KWH Pipe (now Uponor) – he liked the work and he worked hard at it, but his first push toward self-employment came when the company sent him to a project in Maine after he’d been with them for just a few weeks. “They shouldn’t have done that,” he laughs. “I thought it was pretty interesting stuff and I met a guy from Toronto who had a smaller company that was working all over Ontario and various parts of the United States and Canada, and I saw lots of opportunity.” Jan worked with him for two years before striking out on his own.

Armed with just $3000 of his own money and another borrowed $5000 he bought an old fusion machine and an old truck and made enough money that first year to buy a larger machine. 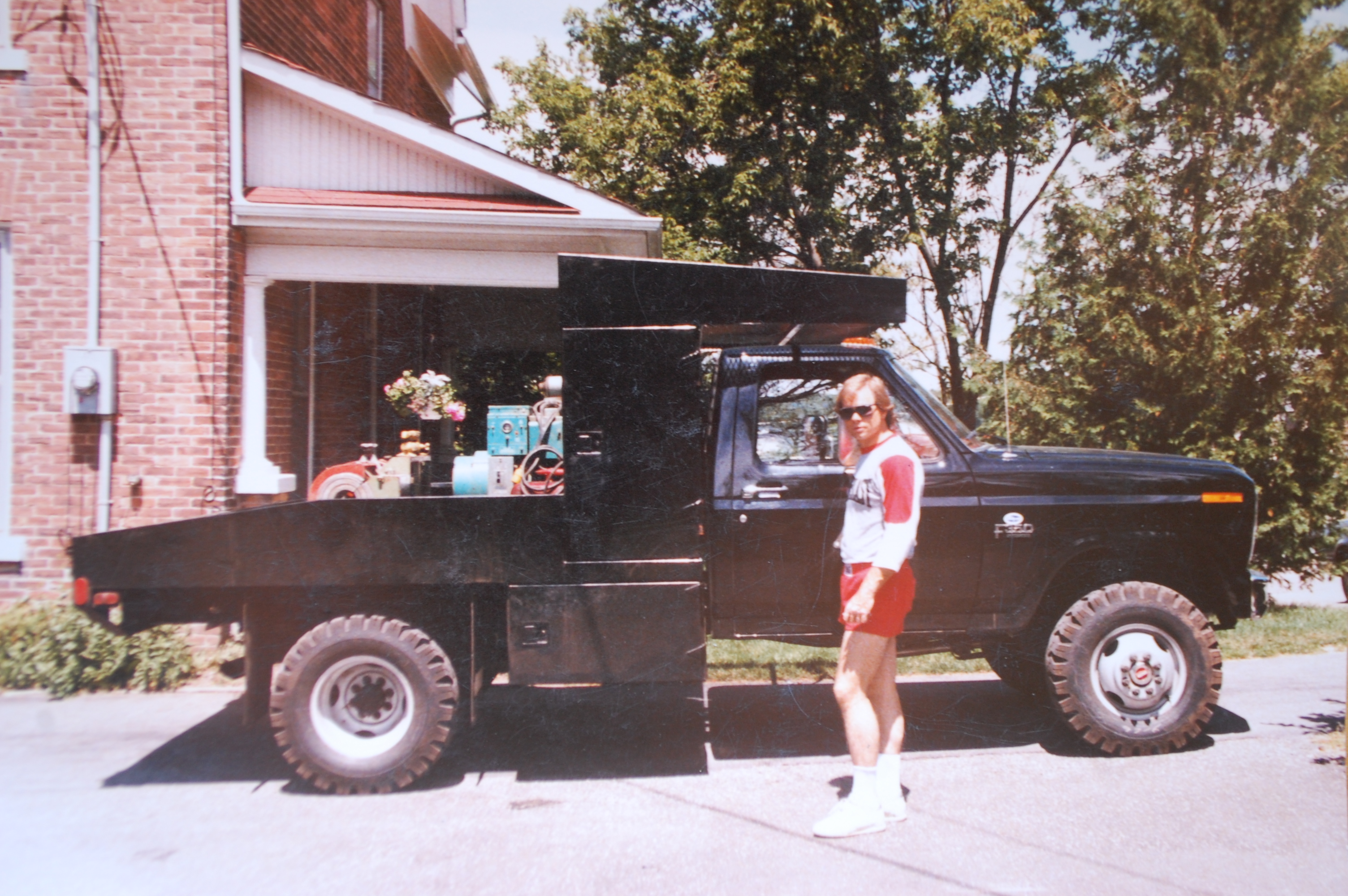 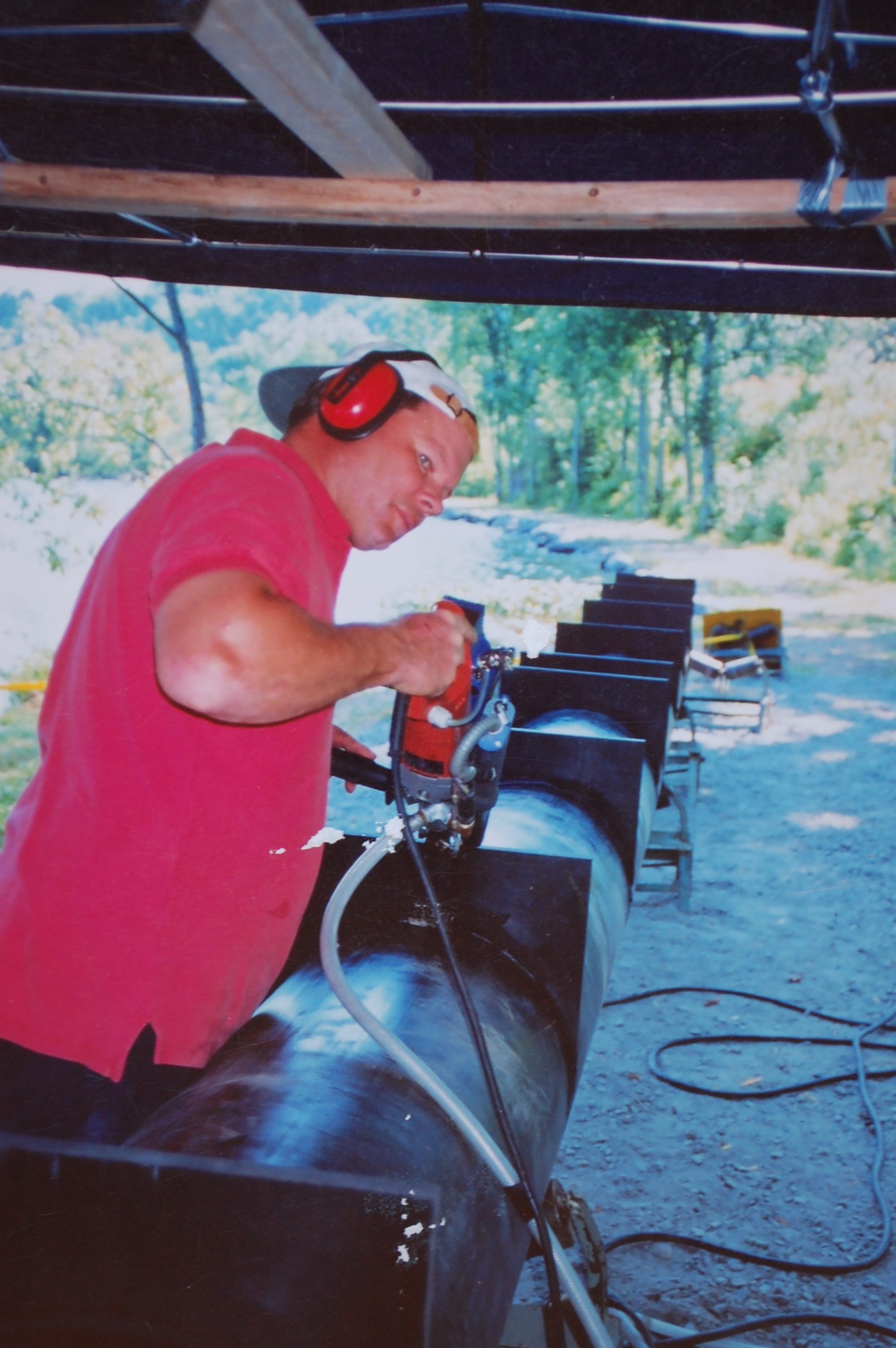 (Above from left) An early photo of Jan Nyquist with a Pipefusion truck; Jan hard at work

His business grew, but for many years it was always small in his eyes, with never more than three employees. Until 2005.

“I said to myself, ‘Jan, you’re 50. It’s fun to work, it’s fun to sweat, it’s fun to be in the middle of nowhere, but do you want to do that until you’re 65? So I made the conscious decision to grow the business.”

And grow it he did. The company now employs 22 people, has two locations – one in Huntsville and a retail location south of Gravenhurst – and three distributors in Temagami, Kingston and Apsley. They have completed projects all over the world including the high Arctic, the U.S., Guam, Bermuda, the Philippines, Vietnam, Mexico, Iraq, Pakistan, Trinidad and Tobago, Venezuela, and the United Arab Emirates. And since 2005 they’ve installed nearly 1,000,000 feet of pipe and built almost 2500 docks, 800 of those so far this year alone. 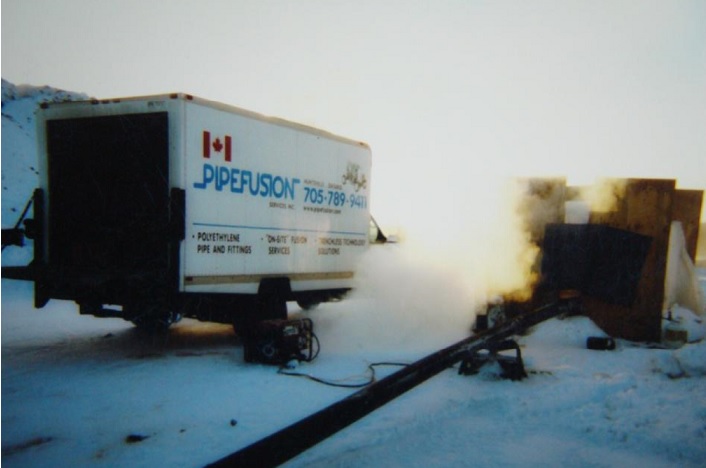 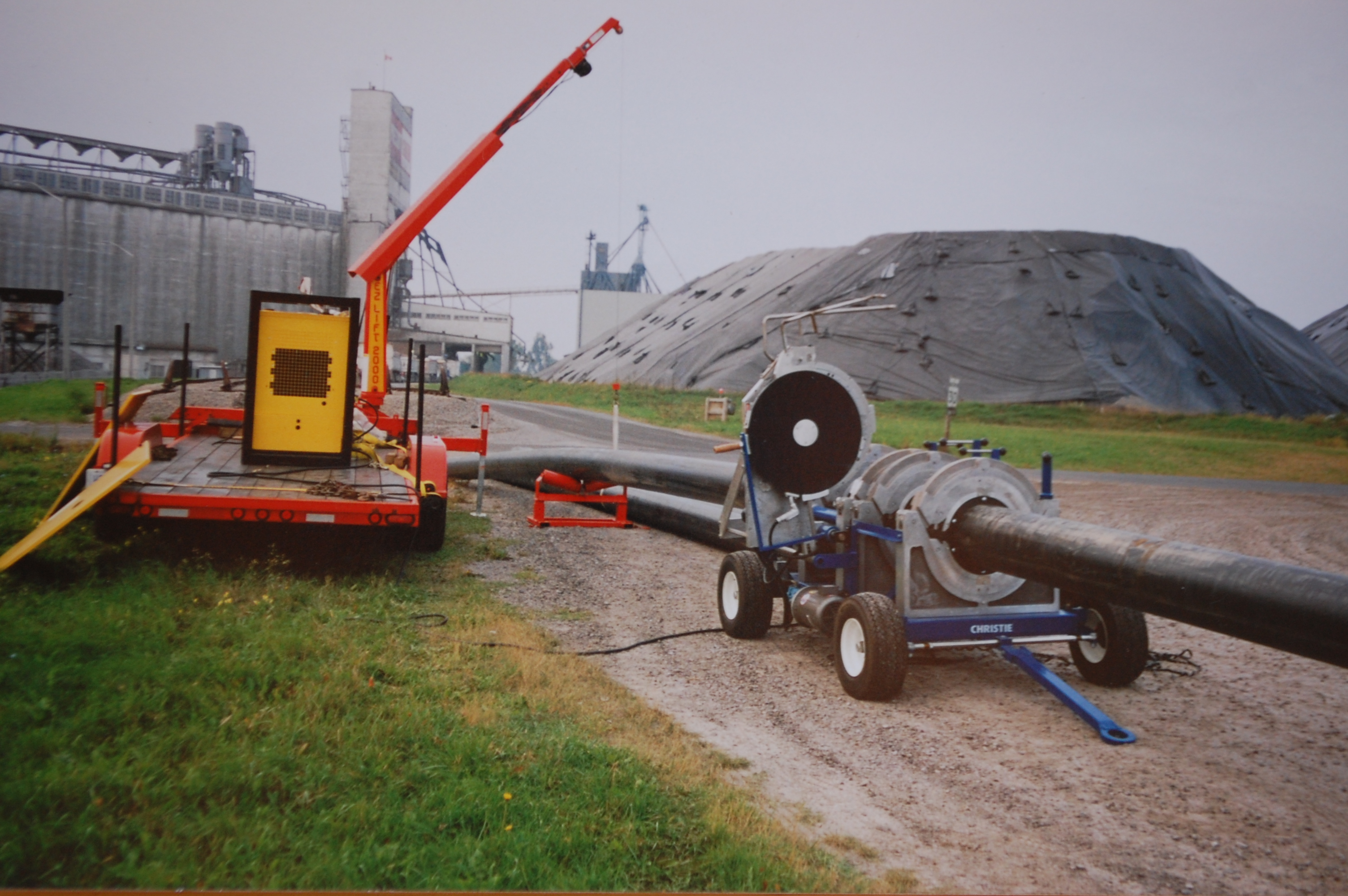 Despite its growth, many people don’t know what Pipefusion does or that they, and the dock-building company NyDock, are one and the same.

At its simplest level Pipefusion deals with high-density polyethylene pipe (HDPE) – fusing it, manufacturing fittings for it, and installing it for wide-ranging applications and industries including mining, oil and gas, municipal water and sewer systems, aquaculture, and landfill sites and, of course, as pontoons for floating docks and boathouses. They also manufacture custom fittings, sell fusion machines, and provide fusion training for other installers.

The pipe comes from local manufacturer Uponor and Jan is happy to support the local economy in using their product. Pipefusion is one of a small number of companies across Canada that take the pipe from companies like Uponor and sell and install systems made from it on projects.

It’s a complex business – there can be hundreds of different parts required – and it’s a highly technical field. We are a wholesaler, a distributor, a supplier, a manufacturer and a retailer all in one. And what’s unique about our business is we have diversified. We’ve taken one product – polyethylene pipe – and we’ve found many uses for it or many ways to create value from it. That’s innovation.
Jan Nyquist, Pipefusion owner

Along the way they’ve encountered some interesting projects – too many to count, says Jan. But there have been some definite highlights and unique applications of their product.

There was the gold mine that required more than 100,000 feet of pipe to carry mine tailings – the waste byproducts of the mine’s extraction process – to the tailings ponds and bring reclaimed water back.

Or the aquaculture project in the Bay of Fundy that needed them to manufacture parts of the skeleton for their unique fish farming system. “The iCage looks like a big barrel – probably 40 feet in diameter and 50 or 60 feet long – wrapped in netting which keeps the fish inside,” says Brian Hale, Pipefusion’s Operations Manager. “The skeleton of this thing was built from polyethylene pipe and they designed it so they could fill the skeleton with water to make it sink below the surface during a storm. We fabricated everything to build that skeleton including hundreds of fittings.”

Many people locally have used the Hunters Bay boardwalk – an early Nydock project. And their most significant dock project to date was for the Municipality of Temagami, where they built and installed 100 docks in nine locations. “We were awarded the project in September and it was shipped and installed by the end of December,” says Jan. 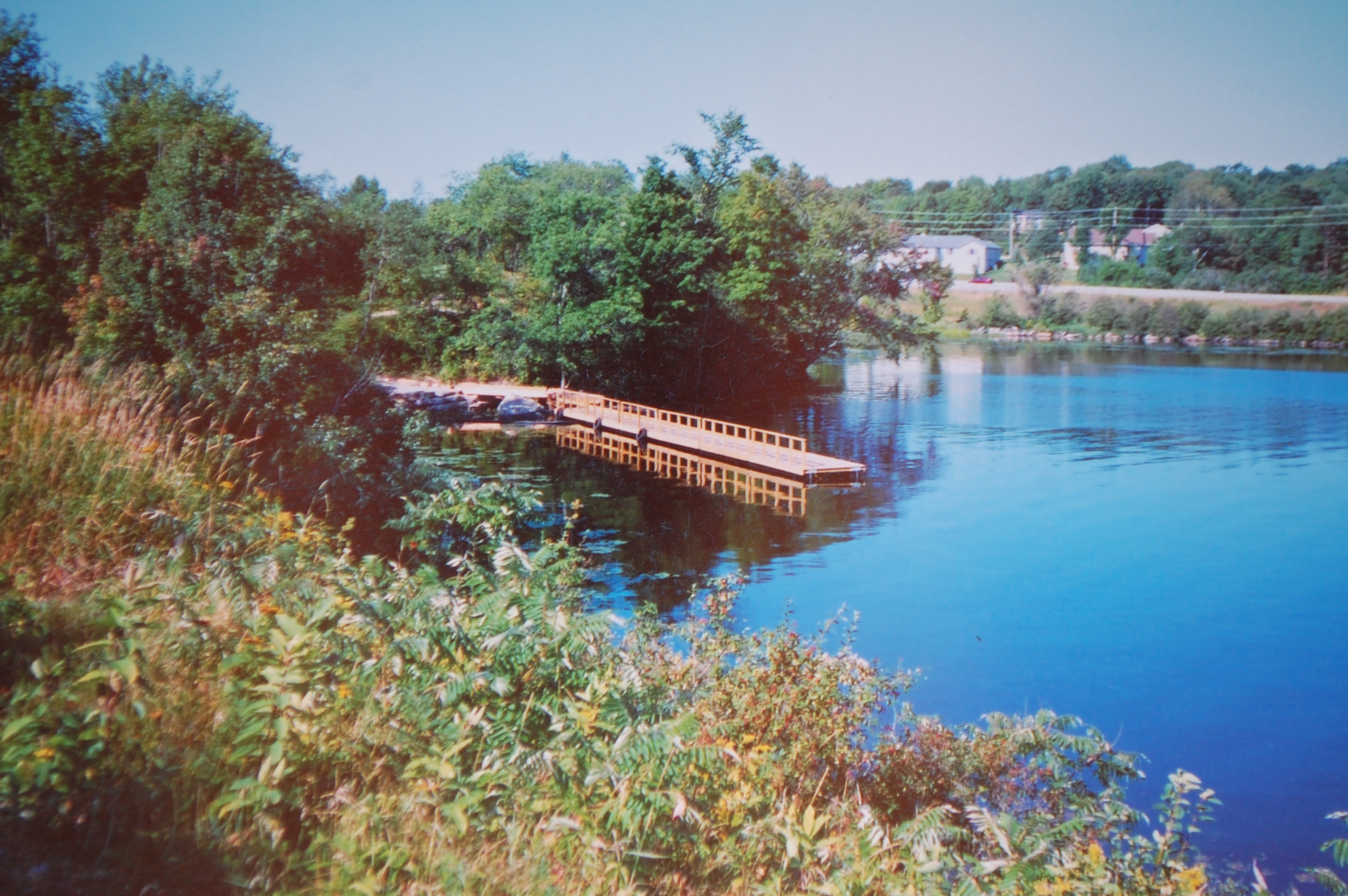 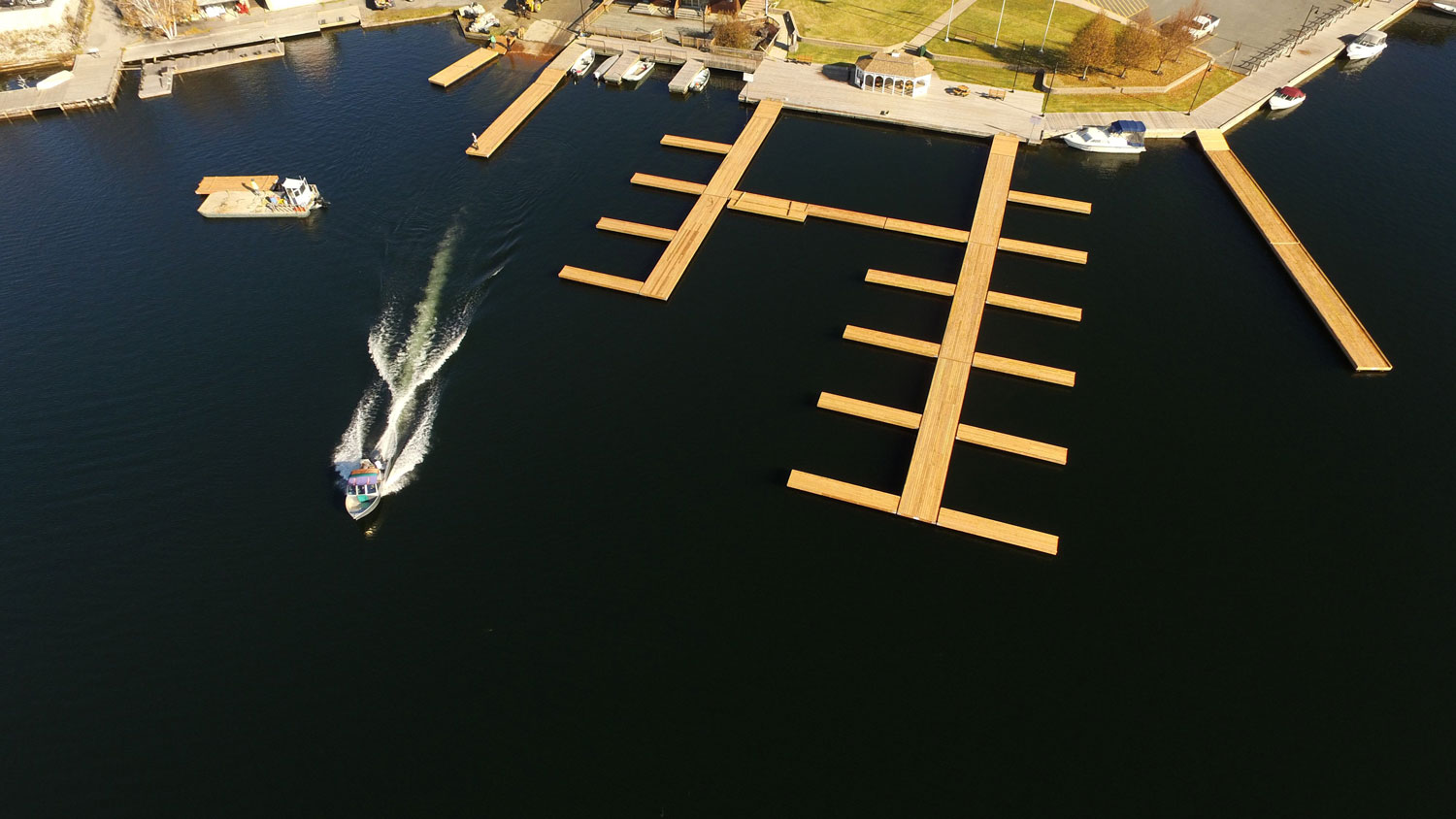 (Above from left) The beginning of the Hunters Bay boardwalk installation; some of the 100 docks installed in nine locations for the Municipality of Temagami

As is typical for the company, they provided consultation free-of-charge in advance of the Request for Proposal to help ensure the specifications for the site were accurate.

“In some commercial projects we provide a significant amount of upfront consulting expertise that we may not get return on,” says Pipefusion’s Vice President Libby Boucher. “But we recognize that it’s important for them to end up with a solution that meets their needs whether it’s our product or not.”

NyDock has constructed a swim-up coffee bar, supplied pontoons for a floating wedding reception, and are in the process of manufacturing 36-inch diameter pontoons to float homes in Toronto. 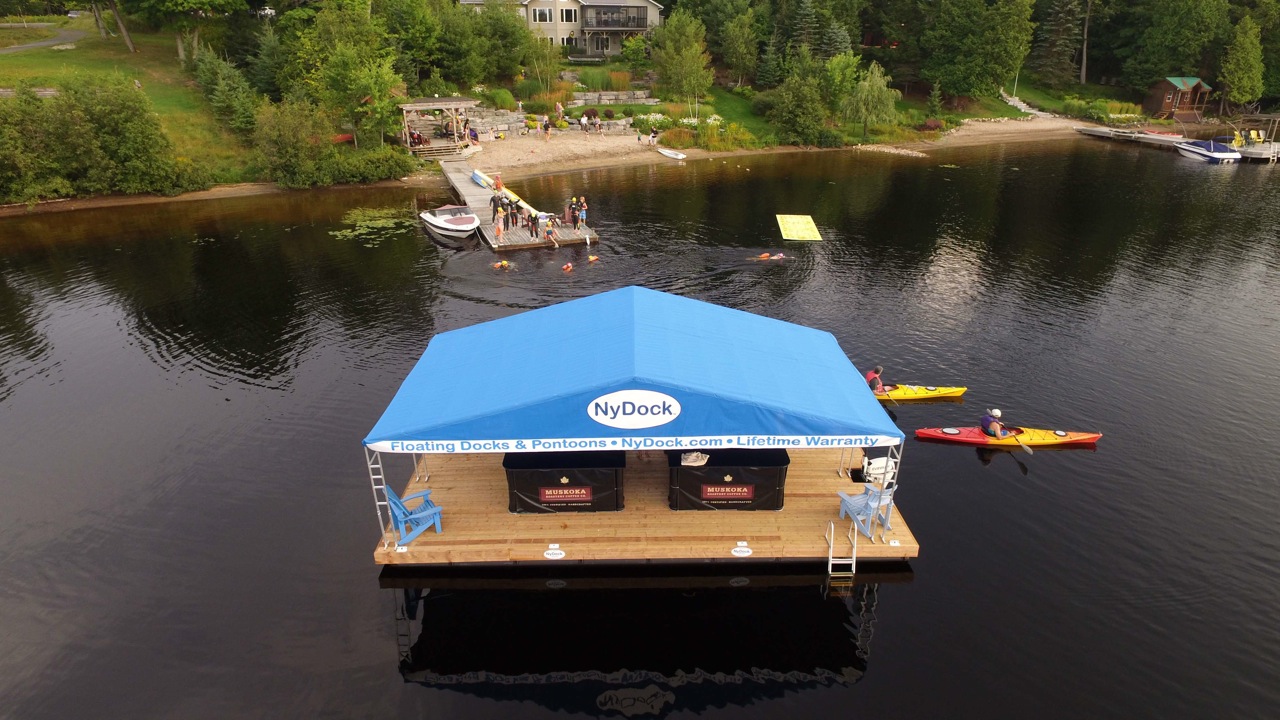 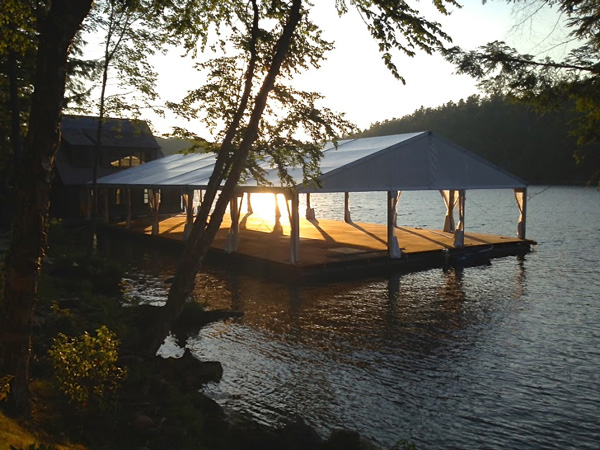 And they recently announced a gift to the Town of Huntsville – a floating art installation for the Muskoka River that honours Tom Thomson. (Read the story on Doppler here: Pipefusion donates public art installation in honour of its 35th anniversary.

It’s the most recent in a long list of community-minded projects and support. Like the Jeff Bestwick Life Fund which they spearheaded in 2014 to raise funds for a wheelchair-accessible NyDock pontoon boat for Jeff Bestwick, who suffered a work-related spinal injury in 2004. Or providing dock stages, floating picnic tables or donations to local initiatives and events like Band on the Run, Nuit Blanche North, the Sunrise Swim for Hospice, and the Santa Claus Parade.

“We contribute to the community because it’s fun and there’s a need,” says Jan. “I don’t think we’ve ever said no. Yes, when you participate in community events you are making your presence known, but that’s not why we do it. This town is a place where I grew up – it’s in my heart, it’s in my soul.”