You are here: Home / Community / John Verbeek has lived a life some people would believe only happens in movies

John Verbeek is an amazing storyteller. And not made up, fictitious stories either. I’m talking sit-on-the-edge-of-your seat in anticipation of the next thing that comes out of his mouth. His accounts are real. Many of them being tragic. But they are proof that war is absolute hell. And the crazy thing is, John actually lived through it.

He lived in a small town in Holland called De Bilt. As a young boy, he played hide and seek and collected matchboxes and stamps. He was just 12 years old when WWII began. John witnessed things that you would believe only happened in the movies. He saw dead bodies on the side of the road, people dying of starvation and he lived about 12 kilometres down the road from a concentration camp. More than once, he and his sister walked more than 300 kilometres with a cart to get food. The trek for food essentials took several days and often resulted in asking a farmer to spend the night in his hayloft.

John was about 15 at the time German troops were storming the streets with machine guns. A government regulation required all men between the ages of 16 and 65 to be shipped to Germany to work in factories doing hard labour without pay. He spent a few years hiding out at his aunt’s farm and bypassed being forced to work.

“It was a scary time,” he says. “Once, when I was 15, they stopped me on the street, and I was surrounded by German officers with guns that were poking me in the back. They were asking me all sorts of questions, which I couldn’t understand anyway. My knees knocking against each other from fright.”

By the time he was 23, he was ready to leave his country. He had already met his future wife and they were engaged. The war created a lasting impression in his mind, and not a very good one. He wanted to build a new life. He knew nothing about Canada except that it was considered the land of opportunity and that the Canadian army were true heroes.

“They were troops who treated us like people instead of cattle,” John says, adding that the Canadian army liberated Holland from the Nazis and to this day he maintains high regard.

With a suitcase in one hand and a toolbox in the other, he spent nine days travelling across the Atlantic Ocean. John couldn’t speak a word of English that fateful day he arrived on Canadian soil. He started with comic books. Simple words and a stories were easy enough to catch onto, although the slang might not have been too beneficial. He read children’s books and the dictionary was his go-to for words he didn’t understand. He put a red dot beside a particular word as a reference point for ones that he had already looked up and then chastised himself when he looked it up a second or third time.

Sometimes you hear people say, I’ve been away so long I can’t speak my language. I think they make that up. My wife and I made it mandatory to speak English at home. We knew it was very important to speak the language of the country we lived in. We’d be nothing. Learning a language comes in plateaus. At first you start to learn simple words and then you start learning things about your work. You start to insert other words. For a while it seemed you didn’t learn anything. It all went in spurts and spats.

One thing that John did bring to Canada with him was a background in construction. He had attended night school in Holland for eight years, taking courses in subjects like mathematics and architectural drafting. When he lived in Bowmanville, he worked his way up going from a labourer to a project manager. He built numerous high schools, large-scale buildings and even the courthouse in Whitby. 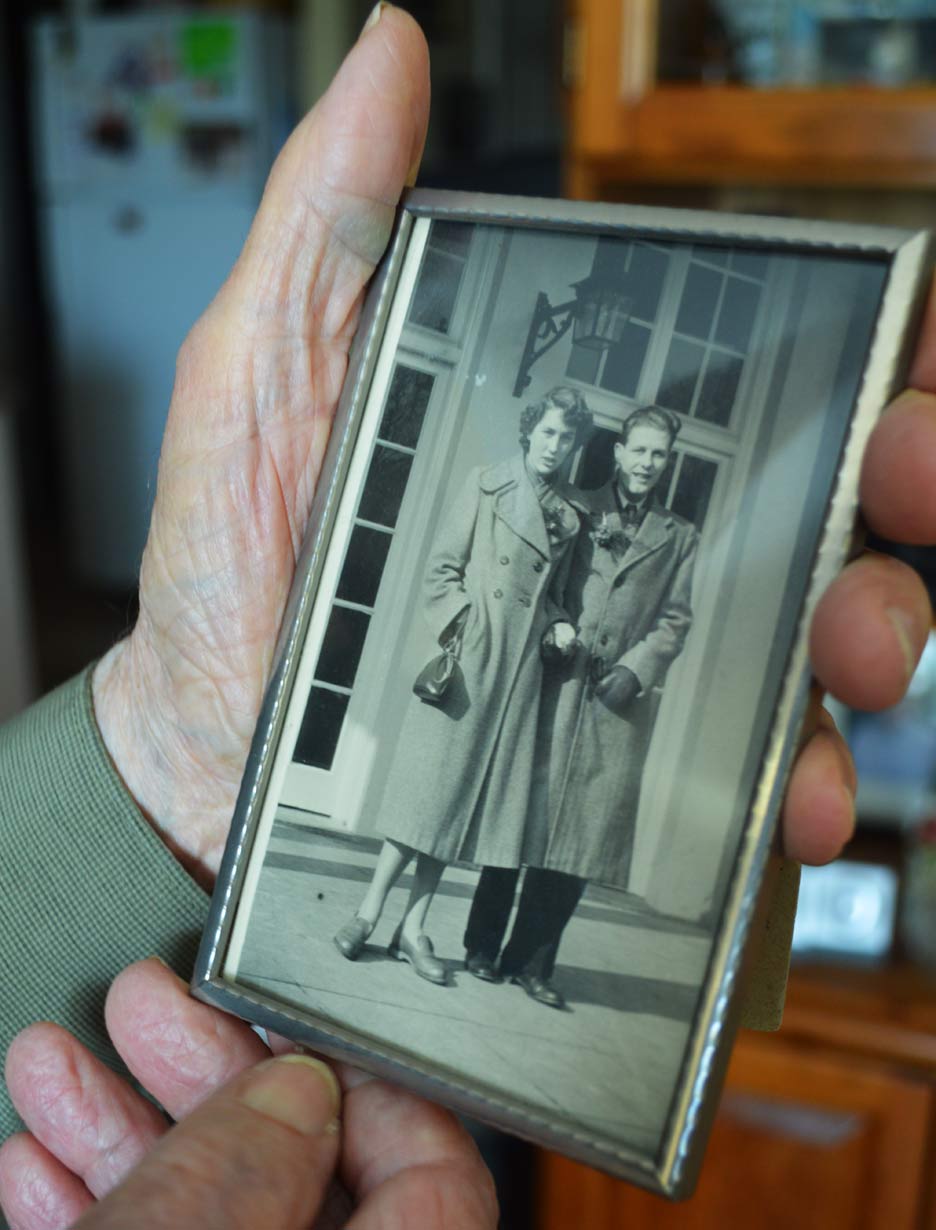 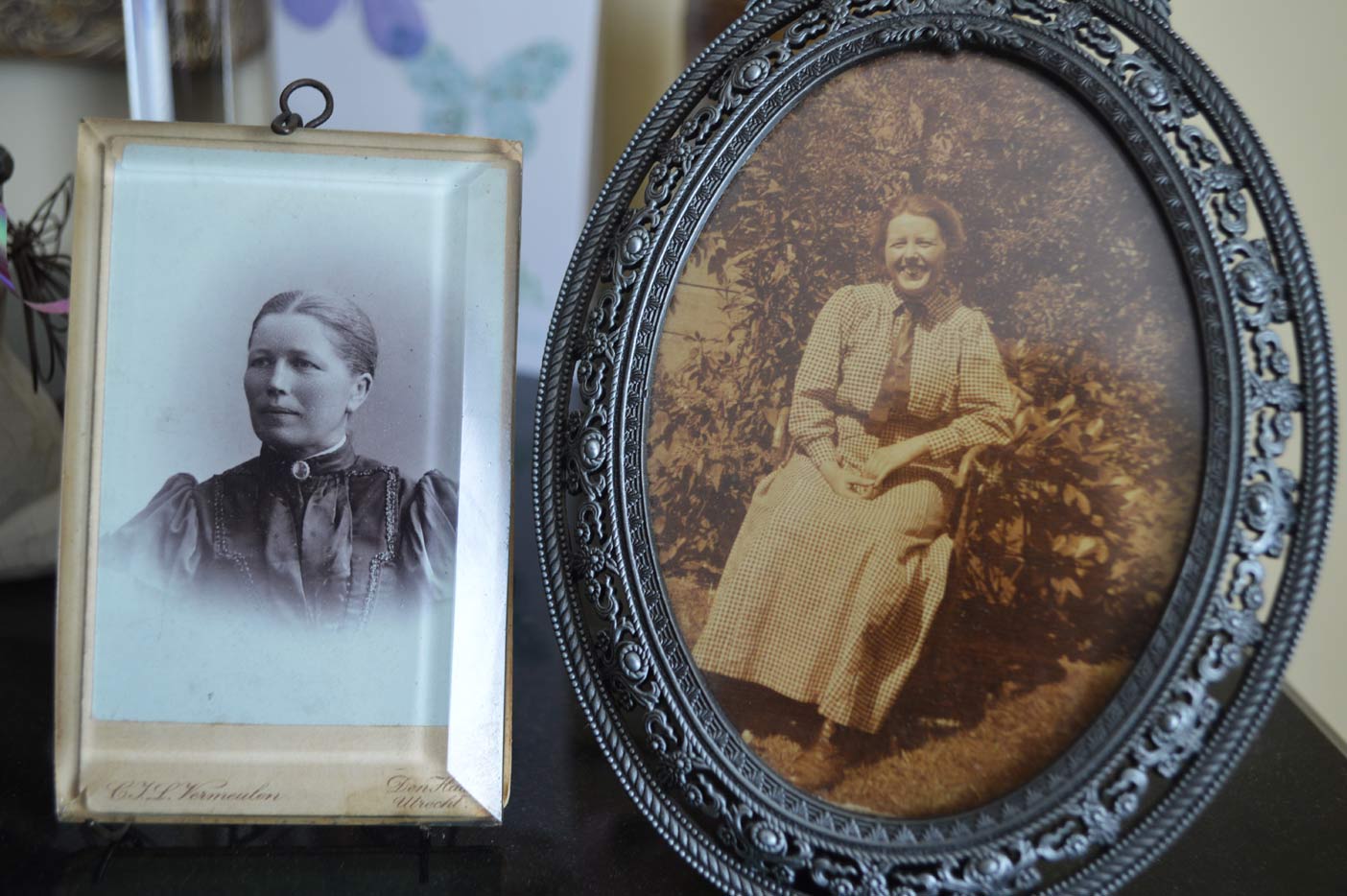 (Above left) John was six years older than his wife but she had his heart right from the start. He was 22 in the picture and she was 15. (Above right) Pictures of John’s grandmother, left, and his mother are evidence of a time gone by. He didn’t see his family for 25 years after settling in Canada from Holland.

In the mid-1960s, he started to feel a real pull to teach. He believed he had something to offer young people. With his knowledge in construction and a brain rife with war history, John took some courses and got his degree in teaching. And in 1967 his dream came true and he started teaching at Huntsville High School. He taught construction technology, architectural drafting, machine drafting and some world war history.

As a teacher, John says he was firm but fair. He never forgot that he had been a student, too. He didn’t tolerate bullying or filthy language (I wanted to say it’s a good thing I didn’t have any classes with him because I have a serious potty mouth. But some things are best left unsaid.) As much as he was all about enriching the students’ lives, he wasn’t keen on being their friend. If you do, he says, it’s easy to lose respect.

Maybe I helped shape the town… so many students came through my classroom and got a job here and stayed here. Otherwise, they might have to move out of town.

More than 10 years ago, John discovered a new passion and it was his son who got him into it. In his beautiful Huntsville condo, he has spent countless hours replicating some of the world’s most impressive buildings. What makes John’s hobby so unique is that he’s recreating these historic landmarks, like the Eiffel Tower and the CN Tower, out of matchsticks. He’s even built a World War I replica of a fighter plane. Yes, thousands of matchsticks have been carefully measured and cut and and joined together perfectly. He does his own drawings to scale. He’s got an unbeatable attention for detail, tied in with a whole lot of patience and a knack for precision. Those attributes are probably why he was called upon some 15 years ago when the Town clock needed some repairing. 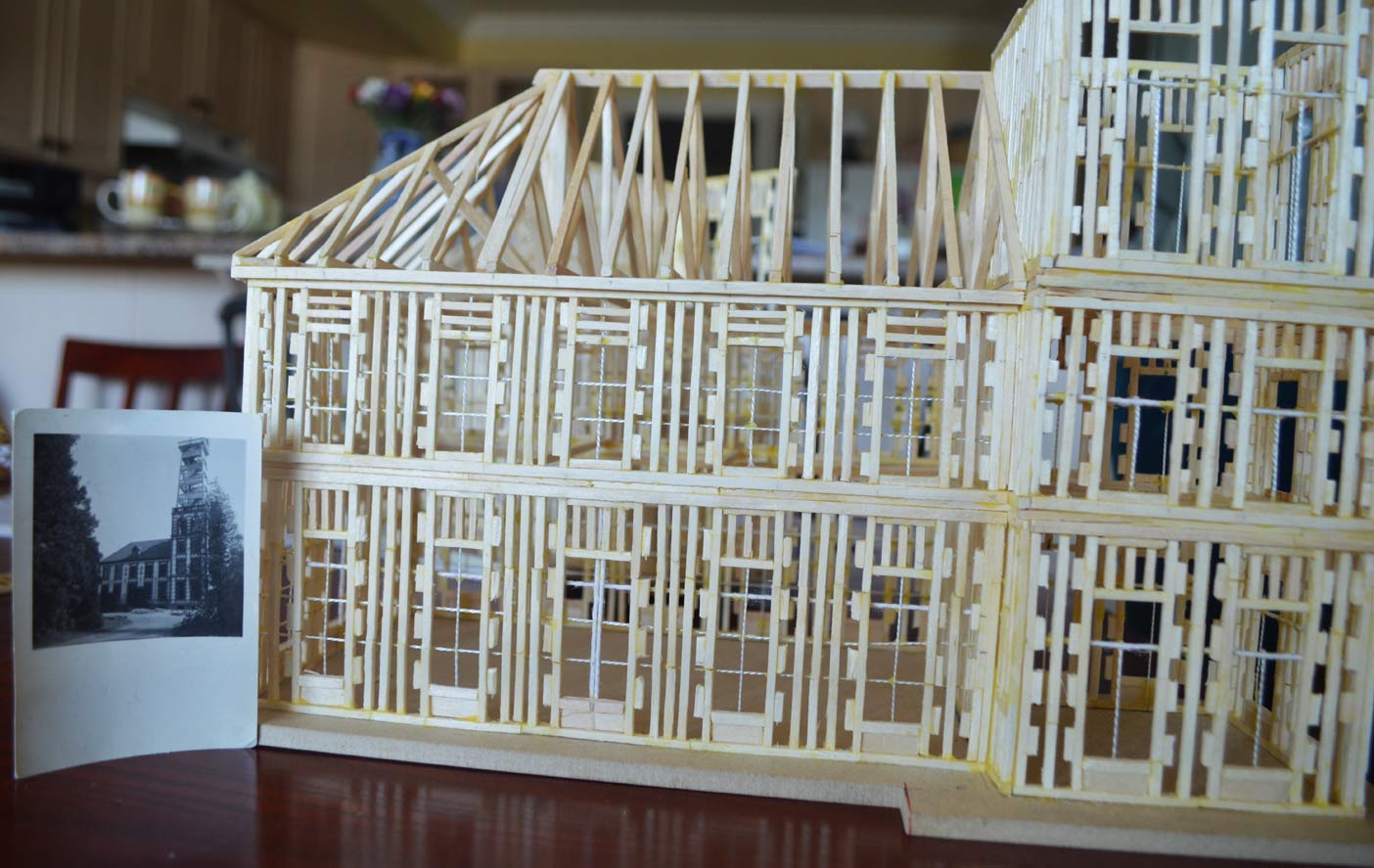 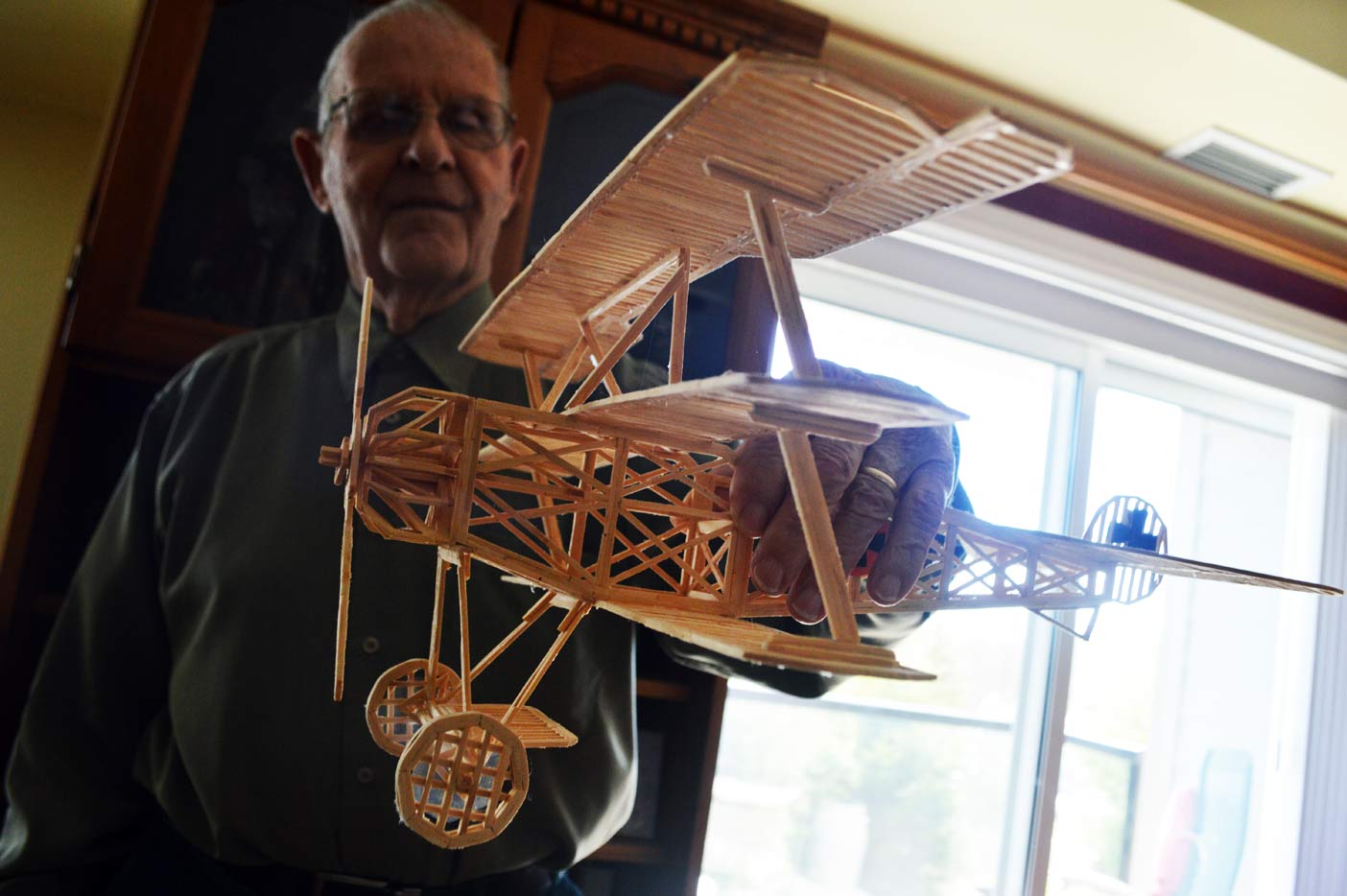 (Clockwise from above left) John has built some of the world’s most famous buildings out of matchsticks. The CN Tower took him four months to complete and is more than three feet tall.  | This WWI fighter plane is a real work of art and a lot of love went into creating it.  |  His mini replica of his Dairy Lane Condo building. He does his own drawings and then scales them to fit. Precision and patience are a virtue when it comes to this one-of-a-kind hobby.

He has no regrets in life. He considers himself a lucky Canadian. The things that John saw as a young man taught him some valuable life lessons. He knows the importance of forgiveness, and to treat others how you want to be treated. If you have a disagreement with someone, make peace. His memories of the war have not faded. He continues to tell the stories because he knows how lucky he was to survive.

“I never forget, but I forgive,” he says. “And when you forgive you, are a much happier person.”