You are here: Home / Feature / Oh the places you’ll go, and the people you will meet: James Solecki

When James and Kate Solecki arrived in Port Sydney in 1998, they would not have believed that they would have a successful business in Muskoka and another in the Turks and Caicos Islands inside of 20 years. They could never have guessed how a couple of contacts would provide opportunities that would contribute to that success. Nor would they have guessed that the island business would supply them with one of the most challenging experiences of their lives.

James laughs, “We were so poor when we arrived here. I used my last $72 to register our business, INTEGRA Bespoke Lighting Systems, which I worked at part time while driving a truck for a gas company.” He remembers, “We realized $10,000 gross revenue from the business that first year.” Kate adds, “We netted …maybe… $2,000.”

“There was literally nobody doing lighting in Muskoka when we got here,” says James. “The second year in business, I got a call from a man named Todd on Lake Muskoka.   He told me that he had a very real condition called scotophobia – fear of the dark.” He continues, “I did my first big lighting plan for him, which came in at $24,000. When he looked at the plan he asked about areas that are usually left unlit so I re-did it and the new plan came in at $32,000. When he asked me how long it would take I estimated two or three months. He informed me that he was getting married in two and a half weeks and it had to be done within that time frame.”

James recalls his frustration: “I told him it was impossible because I had a full time job.” James pauses, “And then he asked me a compelling question: ‘Are you a truck driver or are you a lighting guy? Make a decision.’ Then he wrote me a cheque for $60,000 and told me to quit my job.” Kate and James both laugh now but at the time it was terrifying. James had a full time, decently paid job with benefits, they’d just bought a house and they were expecting their first child. They put their trepidation aside and decided to go for it.

The job was completed and James and Kate attended the wedding. There they met a well-connected businessman from southwestern Ontario who contracted James for another job; from there the network referral went into overdrive and, as the saying goes, they’ve never looked back.

Early on, INTEGRA made the conscious decision to work toward protecting the natural darkness of our night sky. It was around the same time that the Torrance Barrens Dark-Sky Preserve opened and light pollution became a better-known issue. James feared that the movement might damage or even wipe out his business until he realized what an opportunity he had to do a lighting business differently and in a way that benefited the environment.

He explains, “Apart from obliterating our view of the stars, light pollution hampers our ability to see properly and it allows glare and light trespass. There have been a number of studies that have shown that light pollution is causing a significant detrimental effect on both wildlife and human health.” He began specializing in providing INTEGRA’s clients with dark sky friendly lighting systems. He says, “It’s more than just dark sky friendly; it’s really environmentally sensitive lighting, which has a broader scope.”

James later developed the Outdoor Lighting Stewardship Program. He has made 25 presentations to lake associations, municipalities, service clubs, interest groups and ratepayer associations. INTEGRA was the recipient of the Muskoka Stewardship Award presented by the Muskoka Heritage Foundation for their efforts in promoting and maintaining the natural dark-sky environment. The motto for James’ philosophy of lighting is, “see the effect, not the source.”

When WalMart came to Huntsville, James was aghast at how lit up the property would be. He did a light assessment and went to the developer and to council to show them how over-lit the project was. No one was interested. He then took it to the media. “We got 13 weeks of media coverage, which resulted in the store retrofitting its entire lighting package.”

Life and business took another turn in 2015 when a Muskoka client invited James to the Turks and Caicos Islands (TCI) to advise on a condo development where he sat on the board. The client invited Kate to accompany James and make it a bit of a vacation. After the lighting assessment was done, the couple drove around the island of Providenciales. They saw opportunity everywhere and asked their host to provide them with access to some developers and property owners.

“I saw such a huge gap between the unsophisticated marketplace in TCI and the very sophisticated clientele,” James says. “Once I got to talk with people, they were sold when I assured them that I could deliver a far superior product within their existing budgets.” His island benefactor wasn’t encouraging at first thinking it was ‘too small’ a market but as James told him: “This is where I do best, at the small, boutique lighting level.” 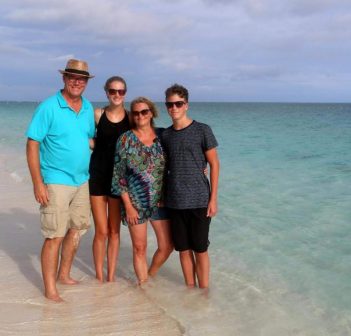 Kate interjects, “James is busiest in summer so we’ve always been beach lovers and vacationed in the Caribbean.” She adds, “We often talked about how we might do something on one of the islands in the future.” She smiles, “This just accelerated our time frame. When people ask me how we chose the Turks and Caicos, I always say, ‘We didn’t choose TCI, it chose us’.”

On August 27, James scheduled three weeks on the island, leaving Kate and staff to man the fort in Muskoka. He was excited to be heading to the brand new, beautiful bungalow they’d just moved into at the beginning of the month. Kate, James and their teenagers, Emma and Jack left clothes and personal items at the island home and planned to visit soon. Life was good.

After just a couple of days, talk of a hurricane named Irma began to surface and by Friday, September 1, James phoned Kate and said, “We need to have a plan…in case.” He reminisces, “Before we came to TCI, we’d researched the island to be sure that it was a stable place. One thing we liked was that the building codes were quite stringent and designed to handle Category 5 storms.” On the island, James describes the mood as “very British…very stiff upper lip.” They knew it was coming but there was no panic.

On Sunday, September 3, James went looking for a last-minute plane ticket and bought one at a hugely inflated price with a departure date for the coming Thursday. He set a stay/go decision time of 8 a.m. Wednesday. He was a bit concerned about being bumped from the flight, so ‘just in case’ he prepared the new house, which is very close to sea level, to ride out the storm.

On Wednesday, all storm models showed nothing but a bad outcome so he decided to leave. Before he did, he ran around with a TCI friend and helped him prepare his buildings for the storm. Coming out of his house he stopped to chat about the coming storm with a Haitian gardener, someone he describes as a sweet, gentle soul. “Sadly, local people didn’t even seem to know there was a storm coming and I really had to persuade the guy to stop working and let me take him to a shelter. Like everywhere in the Caribbean, the poor don’t have Internet access or the benefit of social media and they certainly don’t have the option of leaving.” He gave the man money for food and water, took him to a shelter and went to the airport.

James says, “One of the most painful realizations in a situation like that is knowing that you can leave a place that’s becoming dangerous while others cannot. My ‘privilege’ really ground on me but it made no sense to stay. I wanted to be home with my family and I pledged that I would do something to help when I got home.”