You are here: Home / Feature / Getting home ahead of Irma: James Solecki’s 47-hour escape from a hurricane’s path

Part II – James Solecki describes the ordeal he faced trying to get out of Miami ahead of Hurricane Irma’s arrival. (Read Part I here: Oh the places you’ll go, and the people you will meet: James Solecki)

Things were calm at the island airport in Turks and Caicos. James got on the plane and flew to his scheduled 20-hour layover in Miami. He recalls hours-long lines for airline customer service in Miami so he made the decision to go through security early and stay at the airport.

“When I got to the secure area, it was a mob! People were crying and loud. Tension was high and there was nowhere to even sit down. Nonetheless, I kind of congratulated myself on listening to my gut about getting into the departure area early,” he recounts. “I dragged dinner out for three hours so I’d have somewhere to sit. Then I found a discarded pillow in a renovation area, a blanket outside a closed airline lounge, and tried to sleep for a couple of hours.”

At 4 a.m. things were still somewhat okay. James went into a frequent flyer lounge, sat down with a coffee and went on the Internet. “Pictures of the devastation in TCI [Turks and Caicos Islands] and throughout the Caribbean were just beginning to emerge and I had a breakdown,” he said. “I just wept and wept for the people whose homes were destroyed and the suffering they were undergoing. No one made eye contact or said a single word of comfort. I’ve never felt so isolated.”

Scheduled to get on his flight to Toronto at 1 p.m., James was grabbing a quick snack when he heard an announcement that his flight was departing from a different terminal quite a distance from his location. “I started to run when I heard the server yelling, ‘Sir! You didn’t pay!’ I literally threw $50 toward her and kept sprinting!”

By this time all airport televisions were broadcasting the news that the monster about to hit Miami was a Category 5 hurricane and urging people to seek shelter as soon as possible or to leave the city.

Two hundred people were waiting at the gate for the plane heading to Toronto when a two-hour delay was announced. “I still felt kind of okay. We heard that they were waiting for staff to arrive so I kept my eye on the gate. Ten minutes after the announcement, the agent looked at her computer, closed it and just walked away. The board above the gate went from reading delayed to reading cancelled. There was no explanation. I had a moment of panic and thought…now what?”

Laughing – though he was far from laughing then – James says, “I started running back toward customer service and when people saw me running they seemed to think that maybe they should start running too! I made it to the customer service line and tried to check flight status but the WiFi was overloaded and I couldn’t get online.”

His wife Kate recalls James phoning her and asking her to search for alternate flights or flight information. “I was standing in our kitchen in Port Sydney on the landline, my tablet and my cell phone on.” She shakes her head, “As well as being worried for James and all those poor people in the Caribbean, I had an eye infection so I was half blind and there was an urgent work issue to deal with so I just got in the ‘zone’ and worked my three devices for about three hours.”

Behind James a female passenger called out that she’d gotten a flight to Toronto. Then another guy said that he got a flight to Newark. James smiles, “New Jersey looked very good to me; actually anywhere that wasn’t Miami looked good but that guy got the last seat. There were thousands of people all trying to get flights. It was cyber mayhem.”

James says that social media played a huge role in keeping him from despairing and in trying to help him. Reading his Facebook posts, James went from jubilation to despair over and over. Friend Anne Larcade was working her hotel contacts in Miami while Catherine Cole called friends in West Palm Beach to try to find a place where he could shelter from the storm if it came to that.

He continues, “I finally got through to an airline but my phone was going in and out. I heard the agent say Dallas but the flight number was a blank and the time was blank! All the time I’m thinking about whether I should bail from the line I was in to take a chance on Dallas. I decided to bail and I told the agent to book it. As I dashed to that departure gate I yelled out ‘Dallas’ to help others still in line.”

He recalls, “I was so nervous when I arrived and couldn’t print my boarding pass. Luckily, the staff was calm and assured me that I was on the flight, computer glitches notwithstanding.” As departure time approached, the airline didn’t have enough staff to meet airline regulations. Employees were obeying evacuation orders and were taking  their families to safety.

By this time James was sure this flight would be cancelled, too. Sitting anxiously he watched as three “angels” approached. “Jaws actually dropped as three of the most beautiful women I’ve ever seen arrived to take up their cabin duties!” James said.

The pilot and co-pilot deplaned

These celestial beings got everyone seated and announced it was a full flight. James recalls, “I was just about to breathe a sigh of relief as the push-back machines moved us back, then forward. Then it stopped and we watched as the pilot and co-pilot deplaned! An announcement was made that a gate attendant would come on board and explain.”

The explanation was that the flight crew was needed more urgently elsewhere. There was some panic as people started yelling and weeping in fear and frustration.

Off the plane and believing he had exhausted all options of getting out of Miami, James tried his phone one last time and reached an airline agent who told him that the Dallas flight was not cancelled, only delayed. She also told him there was one seat at another terminal bound for Chicago.

James shakes his head, “I can’t believe that I did this, but I asked if she could hold the seat for just one minute while I checked the Dallas flight again. In an exasperated voice she replied, ‘SIR! DECIDE NOW.’ Just then I heard a cheer go up; Dallas had found a crew and I gambled and stuck with that flight.” 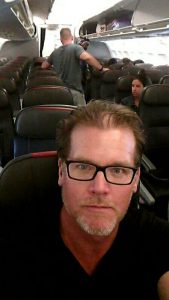 They boarded but heard that passengers had been bumped to make room for American Airlines crew heading where they were needed. “I half-joked to a seat mate that if they tried to make me get off to get his video camera on because it could result in a fight.”

A man across the aisle seemed to be connected to air traffic control and staffing information. He was an off-duty pilot and he informed James that they still didn’t have a ground crew and they could legally sit right where they were for 3.5 hours. He added that it didn’t really matter since at 10 p.m. the flight crew would ‘time out’ according to FAA regulations. It was an emotional roller-coaster for everyone on board.

Finally ground crew showed but an announcement was made that they couldn’t leave yet because air space was full. As it happened, that wasn’t true: instead there had been a ‘security incident’ – later known to be a shooting – in the airport.

We were 35th in a line up to depart and the airport was locked down. I almost gave up at that point. The A/C was off and it was so hot in there. Babies were screaming, dogs were barking and people were sick from the fumes of 35 idling planes.

Then, an hour past the flight crews timing out, the plane departed at 11 p.m. James postulates, “I don’t know of course, but I think they just said, ‘we are doing this – regulations be damned!'”

He has nothing but praise for American Airlines. “They were amazing! A dozen of them stayed on to process us when we landed in Dallas Fort Worth on our way to Charlotte/Toronto. They turned Terminal D into a hostel.”

But by this time, James was scheduled to be the last person to board for Toronto. An AA staffer asked him his ‘story’ at which time James said, “I broke down again.” The agent was so filled with compassion that he took all of his documents and said he’d ensure that he got on the flight since he’d been the longest in transit.

Home again after 47 hours in transit James posted on Facebook, “Home now and surrounded by love. Starting to get images and reports in from TCI and it’s not good folks. Extensive massive damage and destruction across the island. I am so lucky and blessed to have got away relatively unscathed. Now to focus my efforts at helping friends and strangers recover. I have a plan on how I can best help and will begin immediately.”

And he kept the pledge he made to himself when he’d left the island in what seemed a lifetime ago. James is encouraging people to help the Turks and Caicos Islands recover and restore after the ravages of Hurricane Irma. “I have started a fundraising campaign for disaster relief efforts in the TCI. My goal is to raise $500,000 in round one, with an additional $500,000 in the future. The money will all be sent to the Disaster Relief Fund administered by the Salvation Army in the TCI – a well run and trusted organization. Please help me to help the wonderful people of Turks and Caicos.” 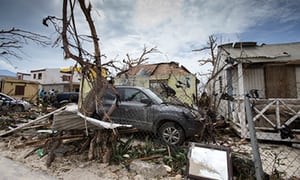 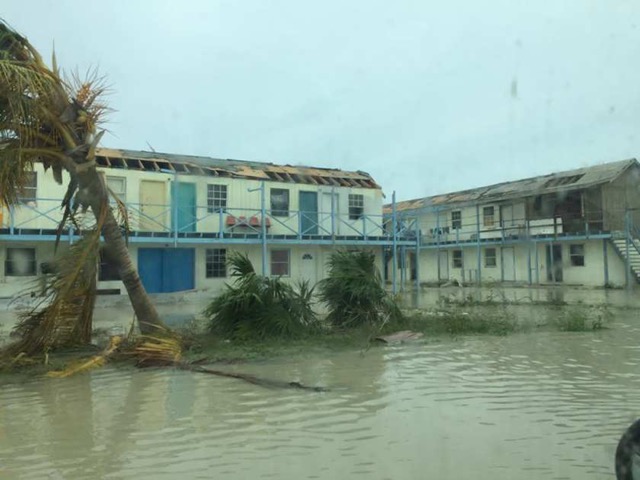 He appreciates what friends and family have contributed already but hopes that some of his clients will heed his request and help out in a big way. And the minute he is clear to do so he is going back.

James is already planning his return trip to his second home where there is so much to do. “Bringing my passion and skills to the island has become more about helping the people there than about a good business opportunity.” He adds, “And of course there still are the beautiful beaches, pristine waters and phenomenal climate that just draws you back. Lights on!”