Main photo: With Mayor Karin Terziano newly declared as the head of Huntsville Council, there will soon be a female face on the mayor’s wall in council chambers (Dawn Huddlestone)

For the first time in its history, Huntsville’s council has a female mayor.

Mayor Karin Terziano took the Oath of Office and received the Chain of Office at a special council meeting on the morning of Tuesday, Dec. 17. She will serve in that role for the time remaining in the 2018-2022 term of council.

The position of mayor was left vacant when former mayor, Scott Aitchison, successfully ran for the federal seat for Parry Sound-Muskoka. At its Nov. 25 meeting, council decided that a new mayor would be appointed and current members of council were invited to apply. Terziano, who had been the acting mayor in her role as deputy mayor, was the only person to do so.

In her remarks following taking the Oath of Office, Terziano thanked council and the former mayor and said that “it’s an honour and a privilege to assume the head of council…I’m grateful for this opportunity to serve the community and will make one promise and that is to do my best for the residents and the future of Huntsville.” 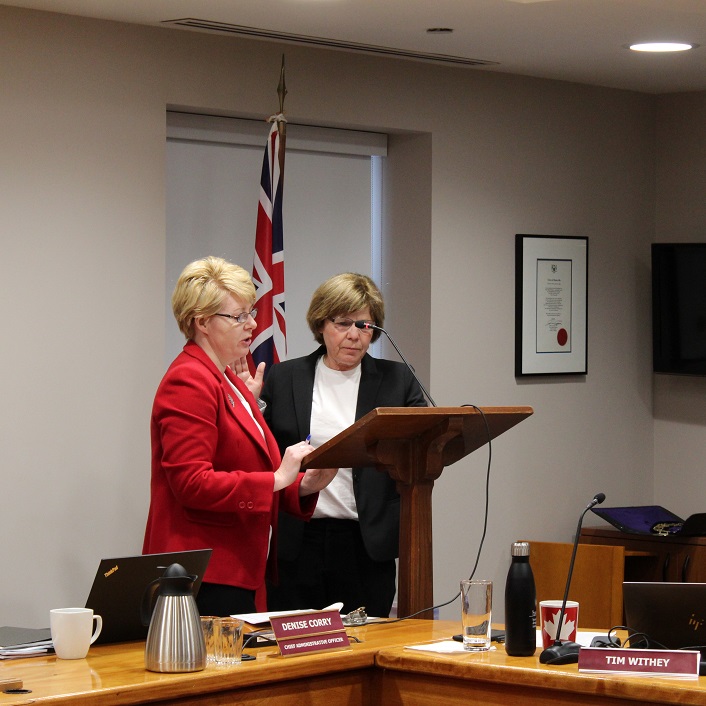 Listen to Mayor Terziano’s first remarks in her new role below:

Terziano said she wasn’t even thinking about the history-making nature of her new position. “I probably couldn’t be any more excited about it if I were a male. It had to happen someday,” she told Huntsville Doppler following the meeting.

“I don’t really have an agenda of change,” she added. “More just getting on track, getting that other seat filled, and getting on with our day-to-day.”

She plans to check in with councillors to ask if they like the current committee structure―at the beginning of this term, the previous Committee of the Whole structure was divided into smaller committees by Aitchison―and “also to see if everybody’s happy with the chairs that they have,” she said.

Council will now have to determine how to fill the Huntsville Ward Councillor position left empty with Terziano’s move to the mayor’s seat. That position will be declared vacant at the regular council meeting this evening.