It’s going to be inconvenient, but they’ll do everything possible to minimize the disruption.

That was the message about 50 people—around half of them business owners or their representatives—heard from the District of Muskoka at a community information session on March 28 regarding the construction on King William Street planned for this year.

The impetus for the project is aging water and sewer infrastructure beneath the road, which needs to be upgraded, but the work will also include reconstruction of the road, curbs and sidewalks.

The road base will be rebuilt and the surface repaved with asphalt, with the existing configuration retained: one northbound lane, one southbound lane, and a common turning lane.

Sidewalks that need to be replaced will be made wider (1.5 metres) and will include features like tactile strips at street crossings in compliance with requirements of the Accessibility for Ontarians with Disabilites Act (AODA). Where a new sidewalk is to be installed between John Street and Chaffey Street on the west side of King William, a barrier will be installed between the sidewalk and the angled parking spaces adjacent to the existing businesses. Any sidewalk sections not impacted by the construction that are still in adequate condition will be retained.

The current iteration of the work plan has construction divided into four stages, with work hours on Monday to Friday between 7 a.m. and 7 p.m. Alternate traffic routes will be posted to encourage those who are just passing through to take another route to help ease congestion.

Stage 1, currently planned for June 20-July 30, 2019, would occur in the northbound lane and sidewalk between John and Chaffey, with two-way traffic maintained in the southbound and centre lanes. 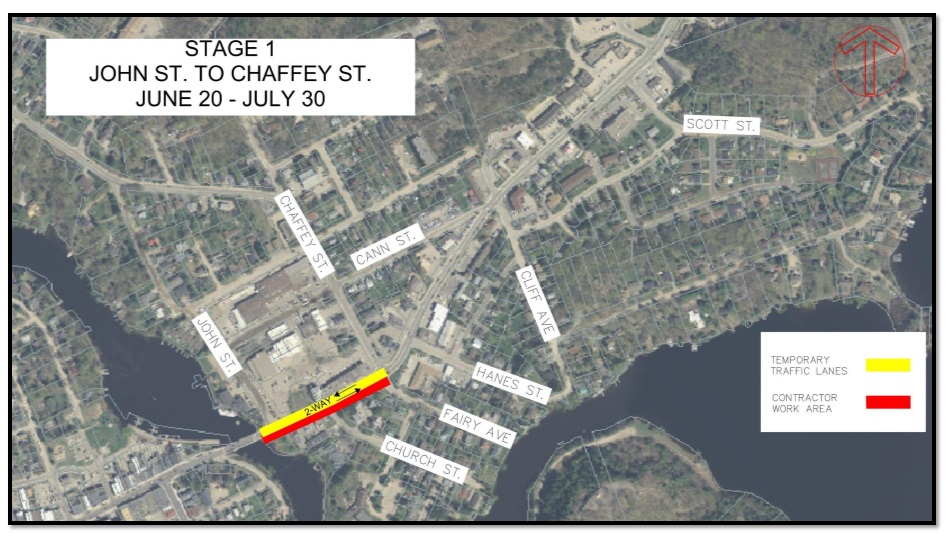 Stage 2 from Chaffey to Cann, currently planned for August 1-30, 2019, would occur in the northbound and centre lanes and the adjacent sidewalk, with northbound traffic using the southbound lane and southbound traffic rerouted along Cann and Chaffey. Depending on how the work proceeds, it’s possible that rerouting will only be required for a couple of weeks during this stage and two-way traffic could travel on King William for the remainder of the stage. Another option could be temporary traffic signals along King William to allow for a single lane of traffic travelling in alternating directions. 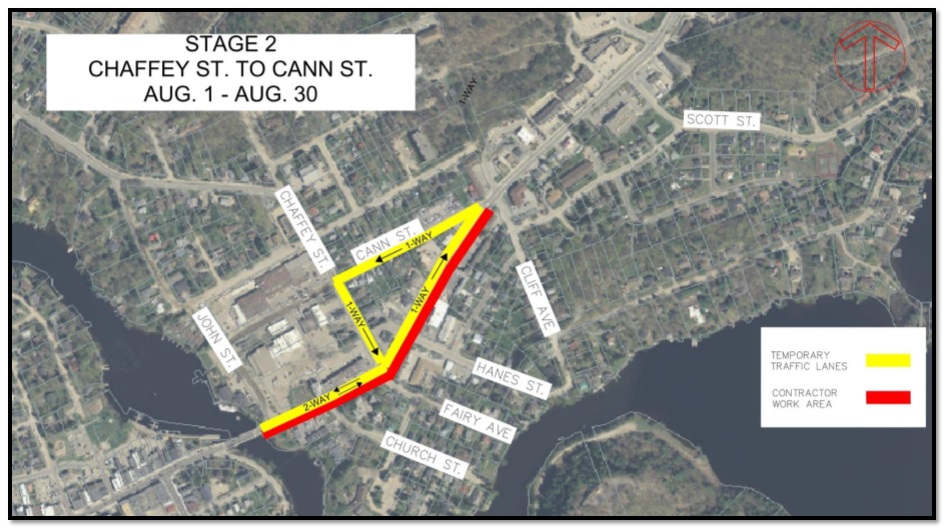 Stage 3 from Cann to Scott Street, currently planned for September 3-30, would occur in the northbound lane and sidewalk with two-way traffic maintained in the southbound and centre lanes.

Stage 4, planned for October 1 to November 15, would occur in the southbound lane and sidewalk from John to Scott Street, with two-way traffic maintained in the northbound and centre lanes.

Project details are still somewhat fluid as the full design phase is not yet complete. The District is seeking input from businesses and residents to help minimize disruption, in particular regarding access and deliveries to businesses.

“We clearly understand that June, July and August are the busiest time of the year in Huntsville, and our objective is…a minimum of impact to the businesses,” said Les Ranka, project manager with EXP, the firm awarded the design contract for the project. He noted that the contractor awarded the construction work will be required to maintain access to properties on each side of the street.

Throughout the duration of construction, ‘all businesses are open’ signs will remind drivers that they can still access all of the businesses along King William Street during construction.

Local business owners present at the meeting expressed frustration with the timing of the project, with some questioning why it couldn’t be held over to the spring of 2020 rather than starting in June of this year, or be completed during the shoulder seasons.

“We know that the summer season is critical in this area,” said Mark Misko, the District’s Director, Transportation and Engineering, adding that the District understands those concerns and wants to minimize disruption while still recognizing that this is work that must be completed. “We aren’t the only municipality that has gone through an urban reconstruction.”

Misko noted that they could look at doing work outside of the 7 a.m. to 7 p.m. window to accelerate the project, but that restricting it to shoulder seasons would stretch it into a multi-year project and that there are other projects that need to be completed as well. “We have a number of capital projects coming up and we’re looking at staging those as efficiently as we can to get the job done,” he said. “Some of that will mean some summer work.”

Other business owners wondered about compensation for the disruption, which Misko said wasn’t currently part of the project budget. Some expressed concern about water shut-offs during business hours, which he said could potentially be addressed by scheduling water interruptions outside of business hours or during less busy times whenever possible.

Several people wondered about the lifespan and capacity of the below-ground infrastructure, as well as the longevity of the road surface. One expressed concern about damage to adjacent roads, specifically Meadow Park Drive, that will see increased traffic thanks to the project.

The new storm and sewer infrastructure have a projected lifespan of about 75 years with the capacity to accommodate anticipated future urban growth, including increased volume due to the planned decommissioning of the Mountview wastewater treatment plant. A section of forcemain for that project will be installed as part of the King William project.

Ranka said that he is a fan of good drainage below the roadway and that ensuring that the road surface lasts as long as possible, with periodic maintenance, is the goal.

Regarding damage to side roads, Misko said that they’ve been in discussion with the town to ensure that any planned rehabilitation of those roads happens after this project is complete, and that maintenance will also be part of the construction contract so that any immediate concerns resulting from the project can be addressed.

Finally, one attendee wondered if any beautification measures along King William were being included in the project. Misko replied that it wasn’t part of the capital plan, and Mayor Scott Aitchison chimed in from the back of the room that those types of efforts would be the responsibility of the Town of Huntsville.

“I hear you loud and clear,” Aitchison said. “We do need to do more, there’s no question about that.”

If you missed the information session, you can view a copy of the presentation here (PDF). Also visit engagemuskoka.ca for ongoing updates about the project.