Staff with the District of Muskoka, J.B. Enterprises, and EXP Inc. involved with the King William Street construction project presented an update to about 30 residents and business owners on the progress and challenges-to-date during an information session on Nov. 5 at Partners Hall.

“We’ve cleared the first major block,” said John Bravakis, president of J.B. Enterprises. “Not as far as we wanted to be. We’ve had a few surprises along the way, mainly the largest contributor to our delays have been a Bell line, the main artery that goes through town, all the way from one end of town to Hwy. 60 and continues up Hwy. 11 from there. This has been our main challenge because it’s weaving right through our work zone.

“In addition to the Bell line, we’ve had an issue with the force main—a small (pressurized sewer) pipe that runs along side our excavation,” added Bravakis.

He said the problem with the force main is that it weaves around rock outcrops instead of going in a straight line, which is the modern standard.

“We had some good intel going into the project,” he said. “But we think we’re all clear because we’re putting the new sewers in the exact location of the existing [sewers]  so we avoid any rock breaking and blasting and so forth. So in essence, you have a sanitary sewer and a storm sewer running parallel to each other but what you have is the storm sewer, which crosses over the sanitary [pipe]  and back over again, around a big rock outcrop, back again and that’s been the nature of how the pipes were laid in the past. Lots of surprises. The good thing is we’re getting into shallower dig now.”

Bravakis said the situation was exacerbated because of the depth they’re working at.

“We’re over five metres deep in this situation—it’s really difficult because we have to build a shoring as we’re going and we’re not able to run a trench box, which we could pull through the soil,” he said. “We have all the utilities in the way, we’re staging and shoring and constructing as we’re going, basically supporting everything as we’re going. This was a little bit of a set back but we’re plowing on.”

The plan is to have crews working until the end of November, weather permitting.

“We’re looking to work until Nov. 30,” said Mark Misko, director of transportation and engineering with the District of Muskoka. “We’d like to work as far as possible into the winter, but we really have to start controlling the work going through there, so if we get a deep frost set in, we can close that out. The last thing we want is a giant, open excavation that all of a sudden we have to manage through the entire winter.”

Those involved with the project are optimistic it will be completed on target, which is late spring.

“Although we’re behind the anticipated schedule, we feel that based on the good work of J.B. so far, we’ll be able to pick up some or all of that schedule next spring,” said Les Ranta, project manager with EXP Inc., the design consultant on the project.

Weather will be a factor, with how long they can work into the winter and how early work can begin in the spring.

“J.B. will bring on additional work crews, as they can, and we will have more than one work area,” said Ranta. 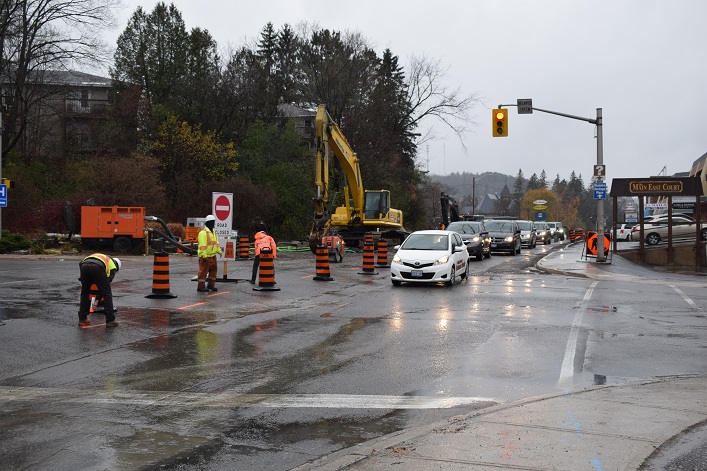 The required work for Main Street has been pushed back to 2021, with approval from town council.

“There’s a few advantages to this,” said Misko. “This allows us more design time, more communication time with the BIA and Chamber [of Commerce]  to look at some grants for funding, and to seek a tender less under the wire, see if we can get some more competitive pricing. The good news is EXP Inc. was the consultant brought on board for the design, so there is continuity from this job [King William Street] to the Main Street job.”

During the question period of the evening, residents and business owners asked questions ranging from concerns related to the Santa Claus parade to loss in business revenue with the road closures and limited access to some businesses.

One of the concerns is the time it takes to get from the four corners on Centre Street, near Festing Toyota, to Main Street.

One woman said it took over 18 minutes when she timed it one day, and said the traffic flow was better when there were automated lights at the intersection of West Rd. and Centre St. so traffic could flow both ways.

Misko said he appreciated the feedback and said the District would look into it and see if they could adjust the timing to get better traffic flow through there.

The District is also looking at putting up more signage for businesses that are affected by road closures, including putting business logos on the signs with advertising noting they’re still open even though the road is closed.

A couple of business owners were concerned their business might not make it through the construction period and fear having to close their doors.

Bravakis said his company has been involved with renovating a number of downtown cores and business owners in other towns had the same concerns.

“What works is social media,” he said. “Doing it on your own or as a downtown business page. I’m not telling you how to run your business but this has been really helpful in other towns we’ve worked in. They target their customers and show a map and say here’s how you get here.”

Bravakis said his company will work with business owners to establish better communication and a closer relationship so they can help keep delivery schedules on target and customers coming in.

“We’ll work with getting you in touch with Dave [Cottrell], our logistics and public relations manager, and work with you on getting customers in, getting your deliveries in and product in,” said Bravakis. “You have to reach out to us and we can help you. The last project we did downtown was Main Street, Penetanguishene. We had the same town hall meeting, probably three times the size of this [meeting], it was a very large construction zone. It was about two kilometres, double the size of this one. It went from one end of town right out the other and interrupted all those businesses. Dave was huge in implementing the logistics of getting deliveries and customers in. We got to know every business owner and everything going on with their business. It’s part of the deal, this is why we’re here.”

“Please give me a call,” added Cottrell. “We’ll do everything we can to help you.”

Business owners and residents can follow the project and receive updates by visiting engagemuskoka.ca and following the links to the King William Street project.