You are here: Home / News / Past performers reflect as Deerhurst show takes its final bow tonight

For 35 years, dancers and musicians have taken to the stage at Deerhurst Resort for high-energy, performances in one of Canada’s longest running musical variety shows. Tonight (March 19), that era comes to a close with the final performance of the HIT L!ST, the show’s latest incarnation.

It all began back in the early 80s when Deerhurst owner Bill Waterhouse stayed at Innisbrook Resort in Florida. They had a large-scale, Vegas-style production and Waterhouse wanted one just like it for Deerhurst.

“For Bill, entertainment was a big part of Deerhurst,” said Suzanne Baxter, who was one of the show’s original dancers from 1982 to 1985 and returned from 1993 to 1999. “He wanted a show just like that so he approached the producer, Bud Matton, but Bud had no desire to come north. Bud’s assistant, Brian Ayres, said ‘I’ll put on a show for you’ though, and he managed to bring some incredible musicians and dancers and singers with him. He had a well-rounded group of serious talent.”

Ayres built on the show that Waterhouse wanted, says Baxter, and brought along an emcee who embodied the spirit of it. “Brian had a knack for showbiz and for putting together songs and medleys. Along with him came Frankie Vogl – he was Canadian but he was the emcee of the show in Florida – they called him Mr. Showmanship. He could read and work an audience like no one could and he was a pivotal part of the show.”

The show was initially just a part-time offering. But in September of 1982, it became a full-time affair with performances six nights a week. “It was a great time as far as entertainment goes,” says Baxter. “Live entertainment of that type was appreciated back then. In the early 80s there were lots of people who came to Deerhurst and everyone came to see the show. Over time it was promoted and talked about – everyone knew that the show was there.” 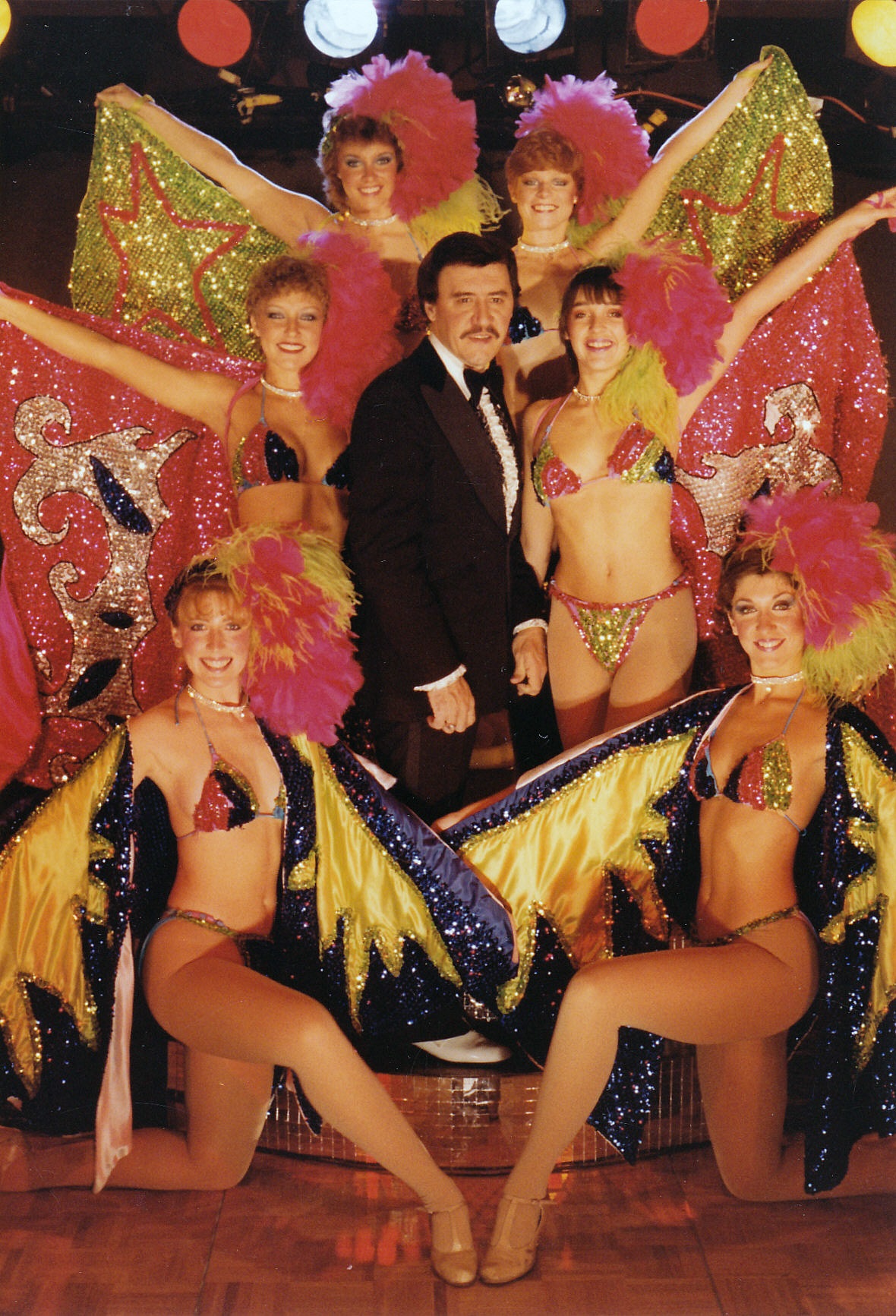 Frankie Vogl and the show girls 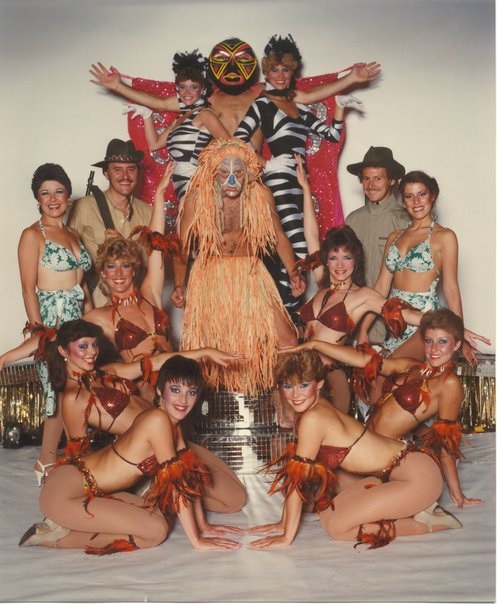 The full cast of the Africa show

“It was hard work,” says Annette Casullo, another of the show’s original dancers from 1982 to 1985. “At the beginning, the shows were a big production – Vegas of the north – and during slow times there were more of us on stage than in the audience. But the show developed a great reputation and it was an important learning ground for so many talented people.

At that time the cast lived on the property, an arrangement that allowed them to develop special bonds. “It’s hard to describe,” says Baxter. “It was a time and a place like no other. You had these wonderfully talented people coming from all over and we were taken in as family. We all lived together in various cabins and whatnot on the Deerhurst property, we all worked together and rehearsed together and partied together. Bill Waterhouse wasn’t just an employer, he was such a good friend. It was a pretty magical time.”

They got into some hijinx, too, says Baxter. “We were all in our early 20s and when you’re doing the same show night in and out, you start getting goofy. Half of us came out in a kick line once with those glasses that have a nose and mustache attached and the other half didn’t know it until we turned around. When we did that sort of thing, the audience knew something was up but they weren’t in on the joke. In the 90s that was stopped – we weren’t allowed to do that kind of thing on stage anymore.”

Many of the original show girls from the 80s are still connected years after having moved on. “It was this special bond,” says Casullo. “We had lots of great times and it developed into a family. We get together every year somewhere. In 2007 we did a 25-year reunion, and then later a 30-year reunion.”

The show evolved in the 90s, becoming the Sing show – Sing 93, Sing 94, Sing 95, and so on. “It was more like the more recent Decades Show. It was a bit different from those Vegas-style productions but it was still a great live show,” says Baxter. And the cast was no less tight-knit than before. 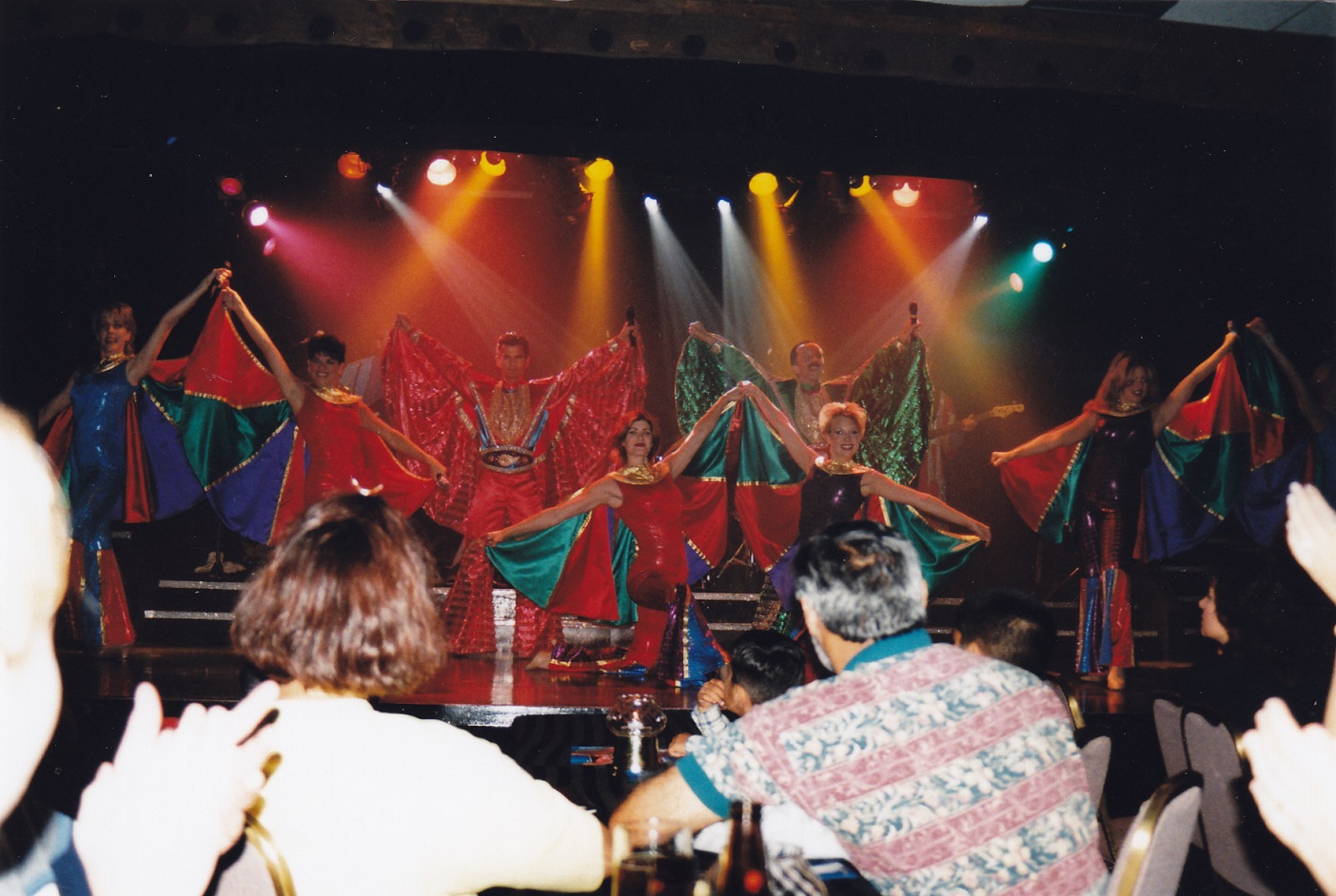 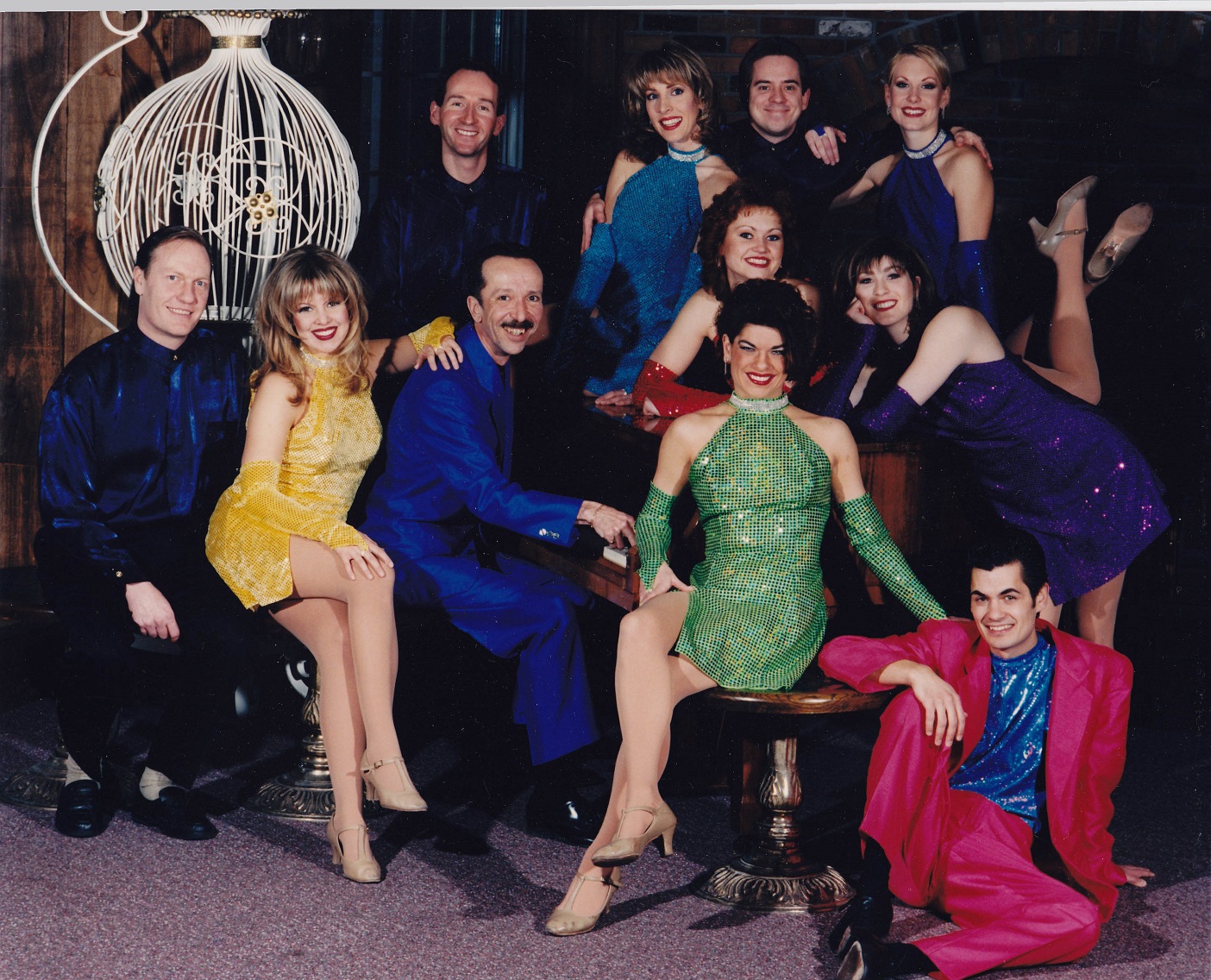 Parres Allen was with the show from 1996 to 2008, save for a year’s hiatus in 2003. “We always had a lot of fun. We partied together in the summer, we had these epic, themed Halloween parties where everyone went to the nines with their costumes, we would go out and party after shows. We liked to have a good time.”

On stage, it was no different. “The show’s job was to create this atmosphere, and it did. And there were some cool things, like the celebrity connection with Shania (Twain). She made a number of appearances so we got to entertain her, including once when we were doing a Shania medley and got to sing Shania to Shania.”

In more recent years, the show transitioned from the Decades format to the HIT L!ST, a show that encompassed both the best of the show and the songs the performers loved. 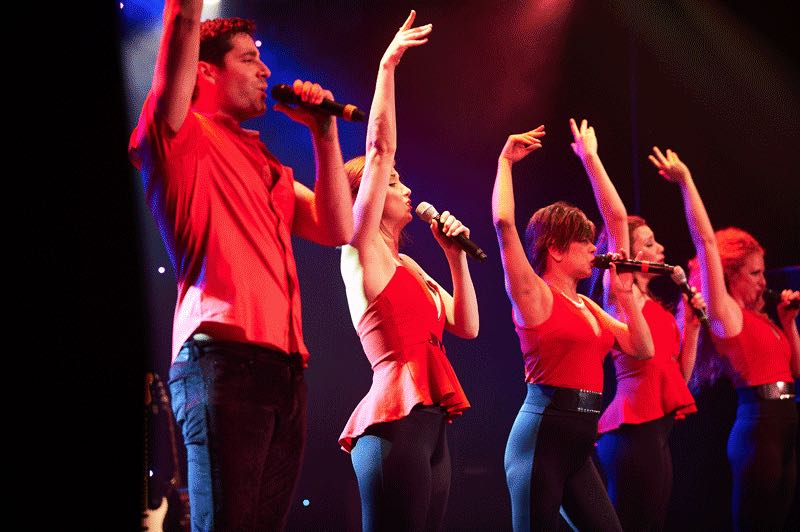 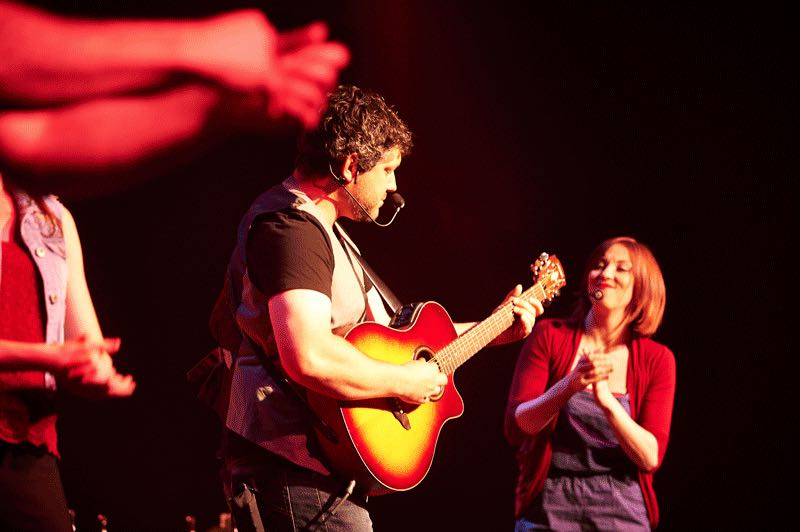 Will Main on guitar 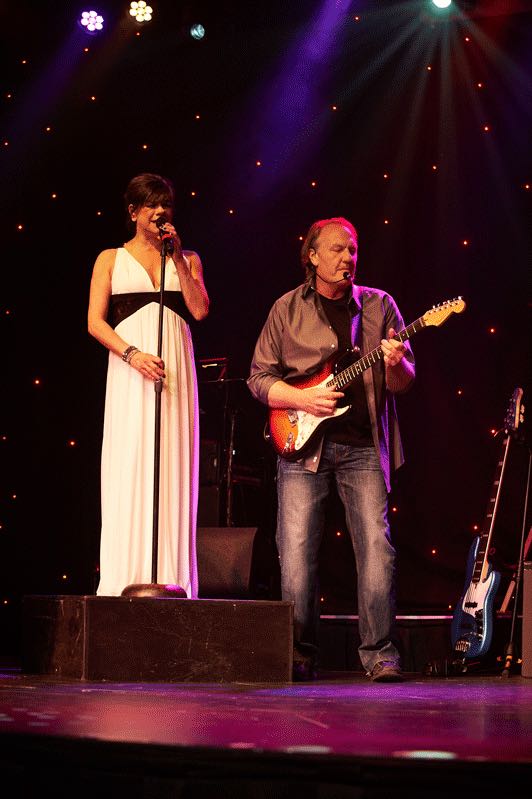 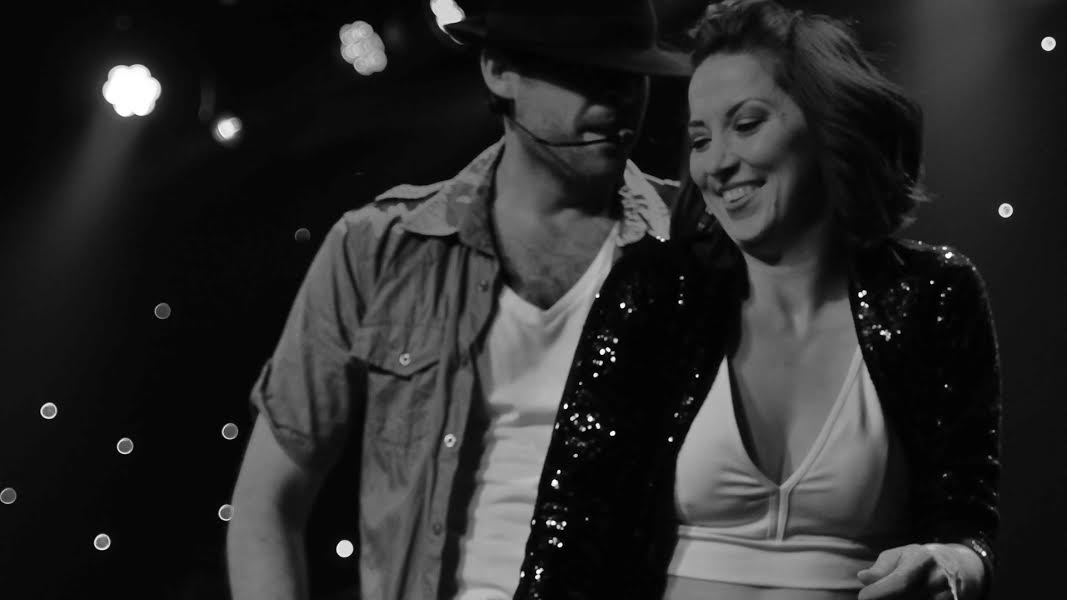 When the original lodge at the resort – the location of the ballroom where shows were held until 2014 – came down earlier this year, it “caught at everyone’s heartstrings,” says Casullo. And past performers are sad to see the show come to an end now, too. “I’m sad to see it go. It’s the end of an institution. But it has nothing to do with the great talent – they’ve been keeping the dream alive.”

There’s a special magic to a live show like the one at Deerhurst, says Kasey Stephan, the show’s current manager, and the cast is disappointed that audiences will no longer have the same experience.

“Everyone is really disappointed but we are really grateful that we were part of it,” says Stephan. “That era of the big production numbers is over. We are sad that the show went down under our watch because it has such a great legacy.”

But for tonight, they’ll focus on the show. “I’m sure there will be lots of celebrating,” says Stephan. “And we expect to see some old cast members back to bid their farewell. It will be nice to have that closure.”