Main image: Councillor Jonathan Wiebe presents council with a plan to add 26 tiny homes to the housing market at its March 22 meeting.

Homeownership, particularly for those entering the market, has become next to impossible for many people in the community.

Huntsville Councillor Jonathan Wiebe, who also sits on the Town’s development services committee, has been studying the issue and shared his findings, and a rough plan on how the municipality could get involved, with council at its March 22 meeting.

“There’s a couple of stats here that might shock you,” he told his fellow councillors. He said when he started doing his research the average price of a non-waterfront home was $550,000, and in just a few months that number had risen above $600,000.

“That’s what’s making homeownership and affordability so difficult,” he said. “At the end of the day, I think we all know if you ask anyone what’s the housing situation like, it’s tough. It’s expensive and people are getting bid out by cash buyers and it’s very difficult for people starting out.”

Wiebe harkened back to war-time housing when small houses were constructed on small lots. He showed council a slide of what wartime housing looked like circa 1942. “You will probably recognize some of these homes in some of the smaller and larger cities. During that time, we had a real crisis on our hands. We had soldiers coming back from war… there was a lot of economic instability and many governments all across the nation decided that they would create small lots… and allow people, or go ahead and build, small houses and that was a strategy that worked quite well in order to try and find people housing,” he noted. “We figured out ways to solve the housing crisis that we… were having all over this province, all over this country.”

Wiebe said it is currently very difficult to get from any type of rental housing into stable homeownership and building costs have increased as well, running at about $350 to $400 per square foot, which is more of a reason to consider the construction of small and tiny homes. “That starter home—that fixer-upper that young people, or people starting out, or people making a change, used to be able to rely on—those simply aren’t there.”

Wiebe told his fellow councillors that many municipalities, Huntsville included, are moving away from zoning which requires a minimum square footage of 800 to 850 square feet. That means that anyone wanting to build a tiny home, provided they meet building codes, can do so.

“So they would have to work hand-in-hand with our municipality… but it can be done and those type of strategies of self-build are an excellent way to keep your costs down and I know working in the trades around these parts there are plenty of guys and gals who have the skills and have the energy but maybe lack the opportunity,” he said.

Wiebe showed council various examples of small or tiny homes and suggested such a neighbourhood could be developed with 26 lots on Town-owned lands on Florence Street. 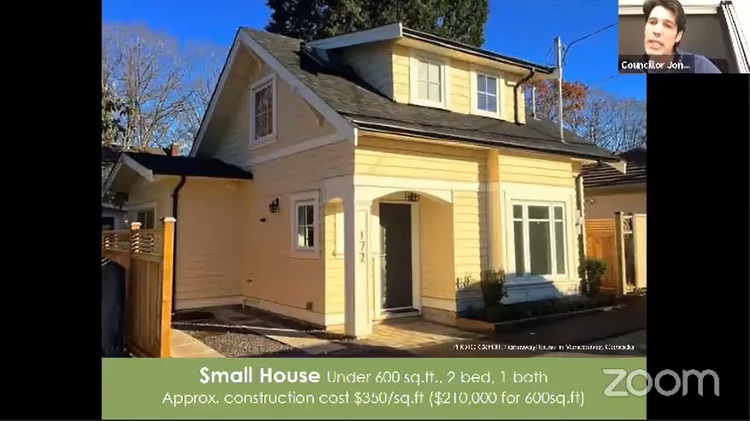 He said the town is well underserved as it pertains to starter homes and the municipality could play a role in relieving that pressure. “I think we would relieve some of the pressure on the rental market. You know, it’s incredibly difficult to find rentals. With all the growth of any housing stock, especially at the more affordable bottom end, we would help also in alleviating some of that rental pressure. Obviously, we’d employ local trades and create local opportunities for self-builds. We would create 26 taxpaying lots, 26 new homeowners, let’s say, which would be great for the overall tax base.”

He told council he’s hoping it might also spark some innovation in the alternative housing market. “I’d like to see some of the builders veer towards some of the smaller products and be able to maximize efficiency. If there’s an appetite and an opportunity for these types of builds, I’d love to see people getting more into that space.”

Councillors thanked Wiebe for his efforts. Deputy Mayor Nancy Alcock said she liked the concept of using town lands and smaller builds to keep costs down. “What you’re proposing is, look we’ve got a parcel and Huntsville’s already on the map for this because we’ve already contributed municipal land for another project. Probably we would do some things differently and that’s all for the most part rental,” she said referring to a proposed development on municipal land at Sabrina Park, which has not moved forward as anticipated.

She told Wiebe and her fellow councillors that homeownership is equally as important and said she’s fully behind the idea.

Councillor Tim Withey, who said he was playing devil’s advocate and hoped he would not be interpreted as being negative, said Muskoka was feeling the effects of “everybody wanting to move here.” He said in speaking to contractor clients of his, they’ve noted that “material costs have gone through the roof. As you know a 2×4 is multiple times more expensive than it was.” He said the housing boom in Muskoka isn’t helping affordability but “there are places in Ontario where there isn’t this boom.”

He questioned how the neighbourhood around the proposed Florence Street development might feel at having a tiny home community in their backyard. “As we often see there’s a lot of nimbyism out there and they might think ‘something next to my house might devalue it down the road’ when this activity backs off a bit.”

Withey said he thought the municipality had surplus lands further away “that might be actually far enough away from close proximity to people that have larger homes that might be concerned about this type of thing.”

He also said contractors might have difficulty finding tradespeople because “similar to what’s happening in McDonald’s and Tim Hortons, they’re bringing up framing crews from Barrie because there just isn’t enough people around to build the houses they’re building now. So there’s another fly in the ointment, if you will, that there isn’t a lot of tradespeople sitting around looking for something to do and they’re coming from far away to build places here because the demand is here right now…”

Withey also said some form of subsidy would likely have to be put in place to persuade builders or contractors to make less of a profit than market forces currently dictate. “The growth that we’re getting, it is unbelievable which you know in a free-market society is driving these prices, and throw on top of that lack of workers and huge material costs. It’s a tough nut…”

Wiebe said some creative thinking would need to take place. “You can make it possible because to say that ‘well, I don’t know, it’d be tough,’ that’s how we got here…”

Councillor Jason FitzGerald said the way the housing crunch needs to be approached is by building community. “This community was founded on people helping each other and building community and we can’t worry about nimbyism and what’s next door. It’s time to put all that aside and say ‘this is what we want to do, we need to make this happen,’ and it’s not about capitalism, it’s about giving people the right to become a successful and integral part of this community. And this is a great, great way to do it. Let’s get some people out of the rental market or hotels because I don’t think anyone realizes the hotels are filled with people who can’t find accommodation.”

Councillor Brian Thompson said the reason many people want to live in this area is because “we are a progressive community and it’s just a great place to live and its because of initiatives by councillors like you that are doing it today but have done it in the past.”

Councillor Dione Schumacher said she liked the idea as well as looking at other forms of alternative housing. “So many people now, and especially a younger generation, want to move to that more minimalist lifestyle,” rather than larger homes, she said.

Council agreed to engage stakeholders and explore the idea further.