In 1993, shortly after moving to Huntsville and long before she became a locally renowned fibre artist, Pam Carnochan discovered the Muskoka Autumn Studio Tour and vowed that one day she would be one of the artists on it.

“I had done no art in years at this point and I never had any formal training. I was just a very fledgling artist wannabe,” she says. “Twenty years later I got on the tour, and it was all because I had started this watercolour with wool.”

Pam credits fellow artist Sherry Peddie with getting her started. “She was teaching how to do needle felting through the spinners and weavers guild. I had been doing wet felting but I had never tried needle felting. The first time I tried it I was like ‘Wow, this is mind-blowing’. I was addicted.”

Her excitement hadn’t abated when she returned home so she took a piece of commercial felt from her daughter’s craft basket and decided to try to make a painting on it using this new-found technique, calling that first piece Ragged Falls. “I thought it was kind of tongue-in-cheek with the wool being the medium.”

She was hooked. “When I started it, it felt like I had come home. It felt like the thing I had always been meant to do. I had always liked doing watercolour painting but there was something lacking. I always loved wool and I had been doing felting since the eighties. It was a perfect blending,” says Pam. “I’m not even good at drawing, I’m not that kind of an artist. But I can get detail with watercolour with wool that I can’t do with any other medium and I don’t know why. It’s sort of like sculpting meets painting and it’s my most natural way of conveying art in the world.”

Two of the things that set her work apart from others who do wet felting, which involves layering pieces of wet wool to create a solid piece of fabric, and needle felting, which uses barbed needles to tangle pieces of wool together, is that all of the wool comes from the sheep on her hobby farm at The Morgan House Bed and Breakfast and she leaves it in a raw state to add texture and interest.

“It still has all the crimp and the flavour of raw wool that has some colour added to it,” says Pam. “I’ve tried to do it with alpaca, but I find it boring. It’s beautiful and it’s soft but it’s too straight. It doesn’t have the interest to me that sheep wool does.” 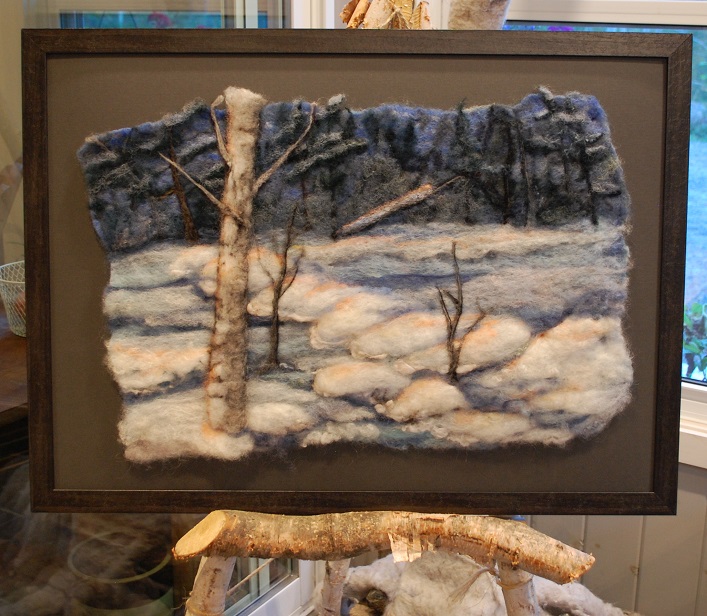 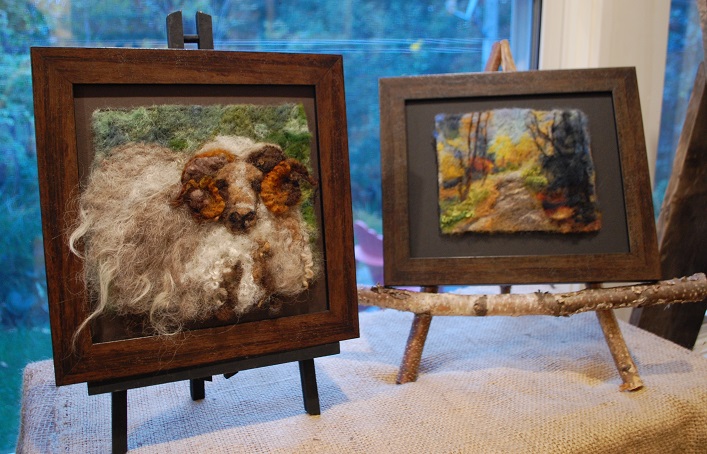 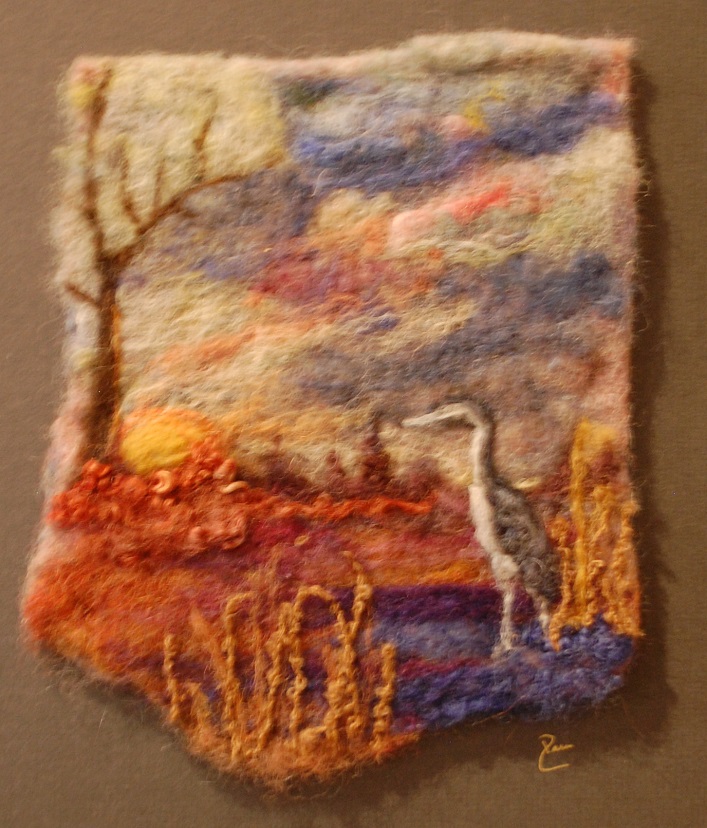 A variety of wildlife make their way into Pam’s creations 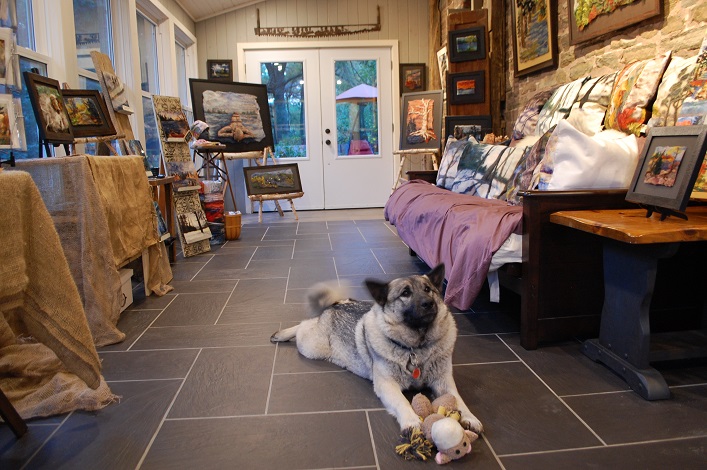 If you visit Morgan House during the Muskoka Autumn Studio Tour, you might even meet Stanley

Pam shears her sheep, who she calls ‘her girls’, herself. Right now she has two, having lost three in the last year to wolves or coyotes – a hazard of having a hobby farm in Muskoka – and is considering more along with some alpacas or a donkey for their protection. For now, the girls get locked in the barn every night.

Once she has the raw wool, she then dyes it using a variety of techniques – natural dyes, acid dyes, Kool-Aid, “the whole gamut, depending on what colours I want. But I don’t want to dictate the process, so I mix dye in a pot and wait to see what colours come out. Sometimes it’s absolutely phenomenal.”

Pam wet felts background pieces without any intention for what the finished piece will look like. “I like that there will be a surprise, and it will be what it will be,” she says. “I can try to lay out colour that might suggest a tree or a hill or something else, but I don’t have my hopes and dreams tied to it.”

‘The girls’ earlier this year. One was killed by a wolf or coyote in the spring. 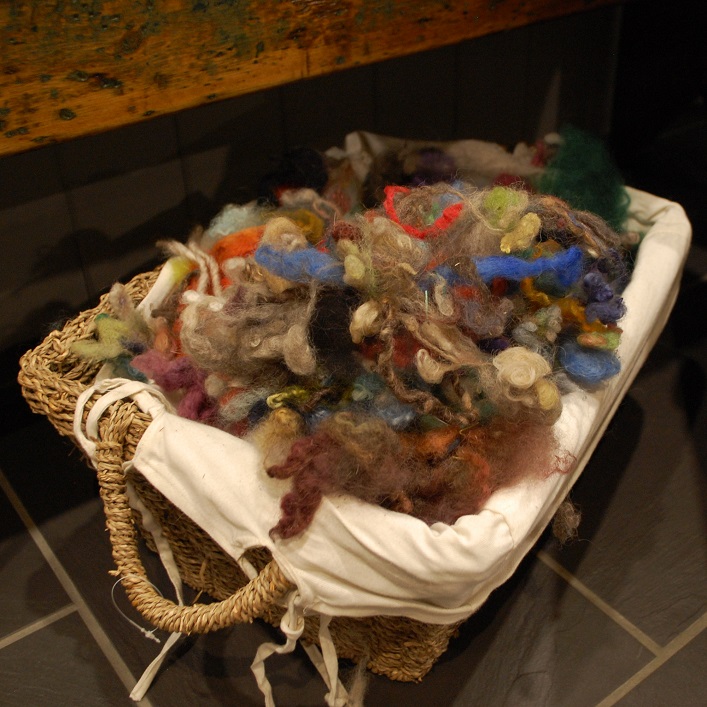 Pam dyes the wool by hand 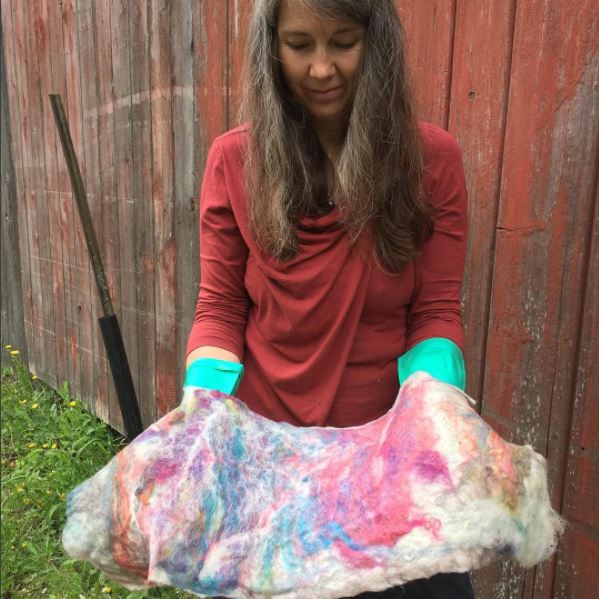 Pam with a new piece of felt (Photo: @morganhouseart on Instagram)

You can see Pam’s works at the Wool Works Studio during the Muskoka Autumn Studio Tour this month (see details below). It’s a great way to see where artists create and ask them questions about why they have chosen their particular craft and what their process is. Sometimes there are snacks, too. And friendly dogs, like Pam’s Norwegian Elkhound, Stanley.

All of the studio tour artists offer works large and small for sale, understanding that not everyone wants, has room for, or has the budget for large-scale art. Pam’s watercolours range from large framed or free-hanging pieces right down to tiny works just a few inches across.

“Very large originals aren’t the only pieces available to people (on the tour) so that you have a chance to still go home with some art,” says Pam.

Images of Pam’s creations are reproduced on other objects, too: snuggly pillows, toques and buffs for extra warmth on chilly days, and even coasters. 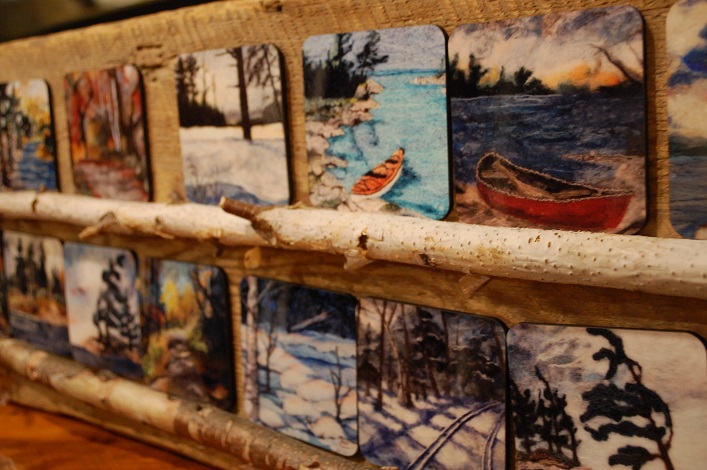 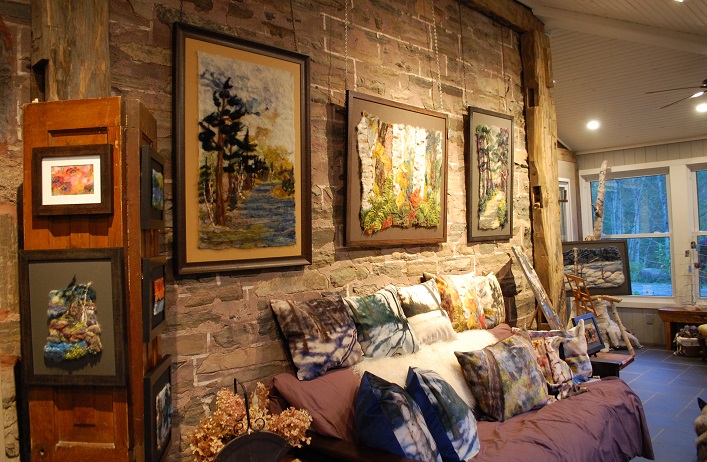 In addition to the Muskoka Autumn Studio Tour the next two weekends, Pam will be presenting collaborative new works with blacksmith Deb Harkness in a concept show, Steel Wool, at the Chapel Gallery in Bracebridge in November.

“I’ve coined the phrase ‘blacksmiths make things hard’ because (Deb) has challenged me in so many ways, but the number one is the size and scale,” laughs Pam. “It took me three months to catch up to her week’s worth of work. I had to figure out how to speed up my process so I didn’t get bogged down in the nitty-gritty details of my watercolour with wool.”

Those pieces, she says, are more fluid and abstract and impressionistic than some of her other work. “It’s quite fun. I hope people like them.” 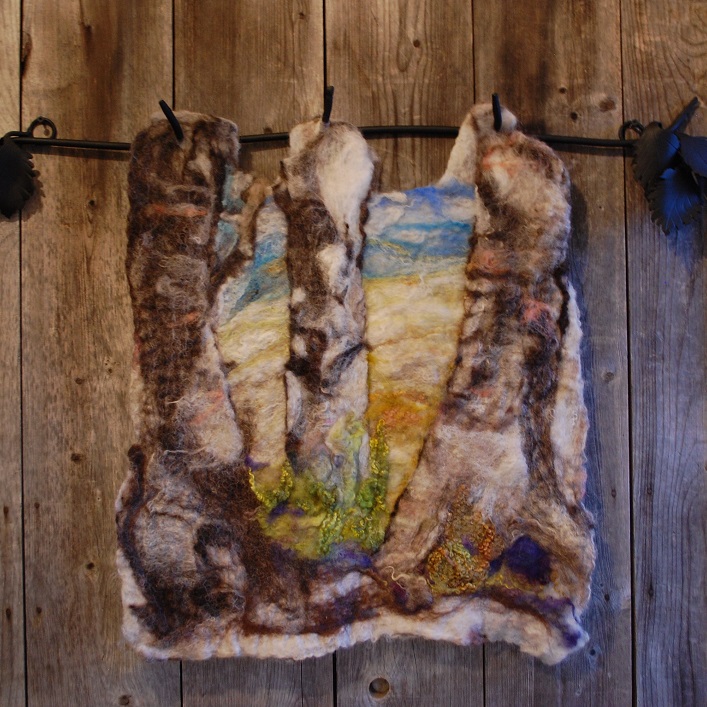 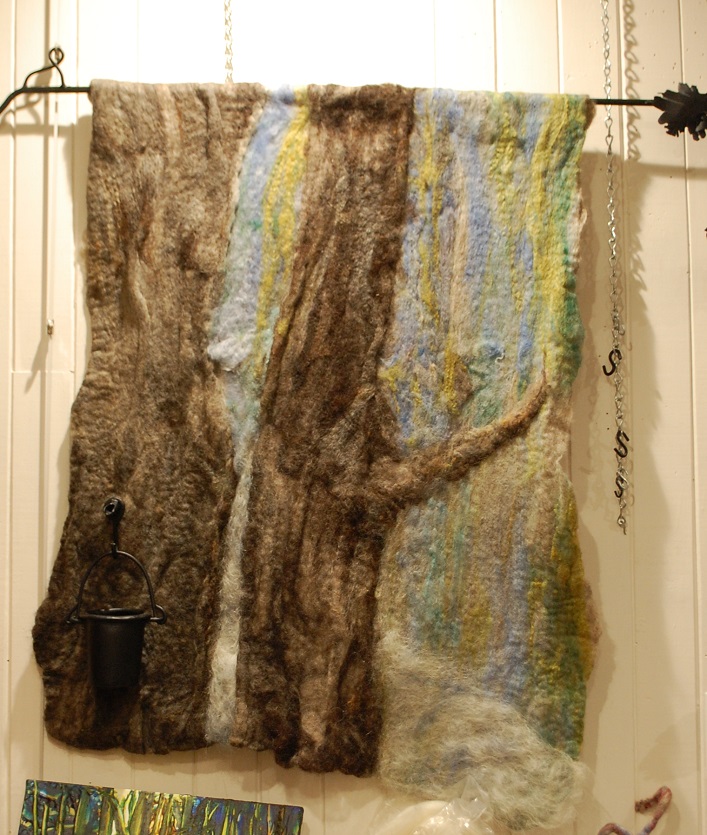 Pam is working with blacksmith Deb Harkness on a concept show that will include this piece, complete with spout and sap bucket 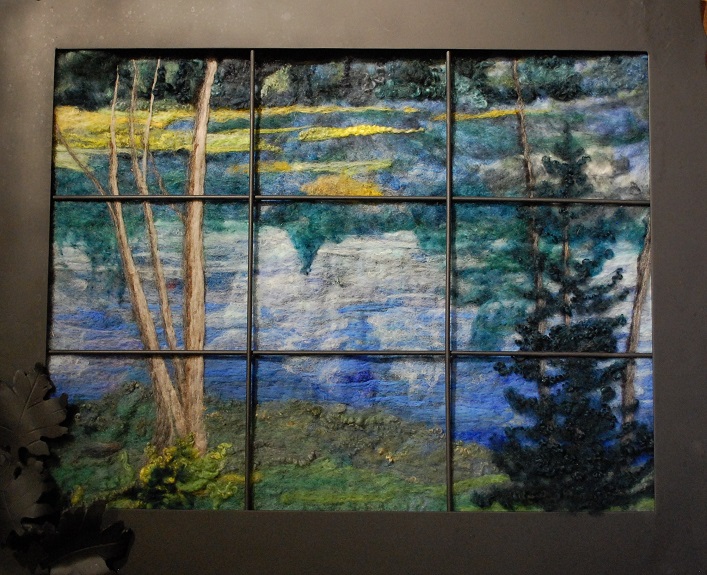 The view out this ‘window’ is the pond at Morgan House

“The thing that’s really exciting about the studio tour and the reason I am just so buzzed up about being on it, is this tour is Canada’s original studio tour,” says Pam. The Muskoka Autumn Studio Tour is now in its 39th year. “Think of how many communities in this country of ours have studio tours and it all spawned off of this one. It’s very thrilling for me and I am so grateful to be on it.”

The Muskoka Autumn Studio Tour runs September 23 to September 24 and September 30 to October 1, from 10 a.m. to 6 p.m. each day. You can find a map of the studios and more information about the artists at muskokaautumnstudiotour.com.

What is poetry? It’s “language at its most distilled and most powerful,” according to […]

Sarah Spring is a gifted composer of rare delicacy. Her music has the […]

Remember, the Weak-Two bid is based on a weak hand of about 10 points including two length points and a good suit of six cards.