You are here: Home / Community / And the drum goes boom: Barry Hayward is more than just a guy with a drum

Barry ‘Bazza’ Hayward has always walked to the beat of his own drum.

Chances are you’ve seen and heard him. He’s the guy who wears a long and colourful Dashiki, which is a traditional garment in Africa worn by men. Around his neck is a collection of funky necklaces. Each of them tell a story of a special friendship made or where he’s been, and that’s a lot of places considering he’s travelled to four continents. An eccentric 59-year-old, Barry is a real free spirit. He has a big, loving heart and finds happiness in giving back. In fact, he’s dedicated an increasing amount of time and energy to a life of service. Translating the privilege and opportunity he’s had in his life into action on behalf of those whose journey has been much more difficult and challenging brings him joy.

Barry’s a drummer, and right about now he’s switching into high gear. With summer right around the corner, it’s the busiest time of year for him. Whether he’s performing solo at a charity function, a wedding or a funeral or leading drum circles at local events like the upcoming downtown Canada Day celebration, Firefly Festival and Sidewalk Sale, Barry will fill the summer months by doing what he does best: beating the drum. It ignites a passion to be creative. Even before he was a drummer, he sang in church and choirs. He’s a big fan of the radio, too. It’s been a life-long love affair, he says. Music is his thing. It’s what he was meant to do with his life. 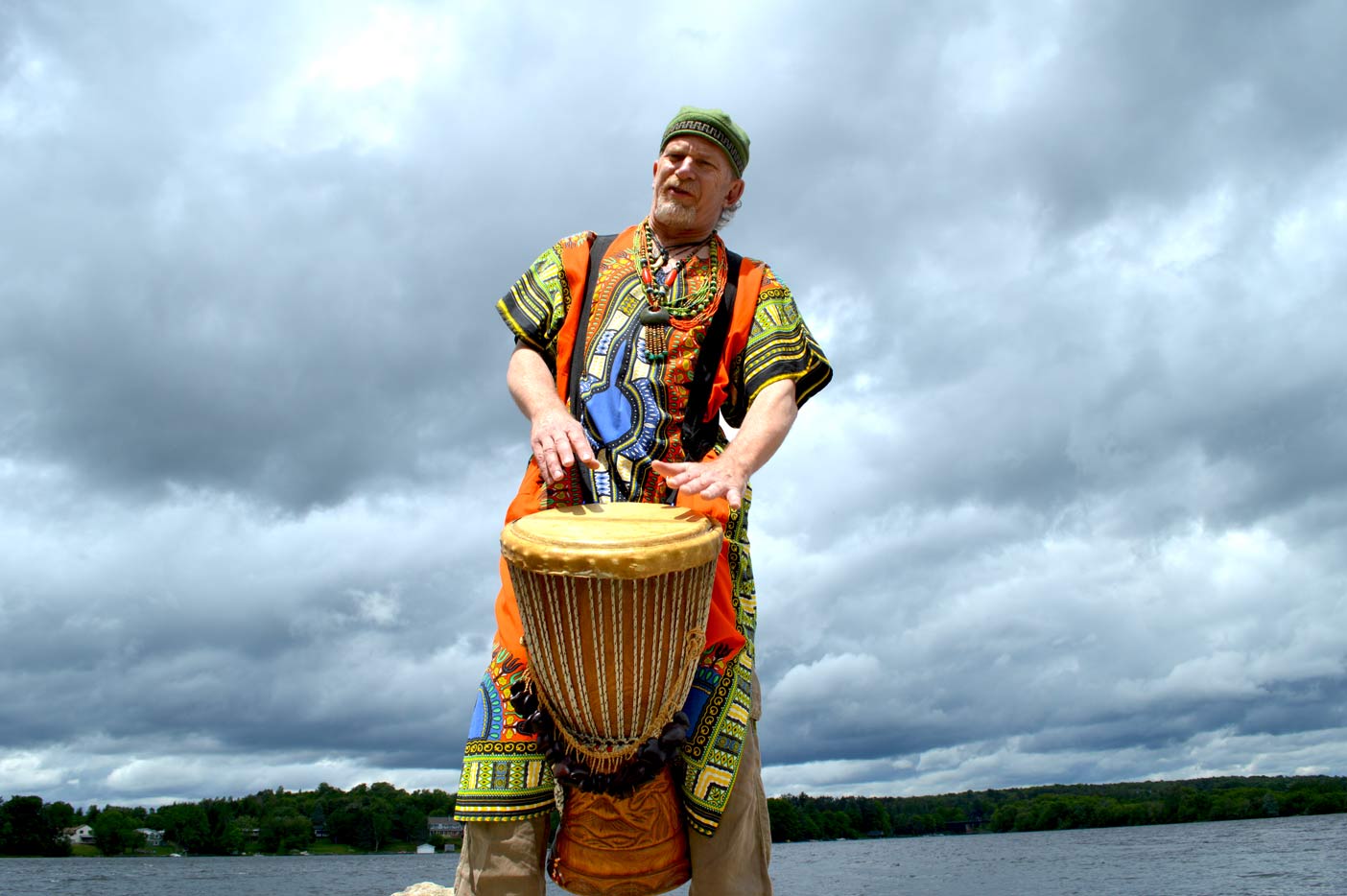 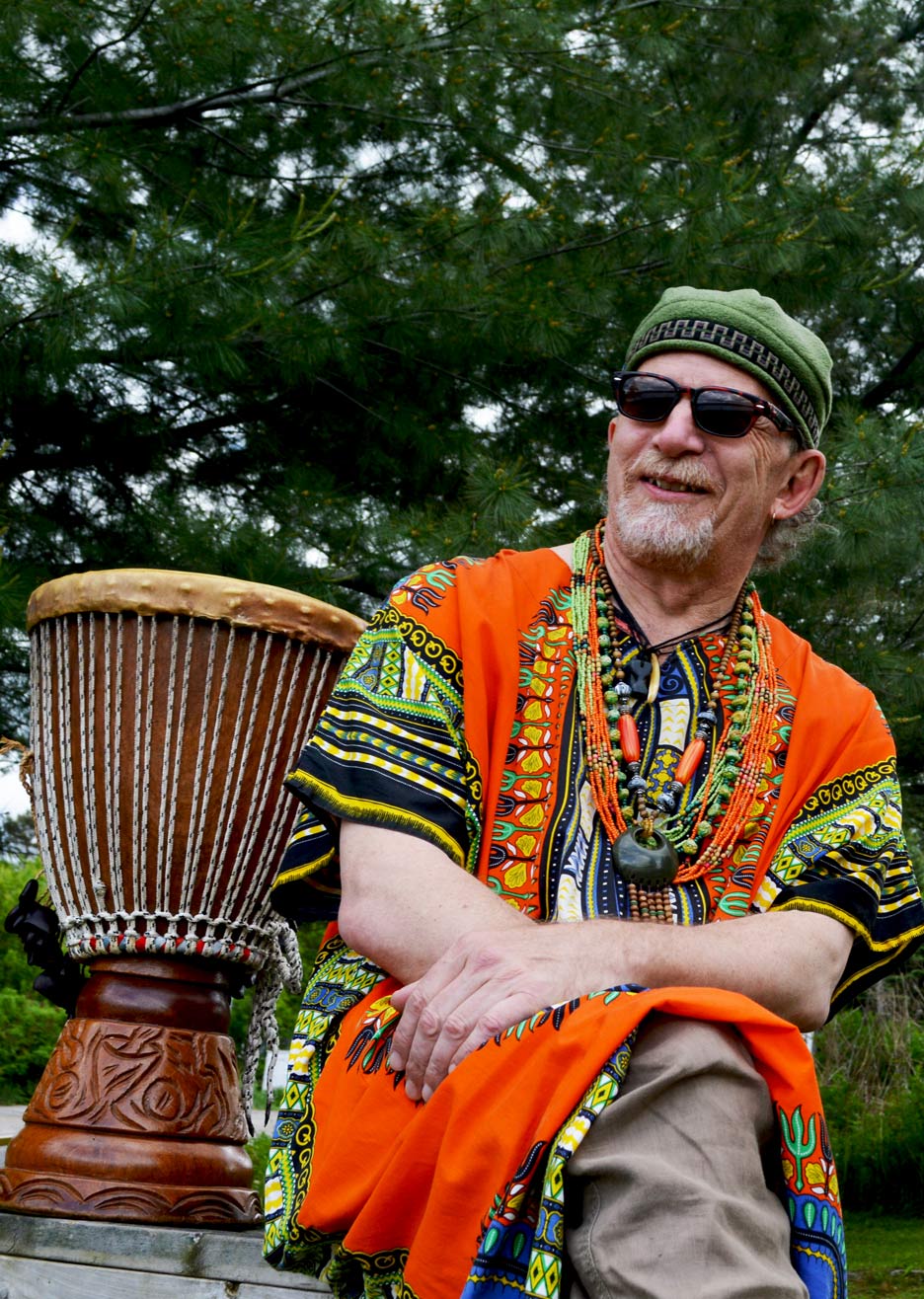 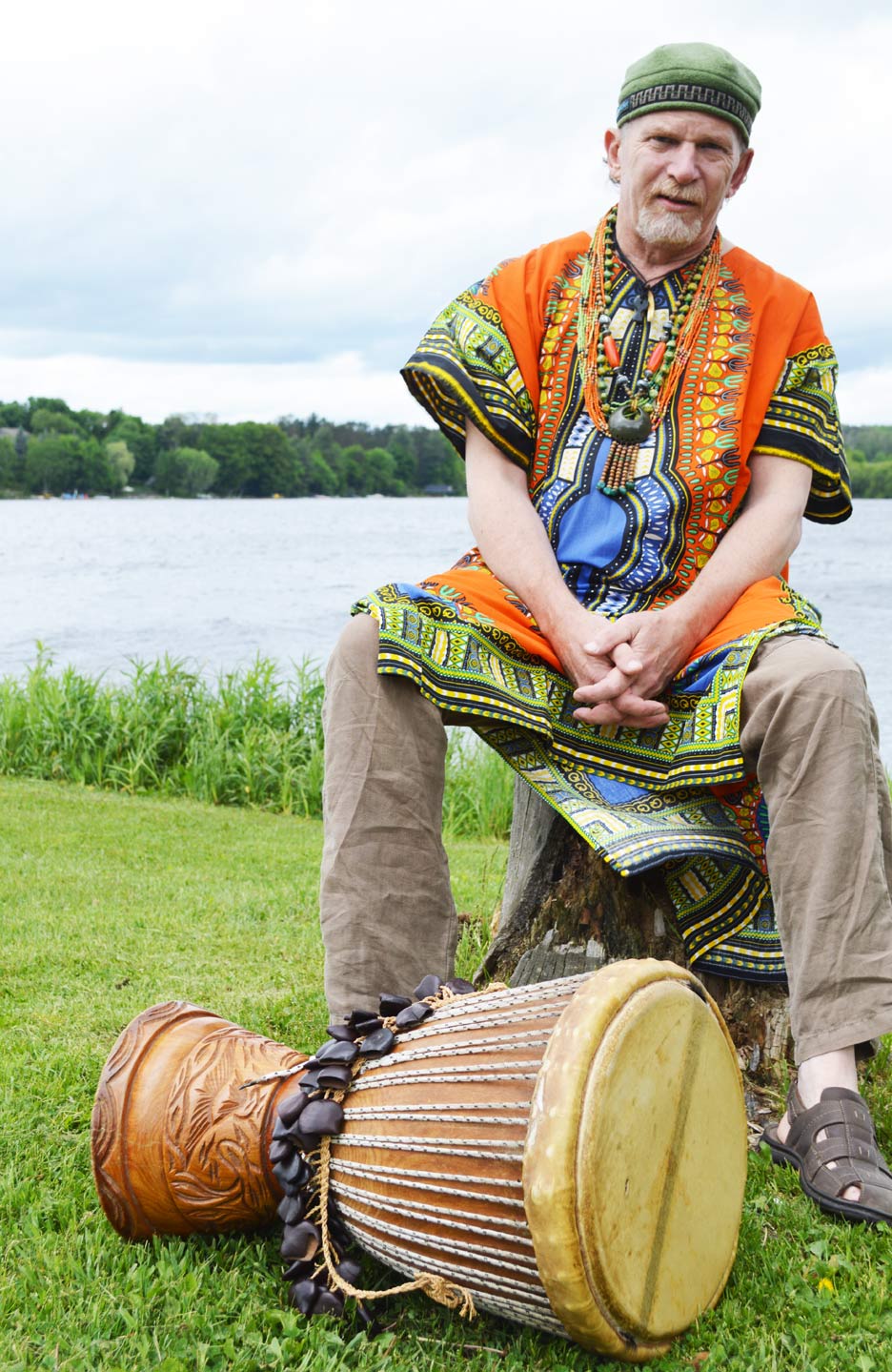 (Above) First Barry Hayward found his voice, then he fell in love with the drum. He’s got a really neat energy going on. He smiles a lot and appears genuinely happy and content with who he is. He leads a drum circle on Thursday nights at the Active Living Centre – fun for the whole family!

“In the early days, if one talked about drumming as ‘therapy’ or having some therapeutic value, there was little science to back up that theory, although the anecdotal evidence was irrefutable,” says Barry. “Nowadays there is a growing body of research, particularly in the fields of neuroscience and immunology, to support the notion that drumming and music-making can have a positive, measurable impact on health.”

Until he discovered the drum circle, he had never thought of group drumming as such a powerful vehicle for personal growth and healing, community-building, creative expression, and organizational development. When he first started facilitating drum circles in 2000, it was still considered to be a kind of ‘out there’ activity. But over the last 15 years, it has become an extremely accepted, even mainstream, activity.

When so much of the conflict in the world arises from our fixation on what we perceive makes us different from each other – skin colour, language, ethnicity, faith, those who have and those who don’t – it seems to me more essential than ever we find ways to bring us together and not drive us apart.

Although he just finished a four-year stint as host of a morning show at a local radio station to return to drumming full-time, Barry is also currently involved in humanitarian development projects in Kenya, the Democratic Republic of Congo, and Angola related to HIV/AIDS and education. He assists in using drum circles as a vehicle here in Canada to educate and raise awareness about those projects, raise funds, and bring people together in community to drum and make music and celebrate our common human experience.

In a way, Barry is sort of like a music teacher. All too often he encounters a person who suffers from what he calls ‘musical trauma,’ which he basically describes as a negative experience – perhaps from a tyrannical teacher or an unsupportive parent or friend – that prevented someone from enjoying the wonders of creative expression. Maybe they’re afraid to dance or sing or pick up a paintbrush. Deep down, Barry wants to help. And through a little bit of positive persuasion and coaxing, in many instances, there’s usually a success story. He knows how to make people feel comfortable. And being part of a drum circle is one way to do it. No one is centred out. Everyone is part of the experience. And nothing can beat that feeling when Barry is able to help someone conquer their fear and then hears that they bought a drum and have been playing ever since. 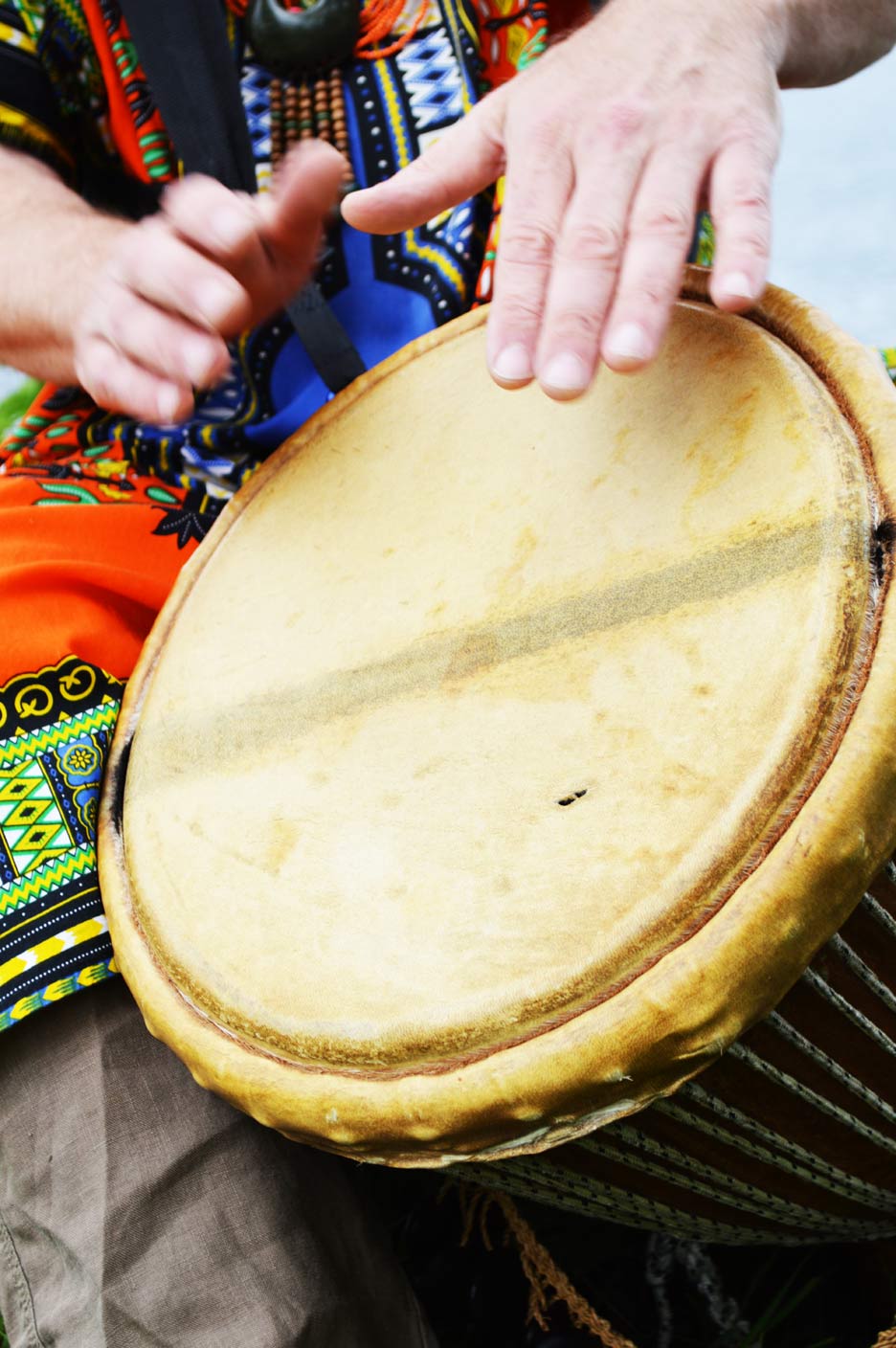 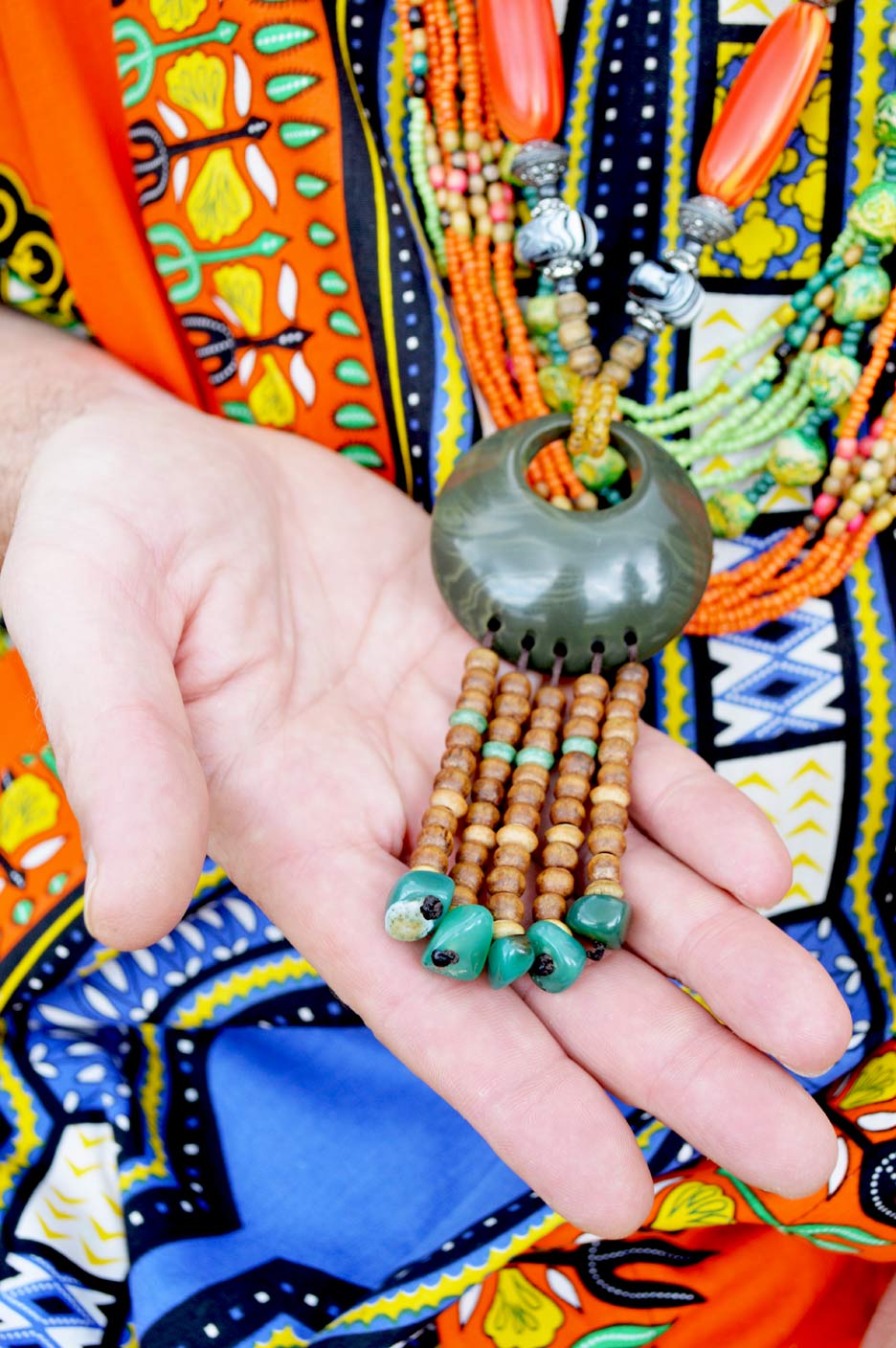 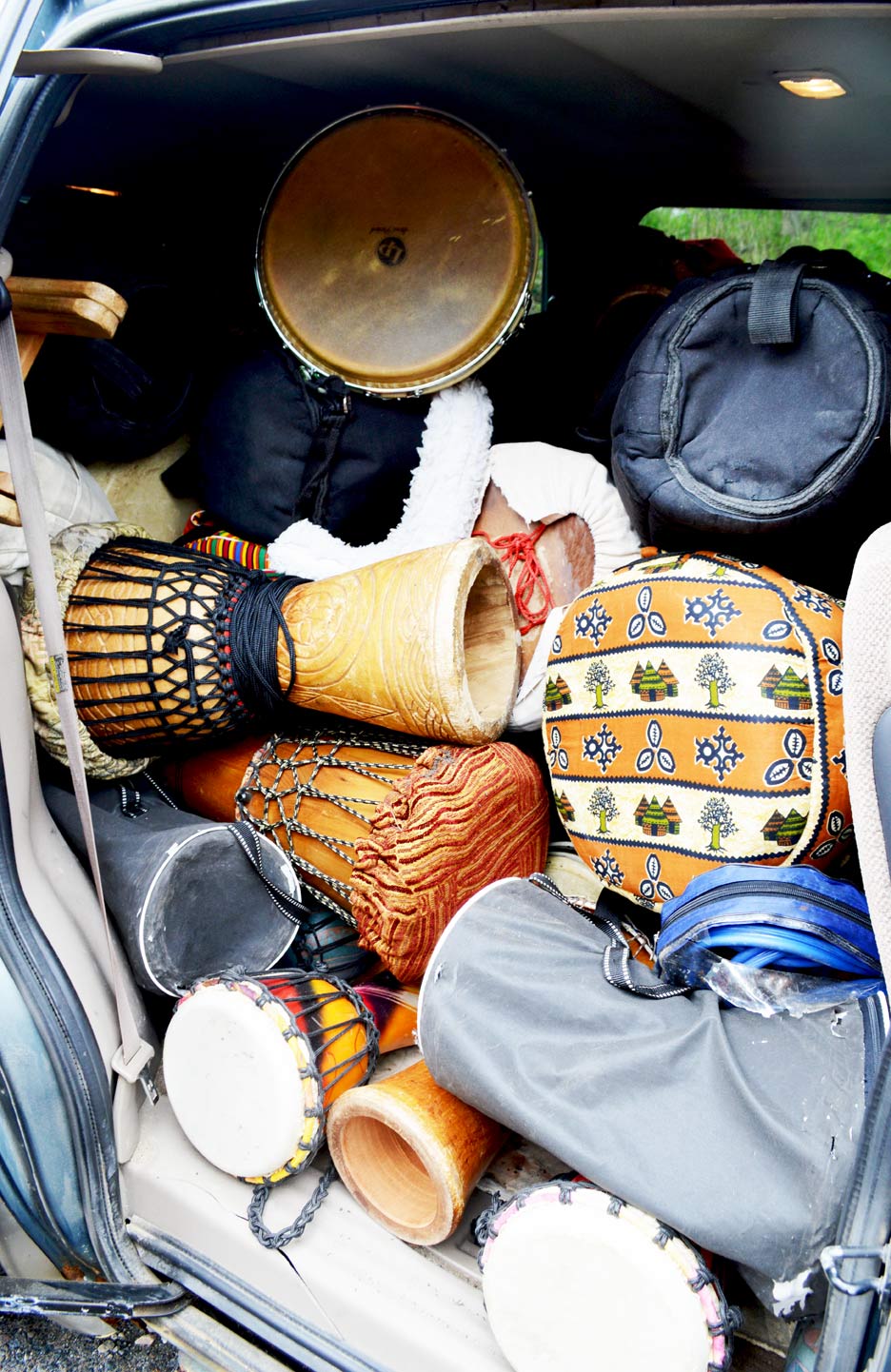 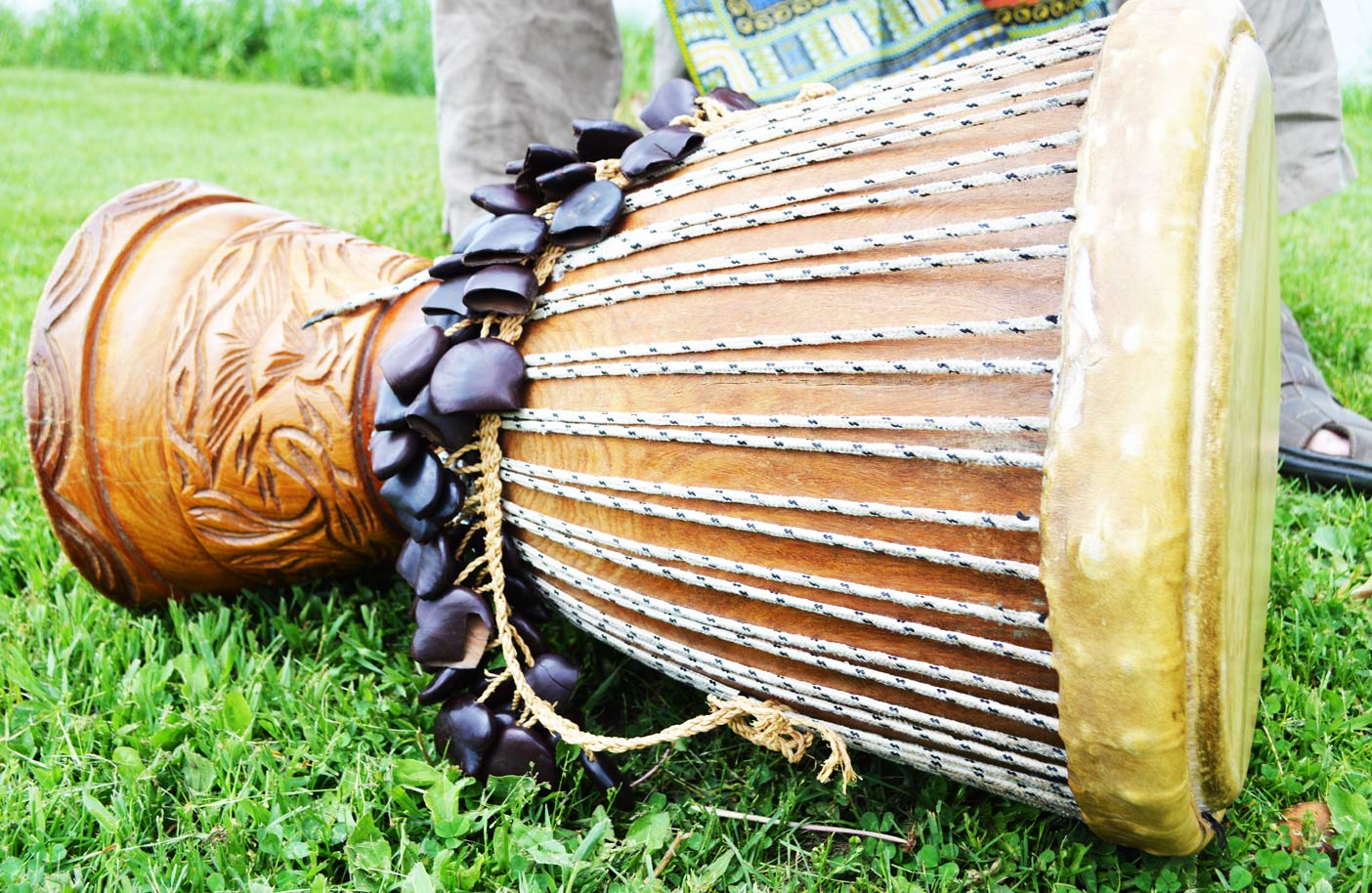 (Clockwise from top left) If you’re part of one of Barry’s drum circles, there will be no judgement if you’re good or bad. Ever. Everyone has rhythm. Barry just wants people to play from the heart. | Barry’s favourite necklace, which is one of many that he wears when he drums. | This is what the inside of his van looks like. There’s a drum for everyone, he says. | His favourite drum has a special story – ask him about it.

“I have discovered the drum circle to be the most accessible, family-friendly experience of in-the-moment, spontaneous music-making I have ever encountered,” he says. “While one does occasionally encounter resistance to participation, I maintain if one has a pulse and is still breathing, those are the only prerequisites to full participation. We all have rhythm. It is everywhere in our natural and manufactured world. It is more a question of openness and awareness and one’s ability to take risks that enable one to experience it more fully.”

Leaving the corporate world behind to pursue his dream of drumming was a step in the right direction for Barry. As was his decision to root himself here. In Muskoka. It’s a magical place, with all its natural beauty. One that is certainly nourishing and inspiring. From the moment he arrived six years ago, he’s felt welcomed, appreciated and encouraged by a community of caring, loving, talented and supportive people.

“It is such an honour and privilege for me to facilitate such a beautiful experience where I constantly witness group and personal transformation, discovery, growth and healing, not to mention some extraordinary music and rhythm,” says Barry.

But his work is not yet done. He shares the same dream as one of his greatest mentors. And that dream is to encourage every single person to bring a drum into their home.

“He [his mentor]believed so much in the power of the drum, and bringing people together and building community… it really resonated with me. One home at a time.”

Barry leads a drum circle every Thursday, at the Active Living Centre from 6:30 to 8 p.m. No experience is necessary and instruments are provided. It’s a family-friendly event for people of all ages to take part in. Admission is $10. For any inquiries, contact Barry at 705-380-2783 or email rhythmicity@hotmail.ca 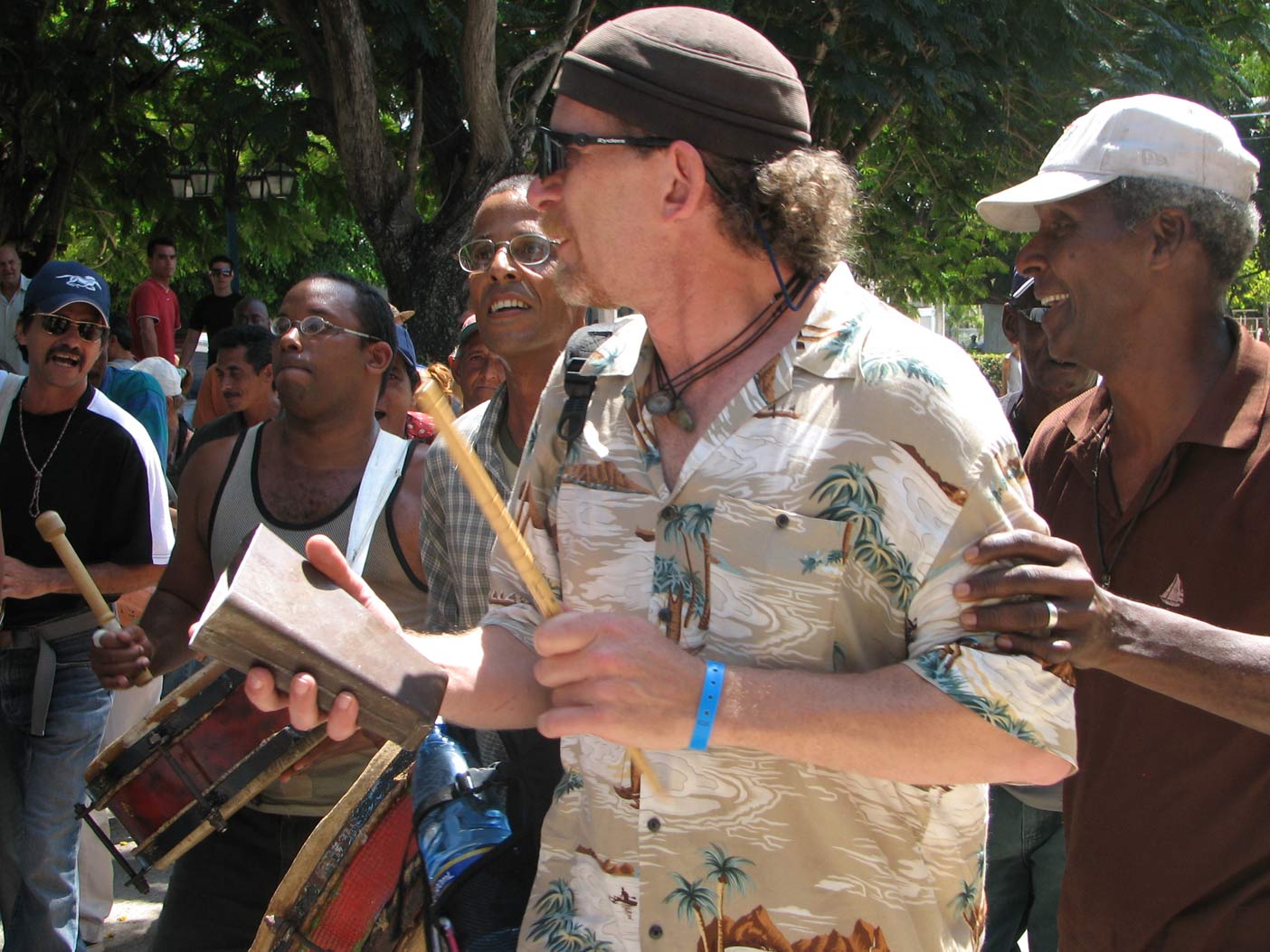 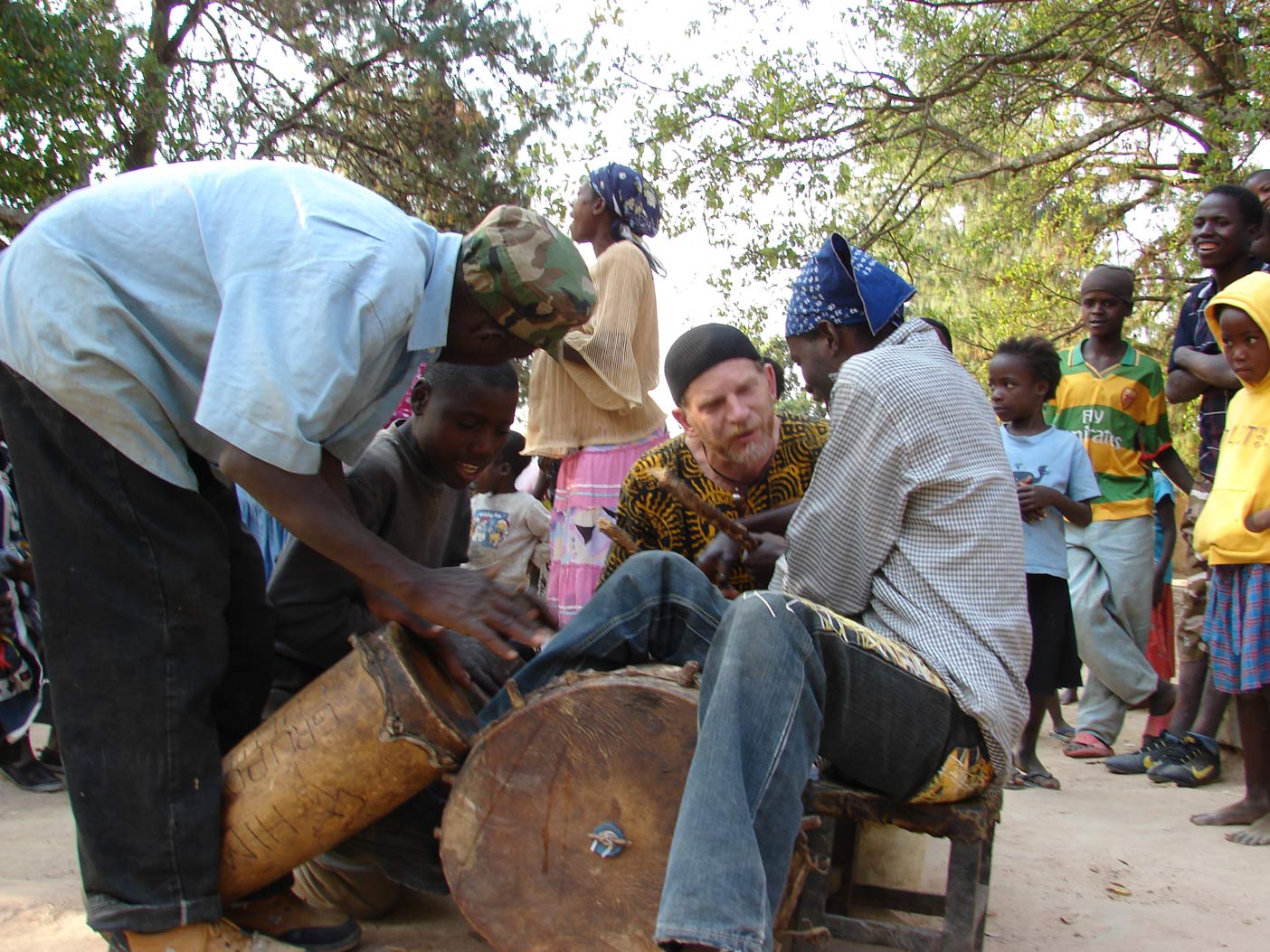 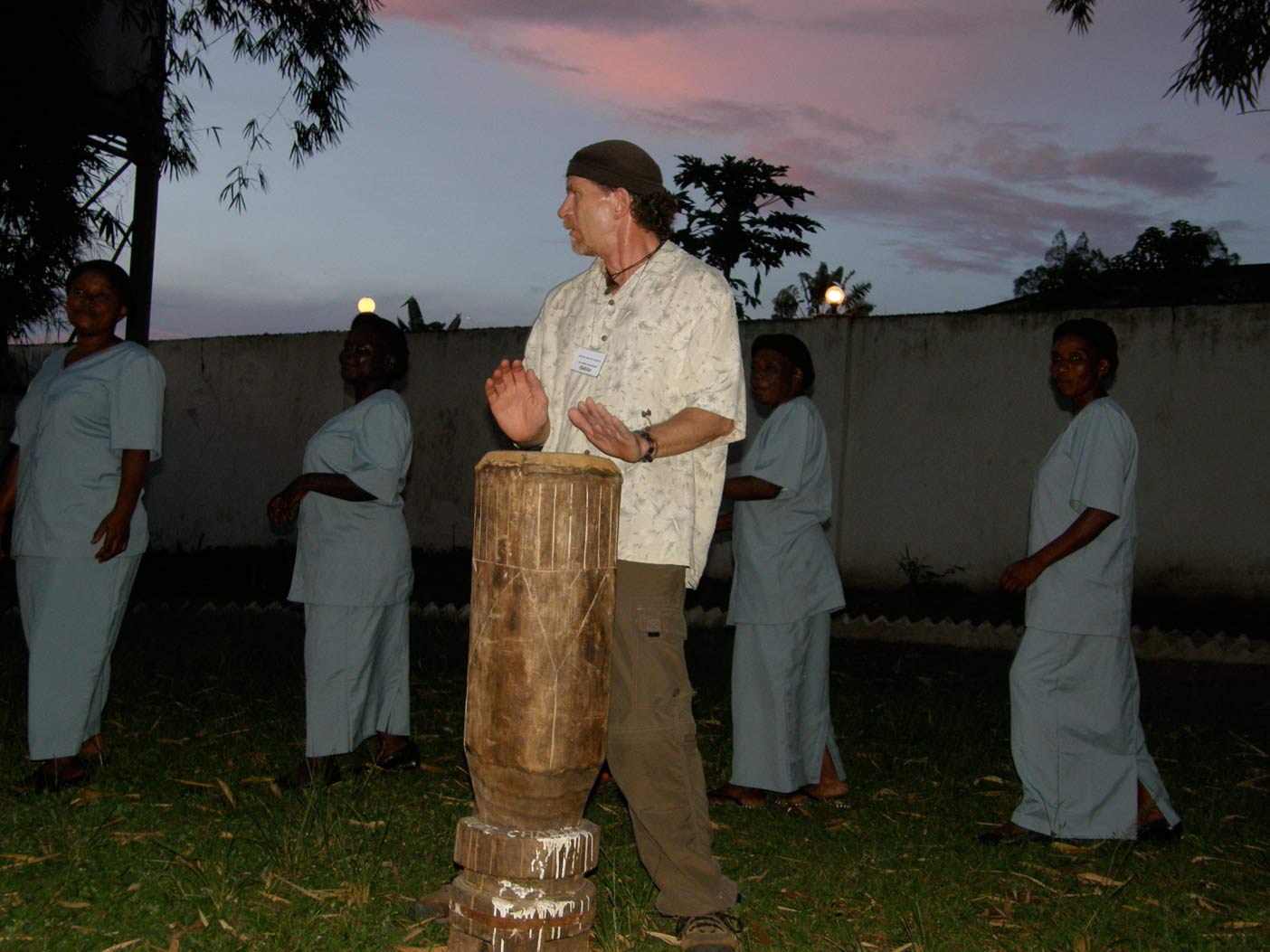 The above photos have been generously supplied by Barry. They are of him involved in some drum circles during his adventure to Africa.