You are here: Home / Community / It’s Wayback Wednesday: How many canoes…?

Every week, we’ll be sharing a vintage photo and asking our readers to chime in with anything you can recall about the photo, other related memories, or even a funny caption.

Have some vintage photos of your own? Send them to [email protected] and we may share them with our readers!

How many canoes can one pickup truck hold? A lot. This vintage photo shows an old Algonquin Outfitters pickup stacked with 15 to 16 canoes (click on the image above to see it full-size). We know the year the photo was taken (can you guess when it was?), but not where. It’s somewhere in Algonquin Park, but the location has even Algonquin Outfitters staff stumped. Help us out if you recognize it!

“So much has changed in Algonquin Park since (then),” says AO’s Marketing Manager, Randy Mitson, who supplied the photo. “This parking lot may not even exist anymore.”

And here are two interesting facts about this photo: these canoes are part of AO’s original fleet of cedar canvas canoes, of which they only have one left still available to rent. And the phone number for AO’s flagship store at Oxtongue Lake, 705-635-2243, remains the same more than 50 years later. (p.s. There’s your hint for the year this photo was taken!)

This photo was originally posted by @nfocalypse on Twitter back on September 4, 2018. 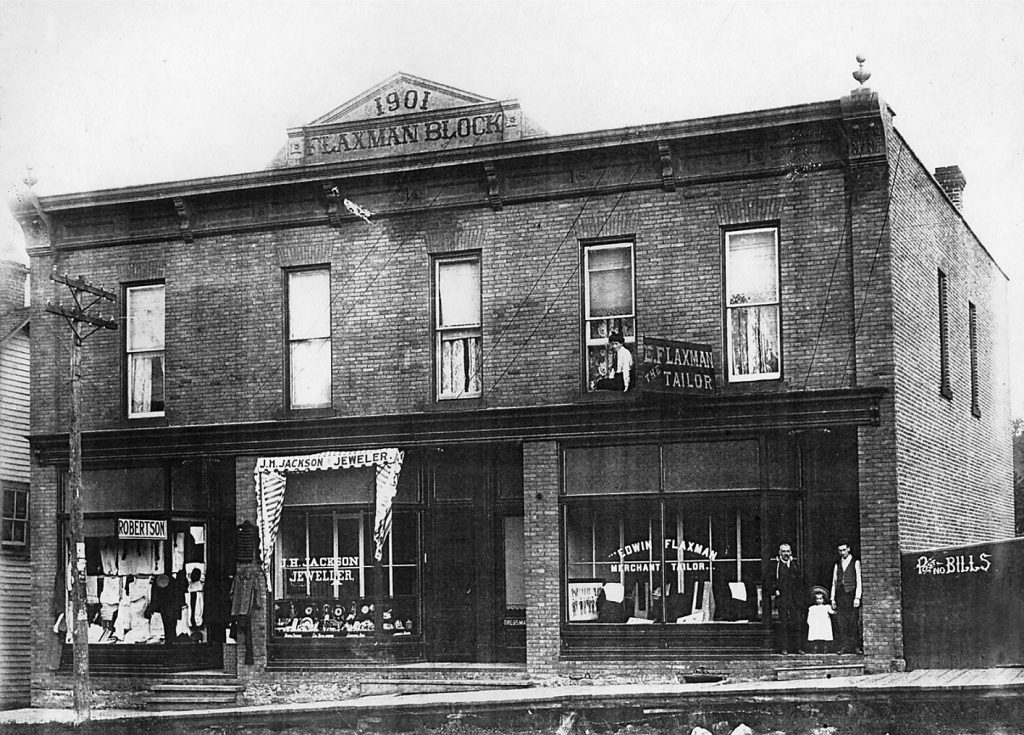 Doppler readers guessed that the Flaxman Block occupied several different locations on Main Street: where Algonquin Outfitters is now, where the Algonquin Theatre is now, next to the old Empire (formerly Dominion) Hotel, where Seven Main Cafe is now, where Eaton’s used to be, where Boston Pizza is today, and where Flotron’s was.

Those who guessed that it was next to the old Empire Hotel (or the Dominion Hotel at the time) are correct.

According to Muskoka Digital Archives, “The Flaxman Block was built in 1901 by a tailor, E. Flaxman, east of the Dominion Hotel, which was on the south side of Main Street at the corner of Centre and Main Streets. The Block was later acquired by William Mayhew and suffered a major fire in 1919.”

Reader Kelly McCaw sent in this neat digitally merged photo to help you visualize this building’s location. The businesses there now are Marigold restaurant and The Record Shoppe. Thanks, Kelly!