When Huntsville and Lake of Bays real estate broker Susan Brown isn’t working with her real estate clients she can often be found at the Aspen Valley Wildlife Sanctuary (AVWS) where she is a volunteer tour guide.

Located just off Aspdin Road, before the Town of Rosseau, the AVWS rescues and rehabilitates injured and orphaned native wildlife. According to Managing Director Howard Smith, last year the Sanctuary took in over 800 animals; everything from mice to moose comes through their door.

The sanctuary aims to provide quality care that avoids habituation. While in captivity the animals are kept in a species-appropriate environment and released into the wild in a condition that gives them the best possible chance for survival. The sanctuary also provides a permanent home for native species unable to survive in the wild due to human interference or the extent of their injury.

While the public cannot view rehabilitating animals as human contact is minimized to avoid habituation, AVWS does have permanent residents (permanent because they have habituated to humans or have physical issues that prevent them from being released) that the public may see while on an informative, guided tour given by sanctuary volunteers.

It was while on one such tour with her niece that Susan became inspired to become a volunteer. “I was curious,” Susan says. “I hadn’t been to the Aspen Valley Wildlife Sanctuary since the late ’70s when Audrey (Tournay, the founder) was running it. My niece and I came out on a tour. She is studying to be a vet and I was hoping it would influence her a bit to get more into wildlife care. I was so impressed I thought volunteer work at the sanctuary might be something I would like.”

And so it came to be that Susan takes groups on a tour through some of the 460 acres of species-appropriate natural enclosures. While on tour she educates her group about the work being done at the AVWS and tells the stories of the permanent wildlife residents.

Susan says volunteering at the sanctuary has taught her a lot about nature and about herself. “It’s so peaceful out there,” she says. “I feel that it has such a good energy. It brings me very close to nature and it brings my own life into balance. We get so busy and it gets so hectic. This brings it back into focus and I think that is really important.”

The tours are important to AVWS as well. With an operating budget of $300,000 and no government funding, the sanctuary depends on the revenue and donations that result from the tours. Tours are by appointment. Start times for tours are generally 9:30 a.m. and 11:00 a.m. and last approximately an hour and a half. The cost is a minimum donation of $15 per person.

The people on a recent tour with Susan were lucky to hear this vocal display from Tippy the coyote:

“I really enjoy the tours,” Susan says. “Feeling that I can help is very rewarding. I like interacting with the people here. They are such good, genuine, really good people.”

Meet Mama Bear, one of the permanent residents at AVWS 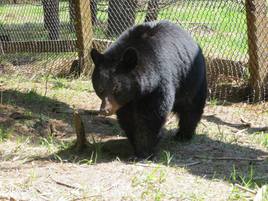 Mama Bear was used to train dogs how to attack bears in a process called “bear baiting”.

Her previous owners had her front claws and eyeteeth removed so she was unable to defend herself. The dogs were thrown on top of Mama frequently causing all her fur to be torn off; this left punctures and gashes from the attacks. Luckily the authorities were called and Mama Bear was removed from such cruel treatment. In the 1990s there were fewer laws protecting animals from cruelty and the hunter was given a small fine. But Mama Bear was scarred for life.

Her coat has grown back, beautiful in the summer sun, but her claws and important teeth will never return. Without them she cannot survive in the wild, unable to dig a den, unable to find certain foods, unable to climb trees in case of danger. She has become a permanent resident at AVWS since then. Mama has a five-acre enclosure boasting her own swimming pool, warm grassy meadows and cool shady forests. Most of her food sources are in the enclosure but Mama Bear’s two favorite things are the peanuts and dandelion leaves provided to her.

In addition to caring for the animals, there is always work to do at AVWS. “Right now we are in a bit of a crunch trying to build,” Smith said. “A lot of the old wood enclosures are falling down because they were made with untreated posts and they are rotting at the ground. We are going to rebuild with steel as our standard, but it’s pretty expensive. We were lucky a couple of years ago. Fowler Construction donated most of the security fence that was around the G8 to us so we have been lucky to have that material to do a lot of our rebuilding. But we still need more chain link and that sort of thing.”

The sanctuary always has a wish list from which people can get ideas for donations. And, of course, cash donations are always welcome.

If you would like to book a tour, volunteer, make a donation, or learn more about the Aspen Valley Wildlife Sanctuary, visit aspenvalley.ca.