It’s the highest daily case count reported by the health unit since the pandemic started, according to SMDHU medical officer of health, Dr. Charles Gardner.

Of the 23 other new cases in Simcoe Muskoka, the majority are in the Barrie and New Tecumseth areas, with nine of the cases related to a workplace outbreak at a farm in Simcoe County. Eleven of the overall cases were asymptomatic, and found as a result of required testing for a workplace or for visiting a long-term care facility. 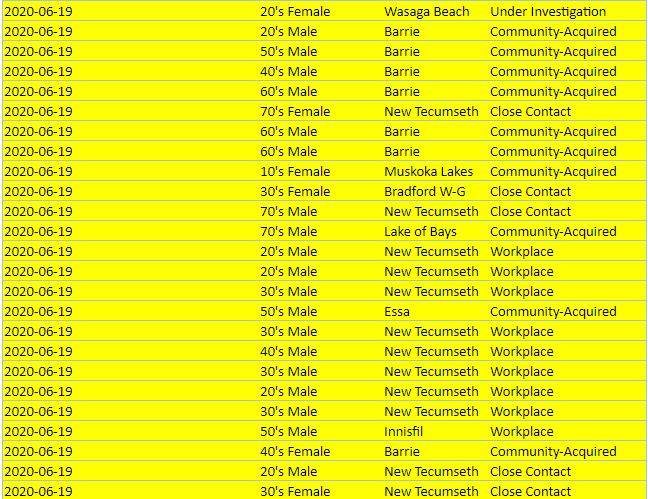 These latest cases bring the total number of laboratory-confirmed cases in Simcoe Muskoka to 553—530 in Simcoe County and 23 in Muskoka.

The increase in case counts comes just a week after most of Ontario entered Stage 2 of the Province’s reopening plan, but Dr. Gardner said it’s too early to know if there’s a potential correlation.

“It would seem to me that if you take into account date of onset [of symptoms and]  incubation period, that it would be a bit soon to attribute this to changing into Stage 2 and opening up the economy from Stage 1,” he said, adding that the move to Stage 2 has complicated the health unit’s investigations. “We’ve seen individuals who’ve tested positive to have more contacts and more social environments outdoors than was the case before we moved into Stage 2.”

Dr. Gardner said that the increase is not sufficient grounds for the health unit to advise scaling back Stage 2 reopening, but that people do need to be aware of the ongoing potential for transmission of the virus. “We have to keep [control measures]happening. Employers have to promote that, business owners need to promote that in their businesses. So I think this is a reminder to people of the importance of this, that transmission is still happening. We can still get spikes like this, and if we’re not careful we could get large a setback that would be sustained and really call into question where we go from here.”

There has been an increase in testing of late, with a three- or four-fold increase when Premier Doug Ford announced a few weeks ago that asymptomatic people could be tested, as well as an increase since the Province implemented requirements for testing for all workers in long-term care facilities every two weeks and all visitors to long-term care facilities and retirement homes, Dr. Gardner noted.

As of this morning, the health unit had received 2,500 test results, a large single-day jump. Last week, there were about 6,000 tests completed in Simcoe Muskoka. According to a representative for the Muskoka Assessment Centres, they have swabbed about 1,900 people at the two sites in Huntsville and Bracebridge since opening in early April. They currently average 80 tests per day between the two sites.

“Another indicator for how much testing is happening is something we call the per cent positivity—a percentage of all the tests that are done coming back positive,” said Dr. Gardner. “The smaller that number is, the greater the saturation of tests, the more testing is happening. Typically we’ve been in the range of two to three per cent. In the past week we’ve been down to 0.7 per cent and Ontario has been at 0.8 per cent. We find that there’s a lot of testing happening in order to get that kind of low per cent positivity result.”

He also said that the large number of new cases that were asymptomatic due to requirements to be tested related to work or related to visiting long-term care or retirement facilities “was of note to me. It tells me something about the fact that we might expect more of such positive test results as a result of that kind of thing, that this asymptomatic testing seems to be bringing to the surface some cases that we wouldn’t have known otherwise.”

Asymptomatic testing does increase the possibility of false positives, particularly in areas where there are low incidence rates of a virus, but Dr. Gardner said that the health unit treats all positive test results as true positives because it’s the safest approach.

“…if you apply a very accurate test to a population in which the likelihood in that population is very low, the overall incidence of the virus is very low, any test that you get that’s positive has a significant likelihood that it’s a false positive,” he said. “You’re never able to clearly determine at the end of the day whether or not somebody had a false positive, or whether in fact they had a true positive and it was near the end of their infection and they were clearing it and [when]  we follow up later and test them, they are negative. We’re left with those two possibilities and we can never really sort them out. In theory, there will be some false positives. In practice when you look at individual cases you can never really know for sure.”

Yesterday, the provincial government announced enhanced case and contact tracing that includes a new app to be released in July. Dr. Gardner said that the value of the app will be in helping to identify contacts that cases either didn’t think of or weren’t aware of.