You are here: Home / Feature / The ties that bind: Meet Evelyn Coker

Every two weeks, I will be profiling an extraordinary human being who lives in our community. If you know someone who is doing something interesting with their life, I want to hear about it. Send me an email at laura.maclean@doppleronline.ca

You never forget your first.

Evelyn Coker remembers many of them. Her first kiss. The first time she tasted an olive. The feeling of accomplishment when she received her Level 1 in Reiki. And her heart overflows with joy when she thinks about that fateful day back in 2011 when she joined a couple in loving matrimony for the first time.

Her collection of significant moments have become the ingredients for a life well-lived. She gives off an energy that can leave you feeling charged up just by being in her presence. She’s a kindred spirit who loves to dance and smile and has the kind of self-awareness that comes with being totally tuned in.

“I’m a seeker,” proclaims the 58-year-old. She adds, in a matter-of-fact tone, that she’s always been that way. Even as a young girl.

Evelyn is motivated to go after whatever calls to her. And that works to her advantage. She’s a beautiful blend of many things. Interesting things, too. She’s a Reiki Master who’s been practicing for the last 20 years and she’s also a certified doula. She’s a mother of four who declares her kids had the best childhood ever because she made that her every day mission. Her husband, Tom, is her other half. They’ve been married for 28 years but have more than three decades of togetherness. The sparkle between them is still shining as bright as the day they exchanged vows. And Evelyn knows a lot about how important those vows can be.

“It can be so much more than a piece of paper,” she says. “But for some the paper means nothing.”

And she would know. She’s also happens to be a wedding officiant. With that comes the ability to be able to lead celebration of life events, funerals, gravesite interments and baby naming ceremonies. Evelyn is passionate about the role she plays in “joining two hearts as they go forward together in their loving journey”. It was something she decided to pursue back in 2010 simply because she thought she’d be good at it. She was right. And it’s probably because she’s naturally a caring person. Her latest feat was getting certified in wedding planning. She’s not quite sure if she will delve right into organizing someone’s big, special day. But she could if she wanted to. It’s another thing she’s got under her belt.

No matter the setting, when I see the love and joy between two people it makes every fibre of my being love what I do.

Since she took a leap of faith and became a wedding officiant, she’s married 200 couples and boasts that not a single one has ever been the same as another. She gushes about how much it fulfills her on a soul level and she beams with pride when she relays some of the magical days she’s got to be a part of. Whether it’s a symbolic wedding or a couple taking their legal vows, Evelyn will join two loving hearts with or without the paperwork. She’s married people as young as 18 and as old as 83. Love is love, she says. It’s such a beautiful thing.

I’ve done a hand-fast ceremony, a Star Wars wedding, a zombie wedding and a motorbike wedding where the couple had their Harley Davidson motorcycles nose to nose. I’ve done a camo-themed wedding where the bride had camo on her wedding dress, the groom and groomsmen were wearing camo and the flower girl threw down shell casings. I’ve done weddings in front of the kitchen sink with two witnesses to a couple with 300 guests and one wasn’t more joyous than the other.

Last year she did five weddings in a day and it’s a wonder how she even managed to fit them all in. The best part: it was on her own wedding anniversary and the way people kept calling her to book at different times was “like serendipity.” The times and locations being requested all seemed to work, with Evelyn actually officiating her last wedding on her way home. 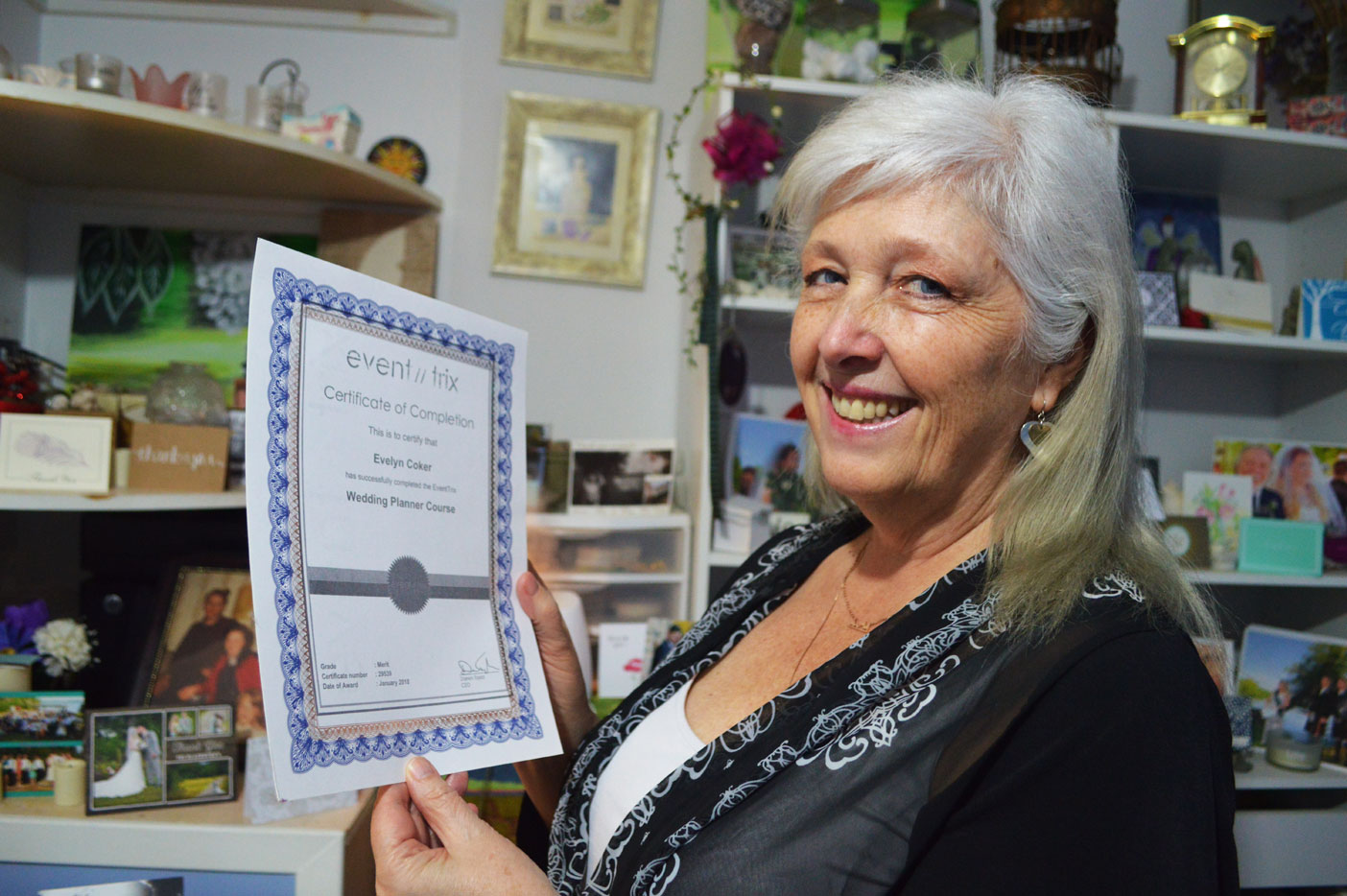 Evelyn recently got certified in wedding planning, although she’s not entirely sure if she will put it to use right now. She doesn’t shy away from challenge. 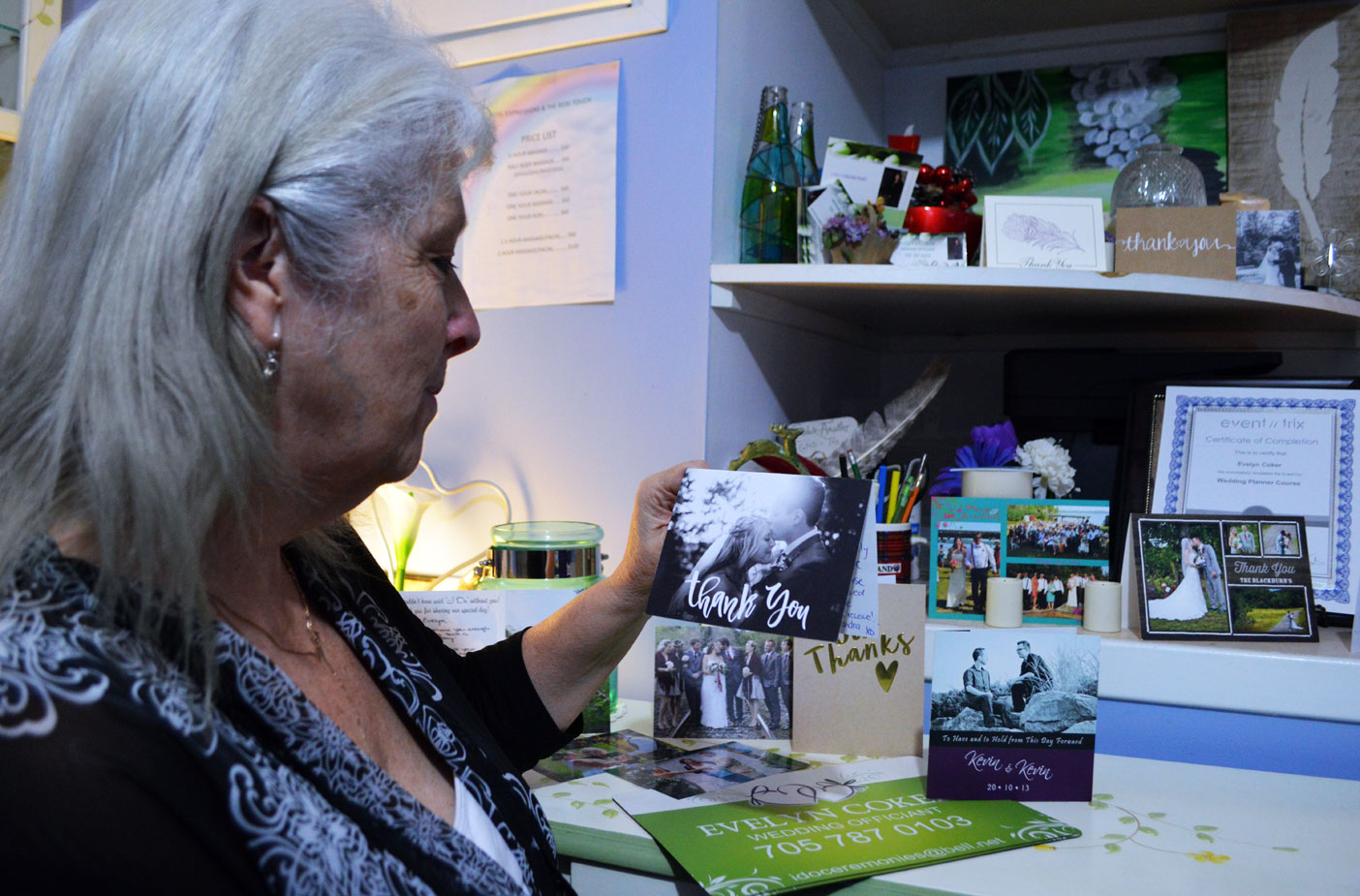 Her home office is filled with thank you cards and thoughtful gifts from those who have somehow been touched by her. She treasures anything personal she’s been given. 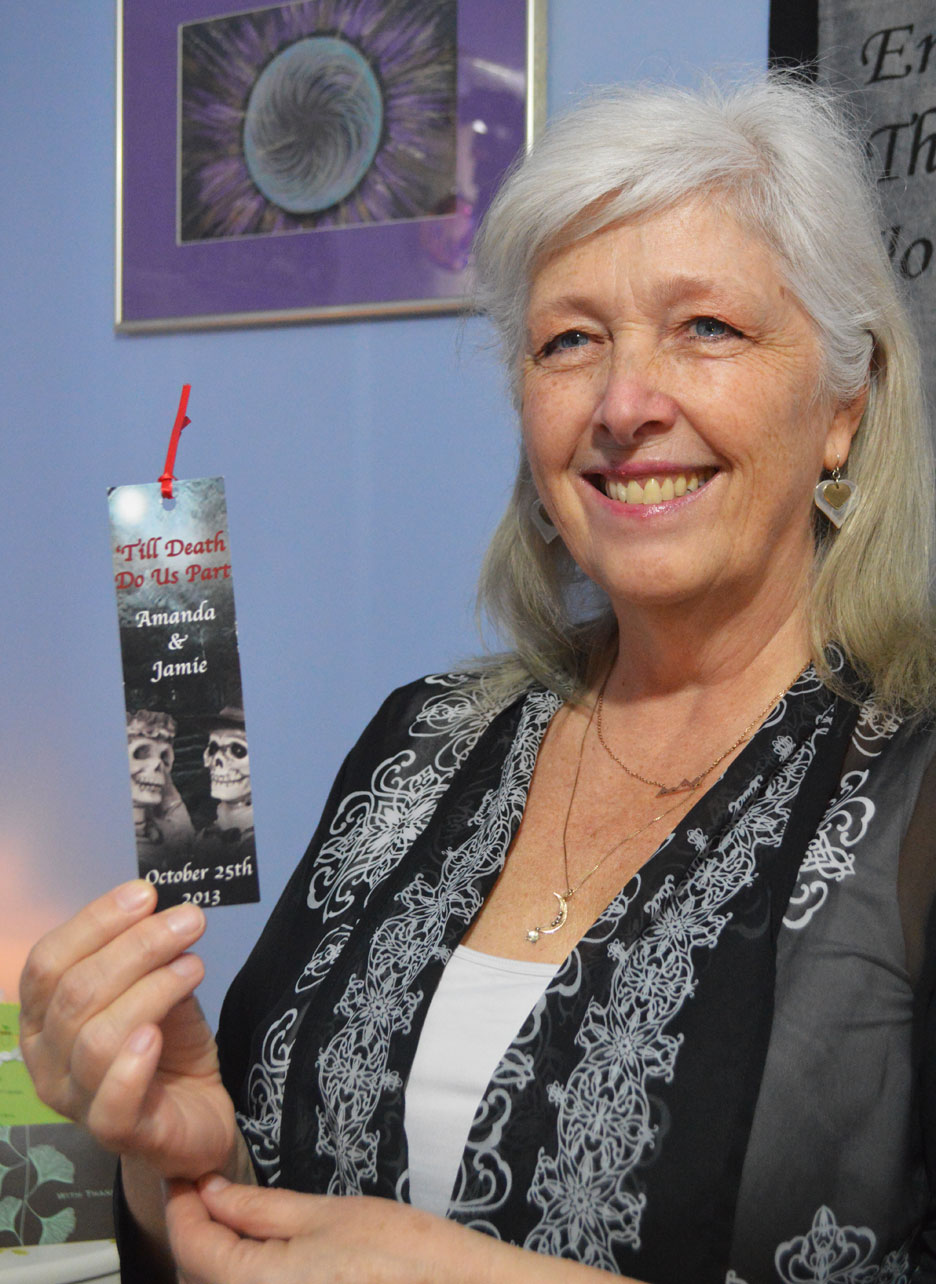 Officiating a zombie wedding was a highlight of last year and an event Evelyn will never forget.

She reflects on how far she’s really come on her journey. In her first year she did 12 weddings, 26 the next, then 36 and last year she did 40. So far she has 31 booked for this year and a few already scheduled for next year. Adding to her level of uniqueness is the fact that she has given brides Reiki to calm them down before walking down the aisle and she’s even worked her magic on a few grooms as well.

Make your wedding about you, that’s the best thing I can advise. And be in the moment. Don’t care what else is going on around you because that makes for a great wedding story.

All in all it seems pretty evident that Evelyn was put on this earth to help people. In some way or another. She’s doing exactly what she’s meant to do. Whether she’s part of a symbolic ceremony or helping a couple make it official with legal vows or perhaps she’s asking for permission to give a stressed out bride some healing energy, each and every time Evelyn is making a big commitment, too.

“If I don’t give a thousand percent, what good is that to the person I’m trying to help?”