Courtney Coker gets choked up when she talks about how much her mom, Evelyn, means to her.

She just returned home after living out west in Canmore, Alberta for three years. She wasn’t home for more than a few days before she delved right into a passion she shares with her mom. She’s practicing Reiki, a form of energy therapy of healing with the hands. And the best part: she’s applying everything her mom has taught her.

Courtney is currently doing Reiki treatments in a space she shares with her mom in the Coker family home (where she grew up with her three other siblings) out Aspdin Road. Trust me, the room is filled with a beautiful energy. There’s something special going on in there for sure. She is hoping to be trained as a Reiki master at the beginning of next month. Of course, it will be her mom who trains her. Becoming a Reiki master means a lot to Courtney. One day, she’ll be able to teach others. She has a lot to look forward to. 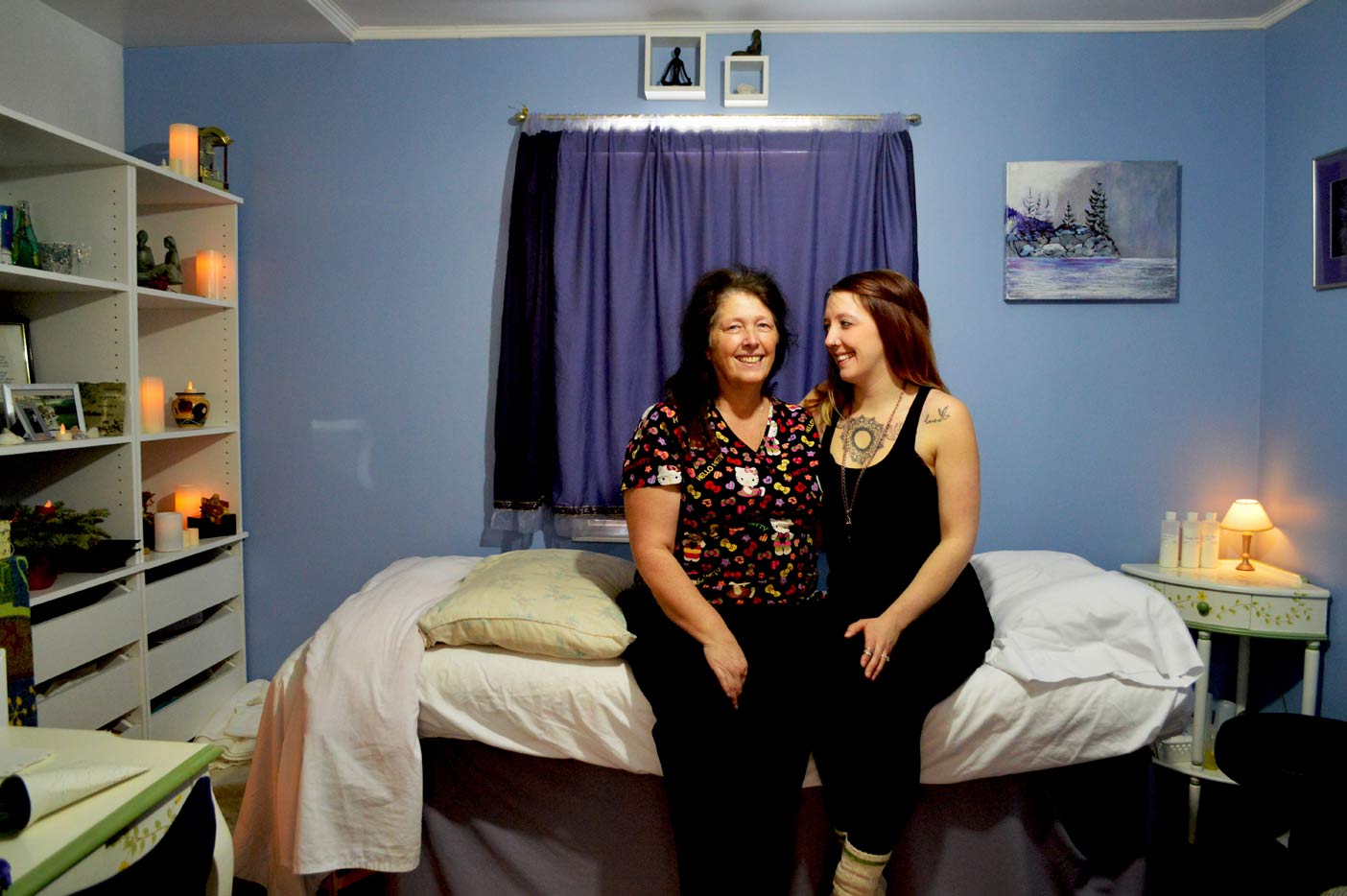 Courtney’s mom, Evelyn, has taught her daughter everything she knows about Reiki.

She tells me about how she’s always been a momma’s girl. She can’t live without her. If you ask Evelyn, she’ll say the same thing. Watching her daughter follow her footsteps definitely makes her proud. She got teary when I did a photo shoot of the two of them. Indeed, they share an unbreakable bond.

Courtney’s always been a dreamer, a person who was up for anything and wanted to see the world. But for the first time in her life, she feels like she’s ready to settle down. She has a fiancé and a daughter now. She wants to plant some roots.

“It’s so hard to describe how lucky I feel,” says the 28-year-old.  “Not only do I get to do what makes me most happy, but I get to do it with my mom. She’s my business partner. We always joked and fantasized about doing something together. It’s a little overwhelming. I can’t help but feel very blessed every single day.”

Courtney’s life has been one enriched by spirituality. Having a mother who was spiritual in her beliefs has played a huge role in shaping who Courtney is today. Even as a teenager with anxiety issues, the holistic approach to combatting it was always encouraged. She took yoga and learned to meditate. When she was 17, she received her Level 1 Reiki attunement from her mom, who has been practicing for close to two decades. Reiki is taught in levels and the first teaches you how to channel healing energy on yourself, and that can also be passed onto loved ones and even animals.

“I didn’t abandon it, you always have it, but I just wasn’t doing much with it,” Courtney says. “Three years later, my mom was doing another Level 1 course and I did it a second time. Then I kept asking my mom for Level 2 but she’s not the kind of practitioner to do it for people to make a buck or anything like that. She wants you to be ready. She knew I wasn’t. It was a long time before I got my Level 2.”

Courtney went off to college in Toronto, where she studied massage therapy. The first year of school was intense, focusing on subjects like the human anatomy and physiology.

“I think after exams were finished I felt a serious need to reconnect with my spiritual side and sort of ground myself again.”

She realized her heart simply wasn’t into what she was studying. She dropped out and that’s when she knew she was ready to receive her Level 2.

Her mom agreed. Level 2, which Evelyn teaches over the span of three days, gives you the ability to practice on other people. For Courtney, it meant she was one step closer to getting the chance to do something she loved and sharing that with her mother.

It’s really an exciting feeling where I am right now. Making people feel good is what brings me joy.

Because Evelyn made such an effort to have her daughter involved in Reiki experiences, Courtney was lucky enough to be part of circle healings where a group of ladies practiced on each other. Experiences vary, depending on who is involved in the circles. Some Reiki practitioners claim to see colours or see flashes of light or even faces when they are channeling healing energy. For others, like Courtney, it’s more of a feeling.

“This one time, we all got into our bathing suits to practice in the water,” recalls Courtney. “I had this out-of-body experience surrounded by all these beautiful woman. It’s hard to describe what happened, but it was incredible. My body was shaking uncontrollably. I felt amazing. I felt their energy surrounding me and loving me. That’s happened many times since then. But that was the first time I thought, ‘Wow. There’s something to this.’ I’ll never ever forget that.”

Everything happens for a reason. And Courtney moving out west for three years might have something to do with her finding herself. She says she truly blossomed living there and that there’s something magical about being surrounded by mountains. She connected with so many different people from all walks of life. She took part in Reiki shares and meditation groups. She worked with crystals and learned new things from some of the inspiring people she met. When she came home, she felt rejuvenated. She was ready to stop being a bartender and shift her focus to something more meaningful.

“It’s almost indescribable. There’s something about the mountains and seeing the world’s amazingness. It keeps you humble and grounded… it keeps you focused on what’s important.”

She’s a small town girl with big dreams and hopes to one day incorporate Reiki training, massage and yoga all into one. Right now, she’s just happy to be back in her hometown, the one place in the world where she can count on support.

“For me, there’s a sense of community coming home and having people I’ve known my whole life support me. It’s definitely something special.”

This week’s extraordinary person profile was definitely bittersweet for me to write. The bond that Courtney and Evelyn share reminds me of the one I had with my own mom before she passed away. Actually, Evelyn and my mom practiced Reiki together for years. It seemed like such an unusual coincidence that I interviewed Courtney on my mom’s birthday this past Sunday, considering the topic of our conversation. My mom always wanted to teach me. I just never made the time. Now that it’s too late, I’d give anything to have another chance. It’s true. Hindsight is 20/20. I’m glad Courtney made the effort to follow in her mother’s footsteps.