You are here: Home / Commentary / The Energy big picture, by Dave Wilkin and Tim Lutton

A mini-series on the future of energy
By Dave Wilkin, P. Eng., M.Eng. and Tim Lutton, BSc., MBA

In this second article in our series, we layout the energy big picture. Energy firm British Petroleum (BP) has one of the most comprehensive, widely available and referenced energy data sets publicly available. It’s reasonably consistent with Exxon-Mobil’s, International Energy Agency’s and US EIA’s data, so we based most of our analysis on BP’s data. 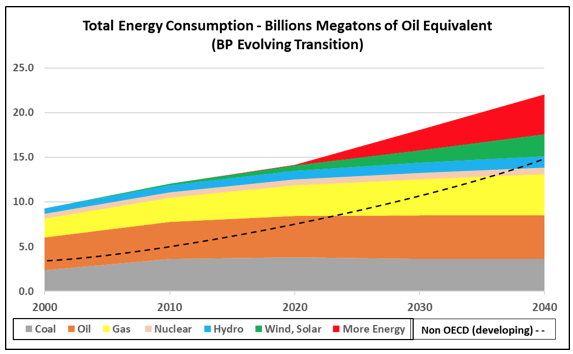 Next, the table shows oil and gas reserves and their expected lifespans for consumption (R/C) where exports/imports are excluded. It is important to know the three types of carbon-energy reserve classifications, based on commercial extraction success probability and utilizing known technologies: proven (>90%); probable (50%); and possible (<10%). 3P reserves includes all three types, whereas 2P is  proved and probable only. It’s complex and engineering measurements vary, particularly in non-transparent countries. BP forecasts are mostly 2P reserve based.  Rystad (an independent energy research firm) forecasts here are 3P reserves, and include much more shale/tight oil and oil-sands formations reserves (reserves to production ratio shown). It’s also important to know that new discoveries have added to reserves (about 1%/year to global 2P reserves since 2010) but they have slowed significantly in the last few years. With over 150 years of global coal reserves, we excluded it, and renewable biofuels share remains too insignificant to breakout. 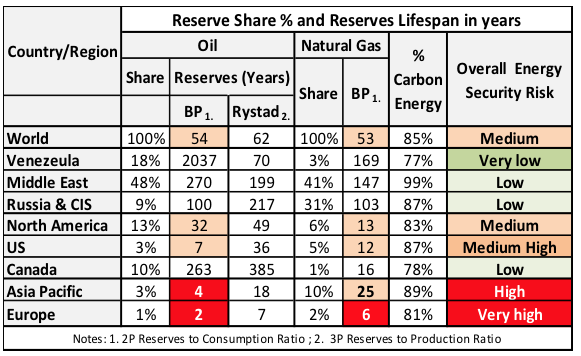 Here are the key messages to take away from this big picture:

When reserves begin declining, exploration in more challenging and environmentally sensitive areas such as the Arctic or deep-ocean will grow, resulting in much higher energy costs, and significantly increased environmental risks. It will also likely spark an increase in much cheaper coal consumption. Canadian government energy policy seems completely blind to these realities.

This nicely sets up our next article, understanding the dynamics of growth. Watch for it!

Dave Wilkin is a Professional Engineer who lives in Huntsville. He is an electrical engineer with a career spanning 35 years in IT, banking and consulting.
Tim Lutton worked in the natural gas and LNG industry for 32 years; with Imperial Oil in Canada, and ExxonMobil in the USA, Australia and Qatar and now lives in Huntsville.