You are here: Home / Commentary / The dangers of political extremism | Commentary

Politics is defined as the art and science of governing the total complex of relations between people. It is easy and even fashionable to be cynical about politics, but nothing is more important.

Since world politics seems to be taking a swing to the right, I thought it would be worth some reading to improve my understanding of the political spectrum and how it continues to evolve. Here is what I found.

The political terms “left” and “right” were first used during the French Revolution (1789-1799) and referred to the seating arrangements in the French parliament. Those who sat to the right of the parliamentary president were supportive of hereditary monarchist hierarchy, tradition, and clericalism. Those who sat to the left were supportive of increasing democracy and equality. The term “extreme right” has been applied to Facism, Nazism, and racial supremacy.

We tend to have short memories of history, so it is helpful to review some important events resulting from the ongoing competition between left and right ideologies that are still shaping politics today.

Up to 1500 – Feudalism was the dominant social system in much of the world. The nobility held lands from the crown in exchange for military service, and vassals were tenants of the nobles.

1789-1799 – The French Revolution overthrew the monarchy, established a republic, but ended with a dictatorship under Napoleon. Napoleon tacked to the right, reversed many of the democratic gains but did not restore the ancient regime.

1914-1918 – WWI was triggered when Serbian extremists assassinated the Austrian monarch during an attempt to “liberate” Slavic peoples living in Austria – 10 million deaths.

1917 – Marxism and communism took hold in Russia. The Czars family was executed in 1918.

1920 – The League of Nations was initiated by US President Woodrow Wilson to promote world peace.

1918-1920 – Communism was imported into North Korea from Russia and China.

1939-1945 – WWII – At the end of WWI the Treaty of Versailles imposed crippling sanctions on Germany that fuelled support for Hitler’s extreme-right Nazi Party – 50 million deaths.

1945 – League of Nations was replaced by a larger and more inclusive United Nations to prevent war.

1948 – US Secretary of State Marshall initiated the Marshall Plan to help rebuild Europe after WWII.

1948 – UN formed the World Health Organization “to assure attainment by all peoples of the highest possible level of health.”

1953 – British MI6 and the US CIA organized a coup to topple Iran’s first democratically elected government. That led to an autocracy, the 1979 Iranian Revolution, and 70 years of Middle East turmoil.

1976–2020 – After Mao, new Chinese leaders travelled to observe successful Western and Asian economies. They led a transition to a hybrid system with a mainly free-market economy to create wealth, but a one-party socialist system to distribute wealth.  Extreme poverty went from 88 per cent to one per cent.

1980 – Meanwhile, a small group of US plutocrats began a campaign to move America to the right to protect their mostly inherited fortunes. They worked to weaken election campaign funding laws, then changed tax codes to enhance shareholder profits by outsourcing manufacturing to low-wage countries. The plutocrats multiplied their wealth while workers lost their jobs and employer-paid health insurance. The result was growing inequality, thousands of vacant factories and shopping malls, and social unrest.

1993 – the EU (European Union) was formed to ensure a more stable and more prosperous Europe.

1999 – Extreme-leftists moved Venezuela from prosperity to 87 per cent below the poverty line by 2019.

2015 – Obama entered an agreement with the UK, France, Germany, Russia, and China to end Iran’s development of nuclear weapons. The agreement was also a start toward normalizing relations between Iran’s 83 million people and the West that went offside with the coup organized by MI6 and CIA in 1953.

2016 – President Trump was elected. Before he knew where the door was, he began to fulfill ill-advised campaign promises by targeting Mexico, Canada, and the European Union along with Iran and China.

2018 – With no evidence of violation, Trump withdrew from the Iran nuclear agreement and imposed more crippling sanctions which undermined Iran’s moderates and strengthened its hardliners. So far, the aftermath has included ongoing attacks and counterattacks around the Middle East, the assassination of an Iranian General, and the shooting down of a Ukranian airliner killing 168 civilians.

2020 – In its first eight months, the COVID-19 pandemic infected 25 million people worldwide; 844,000 people died. The hard-right Trump administration continued to favour the ultra-rich at the expense of everyone else. Trump politicized the pandemic and prioritized the economy over public health. To date, the US experienced the worst of both, with six million infections and 186,000 deaths; 30 million Americans lost their jobs (and their employer-paid health care) while America’s billionaires saw their stock-market wealth increase by $400 billion. And social unrest increased dramatically.

Politics is like physics. An action in one direction triggers a reaction in the opposite direction. Five hundred years of history shows that both extreme-left and extreme-right politics generally create problems rather than solving them. The problem with both extreme-right and extreme-left regimes is that they always end up in the same place: they become corrupt autocracies clinging to power out of fear of reprisals.

The belief in equal opportunity took root during the 1789 French Revolution in a world of less than a billion people. Equality is much more important in today’s world approaching eight billion people. With instant communications provided by satellite TV and the Internet, everyone knows how everyone else is living. There will always be people who need more help than others and full equality will never be achieved, but conspicuous, gross inequality is increasingly obvious and unacceptable.

To assist countries in measuring their progress, the United Nations conducts annual surveys of a representative sample of people in over 150 member countries on factors affecting their lives. The UN Human Development Survey compares countries on education, a decent standard of living, and a long and healthy life. The UN World Happiness Survey compares countries on economics (GDP per capita), social support, life expectancy, freedom to make life choices, generosity, and perception of corruption.  As shown below, 17 countries rank among the top 20 on both surveys. 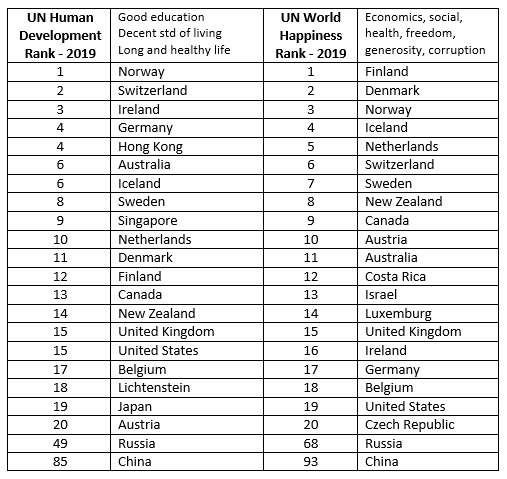 The UN surveys indicate that the most stable, happy, and healthy countries tend to be those with well-balanced moderate-right or moderate-left domestic politics.

And only moderate politics can foster the international collaboration essential to solving the world’s most critical problems: climate change, pandemics, population growth, poverty, conflict, and mass-migration. We must support the best moderate-right or moderate-left politics, at home and abroad.