You are here: Home / Entertainment / Sound and Sight: Sean Cotton

Sean Cotton has been wowing Muskoka audiences through venues large and small—pubs, theatres, and radio stages—since he chose to live in the region with his family.

A consummate professional, an exquisite guitarist, arranger, musical director, composer, and powerful, versatile singer, Cotton has written songs and musical productions for an astonishing array of presentations throughout his career such as the Huntsville Rock Choir, “The Tao of Paddling”, When Winnie Knew, and The Last Waltz tribute, to name just a few.

Sean Cotton began his professional life in 1990 when he decided that, rather than go off to university, he would devote his life to being a musician. Initially Cotton worked for years with an Indie band called Shadows of Laughter, a power trio of moody art rock. They disbanded when the challenges of sustaining a successful act were dashed by a blizzard that prevented them from opening for the Headstones.

During this period Cotton began a formidable partnership with Corin Raymond—together they later became known as The Undesirables, an unusual name choice given the success they were to experience. Over a six-year period, the duo performed throughout Ontario’s club circuit, building a devoted following. But as the club circuit began to change, the band faltered. Cotton entered the next chapter in his development by enrolling in Humber College’s jazz studies program, where he expanded his musicianship, especially in regards to electric guitar.

While the duo have maintained a songwriting relationship over the years, Cotton went on to work in a myriad of bands with remarkable vocalists such as Suzie McNeil.

After forming his own band for a period, Cotton reunited with Corin Raymond and they worked successfully for another 10 years, touring extensively as The Undesirables. Somewhere along the line, Cotton also found time to tour and work with Treasa Levasseur and Marshall Dane.

Over time, Cotton acknowledged the pressures of raising a family and moved to Burk’s Falls. He tried to uphold his commitments to bands in Southern Ontario but soon found the travel and workload was more than he wanted and chose to make Muskoka his base. From here he has built a steady following playing pubs, local festivals, and specialty shows.

Cotton is beyond skilled as a working songwriter-performer. He is a gifted singer and as a guitarist seems to know every song written, be it folk, rock, funk, or country. His ability to play fluently in almost any genre allows him to serve as a musical director for various projects, as well as perform in a broad range of venues. He has several records to his name. The most recent, Only Muskoka, features many of his renowned anthems to Muskoka life such as “Living on Muskoka Time”.

Sean Cotton is and has been a vital force in the music scene in Muskoka over the past decade. While there was already an established scene of working musicians in the area, Cotton worked hard to build his own brand and career. He has also been instrumental in supporting emerging and lesser-known artists. He has sought in his own way to help many young talents and older semi-pro players to find venues and opportunities to showcase their gifts.

Cotton began Tree Ring Records as an attempt to collectively represent the vast array of songwriters and performers throughout the area. Tree Ring helped establish many of the songwriters who have been heard over the past five years on local radio and international internet radio stations, such as Gina Horswood and James Jones.

More recently, he created River Mill Records in Burk’s Falls, which launched in 2018.

Sean Cotton has worked closely with existing area studios and producers, most notably with Andre Wahl who is responsible for the extraordinary success of country star Paul Lagendyk and Pam Miller. Cotton did an enormous amount work at Ghetto Blaster Studio in Bracebridge before he began his own production company. Since its inception, River Mill has seen hits from Overplay, Jamie Oppenheimer, Joe Thompson, and Sawyer Lance. 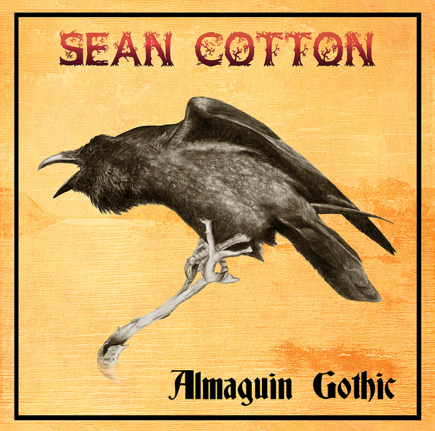 On April 30, 2021, Cotton released a new album, Almaguin Gothic, which might best be summed up as a collection of stories and portraits about local events and characters, both historical and fictionalized. Cotton produced, engineered, wrote, and played all of the instruments on the recording. It is a shimmering tribute to the environs Cotton lives in—riveting storytelling with finely etched details immersed in a beautifully realized musical setting, peppered with sonic interludes and sound effects, all meant to transport a listener into the heart of these tales. This is an outstanding achievement in a lifelong creative career, which deserves all the accolades and attention that will surely come its way.

Find out more or purchase the album at seancotton.ca.