You are here: Home / Feature / Sketching out: Meet Jennifer Snowden

Jennifer Snowden has a photographic memory.

“I can look at something and remember it very clearly.”

In other words, she is able to take a picture with her eyes and store it in her mind. Then when she’s back in the comfort of her own home with her trusty sketchbook, she will draw what she saw earlier that day. It certainly works to her advantage as an artist.

Jenn isn’t just any kind of artist. She’s a sketch artist who also has an incredible talent for cartooning and drawing comics. The sky is the limit when she puts pen to paper. It’s been a way of life for her for a long time.

The quality of her artwork will take your breath away. Her bold use of colour will mesmerize you. Her art has the ability to take you in. Her simple sketches are nothing short of brilliant and some of the characters she has created undoubtedly capture the essence of a true superhero. She has a thing for Japanese-style cartooning and spent six months training herself how to draw American-style cartoons. Some of the comics she drew for fun in high school will make you scratch your head and wonder why the hell she’s not making it big somewhere in the world. 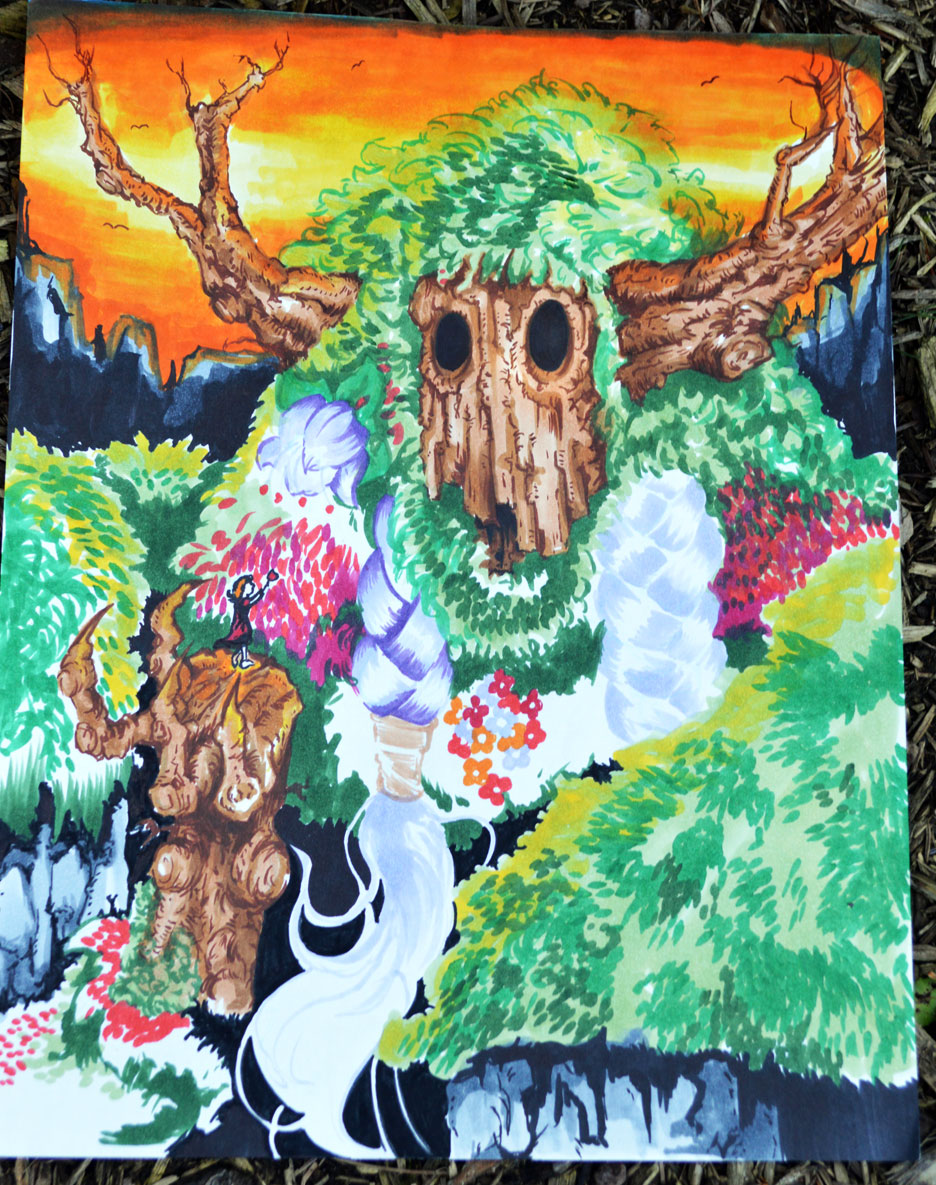 This beautiful piece was created as a result of her marker leaking on a piece of paper during the downtown Harvest Festival. 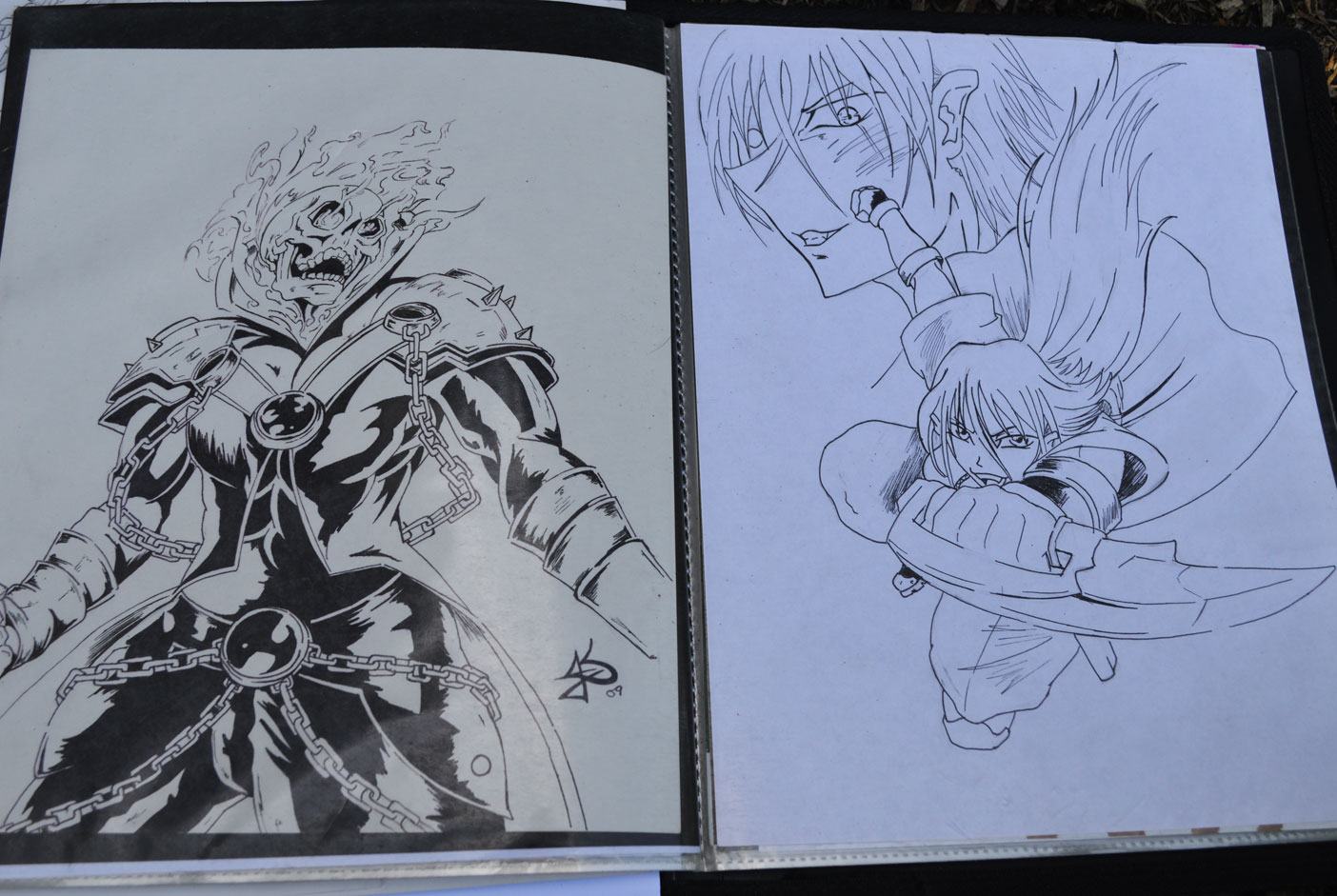 Jennifer was able to replicate a drawing of Marvel Comic’s Ghost Rider (left). The opposite image is a quick sketch of a character she made up. 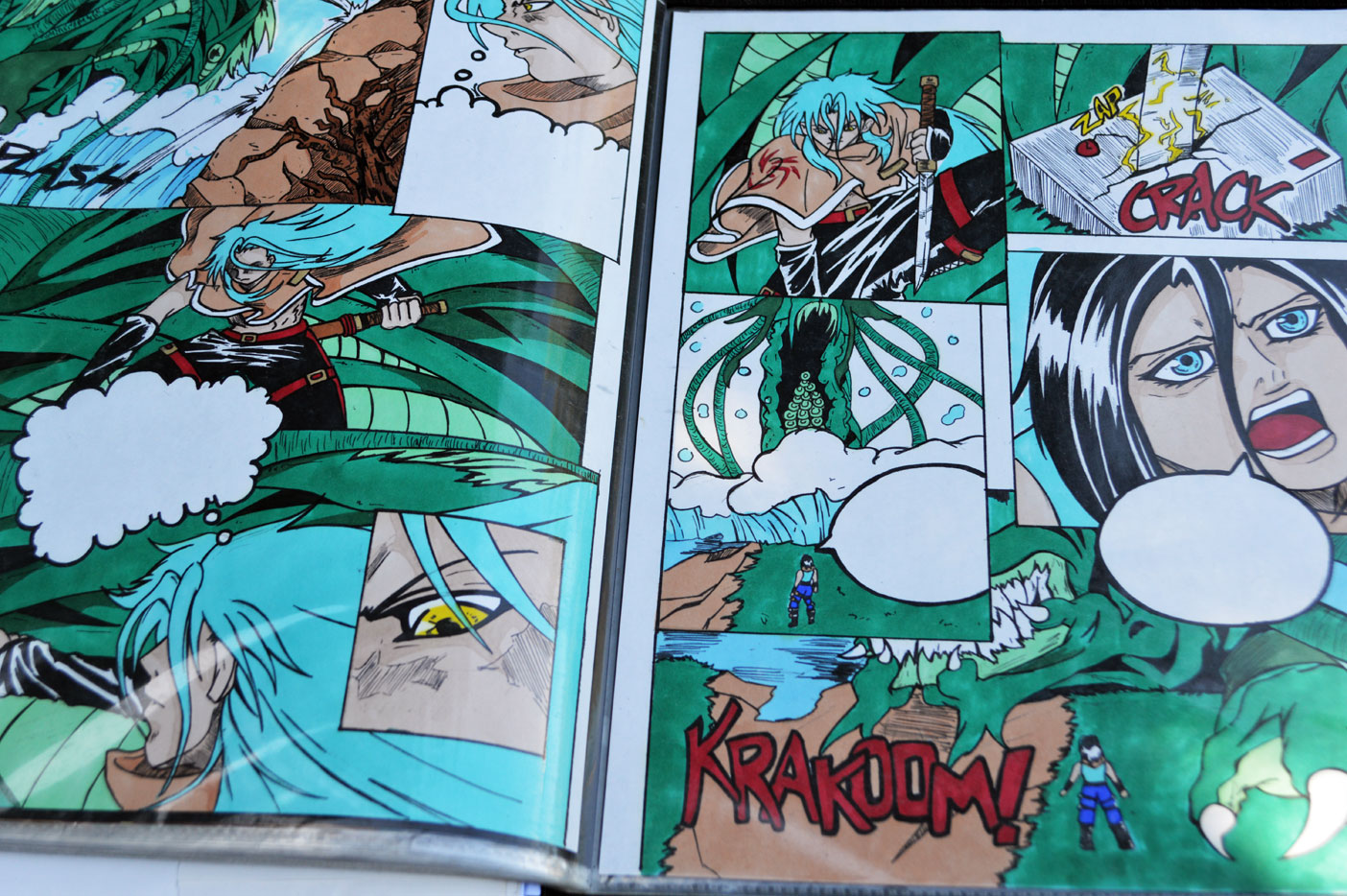 She is a master at comic drawing. This is one she did during her high school days.

The truth is Jenn is perfectly content doing what she loves right here in her hometown. Even if it is just for her own pleasure and not making her millions, Jenn’s happy.

For me, it’s not about the money. Sure, I have to live. I have to eat, I have to pay bills, but as long as I’m enjoying what I’m doing, the money will always come secondary. When I teach, I want to be able to share that with other people. Because to me that’s what matters.

Her gift for drawing was discovered as soon as she was old enough to hold a crayon. She started doodling when she was two years old. She doodled on anything and everything she could get her hands on, including school assignments and she was “bad for that.”

“When I was in high school, after I was done my exam I doodled on it,” she recalls with a laugh. “The next year, my teacher gave me a notepad to draw on after I was done. I still doodle on everything.”

But the apple doesn’t fall far from the tree because Jenn’s father also had an affinity for being creative. When the Junior A Wildcats were an active team, it was her dad who drew the panther on the centre ice of the rink at the arena. Both of her parents constantly encouraged Jenn to explore her creative side. She’s grateful for that; it had a big impact and a lasting one, too. That kind of encouragement she received as a little girl has been passed on to Jenn when it comes to her wanting to inspire others. 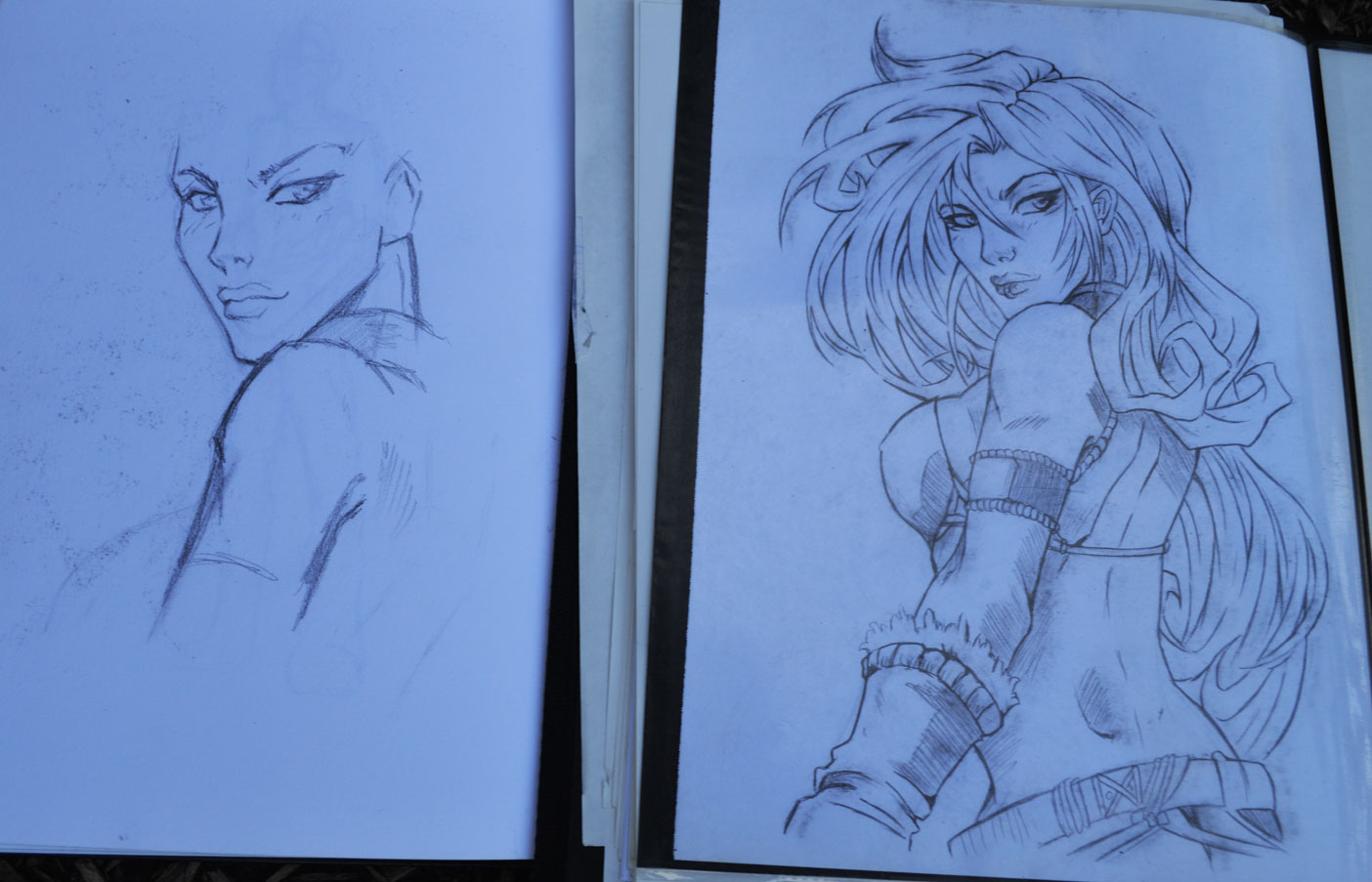 A quick outline can often result in a sketched masterpiece. 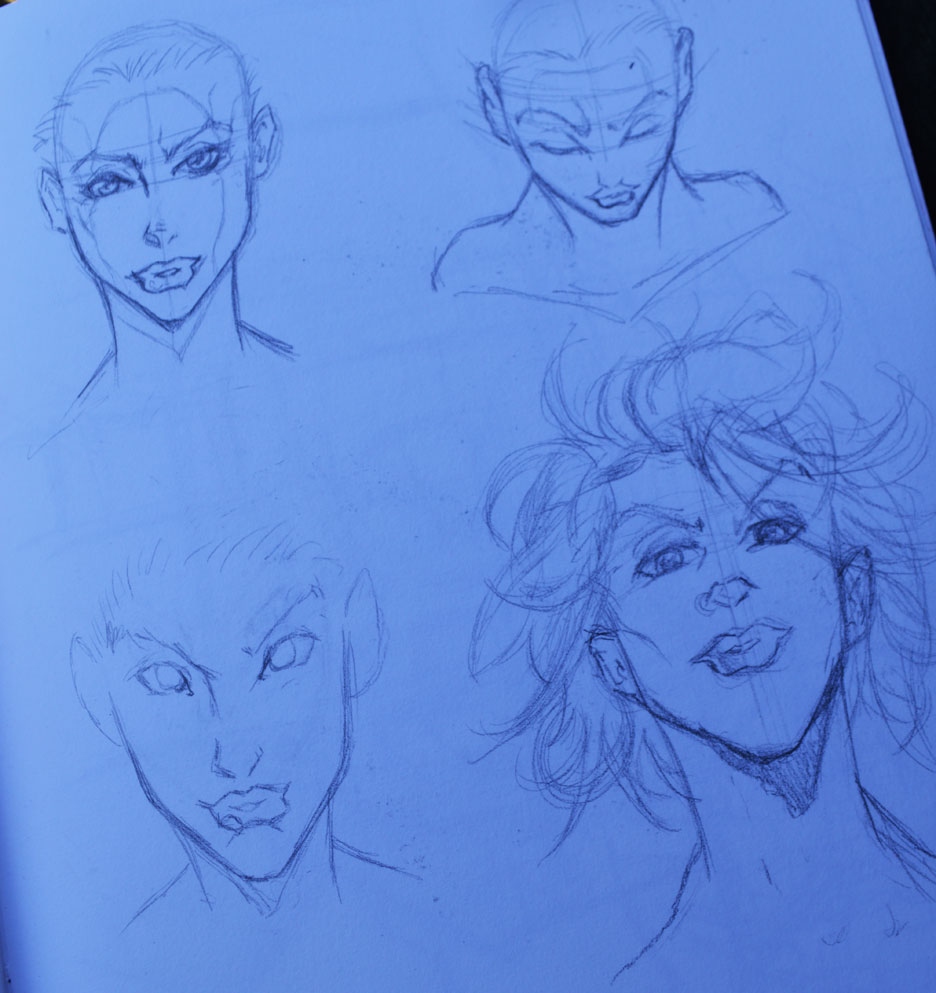 You need to be able to see the basic shapes in anything you draw. Here is how Jenn begins the process of drawing a character.

Last year, she taught cartooning to a group of kids at the Huntsville Public Library. It gave her a taste of how much she not only enjoys teaching people, but children seem to be able to bring out the best in her.

I really love kids and being able to teach them. There’s always something fun happening when you’re around them. I think that can help you stay young. Kids are the best.

This year Jenn was approached by Diane Finlayson, co-founder of More than Just Art, about the possibility of teaching some art classes. Of course, she jumped at the opportunity. After all, inspiring others brings her a lot of joy. You’re never too old or too young to learn, Jenn says, and there’s absolutely no limits to what you can do if you have a desire to want to create something.

She teaches a cartooning class to kids on Monday nights and an open art/painting class on Wednesday nights. Both classes could use a bigger turnout, so Jenn is spreading the word any chance she can get. She’s the kind of teacher you would want to learn from. She has a unique ability to make anyone feel comfortable and capable, even if they are handling a paint brush or drawing a cartoon for the first time.

“It’s always enjoyable to hang out with people who have the same interest that you do. I never have the attitude, ‘I’m the teacher and you’re the student.’ I really try to be receptive to other people’s ideas because in art there’s always something new to learn. What I take from it is we’re a bunch of friends sitting in the same room, exchanging ways of doing art. My goal is for everyone to have fun.”

When she’s not drawing, Jenn works a part-time job at a local grocery store. She loves to lose herself in a good book (obviously science fiction and fantasy are at the top of her list) and she is also a big player of video games. There’s something fascinating about the art direction in video games, she says, and she has always appreciated that. It wasn’t too long ago that she was in a gamers’ chatroom when she decided to post a sketch of a character she drew. A guy from the States saw it and told her to contact a company that could potentially accept and use her original work. She knew she had nothing to lose and went ahead and submitted a sample of her artwork. She is currently doing some cartooning for the Florida-based independent comic book company Altercomics. 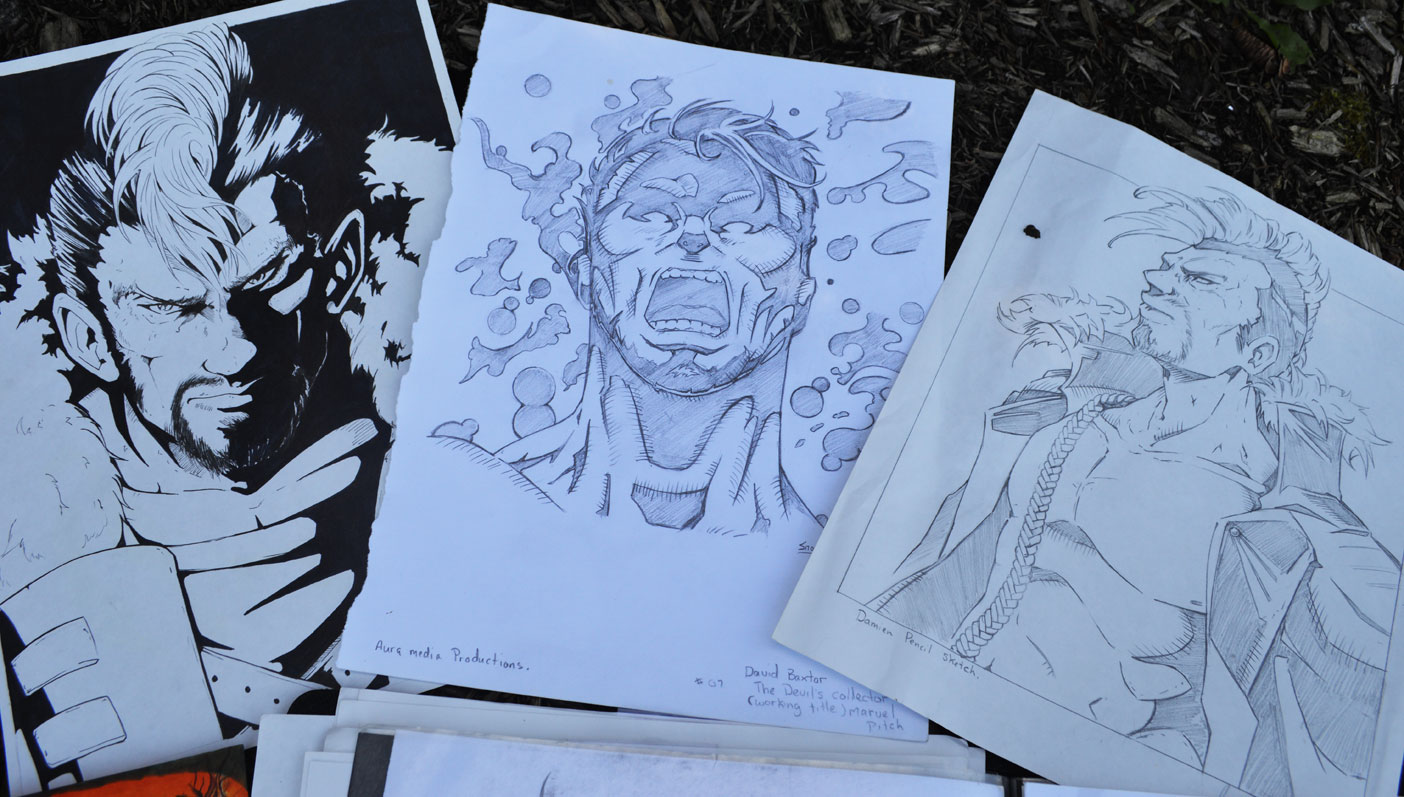 With her creative mind, Jenn thought up her own superheroes. 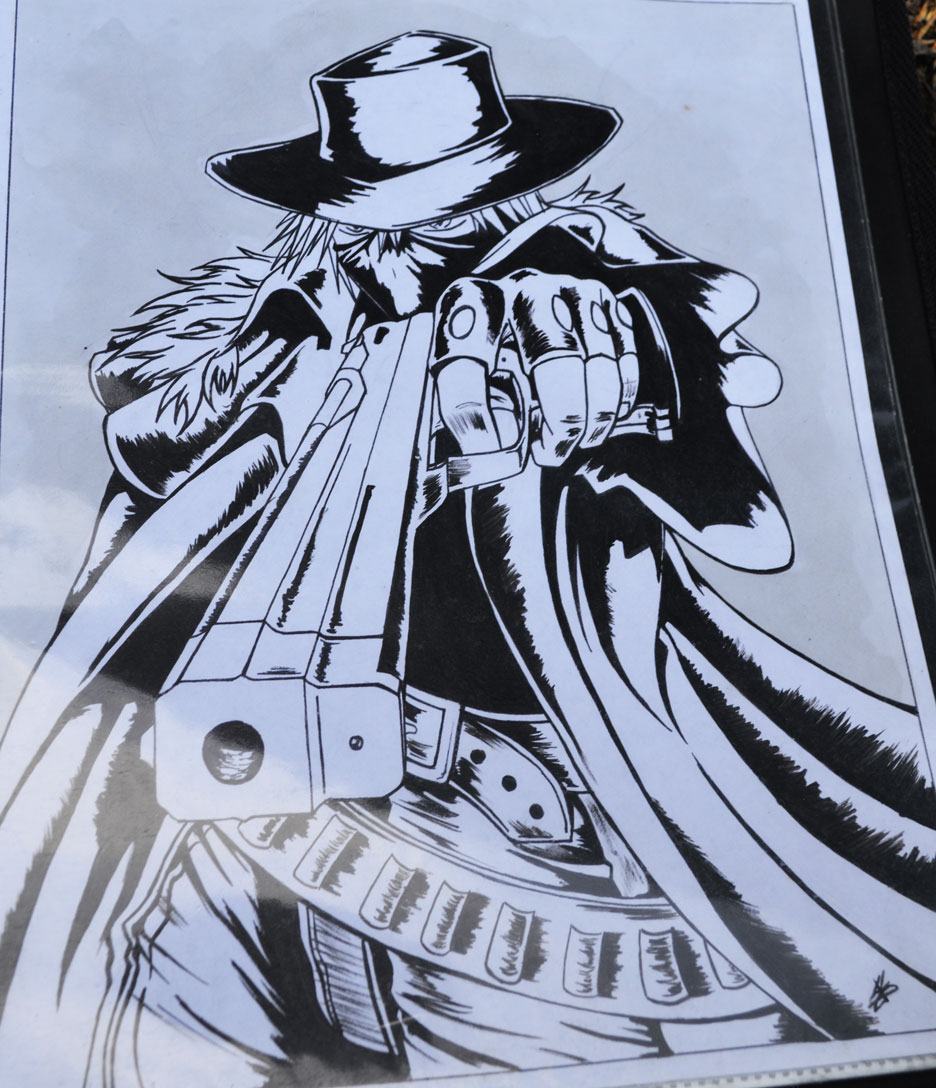 This guy definitely looks like he belongs in a comic book. She certainly has got skill!

As for what the future has in store for this 30-year-old, Jenn says she will just keep drawing and creating and sharing that with people. Money should never get in the way of doing what you love. Besides, things have a funny way of unfolding just as they should. And it’s usually when you’re least expecting it.

(Anyone who is interested in taking part in Jenn’s art classes can contact her at 705-788-4516. To check out more of her work visit https://kinmabrightmoon.deviantart.com).