You are here: Home / Commentary / Sexual misconduct in the military and the blame game | Commentary

Who knew what when? Who cares?

Somewhat predictably, the blame game is now centre stage. Not the abuse, not the sexual misconduct, not the investigations, not the victims, and certainly not change.

If we focus long enough on the blame game of who knew what when, perhaps the issue will move out of the limelight once again. You knew… no but you knew first… no but you knew more detail… no but you should have known… The reality is that you all knew. And if you think you didn’t, think again. The sexual misconduct incidents recently exposed are a reflection of our own culture. And the issues in the Canadian military are not something that has suddenly come to light. There are class action lawsuits, previous high-level investigations, external reports, media exposés, and the list goes on.

I served. For almost 21 years, I served as both a soldier and an officer in the Canadian Armed Forces. I retired years ago and have since watched and hoped for substantial change every time there was another class action lawsuit, external review, or media exposé; and every time, my naïve hope went again unanswered.

So now an ex-chief of defence staff (head of the military) and his replacement are both under investigation for sexual misconduct. The current chief of defence staff is having to backtrack on his very recent and vocal support of another general who gave a character reference at the sentencing of a soldier convicted of two sexual assaults. Am I surprised that the focus is on the political who knew what when? Not at all.

Recently, the Canadian Armed Forces/Department of National Defence Sexual Misconduct Class Action was settled. This allows for anyone who experienced sexual misconduct while serving between April 1985 and November 2019 to make a claim. I learned of this by chance when I read a newsletter intended for serving members. Since that would include just about every woman who served during those years, many of whom are now veterans, I reached out to a number of those I knew. None of them had been notified or even knew about the class action settlement. Veteran’s Affairs Canada, which issues our pensions and thus has all of our contact details, had not notified anyone of the settlement that is likely to affect them. Over the past year I have written to Veteran’s Affairs twice asking what is being done to notify veterans who served during this time. As of the date of writing this article, I have not received a response.

I have submitted a claim under this class action settlement. It covers the latter half of my service. During the time I served, sexual misconduct was basically a condition of service. Put up with it or face the consequences. I witnessed the consequences for other women, and so I put up with it. The incidents I outlined in my submission were just a snapshot of my experience as a woman in the military during those years. To recount every verbal or physical sexual misconduct would, basically, be to recount every day of my military career.

This is my story and the story of so many women, many still serving. Yet right now, if I am to believe what I see and read in the media, the most important issue is who knew what when. Did Harper know first, did Trudeau know everything, did the chief of staff tell the PM, what did the minister of national defence know and when, who knew or said something in this committee or that? Let’s be real: the most recently exposed sexual misconducts in the military are nothing new; it has been endemic for years and we have all known about it, but it just hasn’t ever made it to the top of any government’s to-do list.

What do I want? I want us to stop focusing on who knew what when and focus on what happened to real people. I want to see true leadership and change. Start with having an external investigative service to investigate sexual misconduct in the military. We all know that there needs to be independence in these investigations, and we know about the need for discipline and the chain of command in the military. And by the way, I served with the military police who are charged with conducting these investigations. It is a well-trained police force but that does not change the conflict of interest and pressure from on high that so often accompanies these investigations.

Please, if you were considering it, don’t put a comment to this article that says, you are sorry for what happened to me or tell me I am brave or courageous for writing this. Don’t patronize, don’t be sorry; change or be the vehicle of change in our culture. Change the culture in our society that makes sexual misconduct the minefield that most women navigate every day in the workplace. The military has its own issues of rank and discipline which allow for a level of abuse of authority not found in many workforces, however, make no mistake, the Canadian Forces is a reflection of the culture of Canada. These are Canadians acting the way Canadians act. And the convenience of the hierarchical structure is just an additional opportunity for the same misogyny and privilege that is embedded in the culture of our society.

You might ask, why did I stay for almost 21 years? Easy—I loved my job, I loved serving my country, I was good at what I did, and I wanted to be a catalyst for change for the women that would follow. I was but, sadly, it wasn’t enough to change the culture. I still believed in what I was doing enough to stay and enough to write about it now. 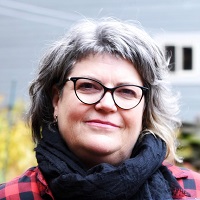 In 1975 at the age of 17, Nancy Osborne joined the Canadian Forces as a private and was among the first few women in a previously male-only branch. Thus began 40 plus years of being the first – and often – the only woman in some of the biggest boys’ clubs around the world. After 20 years of breaking through the cement ceiling in the military, she retired as a Major. She was then recruited by the United Nations to be one of the first women providing risk analysis and access negotiations for humanitarian operations in some of the most dangerous and culturally misogynistic places. She has worked in over 40 countries including Sudan, South Sudan, Afghanistan, Pakistan, and East Timor but has considered Huntsville her home for more than 25 years. Twice retired, she is still active as a professional speaker, facilitating leadership training as a consultant for Mohawk College Enterprises and providing training tailored specifically for women under her I Got This company umbrella. Nancy does not have a bucket list but is certain that there is always another great adventure right around the next corner.