In a world where face time has been replaced by FaceTime and we look more into screens than we do each others’ eyes, Séan McCann is pushing against the tide in the best way he knows how: with music.

As a founding member of Great Big Sea, McCann knows better than many the influence of song. It can be a powerful healer; or it can be a place to hide from the truth, and from whatever pains us. After more than 20 years with the popular band, he knew he had to leave its signature, high-energy anthems behind – and the party lifestyle that came with them – and face the pain of his past.

“Our brand was synonymous with rum consumption and using alcohol to relax and really not face your problems. We were selling a fantasy,” says McCann. “There is a place for that, I think, if you can do it safely and without dependence. For me, over time, the fantasy became a bit of a reality…  The reason people drink, or seek a drug or some kind of thing that will take away their pain temporarily, it’s all about avoiding the truth.”

He is open now about the sexual abuse he endured as a teen and about the alcoholism that followed, but it took a long time to get there.

“It’s easier not to engage what’s bothering you, the source of your pain. I advocate that once you do that, there’s great satisfaction and joy and accomplishment,” says McCann, who often does public speaking engagements in the mental health community. “People say I’m brave, but I’m not brave, I’m no different than anyone else. Maybe I was in a position where I had no choice, but I did ultimately decide to dig in there and face my history which includes sexual abuse and addiction. It was only through doing that that I came out the other side.”

His therapy was, and is, singing and songwriting. After he left Great Big Sea, he found that songs – “songs that say more and speak to real issues” – enabled him to face his truth and be stronger for it.

I felt isolated and alone. I kept my secret to myself because I didn’t think anyone would listen. I hated myself, but it was all on me. When I sobered up, sobriety made me face that past because it came back in the form of nightmares. I couldn’t hide from it. I really wanted to drink but I started writing songs instead.

One of the first was “Hold Me Mother”, with lyrics like these:

And what a ride it’s been. “Hold Me Mother” became part of his first solo album, Help Your Self, produced by friend Joel Plaskett, and released digitally with no label, no manager, and no slick publicity. McCann was surprised by the response.

“These songs reflected my real truth. I put myself on the line, not just an image of a Newfoundland shanty band, a real human person. I don’t know what I was so afraid of after it was all said and done,” says McCann. “There’s a real freedom in expressing yourself honestly. The reaction was huge and intense and it was people saying, ‘Thank you for these stories. I know these stories because that’s my mother, that’s my brother, that’s me.’ The responses were so many and so sincere that I just realized that I was not alone. And that was a huge leap forward for me.”

A second album, You Know I Love You, followed, also digitally but McCann wanted it to have some weight, a physical presence, too. As he wrote them, he had been sending the songs to musician friend Meaghan Smith to ask ‘is this any good?’ and she was compelled to respond with paintings that represented where the song took her. 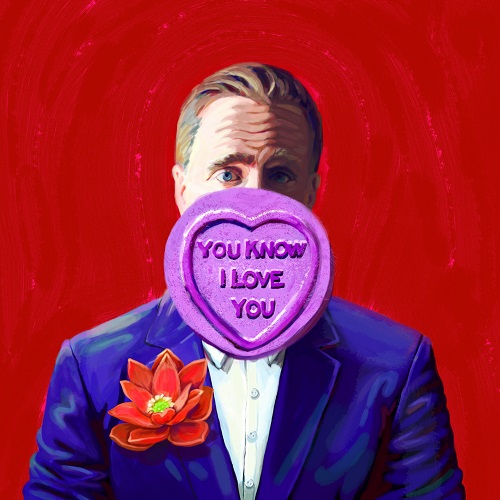 You Know I Love You (Painting by Meaghan Smith)

“Once we got through that, I thought, we have these beautiful things, they deserve to be in a book, more than a thumbnail on iTunes,” says McCann. The result is a 24-page songbook, which he only sells at live shows, with the images, guitar chords, the piano notation and the song lyrics, “so people can literally sing along with me at the show. I don’t have a script or a set list. I talk very openly and I just try to be as present as I can and I really try to get people to sing. I just know when you sing, and everyone does occasionally, it always makes you feel lighter.”

A third album, There’s a Place, is in the works and McCann plans to include some of those songs when he plays the Algonquin Theatre on August 12. “It’s a very pastoral record, very much inspired by Ontario – less ocean more leaves,” says McCann, who now lives in Manotick, a rural suburb in southern Ottawa. “I’ve always been an outdoor person which is why I’m drawn to Huntsville: I’m a paddle guy, I’m a trail guy. I find the best version of myself is either on stage with a crowd of people, getting them to sing with me, or alone in the woods or alone on the water, in nature. There’s a certain peace and a real power to it and that’s where this next record is going.”

As with his second album, McCann is trying to figure out how to deliver There’s a Place physically. “I have some ideas, I’m trying to keep people’s eyes off screens. My latest idea is an illustrated colouring book so while they’re listening to the music, they might have their phone but they’re not looking at it. I love colouring too, but I’m really bad at it. My kids are teaching me.”

His audiences are teaching him things, too, and reminding him of what’s important.

People always have something to say to me now, and it’s not let’s go have a pint. I get a lot of truth. If I can get people to be brave enough through my music to move forward, then I am doing something important, I feel like it gives me a sense of purpose. As an addict, that’s important, because that’s what addicts tend to forget and that’s how they get in trouble… (Music is) encouraging, it’s hope. In this world today, we need that, we can’t lose that.

Séan McCann plays the Algonquin Theatre on Saturday, August 12. Tickets are available at the theatre box office or online here.