A proposed zoning amendment that would pave the way for a 138-unit retirement home on Highway 60 to the east of the town’s core isn’t sitting well with nearby residents and the Fairy Lake Association.

A sign and a currently unused Lakeside Place Condominiums sales office as well as a dock are the only development on the subject lands now but, if the zoning amendment is approved, a 30,250 square foot structure could be built on the property.

In 2003, a site plan was approved for a 38-unit multiple residential building on the subject lands, prior to adoption of the current Official Plan (2006) and current Comprehensive Zoning Bylaw (2008).

That site plan met previous shoreline development setback requirements of 10 metres at the time of approval, a requirement that has since been changed to 30 metres. The Town’s solicitor has stated that the site plan no longer meets current zoning for the shoreline setback – before a building permit could be issued, the proponent would have to seek a zoning amendment for relief from that provision.

Further, the lake area and creek adjacent to the subject lands are classified as Type 1 fish habitat by the Ministry of Natural Resources and Forestry, which requires a 20 metre setback per the Official Plan, and a minimum 15 metre natural vegetative buffer located directly adjacent to the shoreline. Without a favourable fish habitat assessment prepared by a qualified professional, Town staff have said that they cannot recommend that the setback be reduced. The District of Muskoka, in a letter to the Town, added that an Environmental Impact Assessment which demonstrates “net improvement to water quality will be achieved…and fish habitat will be protected” is needed before the application can be considered.

The proponent, however, is seeking legal opinion as well, believing that the setback on the approved site plan is still valid and should be grandfathered for the proposed development, which has recently been altered from a multiple-residential building to that of a retirement home. The current application for a zoning amendment involves a request to increase the height of the building.

The proponent’s planner, Savas Varadas of Plan Muskoka, was before Huntsville’s Planning Committee on April 12 to explain the development and the request for a zoning amendment to allow a height increase from 11 metres to 15.1 metres.

A rendering (elevated view) of the proposed development from Highway 60 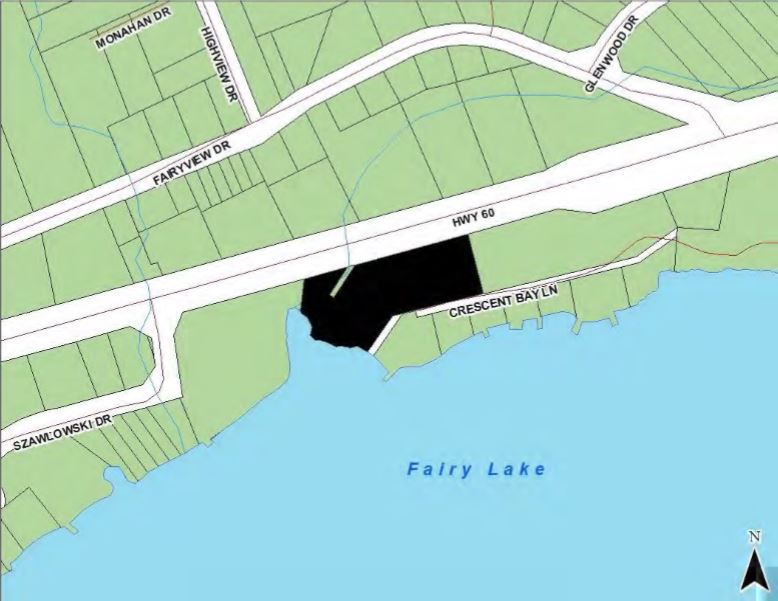 The location of the proposed retirement home

In addressing objections to the development, he said that the lot coverage meets requirements, although it’s almost at maximum at 39.9 per cent, that parking exceeds the required 45 spaces, that use as a retirement home is already permitted within the R4 zoning and that the setback from the shoreline was previously approved.

As for the height, he argued that the number – 15.1 metres – doesn’t tell the true story. “The zoning bylaw defines height as the vertical distance measured from the average finished grade from the side of the building facing the shoreline… at no point does it reach 15.1 metres.” He said that the visible height of the structure is actually 12.2 metres from the lake and 11.6 metres from the highway.

Varadas added that “an extremely tall buffer of trees exists along the lot line between the properties (the proposed development and residences on Crescent Bay Lane), and the land across the highway rises gently, providing a backdrop when viewed from the lake. The additional height proposed I don’t believe creates any significant visual impact beyond the already permitted height of the R4 zone.”

The development is expected to create 50 permanent jobs in Huntsville, said Varadas, as well as $40-50 million in construction contracts.

Local residents and the Fairy Lake Association object to the development on several fronts.

Crescent Bay Lane resident Gary Mousseau told committee that he thinks the development is “an attempt to put a square peg into a round hole… When you add change upon change it might seem minor, but when you look at a 37 per cent increase in height (from 11m to 15.1m) and a 66 per cent reduction in setback (from 30m to 10m), suddenly 40 per cent coverage makes sense to build what is a tremendously large structure in what is a very small piece of property. It will tower over Crescent Bay Lane I believe.” He also said that with the number of residents and potential visitors to the building, the increase in shore usage in a sensitive area is a concern.

Ann and Brian Bell, also Crescent Bay Lane residents, wrote in a letter to the Town that the proposed building “overwhelms the property… A building of this enormity would completely destroy the natural beauty of the lakeshore. It is totally out of character with the adjacent single-family residences. It would be an eyesore from the lake, for some distance along Highway 60 and to those who live across the highway. The much talked about window to the lake would be gone.”

Bob Macaulay, Chair of the Fairy Lake Association Land Use and Planning Committee wrote to the Town to express concerns with the development as well. “Although we recognize that there are existing development rights which flow from the existing registered site plan and agreement, the current proposal is much more than just a minor ‘tweaking’ revision of that prior site plan… (and) ought to be subject to a new site plan approval process (and agreement) which is fully evaluated in the context of today’s planning policy and zoning regime.”

Macaulay argued that grandfathering of site plan approvals in process before the adoption of the current Comprehensive Zoning Bylaw are contingent on development occurring on the site within two years of enactment of the bylaw, and that no physical development has actually happened on the site.

The Town has received other letters of objection from Fairy Lake residents, who have gathered more than 75 signatures on a petition against the development.

Following questions from councillors, the Town’s Manager of Development Process, Kirstin Maxwell, confirmed that a building permit for the proposed development could not be approved unless the current 30 metre setback requirement is addressed through zoning.

She also noted that “the zoning bylaw has a very specific provision that says if no development has occurred within two years of a registered site plan and a new zoning bylaw being put in place then they have to meet the requirements. … (based on examples from the Ontario Municipal Board) there has not been development on this site that would warrant maintaining that existing site plan.”

Maxwell confirmed in a follow-up phone call with Doppler that, in 2015, the District of Muskoka extended the approval of the former condominium application for a period of three years – an approval that Varadas cites as evidence that the original setback of 10 metres is valid. But Maxwell said that the new proposal would still have to meet current zoning requirements. “The site plan was registered on title, but since we’ve changed the regulations they have to meet new zoning requirements with whatever they are proposing to do on the property.”

At the meeting, Mayor Scott Aitchison ventured that, in addition to physical development, perhaps the Town should take into consideration “the money people have spent on plans and studies and architects and designs” in such cases as evidence of development.

The report was presented to committee for information only. The proponent has been asked to provide additional documentation including an amended application requesting relief from the shoreline setback requirement justified with a fish habitat impact assessment, additional information regarding the potential visual impact of the development, details on how the existing vegetative buffer will be maintained/enhanced and protected adjacent the single family residential lots on Crescent Bay Lane, and more information regarding functional servicing, stormwater management and construction mitigation.