There is much to be celebrated about the life of local sculptor Brenda Wainman Goulet, a talented artist and generous ambassador for the Muskoka arts community.

Brenda died suddenly on January 18 at home. As her death became known throughout the community it was met with an outpouring of grief.

“Art that has depth makes a strong impact on the spirit, emotion, mood and thoughts of a human being,” Qing dynasty painter Li Shan said. That was true of Brenda’s art, and also of the effect she had on those who had the pleasure of knowing her.

In Huntsville, Brenda was perhaps best known for the Tom Thomson statue in front of the Algonquin Theatre, a familiar and beloved site for locals and tourists alike. The statue was unveiled on May 18, 2005 by then-Mayor Hugh Mackenzie and council members as part of celebrations for the opening of the new Algonquin Theatre and Huntsville Civic Centre. Brenda spent approximately two years working on the bronze sculpture. Mayor Scott Aitchison noted at council’s meeting this week that Brenda created the bronze of Tom Thomson and his canoe for half the price “because she was so excited about the project.”

Its prominent location prompted mourners to leave flowers and other items in her memory at Tom Thomson’s feet or nestled in his arms. Among the tributes was a letter from Mayor Aitchison.

“Thank you Brenda Wainman Goulet for all of the grace, all of the beauty, all of the love and all of the talent you shared so generously with all of Huntsville,” he wrote. “We are sad that you have been taken from us too soon, but we will always remember you with thanks for having known you. With heavy heart we say good bye to our dear friend, but know through your many gifts we will always see you. Thank you Brenda. May you rest in peace.” 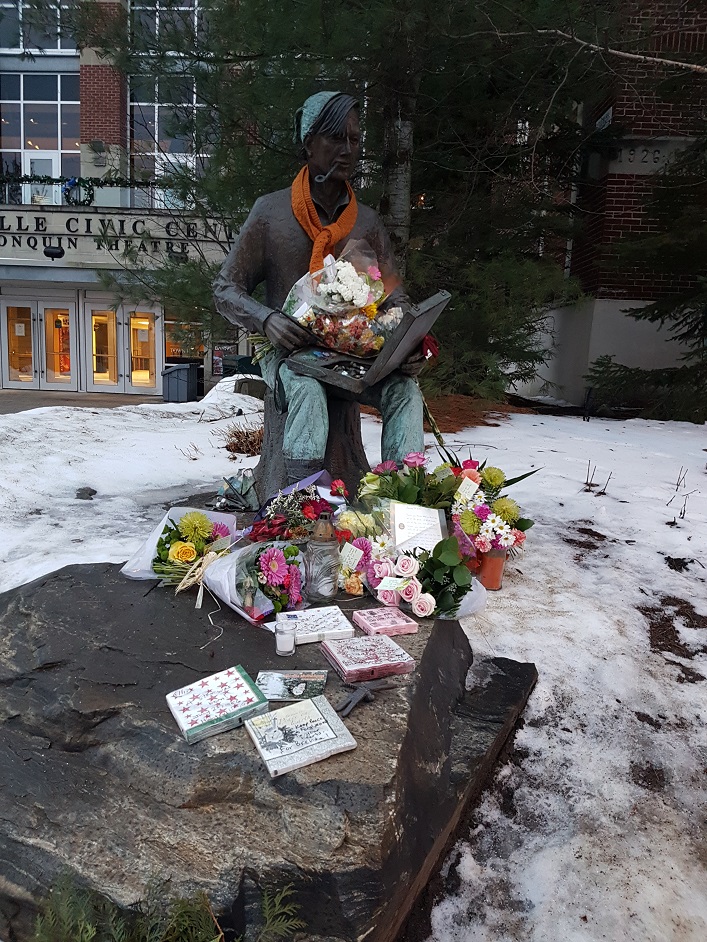 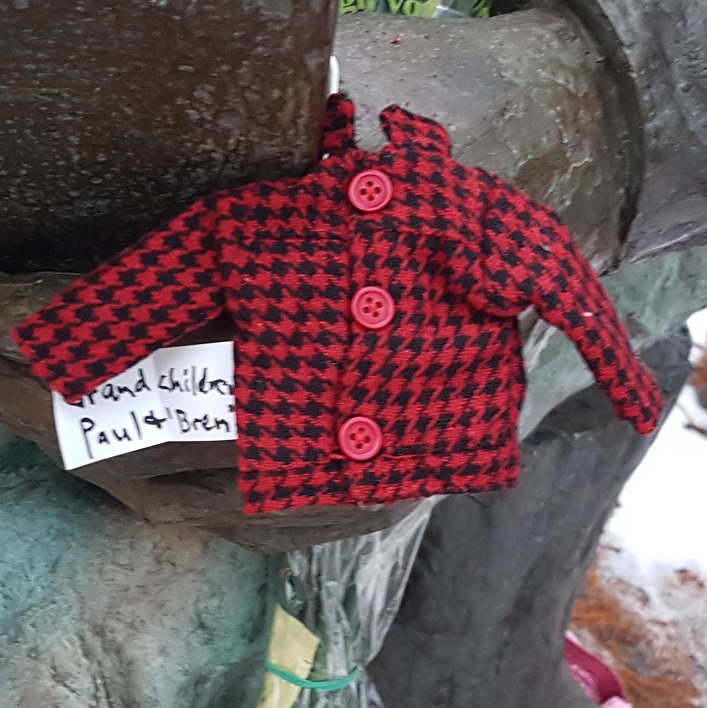 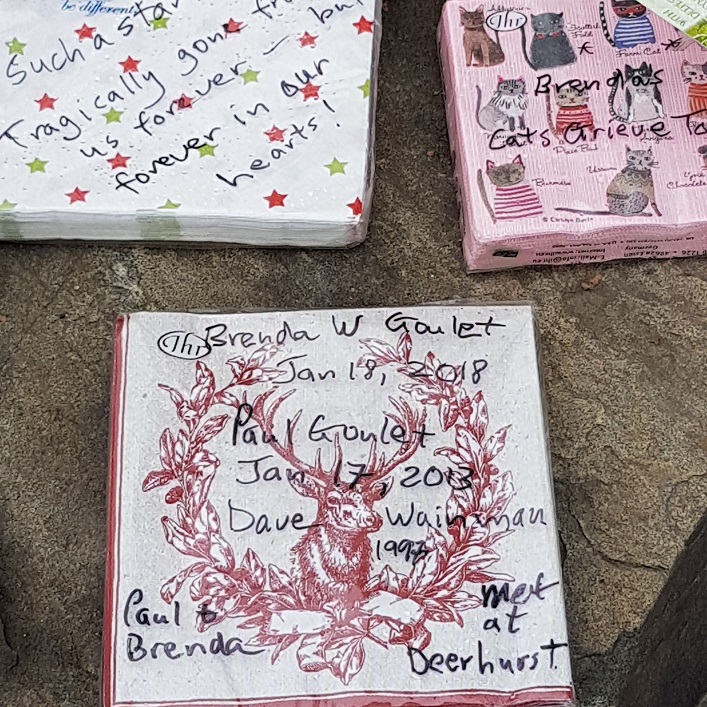 Another, less noticeable sculpture created by Brenda sits across the street from the Tom Thomson statue. A bronze broom in memory of Donnie Eagles that was commissioned by the Downtown Huntsville BIA leans against the entrance to River Mill Park.

“The merchants and Board of Directors of Downtown Huntsville are greatly saddened to hear the news of Brenda Wainman Goulet’s passing. Our heartfelt condolences are extended to her family,” said Helena Renwick, Executive Director of the Downtown Huntsville BIA.

“The memory of her artistic excellence will forever be present in the core of Downtown Huntsville in two ways:  with the statue of Tom Thomson accompanied by his canoe, and the simple yet elegant Bronze Broom commemorating one of our own,  Don “Donnie” Eagles.  The Tom Thomson statue is by far the most photographed item in our Town and continues to be a focal point of our small community,” said Renwick. “Brenda brought history to life with her beautiful life-size bronze statues. She will be extremely missed by all of us in Downtown Huntsville.”

Teri Souter, the Town’s Manager of Arts, Culture and Heritage, who has known Brenda since she was 18, said, “It’s a huge loss. She has left a large legacy of her work but she has also added such joy to the whole sector. She had such an amazing sense of humour. She was humble and didn’t take herself too seriously, but she took her work very seriously. She was a very strong and informed advocate for the value of arts in our community.”

Souter recalls Brenda’s first show at Deerhurst Resort (then Deerhurst Inn) in 1982 and marvels at the body of work she has created since, though not with surprise. “My first impression of her was that she’s a very hard worker… I am so very glad to have been an early supporter (of her art).” 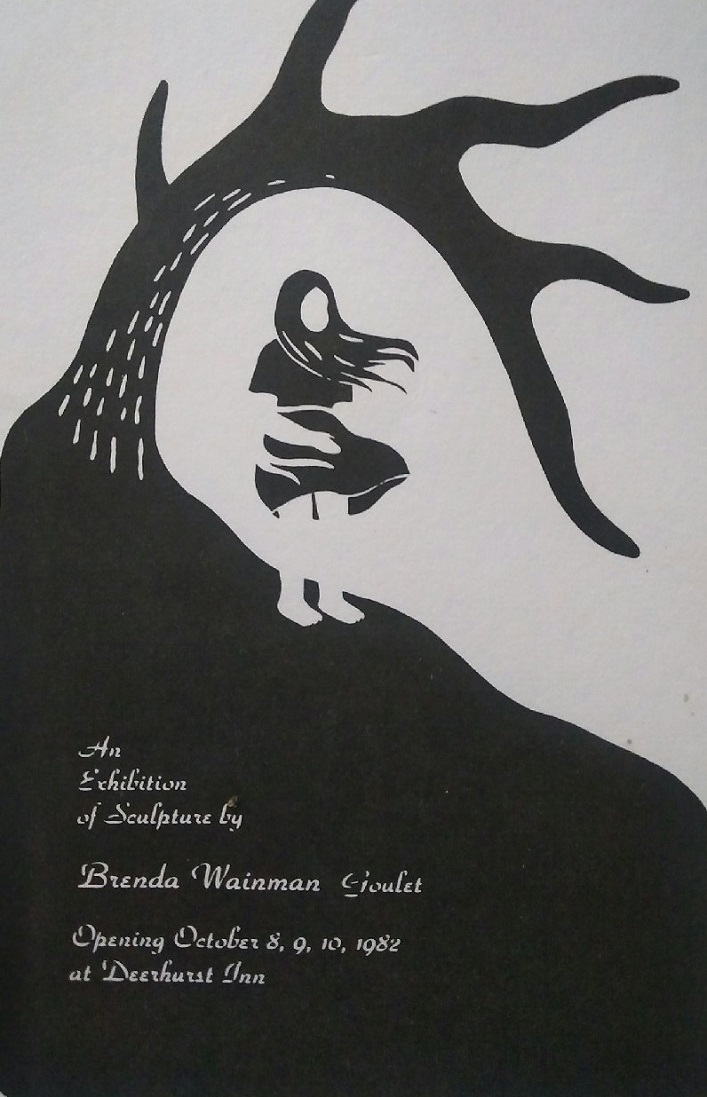 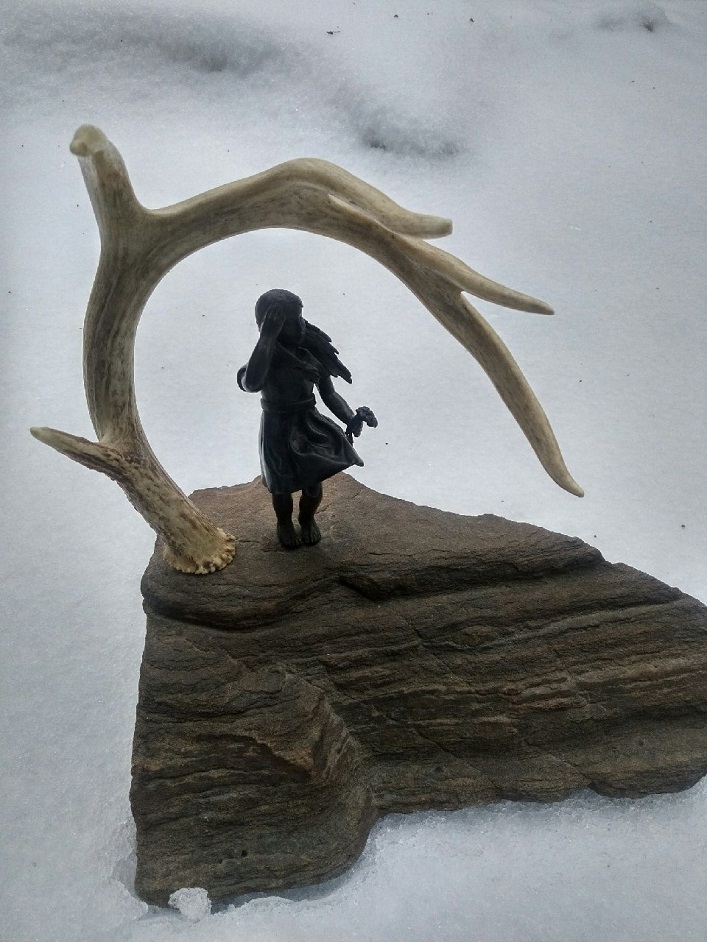 Fast forward to today where Brenda’s work is dotted throughout the community’s public spaces, and is housed in many private collections around the world.

She was also part of the art placement working group at the Canada Summit Centre (CSC) from 2008 to 2010, which led to the rotating art exhibits that are on display there to this day, said Souter. Some of Brenda’s work, along with her daughter Danielle’s, is in the current exhibit at the CSC until February 13.

What a gift Brenda has been to us as an artist and a friend and what a legacy she has left that will be here long, long after we are all gone.
Teri Souter

Souter added that the way Brenda valued excellence extended beyond her art. “It was in the way she lived her life. She was an exceptional cook and a gracious host, always. She was so proud of her family and her children, and she was so supportive of so many artists that she came in contact with.”

Some of those artists were members of the Muskoka Autumn Studio Tour (MAST), which Brenda joined in 1992, and Artists of the Limberlost, of which she was a founding member.

Catherine O’Mara, Chairperson for the Muskoka Autumn Studio Tour, noted that Brenda is a gifted speaker, expressing “the importance of art, artists and her love of Muskoka in a most eloquent way.”

O’Mara shared an excerpt of the speech Brenda made for the MAST 30th anniversary:

Each of us in deciding to become an artist took a ‘giant leap of faith’. A leap that meant relying on ourselves, our skills, our creativity and our ability to express our inspiration and enthusiasm to others. For most of us it was many years of education, hard work, trial and error – many solitary hours spent in studio and shop. And although there is not one artist that I know of that became one for ‘the money’, being one is not without its riches. For those of us who have been part of this tour over the years, we’ve felt privileged to live and raise our children in such a beautiful place as Muskoka – to be part of such a group of talented artists and to call them our friends and to each day follow our hearts and our passion — to create today that which didn’t exist yesterday.
Brenda Wainman Goulet for the Muskoka Autumn Studio Tour 30th Anniversary in 2008 (as shared by catherine o’mara)

“As we look to celebrate the 40th year of the Muskoka Autumn Studio tour we will miss her warm and passionate words as I’m sure we would have called upon her once again,” said O’Mara.

She will be missed, too, by her fellow Artists of the Limberlost.

Higgins added that people always loved to visit Brenda’s studio. “Bronze sculpture is not a medium that the public is generally familiar with, and she was always eager to share her work and explain her process with interested visitors.”

“Beyond her many public art commissions, she completed a host of private commissions and independent art pieces expressing her own ideas, always with an appreciation for the local environment, and often with a touch of whimsy,” noted Higgins.

Together, they created a new award for the Huntsville Festival of the Arts in honour of the organization’s 25th anniversary.

“Last year, when the Huntsville Festival of the Arts approached both Brenda and me individually to offer proposals for a new award, Brenda suggested that we work together on a piece incorporating both sculpture and glass. It was a modest project, but I was honoured and privileged to experience Brenda’s confident, can-do attitude and creative spirit first hand. I will be forever grateful to her for that experience,” said Higgins.

Although Brenda had moved her home and studio away from Limberlost Road a few years ago, “Artists of the Limberlost as a group made sure we found a way for her to continue on the Tour,” said Higgins. “She was one of us, and we shall miss her always.”

The outpouring of comments and memories shared by Brenda’s extended community of friends, fellow artists, clients, and those who appreciated her work have helped to comfort her family some.

In response to comments posted on Huntsville Doppler, Brenda’s mother, Joyce Trafford, wrote, “I am reading all the wonderful comments on my daughter Brenda Beryl Wainman and my thoughts go back to her earlier years growing up in the park. And on many trips from Cache Lake, as I was driving the car, I would say to her ‘what do you see’ and she would say in her little two-year-old voice, ‘Rocks, trees and snow’.  And in reflection that is what she became famous for, her Rocks. We will all miss her and her talent, but I am so proud of her accomplishments, and I am sure her legacy will be seen through her daughters, all of them with a talent in their own selves, especially Danielle with her creative line of jewellery. Brenda’s spirit will be with them throughout their lives. Rest in peace darling beloved daughter of mine. Love from Mom.”

Brenda’s brother Mike Wainman added: “Our families were just beginning to get our footing again after the sudden and tragic death of our beloved Paul Goulet 5 years ago, when the earth fell away below our feet. Our hearts are heavier than all her bronze and rock sculptures put together. She put as much love, passion and workhorse ethic into her family as she put into her pieces.

“‘Aunt Brenda never says No!!’ She was an amazing Aunt to Grace, Harland and Rose and a truly beautiful sister to me,” wrote Mike. “She had such a lust for life and she was so looking forward to adding more chapters to her story. She will leave a huge hole in all our lives. Thank you so much for all the condolences and kind words. They are difficult to read but are very comforting to all our family. Far too soon to say goodbye. We love you Bren.”

Brenda is predeceased by her husband Paul. She is survived by her three loving daughters Halley Clover (Adam Clover), Mallory Goulet (Trevor Clancy), and Danielle Goulet (Casey Noble) and her cherished grandson Paul, as well as her mother Joyce Trafford, her brother Mike Wainman, sister-in-law Pennie Wainman, nieces Grace and Rose Wainman, nephew Harland Wainman, uncle and aunt Gord and Helen Wainman. She is predeceased by her father David Wainman.

A celebration of life will be held at the Algonquin Theatre on February 17. (More details to follow.) Her family asks that, in lieu of flowers, donations be made to the Huntsville Art Society in her honour.