It’s a curious thing to see. Leaning against the sign that marks the Main Street entrance to Huntsville’s River Mill Park: a lone bronze broom. It’s not an unusual art installation nor a political statement. And you’d be forgiven for walking right by without noticing. But if you pause to read the plaque, it tells a story of inclusion and of a man who grew to be loved by a community who cared.

Donald “Donnie” Eagles died at home on June 8, 2015 just a few weeks shy of his 66th birthday. He became well known in Huntsville, to locals and visitors alike, as the man who cleared the sidewalks of debris and snow, no matter what the weather. Not everyone knew his name and he spoke to only a trusted few. But he was an unforgettable sight as well-recognized as some of our local landmarks. It was a remarkable achievement for a man that many would have dismissed or ignored under other circumstances.

“For 20 years, Donnie lived right across the street from my store, in the apartment upstairs. Over the years we saw a lot of changes with him,” said Kathy Sheridan, owner of Reflections of Muskoka. “When he first started (sweeping Main Street), kids from the high school would pick on him. He used to get very agitated and go after them with brooms. Through help from (business owners) and his Community Living workers we were able to help him not feel threatened and help him live in the community as opposed to living in a group home.”

The businesses on Main Street watched out for him and coached him to help him learn which behaviours were okay and which ones weren’t. “We had meetings with him. It would be his birthday and we would make boards and he would stand in the back of the room and watch and listen and we would write everything that he did well and things he needed to work on like his patience with kids,” said Sheridan.

“We knew that he was afraid so we made safe stores for him – he knew what stores to go to if he was being picked on. He would come inside my store and wait while I went out to deal with the kids.” Thankfully, in recent years that torment abated. “I think word got around that we watched out for him, and he was able to fit in just like he was part of the family.”

Eagles was part of the downtown community, said Sheridan. She was able to connect with him in a way that many weren’t. “He used to make me a Christmas star every year out of popsicle sticks and yarn. I still have them to this day. And I brought him Christmas dinner.”

It was Sheridan’s idea to commemorate Donnie in some way. “I said, do we have one of his brooms? And Helena (Renwick, of the Downtown Huntsville BIA) came up with the idea having Brenda Wainman Goulet bronze one that he actually swept with.”

She’s happy that he’ll be remembered and is pleased that another Community Living member has been adopted by downtown businesses to carry on the work that Eagles started. “It’s great that we can help them become part of the community. That’s what Community Living is all about – helping them live in the community and fit in.”

I think he really reflected the heart and soul of downtown Huntsville and I love that with this memorial people 100 years from now can walk down the street and see something as quirky as a broom and wonder ‘Why did that go there?’Catherine Cole, owner of The Great Vine

Mandy Davis, owner of Stellabratori Flowers, was eventually able to win Eagles over, too. “It took him well over a year to speak to me. He wouldn’t even take money. He kept sweeping and shovelling our sidewalk but he wouldn’t take anything from me. I don’t think he was a big fan of change. But then he met me at my car every day and said good morning and mentioned the weather. Eventually he even took coffee from me.”

Davis remembers how seriously he took his work. “He did a really good job. He used to get really mad if he saw you outside sweeping or shovelling on your own. We had a street cleanup around Earth Day and Kathy Sheridan and I had to go to him and say ‘we’re having a street clean up, it’s nothing against what you’re doing.’ But he was still mad – that was his gig. He was really awesome.”

It wasn’t just the locals who thought so. “I have customers that aren’t even from town and they ask about him: ‘Where’s the man who used to sweep the sidewalks?’” said Manny Buttus, whose family owns That Little Place By The Lights. “He was just as popular as all the other places or people here. It’s pretty incredible.”

The Buttus family worked to get to know him, too. “He had an incredible memory. One day I was walking around with my kids and after that he would always ask where my kids were. There were times when I was the only one in the restaurant he would talk to. Other times he would see me and he would just walk the other way. But any time I would walk up to the post office or the bank and he would just shoo me back to the restaurant – he would point that way and tell me to go back to work. It got to the point where before he would say anything, I would just say, ‘I know Donnie, I’ve gotta go back to work,’ and he would start laughing.

Others, like The Great Vine owner Catherine Cole, had more subtle communication with Eagles. “He always had a thank you, always a nod, there was always acknowledgement. But he would definitely tell you if you had your car parked on the street too long,” she laughed. “On a sunny day, on a stormy day, he was always out there. I think he really reflected the heart and soul of downtown Huntsville and I love that with this memorial people 100 years from now can walk down the street and see something as quirky as a broom and wonder, ‘Why did that go there?’ What a town that would take a moment to say thank you to a person that made every one of our days better and filled them with a lot of colour. He was a valuable member of this community and it’s great to have him immortalized.” 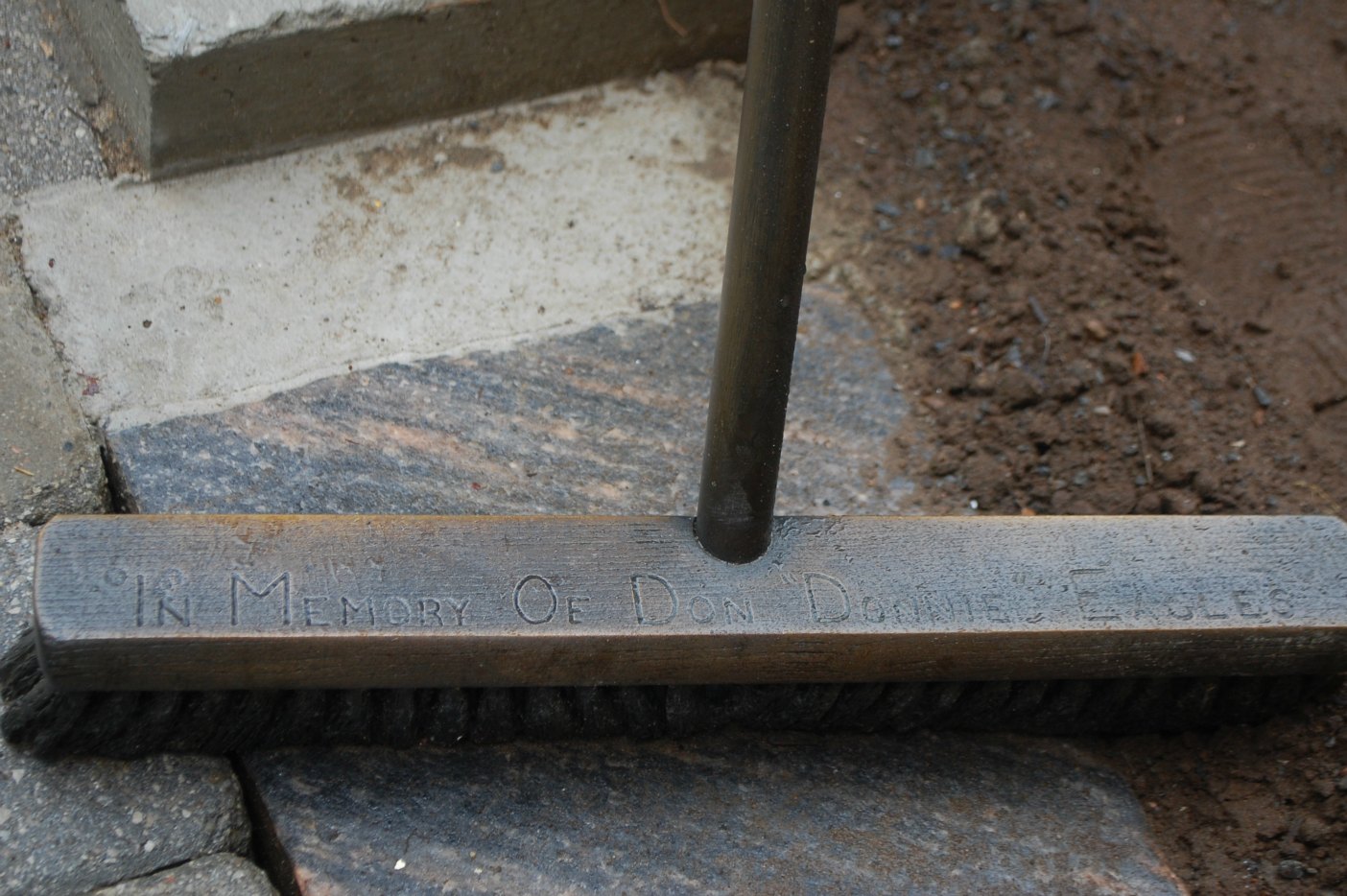 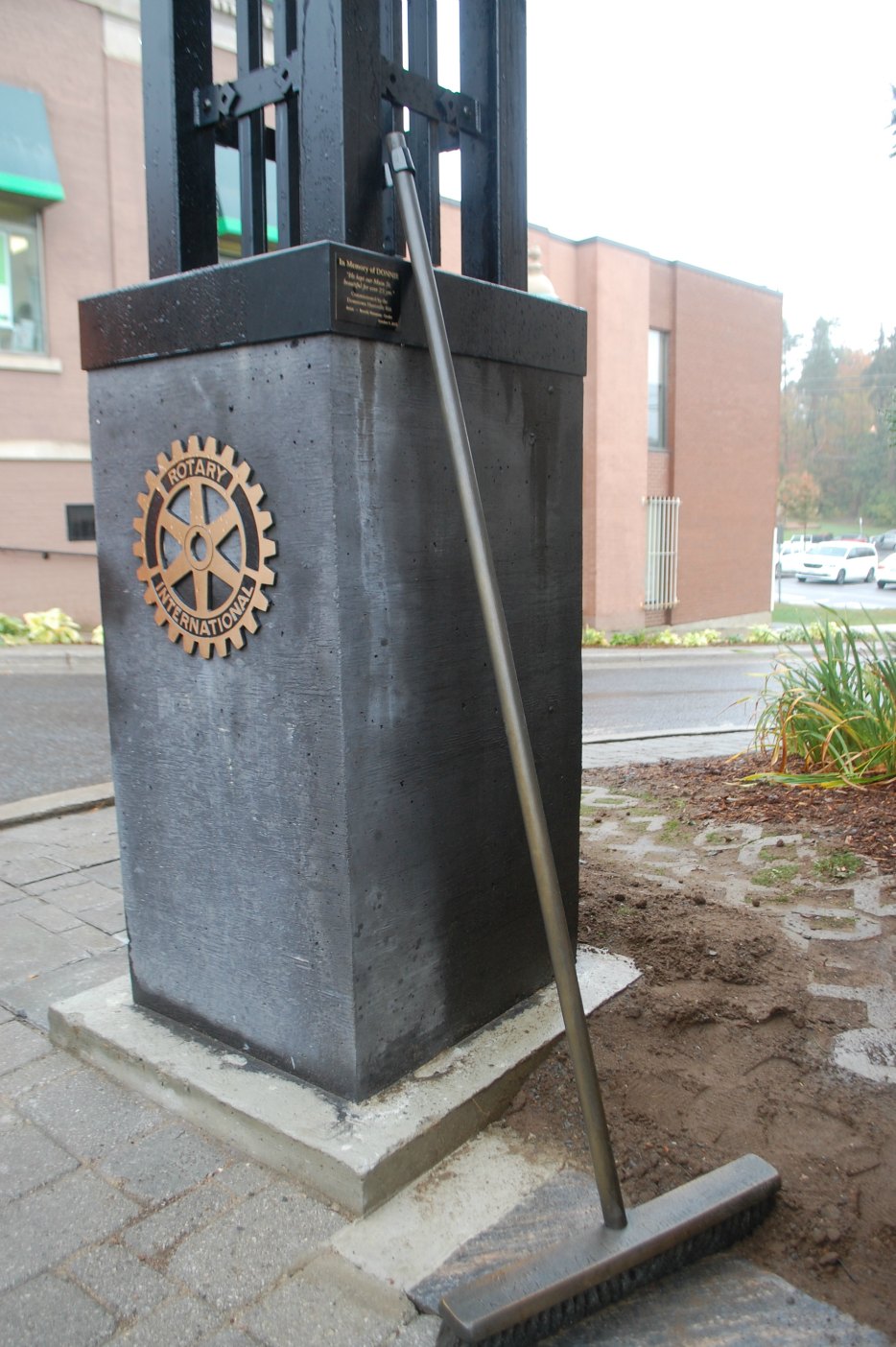 A bronze replica of Donnie Eagles’ broom, created by Brenda Wainman Goulet, rests against the entrance to River Mill Park 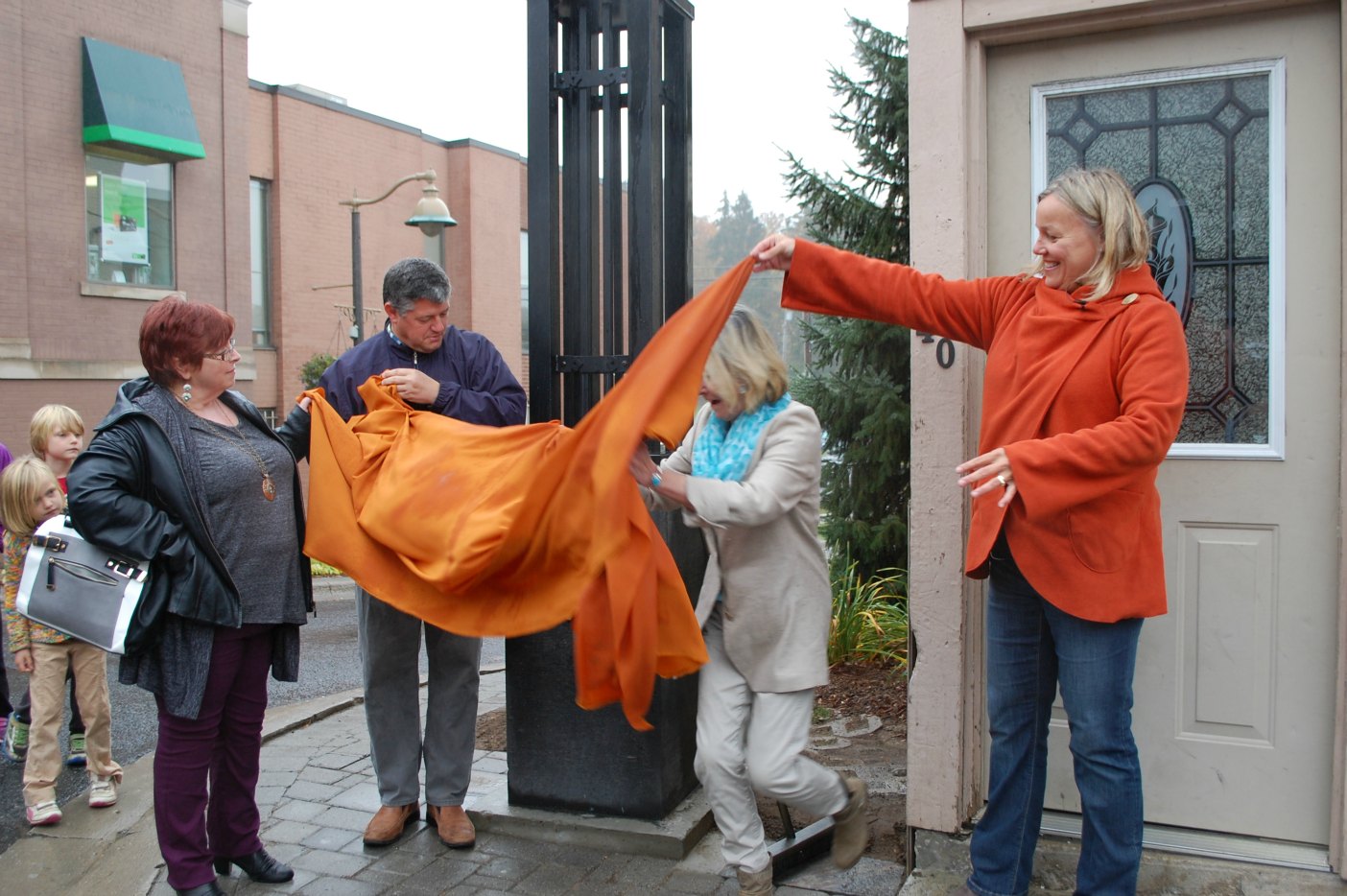 “The merchants of downtown Huntsville really took Donnie in and he became part of our community,” said Renwick. “I think this monument really expresses how they felt about him and how core he really was to the downtown.” But, she added later, “When it was done he would have been fine with it but I think he would have been very upset the day we put this in. There was a lot of commotion going on and he didn’t like things disrupted on the Main Street.” She, too, is pleased to have a lasting memorial to someone who cared so deeply about his part of town.

(Donnie Eagles) was a fixture on our Main Street and a fixture in our lives and I think it’s really special that the people who make up these businesses chose to remember him in a way that is meaningful and very lasting.
Mayor Scott Aitchison

The broom will stand forever in testament to Eagles’ work ethic, his courage in the face of a world that didn’t always understand him, and to the inclusive nature of a business community that did. In the minds of those who knew him, there’s no doubt he was an icon. And he is missed.