You are here: Home / Community / Nate Smith became Instagram famous by sharing his passion for Muskoka

Nate Smith is passionate about the outdoors and loves to share photos of his paddling and snowboarding excursions. People around the world have taken notice.

Nate was born in the King City area and he credits his parents for their decision to move to Muskoka for the outdoor opportunities for their three young children. “We did lots of family camping and our parents fostered a deep appreciation for the outdoors in all of us.”

He grew up in Bracebridge, moving to Huntsville in his early twenties to manage a Surf Paradise Shop. He explains, “I was into skateboarding and snowboarding and I thought that being in a job that surrounded me with equipment that I loved to use was a good fit.”

Asked if he was an athletic child, he smiles, “Not at all! I was more of an outdoor bookworm.” Nate shrugs off the idea of his love of snowboarding and canoeing as having any fitness objectives: “I guess that some level of fitness is a natural by-product of what I do but I don’t do it with fitness in mind. I do it because I enjoy being outdoors so much.”

Nate stayed in town after the board shop closed and he has been a familiar face around Huntsville for the past 15 years, the last four of them as a manager at Algonquin Outfitters. 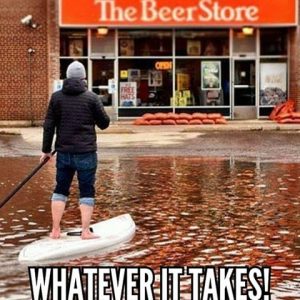 Because of Instagram he’s become recognized around the world. That’s thanks in part to a photo instigated by Nate, who ran to grab a friend and a board when he saw just how much water had flooded the parking lot of the local Beer Store in 2013. The photo was taken by AO colleague, Randy Mitson. The image shows Nate on an SUP (stand up paddleboard) making his way to the Beer Store on the aptly named Beer Lake. The image ended up on the Facebook page of comedian Larry The Cable Guy and got 40,000 likes.

Smith is no one-photo wonder, though. He has almost 3,200 followers on a platform where people average a couple of hundred, but growing his numbers doesn’t appear to matter to this laid-back outdoor enthusiast. His advice to anyone starting out on Instagram is simple: “Worry less about how many ‘likes’ you’ll get and focus more on the experience you’re having as you take the photo.” He adds, “If you take photos of things you are passionate about, it will show.” 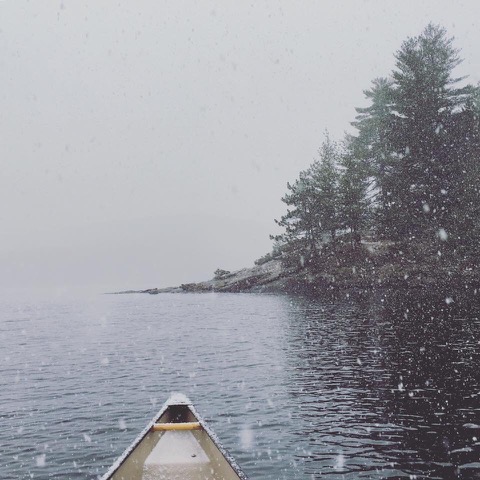 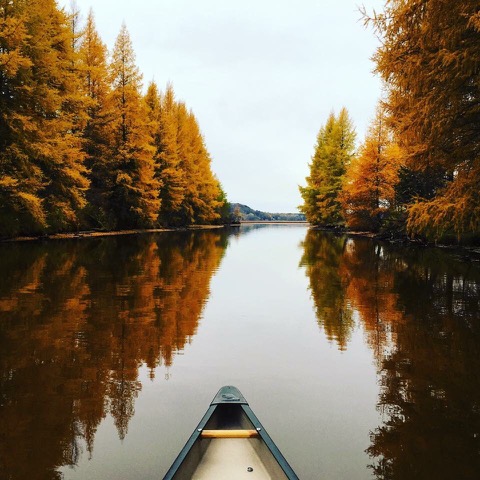 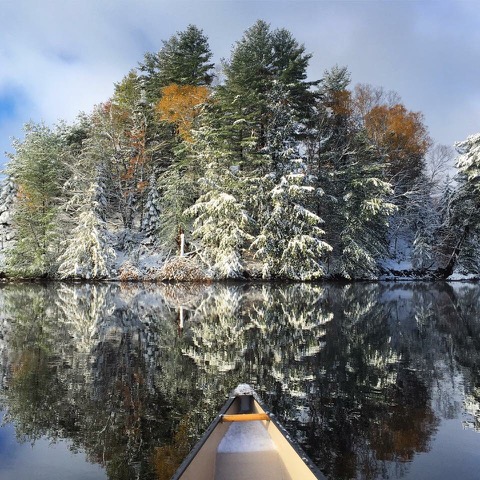 He’s only seriously been into Instagram for about three years and dabbled for a few years before that. He says, “I liked the social aspect of Facebook but not the extraneous stuff that can go along with it and Twitter is limited due to a lack of visuals. Instagram is perfect for me because it’s a great way to share photos and short captions of this beautiful place we live.” He continues, “I feel lucky to live here and I’m proud of it so I love to share the best of Muskoka through my experiences.” He adds, “Instagram can be a very cool community when you can share with others who have the same interests.” 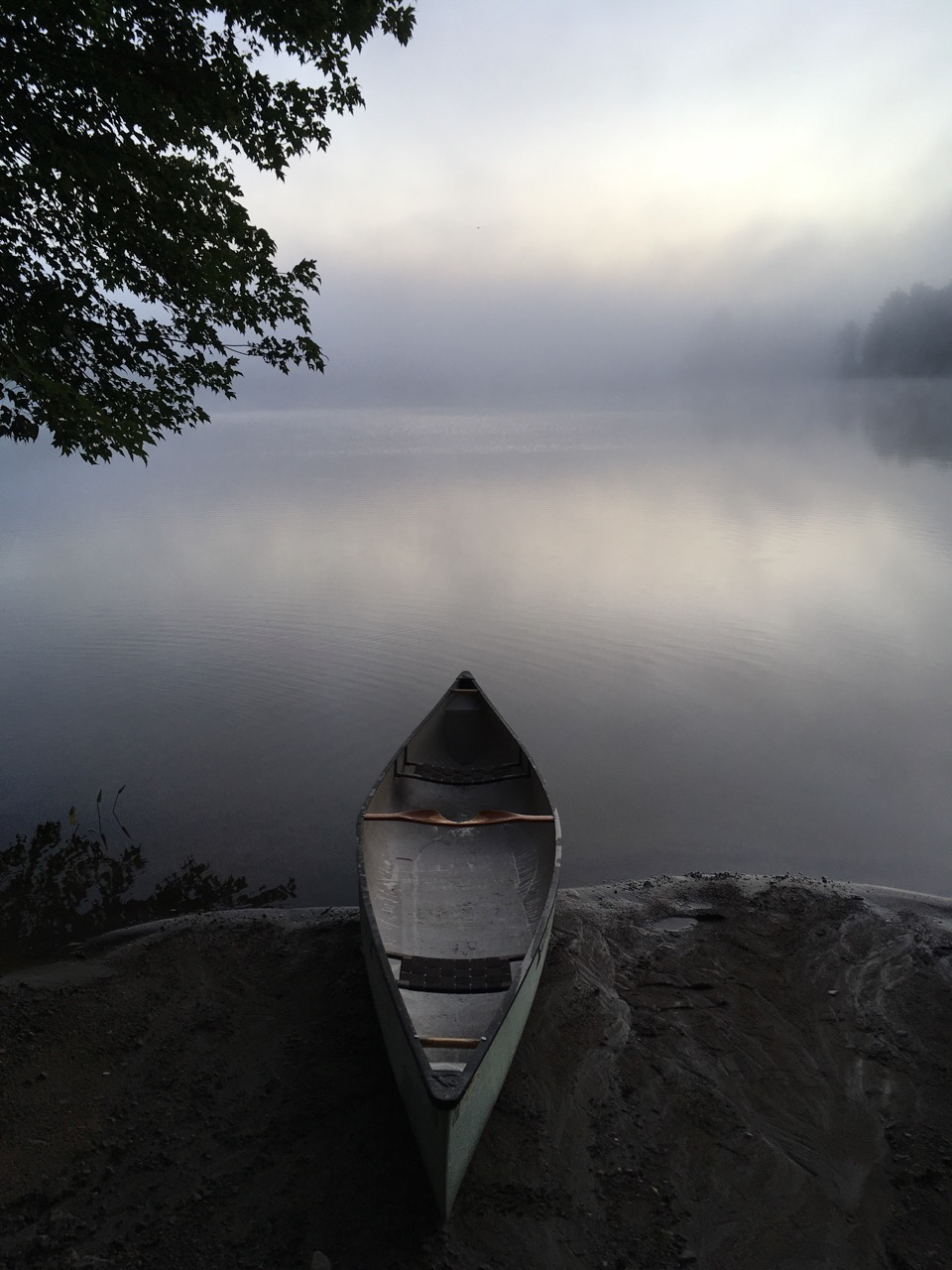 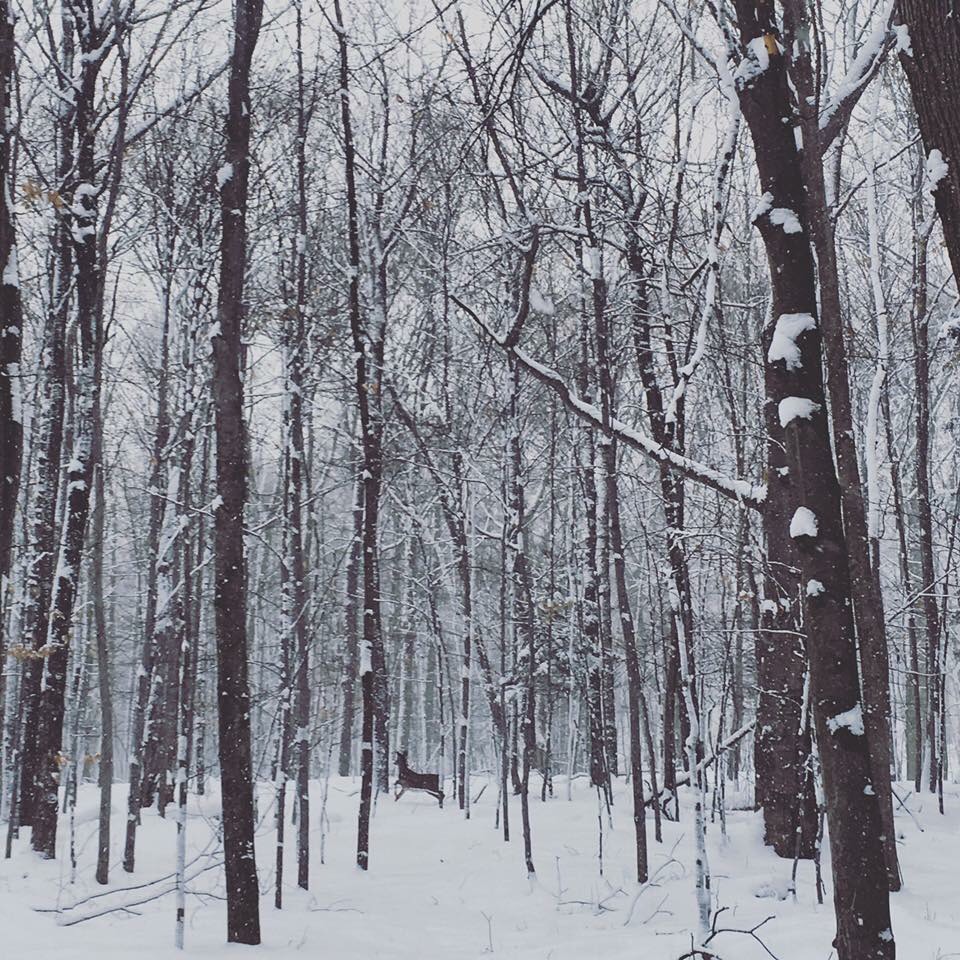 Working at AO supports Smith’s high level of interest in all things outdoors. He pays tribute to owner Rich Swift and senior manager Gord Baker for their leadership by lifestyle. He says, “This isn’t just a job; the lifestyle is part of the job.” He adds, “I’ve met some fantastic people working here – both the staff and the customers. And we all share a passion for the same things.”

One of those passions is sponsored by AO. The Muskoka River X is billed as ‘the longest unsupported, single day paddling race in the world.’ The monster course covers 130 kilometres including 19 portages, a 20 kilometre upriver section, which is done in the dark of night, with a few especially challenging night-time portages thrown in for good measure. And it has to be completed in 24 hours or less. Nate has completed it twice. 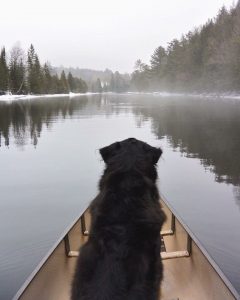 Canoeing is Nate’s favourite summer sport and he extends the season as long as he can. One Instagram post of him canoeing in Buck Lake in November is one of his most popular. It’s no big deal to Nate, who admires those who canoe all through the winter as long as they can find a river with open water.

Nate draws the line at doing his favourite activities in torrential rain or at -40C, in part to spare his dog. Otherwise, ‘bad’ weather is no deterrent to being outdoors. He and his girlfriend Kristine and their dog Moose (part Newfoundland and part Rottweiler) spend as much time outdoors as possible. Moose didn’t even need to be trained to jump up on the SUP with Nate. Like most dogs, he just wants to be with his human.

But along with the lakes and rivers of Muskoka that he documents, Nate also loves to travel. He declares, “I love the ocean, too. I’d return in a heartbeat to Little Corn Island off the coast of Nicaragua.” New Zealand and Alaska are on his bucket list for the future.

“If I have a point to make about Instagram, it would be that I want to share a different side of Muskoka with my followers. I have such a passion for natural Muskoka.” He adds, “All of our heritage matters.”

Nate continues, “So I think that lots is known about our boating heritage and about Muskoka’s reputation as a cottage playground. And that’s all good. We need tourists and seasonal residents. They benefit our economy and they love Muskoka, too. But for me, it’s all about the way that I experience it – the wild side of things. That’s really my Muskoka.”

Luckily for us, Nate Smith plans to keep on sharing ‘his’ Muskoka with the world – one Instagram post at a time. (You can see Nate’s Instagram feed here: @natemuskoka.)