What were you doing April 2-5?

If you were like me, you were in isolation. But for COVID-19, you may have been attending, participating in or volunteering for the Huntsville Festival of Music. On April 2 and 3, participants would have been receiving coaching by qualified adjudicators/teachers. On April 5, we would all have had the pleasure of enjoying the festival’s “Concert of the Stars”.

Spearheaded by Alana Nuedling, Carol Gibson and Kyung-a Lee, and supported by the Huntsville Festival of the Arts, it would have been fashioned after the Kiwanis Festival.

Now my mind is exploding with memories!

In 1953, the first Huntsville and District Music Festival was presented at Huntsville High School, with at least nine subsequent ones to follow annually in the spring, each greater and more exciting than the last. Thanks to the efforts of the Huntsville Music Club, including such members as Allan Miller, Bruce Werry, Dorothy Peacock, Jean Rogers, Muriel Briggs (my mother), Nadine (Ysaye) Mosbaugh, Norma Young, and Wilfred Brown, this festival was always a tremendous success and a musical highlight for participants, families, and teachers.

Participants entered from throughout Muskoka and Parry Sound in a wide variety of categories: piano solos, duets, trios; singing solos, duets, trios, choirs; instrumental solos, and band. It was always a time of great excitement and butterflies in the stomach—to perform in front of a large audience and to receive adjudication by such talented musicians and educators as Boris Berlin, John Dewdney, G. Roy Fenwick, Richard Johnston, Charles Peaker and Eldon Brethour, all in good-natured competition. On a special evening to follow, many participants were privileged to perform at the “Stars of the Festival” concert, some to receive scholarship awards from generous donors.

All this reminds me of some of the stellar teachers in our own town.

Mr. Bruce Werry was the first vocal teacher I remember. He visited all the classrooms at Huntsville Public School. He entered my friend Susan Kellock and me in the festival when we were in grade one, something we did every year from grade one until grade eight as I remember. We were coached by the finest!  We had so much fun practising together, each day on the way to and from school, taking turns singing the soprano and alto part.

Mr. Wilfred Brown entered the scene in the middle grades. My most vivid memory was of him, in his very soft-spoken gentle and humorous way, coaching his daughter Sandra, Susan Kellock, and me in singing trios. We received some top-notch adjudication from Mr. Eldon Brethour, a well-known music educator in Toronto. 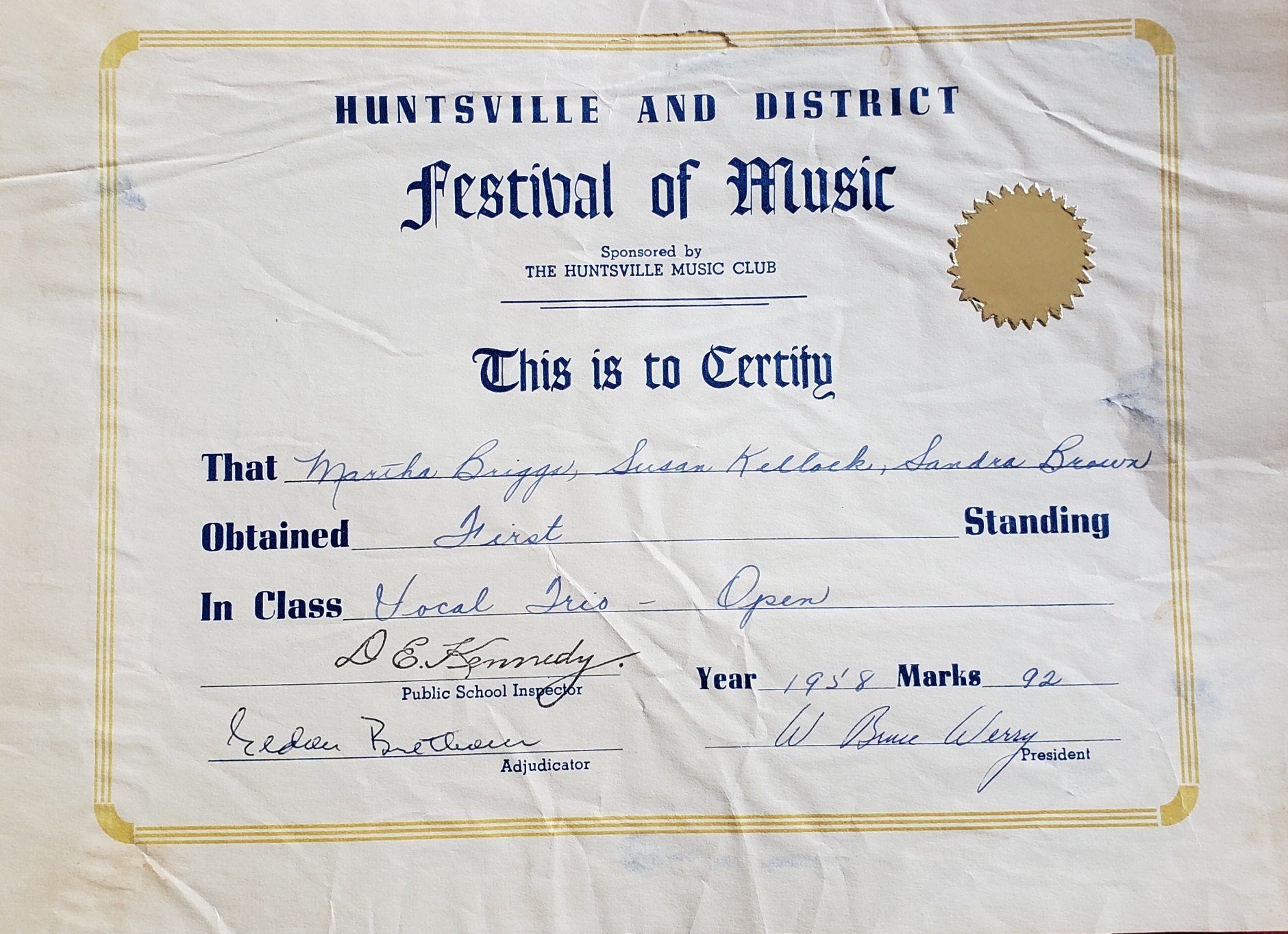 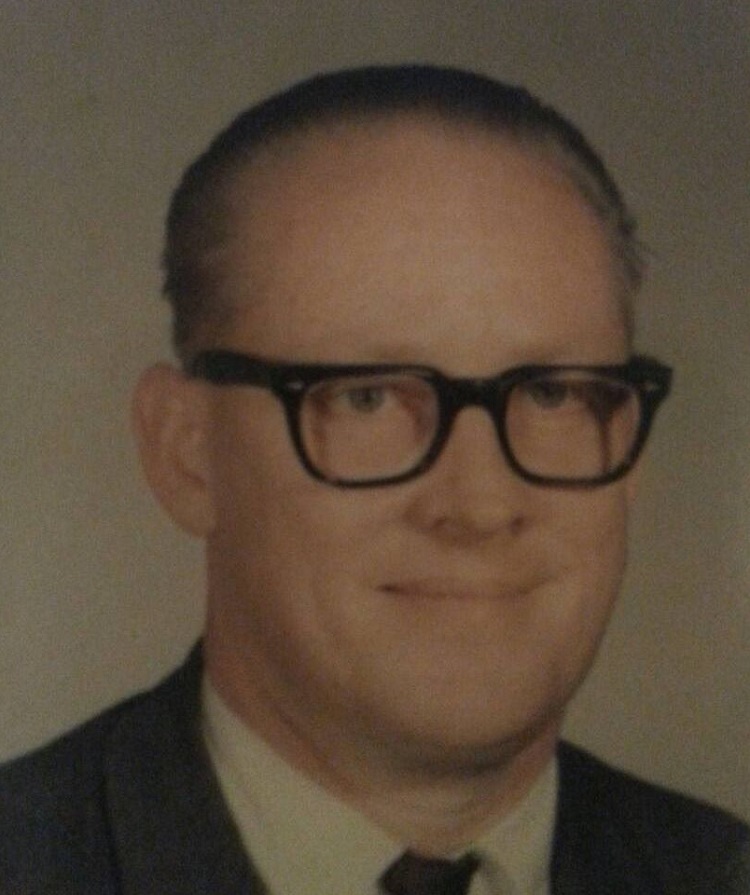 (Above left) Martha Briggs, Susan Kellock and Sandra Brown received a mark of 92 and first place for Vocal Trio – Open at the 1958 Huntsville and District Music Festival. “Eldon Brethour, the adjudicator, was an esteemed educator in Toronto…so this mark is remarkable, if I do say so,” says Martha Briggs Watson. “Mr. Brown (above right) was our wonderful teacher.”

Mr. Charles Garcia was our music teacher in grades seven and eight. By then, there was a separate classroom for music in the basement of Huntsville Public School. (The very room where many of us had spent our kindergarten year). Incidentally, he was married to a sister of Carl Tapscott, tenor, arranger, organist, founder of the vocal group the Commodores and later the Carl Tapscott Singers. Mr. Garcia introduced us to various kinds of music. He even had an artist come into our classroom to paint a picture inspired by a vinyl recording of an excerpt from Tchaikovsky’s Swan Lake. Lo and behold, the resulting painting was a swan on a lake! We were gobsmacked!  Later on, we wondered if the artist actually knew the piece was from Swan Lake beforehand. As it turns out, that artist was Hugo Ohlms, known worldwide as a muralist.  Mr. Garcia also taught us vocal music as well as the recorder. No doubt that caused him some hearing loss!

Bruce Werry became our high school music teacher. He coached us on individual instruments as well as directing the Huntsville High School Band for performances in the festival. He also took our band to the Kiwanis Music Festival in Toronto each year, as well as on band exchanges with schools in Toronto and one with a school in Rochester, where we were billeted with members of the band exchange, and they with us. We were always very proud to show off Huntsville in the winter, such a different experience for city kids. It was a terrific bonding experience, and some of us kept in touch with each other for years later.

We were also a marching band. In the spring and fall, Mr. Werry would take us out at lunchtime to march around the Lookout hill (the road went all the way around then). Some of us chipped a tooth, caused by potholes as we marched, but we cared not! We just loved to march…lots of Sousa as well as Colonel Bogey!

But…it was piano that was the main focus for me.

My first piano teacher was Noreen Spencer, who later married Phil Nimmons, renowned clarinetist, composer, arranger and educator and bandleader of the jazz band Nimmons ‘n’ Nine. Noreen was a high school student at the time and I was a four-year-old who was desperate to take piano lessons like my older sister. No other music teacher would take me on, as they said I was too young. I loved Noreen. She was as beautiful as she was talented.

When I was deemed old enough, I had the good fortune to have as my piano teacher, Mr. Fred Wigglesworth, a jolly, good-natured gentleman, who taught with great joy and aplomb. If I was learning to play a minuet, he would teach me to dance the minuet; if it was a waltz…the same, and so on. A huge bonus was that while he was doing this, his wife was in the kitchen preparing fudge for all of his students. Every week each of us left with a piece of fudge and a nickel! Mr. Wigglesworth was a delight. 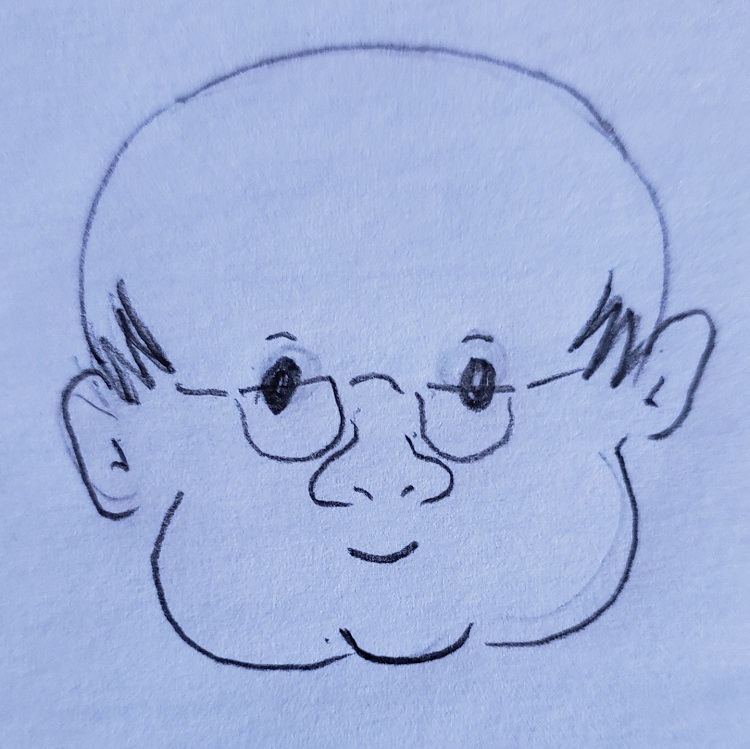 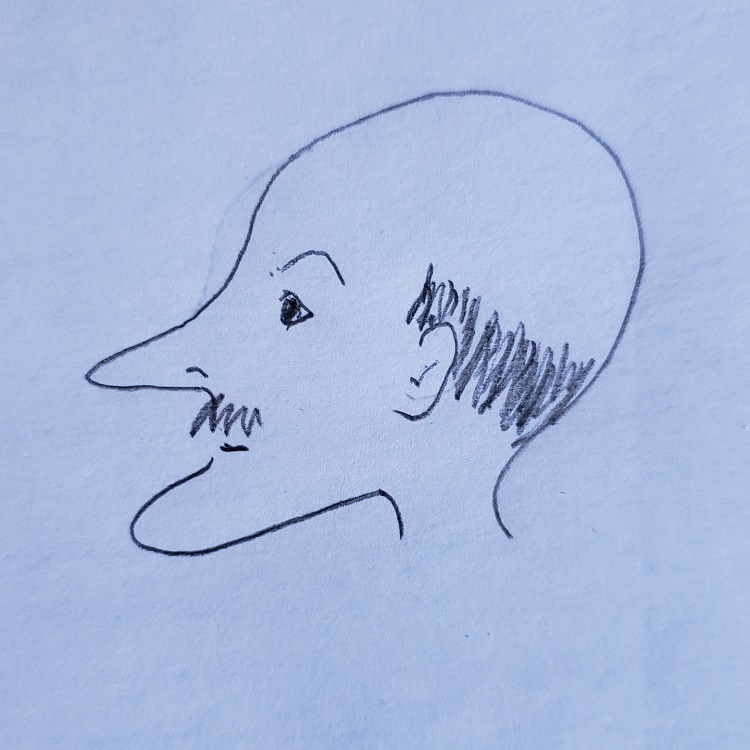 Caricatures of Fred Wigglesworth (above left) and Charles Garcia (above right), created by then-schoolgirl Martha Briggs

Sadly for me, there came a time when he needed to retire. He had also been organist at Trinity United Church for a very long time, and while there, he had “discovered” the voice of young James Milligan, the minister’s son. James continued his vocal studies to become one of the most accomplished baritones in the world. It was during a rehearsal for an opera in Basel, Switzerland, that he collapsed from a heart attack and died, at the young age of thirty-three. Such a loss for the world of opera.

Thankfully, Mrs. Nadine Mosbaugh agreed to take me on to continue. Nadine was the granddaughter of the famous Belgian composer/violinist Eugene Ysaye. She became a concert pianist, touring with the great pianist Jose Iturbi in Europe before coming to Canada. She also hosted and performed on a classical radio program on CKAR radio in Huntsville.

I remember my first lesson with Nadine like it was yesterday. I was in tears for the whole lesson, just overcome with gratitude that I was studying with the amazing Nadine Ysaye Mosbaugh! This she couldn’t understand, and kept questioning me: “Why are you crrrrrying?” (Her rolling “r”!)  Weekly lessons with her were the highlights of my life. She was so very feisty, joyous, kind and demanding all at once. I loved to sneak in early to try to catch her playing before my lesson was to begin. I could always tell her mood by the piece she was playing—one time her angry piece, another time a quiet lullaby. I was so very sad, but so very happy for her that she had the opportunity to move to Barbados. I will forever feel gratitude that I had the privilege of studying under incredible tutelage.

Mrs. Norma Young was another wonderful piano teacher. I knew her by her son and daughters, and her pupils at the festivals. I was always an admirer of hers. She was a great supporter of music in Huntsville and was a member of the Huntsville Music Club, contributing a great deal to music in our town.

Mrs. Isabella Conway, who acquired her piano teaching certificate from the Toronto Royal Conservatory of Music, was another piano teacher of note. Several of my friends studied with her. Her son Doug reminded me that it was she who invited Marcus Adeney, a cellist with the Toronto Symphony Orchestra, and his string quartet from Toronto to perform here.

The annual music festival was a time when so many of us could come together to participate and enjoy the camaraderie that brought us together through music.

I know there was at least one other music festival in Huntsville after I had left in 1963. One was the Muskoka Music Festival undertaken by Mr. Kenneth McDowell. Were there others?

Clearly, Huntsville has a very rich musical history, from at least the early 1900s with the formation of the famous Anglo Canadian Leather Company Band to this day. And I look forward to next year’s Huntsville Festival of Music.

I am indebted to my dear friend, Susan Kellock, who filled in some details I couldn’t remember, and verified others. Thank you, Susan!