You are here: Home / Commentary / Listen Up! Beyond spring floods, Muskoka’s water level policy needs a review: a guest post by Ted Johnson

Thank you to Hugh Mackenzie and to Doppler for inviting me to contribute an article.

As we roll into April, even during the current health crisis, the minds of many of us turn to the spring breakup and runoff. Are we headed for another major flood like the one we experienced last April and May, or is this year’s freshet more likely to be ‘normal’?

The short answer is, it’s too soon to tell. 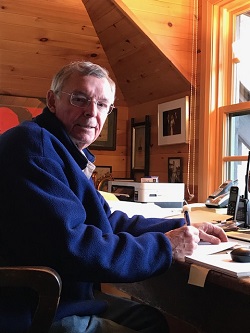 There are a couple of good omens: the moisture saturation level of the snowpack is only slightly above normal (compared with 150 percent of normal at this time last year), and a good part of the winter’s accumulation of snow in Muskoka has melted or evaporated.

Last year the snowpack saturation level climbed to an extraordinary 250 percent by April 21, fueled by two heavy rains. This was followed by an unusual warm spell triggering a rapid melt. A perfect storm. Despite the efforts of the Ministry of Natural Resources and Forestry (the ‘MNRF’) to draw our rivers and lakes down to record low levels, the runoff far exceeded the capacity of the drainage system to handle it, and the Muskoka River reverted to what it had been for ten thousand years before the first dam was built—a ‘wild river’. Many of our lakes rose by over five feet from their drawdown lows, and flood waters reached well into downtown Huntsville.

We should have a much better sense of the flooding outlook this year by April 15.

But having experienced two ‘floods of the century’ in six years, it’s becoming clear to climate experts that dramatic spring runoff is the new normal. Trends suggest more 24-hour periods in January and February where the temperature does not dip below freezing. This means less ice cover and more open water in Georgian Bay to be picked up by the prevailing westerly wind and deposited as rain into the snow cover of Muskoka and Algonquin Park. So, we can expect higher saturation levels of the snowpack and greater runoff in spring.

Leaving spring flooding aside, what about water levels during the rest of the year? The MNRF manages our watershed. They operate some 29 dams and controls in an area roughly the size of Prince Edward Island, under the Muskoka River Water Management Plan (MRWMP). Huntsville is on the north branch of the Muskoka River, and our water levels are controlled primarily by dams above Lake Vernon, below Fairy Lake at the locks, and at Port Sydney. Most of the shoreline on the river and most of the lakes on the north branch is “soft”. Beaches, earthen banks, and the like. It is very vulnerable to erosion.

For over sixty years we had ‘water levels peace’, with practices governed by the Hackner-Holden Agreement of 1940. Beaches were substantial and shorelines pretty stable. Waterfront owners could enjoy their docks from May 24 to Thanksgiving. But the introduction of the Muskoka River Water Management Plan by the MNRF in 2006 changed all that. The plan called for higher water from June to mid-August annually, and lower water from then to late fall.

Anyone who has boated the stretch of the Muskoka River from the Brunel locks down to Mary Lake in the past couple of years will have seen the magnificent white pine tree that is now leaning precariously over the river. This forest king stood tall on the east bank for the better part of a hundred years until the softening of the bank and erosion under the MRWMP of 2006 began the inexorable process of toppling it. Hundreds of other lesser trees along that stretch of the river are suffering the same fate.

Many waterfront owners on the river and our lakes have seen their beaches diminished and shorelines ravaged by erosion. Some complain that their docks are under water well into June. The natural lakefront and riverfront environment which draws so many of us to this area is being diminished. The environmental case for a review of the MRWMP is strong.

In addition to the environmental case, there’s also a powerful economic case for a review of the MRWMP. The Huntsville and Port Sydney dams (and many others in Muskoka) were built around 1870 to serve the lumber industry. Lumbering was becoming a major driver of the Muskoka economy and water level control policy was designed to serve it. Today, the overwhelming economic benefit derived from our lakes and rivers is the economic activity around their use and enjoyment by permanent and seasonal residents. One might think it obvious that in Muskoka of all places we should be working overtime to avoid policies that might diminish that precious—and precarious—natural environment.

And of course the environmental and economic cases for review of the plan are augmented by the climate change case. The history of the last couple of decades, together with very disturbing climate forecasts, make a very compelling case to reopen the plan.

It’s important to understand that local MNRF staff who implement the MRWMP are good people who care about the environment. They are accessible and helpful. But they’ve been tasked by “head office” with administering a problematic plan.

The 2006 MRWMP was devised by an earlier provincial government that was determined to develop green energy, sometimes at great cost. Revised water levels might better serve hydro power stations on both the north and south branches of the Muskoka River. There is indeed evidence that that was the primary policy reason behind the 2006 plan.

Green energy is good. And in this era of climate change induced by human activity, we need more green energy. But must we trade off our natural environment—soft shorelines, fragile wetlands—and continue to turn cottage country into a power reservoir? There’s no evidence that we need to do that. Indeed, there’s a good case that hydro-electric power generation and respect for our natural shorelines can coexist. It’s just that power generation should not trump our environmental concerns.

There has been no meaningful public review of the MRWMP.  An earlier provincial government promised to conduct a consultative review of the plan in 2016. No such review took place.

In August of last year, the Ontario Ministry of the Environment, Conservation, and Parks (interestingly, not the MNRF) established the Muskoka Watershed Advisory Group—a panel of nine volunteers chaired by the very able Mardi Witzel—whose mandate includes identifying “priority issues” in connection with the Muskoka Watershed. The group heard submissions in November in Port Carling from a number of interested parties and concerned lake associations, many of them calling for a review of the MRWMP. The advisory group’s report is expected in May.

It may be that their report will be the thin thread by which a review of the flawed 2006 Muskoka River Water Management Plan, and a return to a plan more in keeping with the needs of our precious waterfront environment, hangs.

Following a career in government and in business, Ted Johnson has retired to his Port Sydney home where he and his family make maple syrup and enjoy the outdoors. He is a director of the Mary Lake Association.