The Huntsville Jr C Otters, with a roster of both returning and new faces, got a fan-pleasing start to the season with two wins right out of the gate.

“Brent (Tomlinson) and I worked throughout the summer to recruit players and have added more skill, depth and speed,” said co-coach Marc Gagnon.

The team’s home opener against the Penetang Kings on Friday, September 14 had a new puck drop time of 7:30 p.m. to allow families more time to join in on the fun. Those who did weren’t disappointed.

After a ceremonial puck drop with Mayor Scott Aitchison, the first period was more like a warm up that ended with no goals scored. But from then on, the Otters set the tone, sending the puck past the Penetang goal tender and using power plays to their advantage.

“We got off to a bit of a slow start, but that’s understandable given the circumstances as many players were playing their first Junior C game and experiencing their first home opener,” said co-coach Brent Tomlinson. “With that said, we felt that when we got into the third period, we finally started playing the high-pace hockey we expect from this group.”

The team set up plays and controlled the puck throughout the game, earning seven goals to Penetang’s three. “Our power play, which struggled at times last year, was running on all cylinders this night and finished with a 3/5,” said Tomlinson.

Ty Sparling was great in net and Bo Peltier capped off the home opener with an astonishing six points in his first game of the season. 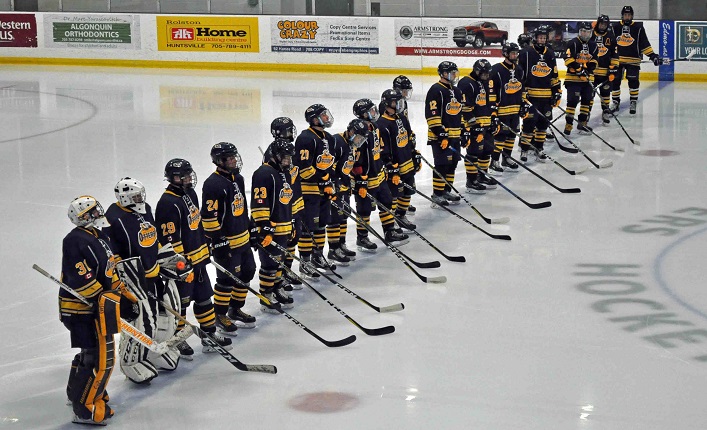 On Saturday, September 15, the Otters met the Midland Flyers on their home turf for a tough game, both mentally and physically. The team had to battle through the referees’ calls all night and had to kill penalty after penalty in the first two periods.

But the team persevered. “When the third period came, we were able to play 5-on-5 hockey where again we showed that at even strength we’re a tough team to play against, and we were able to pull away from Midland,” said Tomlinson.

The Otters took their second win of the season in as many nights, with the scoreboard showing 6-3 over Midland.

“We understand that we started 0-9 last season and still finished strong,” said Tomlinson, “so the key is to always be going in the right direction no matter how you start, there’s always room for improvement.”

Gagnon reflected on the weekend overall: “We’re very happy and proud of the start and development of this year’s team and we could feel the energy from the great crowd at the home opener on Friday night.”

The Otters next home game is Sunday, September 23rd at 2:30 p.m against the Mount Forest Patriots – come check out this year’s team and cheer them on!