The ice is out, so bring on lacrosse!

Many players tried out for the Hawks on two full weekends in early April. Huntsville is the only northern town that plays in a Junior C lacrosse league and many players are from out of town, here to commit themselves to a sport they love. They come from as far as Sault St. Marie, Sudbury and North Bay just to try out.

With full days of skills training and game play, the players appreciated the hearty meals provided by the local community—the Algonquin Café and Deli supplied the lunch for the first weekend with the Bears Den donating the lunch at the second weekend tryout.

The team has 11 returning players in their fourth and fifth years, and will have approximately nine rookies officially joining the team once the roster is finalized—young fresh players eager to play hard!

Hawks staff ramped up the excitement for the coming season at their first practice on April 29 with the unveiling of a revamped team dressing room. An exuberant new paint job was complemented by new signs on the walls highlighting previous award winners and a new ‘core covenant’ with the new Hawks logo. The boys were ecstatic and called the room “sweet” when they saw it. They loved their new jerseys with a redesigned logo and rebranding. To celebrate, the boys enjoyed a Hawks cake together while checking out the new looks for their dressing room and jerseys. 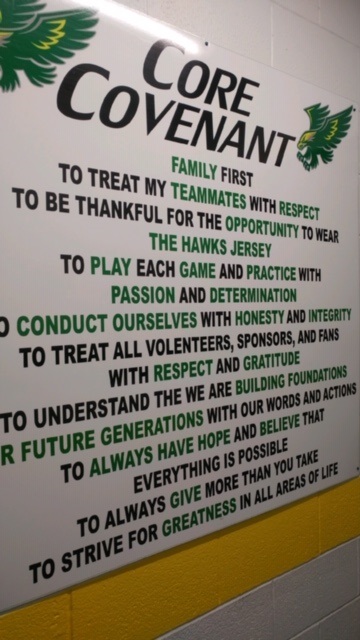 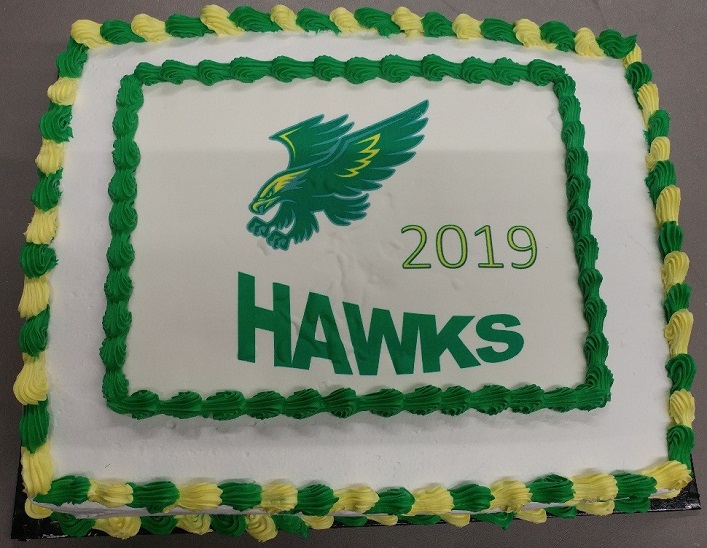 The community will be able to see the Hawks in their new home jerseys at the 2019 double-game home season opener this weekend.

Saturday’s game (8 p.m. on the Jack against Cornwall) will honour the memory of former Hawks player, #6 Quinton Groomes. Players will display a #6 sticker on their helmets for the game. Following a moment of silence, Quin’s childhood friend, Jake Earl, with whom he would practice lacrosse in their back yards, will start the game with a ceremonial face-off above the Hawks crest at centre floor. Jersey #6 will be hung in the arena for the 2019 season in remembrance of Quinton Groomes’ time as a Hawk.

Donations will be gathered in Quin’s memory for the Muskoka Community Foundation’s Muskoka Youth Mental Health & Wellness Fund. Donations can also be made online here. Funds raised will support mental health and wellness programs and services for youth in Muskoka, and will help youth in Muskoka understand that they are not alone. Quin’s family appreciates everyone who has supported them and thanks everyone for their donations to such an important cause.

The ball drop for Sunday’s game against Nepean will be at 2 p.m. in the Jack Bionda Arena.