Huntsville’s train station was once a bustling hub. Can you guess the year this photo was taken?

Last week we shared this photo of the old Empire Hotel with you. (Photo from the 1980s by Dr. N.E. Hunt, courtesy of Muskoka Digital Archives) 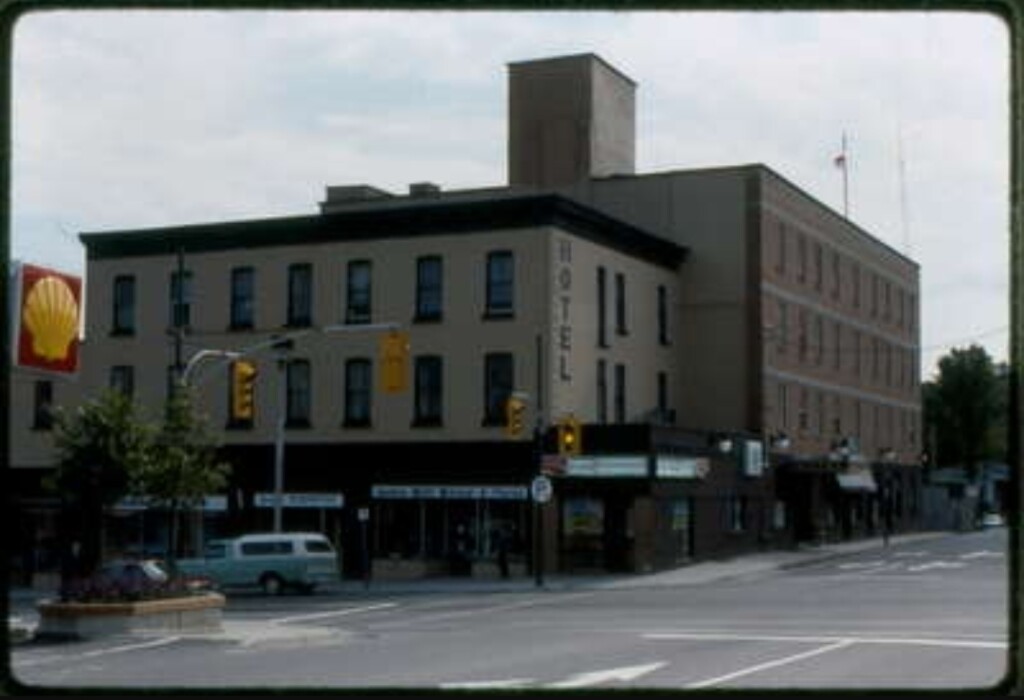 The Empire Hotel, long a landmark at the corner of Main and Centre, burned down in 2009, but it lives on in the stories and memories of the people who loved it.

We asked readers to share a memory or two about the old Empire Hotel. Here’s what some of them said:

Richard Corcelli: “In June 1964, my wife Maryellen and I spent our honeymoon at Limberlost Lodge, north-east of Huntsville. The sunny days were fun filled with swimming, canoeing, horse back trail riding and enjoying the natural beauty of Muskoka. The evenings, [not to mention the late, late nights, ahem!!], were very quiet unless one entered a Parcheesi or Crokinole tournament.
Our haven was the cellar lounge at the Empire Hotel in Huntsville where one could enjoy a summery beverage and watch the unfolding circus of cronies and habitués of the Empire Hotel.
We chuckled our way home to our cosy Limberlost cottage on Solitaire Lake.
Who knew that in 10 years we would move to Muskoka? We are in our 45th year as full time residents of Gravenhurst,….and it all started at the Empire Hotel.
Now if only we could go shopping at our favourite Eaton’s store on the main street of Huntsville, just a block from the Empire.

Harvey Forde: “Back in the 30’s I remember how busy the Empire Hotel was on Saturday night. It was a meeting place for the week, payday and grocery shopping. The bar was busy. I helped another boy in 1939 deliver the Toronto Star. Usually on Saturdays we had extra papers and we would go into the bar at the hotel and always sold the extras. From the condition of many of the patrons they would have difficulty reading the paper, but we got the five cents a paper.”

Andy Hanna: “Spent the evening of the first game in the 1972 Canada-Russia hockey series in the hotel bar (no TV yet at Lake of Bays cottage). Canada lost.”

Patricia Williams: “There was a bar in the basement fondly referred to as The Snakepit, which I worked in from 1974-1986 on and off part time. Never seen anything like it. Lots of bar fights, but no guns or knives like you hear of today not any major injuries, it was a time when good old boys went out on a Saturday night to fight. A different era or sure. People bringing monkeys in to drink in the bar, a man rode his horse into the bar, a man rode his motorcycle into the bar, never a dull moment. Not to mention many colorful eccentric people. Loved the place.”

Eric Seely: “David Wilcox, FM & Nash the Slash in concert at the Empire was a hoot. Great old place.”

Marjorie Wickman: “I remember those days Had my first beer in the keg room the bar upstairs age 15 on a dare told if I could get served they would buy me steak dinner We didn’t have steak dinners back then at home that was for very special occasions when you got to go to a restaurant.”