There were more than 650 student athletes competing for top finishes in the province. The athletes, their coaches, and supporters travelled here from more than 90 different high schools across Ontario, and as far away as Red Lake and Fort Frances.

The athletes got a sunny day, with -15ºC temperatures providing true Nordic ski conditions for the culminating event of Huntsville High School’s Nordic team season. The parking lots were filled to capacity for the event while the local and visiting crowds rang their cowbells and cheered loudly.

The racecourse highlighted some of Arrowhead’s popular cross-country ski trails, including Lumby and Arrowhead Lake, with their challenging hills and sharp cornering. For HHS Senior Nordic athlete Madeline Horton, her fifth OFSAA competition was the first time on home turf. “It was amazing to have the OFSAA championships in Huntsville this year. We all found it so exciting to get to race on the trails we’ve been skiing and training on for years, and to have so many people we know show up to cheer us on.”

The staging area—with the start line next to the pavilion and the finish line alongside the visitor centre—showcased Arrowhead’s relatively new structures, which were unveiled last season. Athletes and parents in the crowds were heard commenting on Huntsville’s wonderful facilities, as well as the race event layout and exemplary organization by convenor and HHS Nordic head coach John Cowan.

In the Special Olympics category, Mark Cheek received a gold medal for his first-place finish. 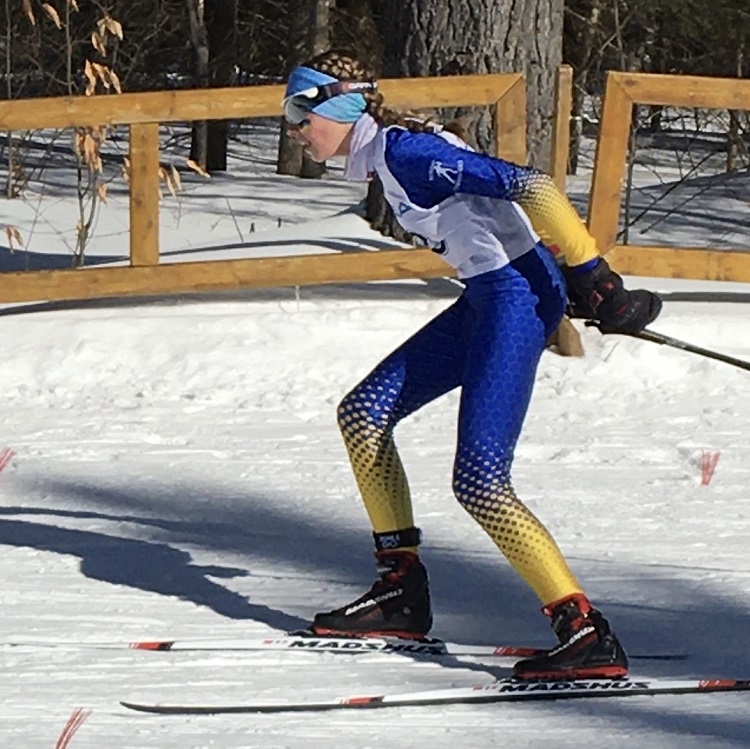 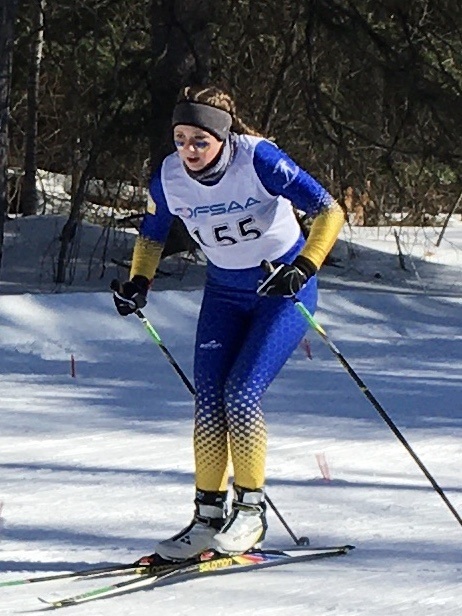 Mya Marshall (above left) and Dale Graham power through to silver-medal finishes in their respective categories at the 2020 OFSAA Nordic ski championships. (Brenda Liddle)

In the Junior Boys high school-trained category, Sam Richter took home a gold medal for his first place finish, followed by Matthew Kuusk in fourth place, and Ben Shearing in tenth out of 153 competitors.

The team sprint relay races, planned for Friday, Feb. 21 on the streets of downtown Huntsville, as well as the Thursday evening event banquet at Deerhurst Resort, were cancelled due to the province-wide teachers’ strike. Parents and athletes expressed disappointment about the recent cancellation, but took it all in stride.

“It was great to see the race come together so well, despite last minute changes,” said Andrea Smith, a parent of one of the HHS athletes. “I know skiers were disappointed not to have the relays downtown, but their hard work really shone through today.”

Allison Myers, HHS Nordic coach, summed it up: “OFSAA is about the culmination of almost 700 athletes who have worked hard during the season to race. It is also about representing your school and sport. We’re so proud of all the athletes who were ambassadors for Nordic skiing, with so many examples of sportsmanship, team cheer, and huge personal efforts on the course.”

Full results from the 2020 OFSAA Nordic ski championships can be found here.