You are here: Home / Commentary / How the election results would change under Proportional Representation ~ Patrick Flanagan

Remember the Liberals’ 2015 promise to do away with the first-past-the-post electoral system? Do you wonder why that never happened? The latest election results might provide a clue.

Using data from the Elections Canada website, which is still unofficial, here is the distribution of seats based on the current system (Actual) and on the simple PR model (Proportional). 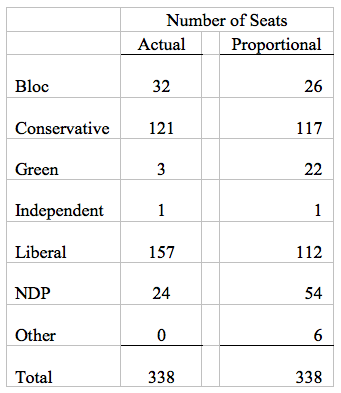 A switch to PR would hurt the Bloc and the Conservatives to a modest degree, but would hammer the Liberals. On the other hand, such a switch would be a huge benefit to the parties that have been pushing for a change – the NDP and the Greens – and would give a few seats to the fringe parties that generally are shut out by first-past-the-post. This assumes, of course, that people would have voted the same way under PR as they did under our current system, and that might not be the case.

A government needs 170 votes to get measures through the House, so it will be a challenge for the Liberals to keep a hold on power under the current system. If the seats were allocated by PR, the challenge would be much greater.

So why do the two biggest parties cling to first-past-the-post? Because it favours them. In the simple PR model, the Conservatives would have the most seats but would have difficulty finding common ground with other parties to get the necessary 170 votes. Same for the Liberals. And if the Liberals realize that a switch to PR would cut their number of seats, why would they bring that problem upon themselves?

Patrick Flanagan is a retired actuary, currently enjoying life in the Huntsville area.