You are here: Home / News / Dr. Gardner encourages people to get tested if they have any symptoms of COVID-19

Although the COVID-19 curve has flattened in Simcoe Muskoka, and indeed across the province, it has not yet started to decline and community transmission is still occurring.

“People need to be aware that there is still community transmission happening, there are still asymptomatic cases that can lead to transmission to others,” said Dr. Charles Gardner, Simcoe Muskoka District Health Unit (SMDHU) medical officer of health.

In a media briefing on May 4, he reminded people to continue to practise physical distancing, keeping a two-metre setback from other people and avoiding crowds, and to practise frequent handwashing.

And those who develop any symptoms need to go into self-isolation and contact an assessment centre for advice and testing. “Certainly I encourage people to get tested. It’s much better if you know your status,” said Dr. Gardner. “We do follow up with all laboratory-confirmed cases for assessment, for support to be into self-isolation, for follow-up with the contacts of those individuals to put them into self-isolation to help flatten the curve and prevent further transmission.”

Symptoms of COVID-19 include cough, fever, and difficulty breathing.

The majority of cases in Simcoe Muskoka are now the result of community transmission, meaning the virus is spreading from person to person and is not linked to travel or a previously known case. It’s not just those with symptoms who are infectious—people who have been infected but aren’t yet showing symptoms, as well as people who are infected but don’t exhibit any symptoms, can transmit the disease to others. 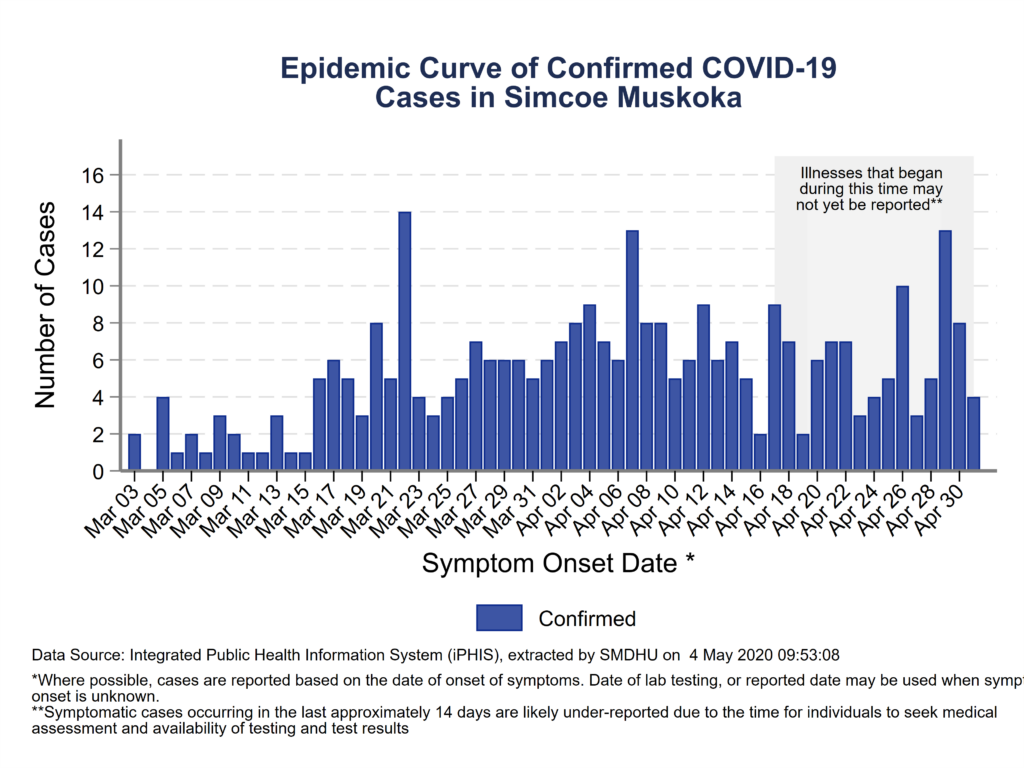 Dr. Gardner has emphasized in the past that case counts are generally just the tip of the iceberg, with more undiscovered cases in the community.

That number doesn’t provide a full picture of testing in the region—the health unit is required by law to receive all reports of positive cases, but it does not receive notice of all negative tests from some locations.

Dr. Gardner said that it’s unknown why the rate of testing is so much lower in Muskoka. “It may be that they actually have a lower incidence in transmission in their community, it’s that much farther north. There’s definitely a gradient when I look at the map of the province about the per capita incidence of this disease—it’s higher the farther south you go towards the urban centres like Toronto and the GTA.” On a per capita basis, Simcoe Muskoka has about one-third the incidence of COVID-19 cases compared to the GTA municipalities, he added. “I do know that they are providing access to actual testing so I don’t think it’s a matter of people not being able to get it done.”

According to an update sent by the Muskoka COVID-19 Assessment Centres on May 1, they have to date completed 370 tests and have virtually assessed nearly 400 patients. These numbers don’t include tests administered through hospitals, long-term care or other institutions. They do not currently have a wait list.

Under a province-wide directive, the health unit is also undertaking testing of all staff and residents at all long-term care homes. At Fairvern, that’s anticipated for May 6 and 7 according to the April 30 update on its Facebook page.

Whatever the results, Dr. Gardner said that the health unit and long-term care homes will need to remain vigilant.

“The further testing that the Province has directed us to do [in long-term care facilities]may be a benefit to identify some asymptomatic cases and therefore be able to put further control into place. We shall see if that’s helpful or not,” he said. “Even once that’s done, though, it’s a one-time allotment of testing and so it’s of limited value. We would have to continue with all the other control measures and the surveillance because you can have things arise after you finish your testing.”