You are here: Home / Commentary / Community appears to be fairly evenly divided on by-election issue | Commentary

Huntsville council’s upcoming decision on whether to appoint or call a by-election to fill our vacant mayor’s chair is one of the most important decisions Council has faced in recent memory. The community currently appears fairly evenly divided on the matter, as borne out by a recent poll. 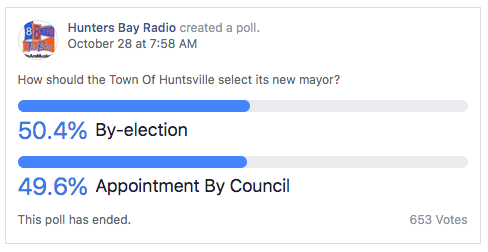 Let me begin by addressing the main objections most seem to have with a by-election. The top one seems to be the $100,000 ‘unbudgeted’ cost. This is likely a misleading number. I would bet that at least half of that is Town fixed costs (i.e. existing staff time cost). Would you consider $50,000 plus a few months of some existing staff time too high a price to pay for democracy?

Some have also argued the need for consistency and standards, which implies holding by-elections for other seats vacated resulting from the ripple effect on council filling the mayor’s chair and leading to higher spending. This is flawed thinking. First, it implies that all council seats are of equal importance, and therefore should be treated in a standard or consistent fashion. The mayor, as head of council, is also the chief spokesperson for our town, and our leader at the District Council table. The mayor can be thought of as the CEO of a town or city. The buck stops there. It is a much more important role than a councillor. The other vacated seats would be filled via appointment, without issue or cost.

Another argument made in support of appointment is that we elected councillors to make decisions on our behalf, and so empowering them to make this one too. This clearly overlooks the fact that some decisions are far more impactful and important than others. Second, no one thought when they voted for their councillors that they would be empowering them to choose the mayor for the next three years. It becomes even more questionable when the decision will be decided by six, perhaps fewer councillors, and would likely be very close.

The next three years could be the most challenging Huntsville has seen in decades; far from business as usual. Topping the list of challenges is the future of our hospital, and the enormous burden that MAHC’s latest two-new-hospital-build plan would place on Huntsville taxpayers. Our previous mayor was very well informed, and our strongest advocate and leader on this critical issue. He would not be pushed around by anyone, and fully understood the fiscal realities and limits quite well. That’s precisely what Huntsville residents want and expect in their mayor. For this reason alone, the people should choose.

There are other pressing big issues and challenges too, including aging infrastructure, business/residential growth investments, fighting for our share of affordable housing, local health and job creation and government funding. There’s also a likelihood that District/Municipal restructuring will heat up again. The Ford government has rightly decided to leave this in the hands of District/Regional governments. Changes there could significantly impact Huntsville, so a strong experienced leader representing our town’s interests at the District table is critical. Let’s also not overlook the possibility of a global recession, meaning a mayor possessing strong fiscal and leadership skills becomes that much more important.

Should we allow any election fatigue/overload to trump democracy? I think not.

Finally, do our councillors, given all that’s at stake, want to be on the record as having placed a small cost ahead of democracy? At least half of the people disagree with that, and they will be far more upset and vocal than those who simply say appoint. To those councillors interested in the mayor’s seat, would you want a cloud of legitimacy hanging over your three-year term as mayor, given the challenges ahead? I sure wouldn’t.

Dave Wilkin is a Professional Engineer who lives in Huntsville. He is an electrical engineer with a career spanning 35 years in IT, banking and consulting.