It was a great long weekend for the Bantam Hawks.

The team travelled to the 2019 Ontario Lacrosse Festival where they would become the Bantam B Box Lacrosse Provincial Champions.

They went up against the Newmarket Redbirds in their first game, a team they met three times during regular season play and didn’t lose a game. That winning streak continued as the Hawks took the win 6-0 with a shutout for netminder Evan Paré and goals scored by Kean Paré (two goals and two assists), Carson Robins (one goal and two assists), Keegan Shirtliff (one goal), Daniel Clarke (one goal), and Damon Buttus (one goal and one assist).

The second game had the Hawks play against a team from South Shore out of Quebec. The Hawks took an early lead in the first period but were unable to hold it as South Shore tied up the game in the third period with an end score of 3-3. Hawks goals were earned by Carson Robins (two goals and one assist) and Kean Paré (one goal and one assist).

From there it was on to the quarter finals for the Hawks, where they were up against Orillia. By the end of the first period, the Hawks found themselves down 4-2.  But the team rallied and played hard to steal back the lead and take the win 13-6. The Hawks leading scorers were Carson Robins (three goals, four assists), Damon Buttus (one goal), Kean Paré (two goals), Hunter Crawford (three goals), Ben Plant (one goal), Daniel Clarke (two goals and one assist), and Ethan Urbanski (one goal).

In the semifinals, the Hawks knew that they were up against a strong London team and entered the floor with a winning mindset. The Hawks came out victorious with a score of 10-6. Hawks goals were scored by Kean Paré (four goals), Hunter Crawford (three goals), Carter Boone (one goal), Ethan Wagg (one goal), Keegan Shirtliff (one goal) and Carson Robins (five assists).

The Hammond Well Drilling Bantam Hawks earned their way to the top and were off to the 2019 Ontario Lacrosse Association finals in the B Division against Gloucester. Head Coach Ken Robins reminded the team of their early season goal: to make it to the finals and to win.

At the beginning of the final game, the Gloucester team took a quick lead over the Hawks and the Hawks knew they were in a battle for the championship. It was about who wanted it more. The Hawks proved to have the grit to fight for it.

The first goal for the Hawks was scored by Kean Paré from Carson Robins. The second Hawks goal came from Keegan Shirtliff, followed by a third goal by Ethan Urbanski from Carson Robins. Kean Paré tied up the game in the third period to bring the score to 4-4. “These young men came together and rallied to tie the game,” said Robins.

With the game still tied at the end of the third, the championship game moved into overtime. The Hawks used their skill to move and control the ball and with 1:07 left in the overtime period, Carson Robins was able to pass the ball to Keegan Shirtliff who then shot the ball from the ‘top of the house’ and scored. Because it wasn’t a sudden death overtime, the Hawks had to hold off the Gloucester players and their determination for an entire minute before the final buzzer. With the championship win seconds away, the Hawks were able to kill the clock and became the Bantam B Ontario Box Champions.

“The entire bench staff were very happy with how this team came together this season and the goals they set out and accomplished,” said Robins. 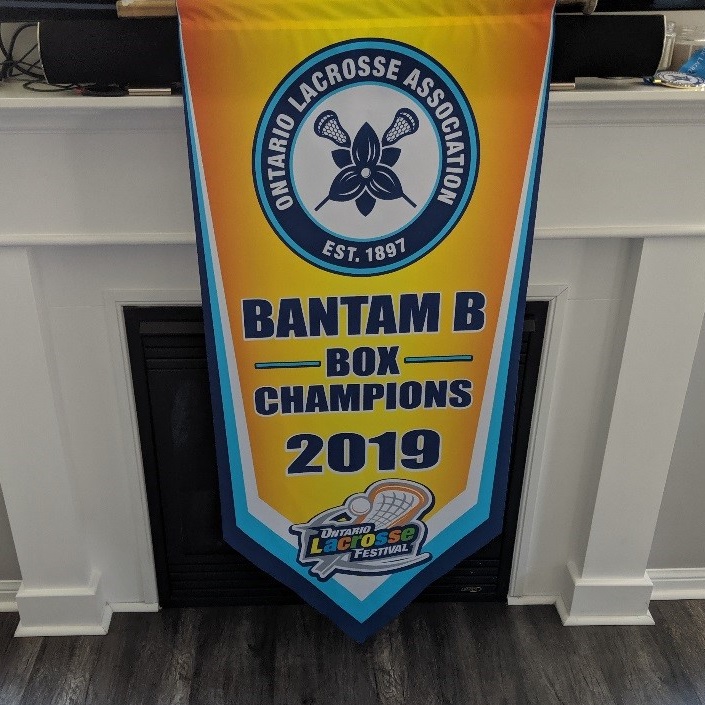