You are here: Home / Sports / Athletes of the Week: Cody and Mitchell Jones

Cody Jones and Mitchell Jones are both in their final season of their junior hockey careers with the Huntsville Junior C Otters.

They grew up playing in the Huntsville minor hockey system, and the cousins are a big part of the Otters family.

“I wanted to take the time to thank both Mitchell Jones and Cody Jones for their dedication, leadership roles throughout their time with the junior Otters. Their hard work and great attitudes will be greatly missed by the team and coaching staff. I wish them the best of luck in their future endeavours,” said Otters coach Marc Gagnon.

Otters captain Cody Jones, #10, has played hockey for 17 years as a defenseman and spent his entire junior career here in Huntsville.

“He has been a vital part of the Otters organization,” said Deb Reynolds, manager of the Jr C Otters.

“Hockey has given me great opportunities on and off the ice, from meeting new people to getting to play with old friends. It has always been something I’ve loved,” said Cody. His most memorable moments have been when he won the OMHA championships in his first year of Midget and then being named captain for the Jr C Otters.

Cody joined the Jr C Otters as an alternate player in his first two seasons and then was appointed captain this year as he had proven himself as an active leader both on and off the ice. He enjoys giving back to the community since Huntsville supports the Jr C Otters and helps to make it possible for him and the team to play.

“Huntsville is a community-run team and without them it wouldn’t be possible to play,” he said.

Cody won two awards while with the Otters: the Dedication to the Community award as well as the Most Penalty Minutes of All Time.

He thanks everyone who has supported him throughout his hockey career, and especially his parents for sitting in the cold arena every weekend, for making the long drives, and for putting up with him after his game losses.

“To all my coaches throughout my career, without them I wouldn’t be the player I am today. The countless unpaid hours they dedicate to all of us players instead of spending their free time with family doesn’t go unnoticed so thank you to every single one,” he said. “Lastly, to all the fellas I’ve played with over my career, some I’m lucky enough to still be playing with today: thanks for all the memories, laughs and blood, sweat, and tears over the years. Hockey has created lots of friendships on and off the ice and I’m glad I got to play with such an amazing group of guys over the years.” 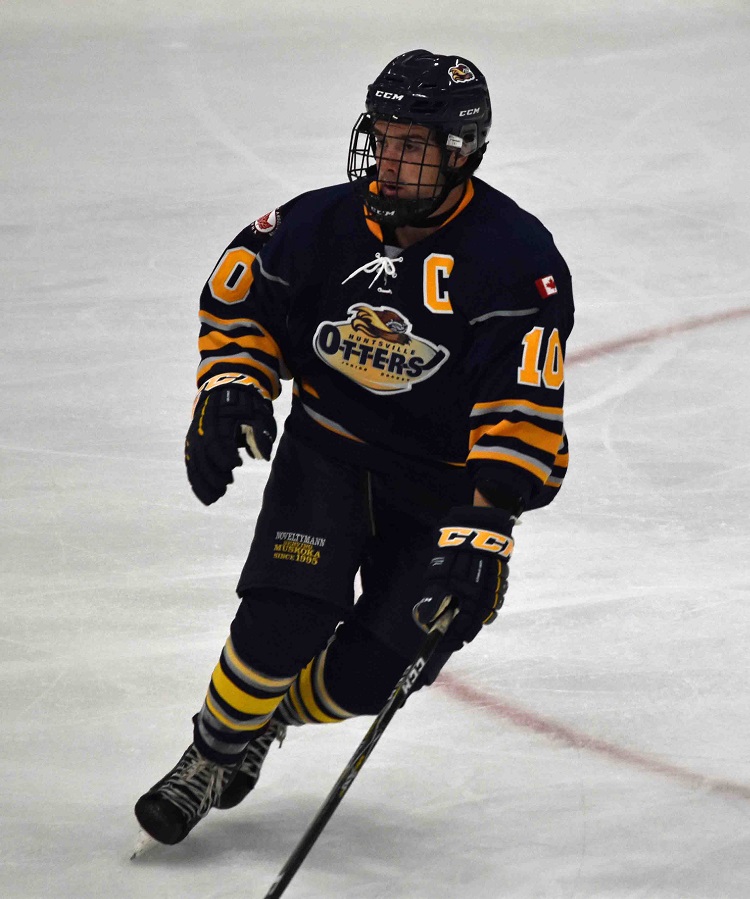 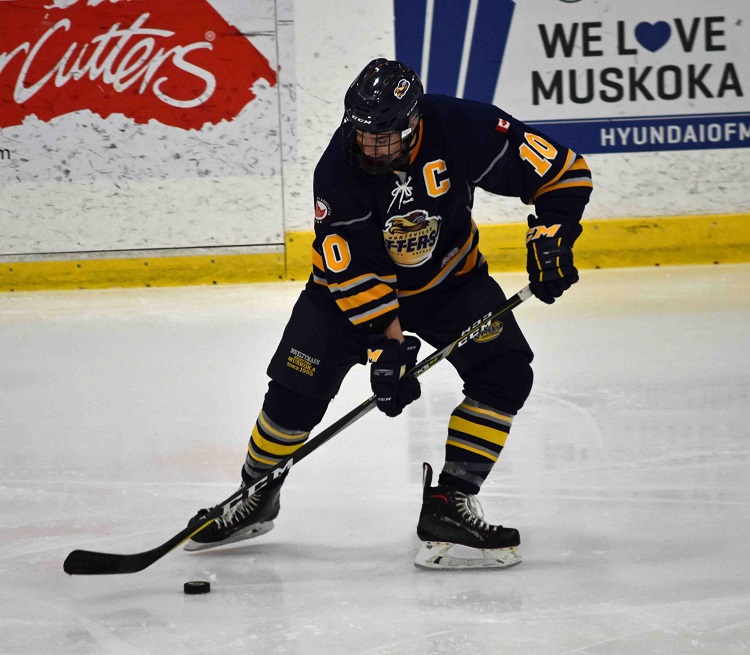 Mitchell Jones, #30, has been playing hockey for 16 years, 14 of those as a goalie. He was described as ‘goalie extraordinaire’ by the organization, and has played with the Jr C Otters for all but one of his junior career.

“Mitchell came back from a knee injury and became our starting goaltender and team MVP,” said Gagnon. A Huntsville native, Mitchell decided he wanted his last year of junior hockey to be in his home town. The Otters staff and organization thank him for coming home.

Mitchell loved coming to the rink to hang with the boys when he played minor hockey. “It always gave me something to look forward to after school,” he said.

One of his best moments was an Otters game when he got to play not just with his cousin, Cody, but also with his younger brother, Spencer, who was brought up for a game, and with their grandfather able to watch the game. He also said that when he played goalie for the Bracebridge Bears, his most memorable moment was when his team beat the Huntsville Midgets in the playdowns.

Mitchell is looking forward to coaching hockey after his junior career so he can give back to the community that has done so much for hockey in Huntsville.

“I wanted to say thank you to everyone who has been a part of my career over the years. Special thank you to my parents for all the time they spent at the rink with me and driving to those awful early morning practices,” said Mitchell. “I’d also like to thank two coaches. First, Jake Yard. Thank you for reaching out to me after I came home from Espanola to ask if I wanted to come play for the Bears. Next, Marc Gagnon, and the rest of the coaching staff and executive [at the Otters]. Thanks for letting me come back and finish my last year of junior at home. I know we all had our doubts on how well my knee would hold up after surgery.” 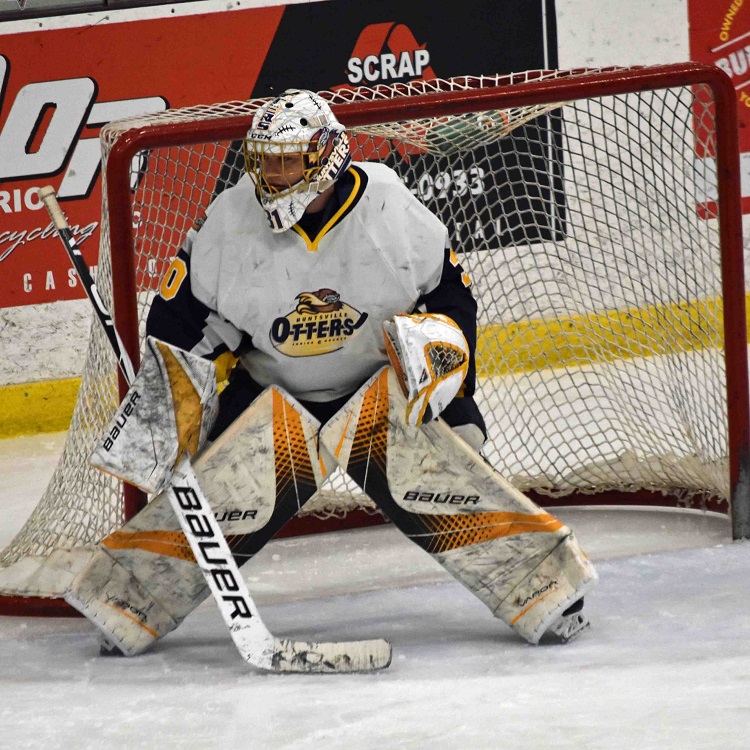 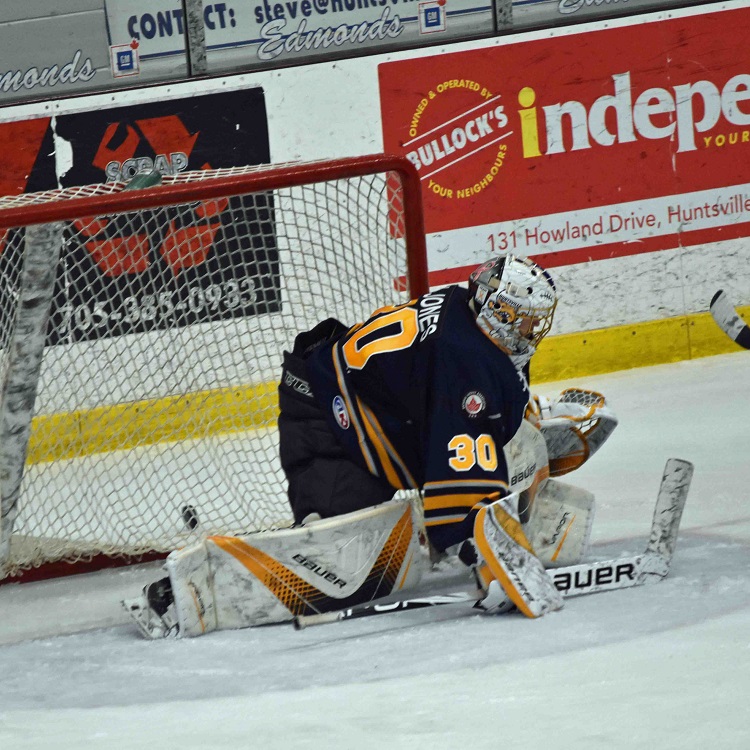 Both Cody and Mitchell have been a crucial part of the Otters Ambassador program this year alongside the other Jr C Otters who attended 12 different Huntsville Minor Hockey Association practices.

The boys’ final regular season game of their junior careers was an eventful game against Midland on Sunday, February 2.

“The game itself was exciting to watch as a fan but pushed my stress limits to the max as a coach with structure we have been practicing in order to get ready for Alliston in playdowns,” said Gagnon. “The group as whole wanted to learn and wanted to get better every week and we have as we enter the playoffs. I am very proud and happy to have worked with this group.”