You are here: Home / Business / Random acts of kindness for frontline workers

Like many businesses in Huntsville, Algonquin Outfitters (AO) looks for ways to give back to the community that supports them and has continued to do that even as the COVID-19 pandemic shut down the company’s storefronts.

“AO supports the community in so many different ways,” said Randy Mitson, marketing director at Algonquin Outfitters. They’ve been a Business Cares partner with the Huntsville Hospital Foundation since 2017, a $25,000 commitment paid in $5,000 installments annually—support that is all the more important today.

“We not only operate 10 stores in this area, we have about 100 staff and I know I’ve used the hospital a few times,” said Mitson. “It’s good to have a local hospital instead of if they closed ours and opened one in Bracebridge or Gravenhurst or North Bay. We have a lot of senior residents here, the drive time could be life threatening to not have a local hospital.”

The company also donated buffs to staff at the COVID-19 assessment centre to keep their hair out of the way as they work.

Mitson has extended that spirit of giving to his own contact with frontline workers. He said he’s saving about $120 a week in gas because he is now working from home. So to keep AO’s generosity alive during the pandemic, instead of pocketing that savings he has been tipping frontline workers who wouldn’t normally receive a tip while at work, from people in the grocery store to the pharmacy and the LCBO.

“I very much appreciate that these people are working and I’m safe at home,” he said.

Mitson, along with others, has also been helping local resident and artist, Janine Marson.

“She does so much to support Huntsville and is always willing to share her experience, knowledge, skills and heart with our community,” said Mitson. “She just gives and gives and gives. She’s one of those people that if you’re shirt was wet and you were to ask her for hers, she would take hers off and give it to you.”

Marson works at North Art Supplies and was undergoing cancer treatments during this pandemic.

“Surgery and treatments are hard enough under normal conditions and then you throw a pandemic on top of it? A lot of people in the community stepped up to help her in any way they could,” said Mitson. “She’s in really good spirits.”

Mitson is challenging other residents who can afford it to donate to frontline workers whenever they can during these challenging times. 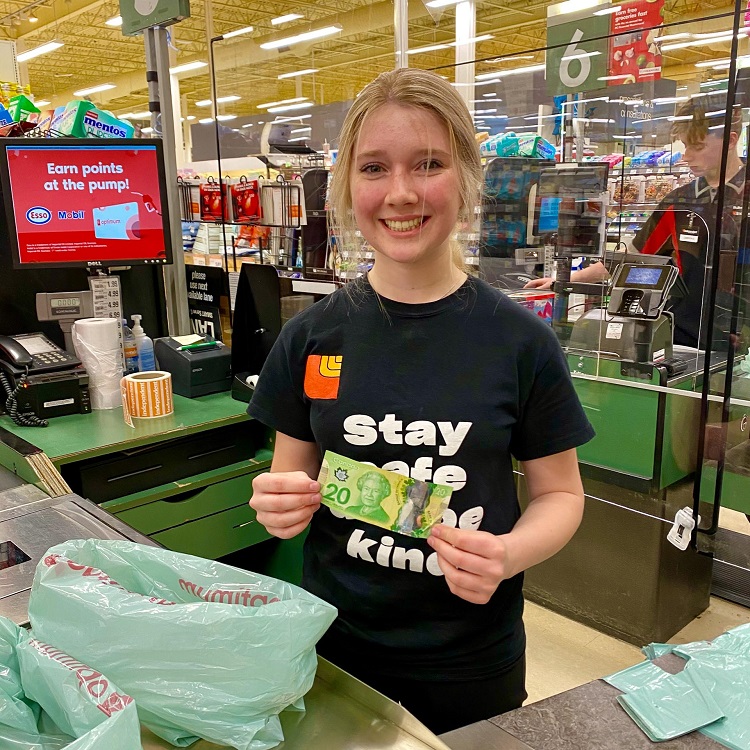 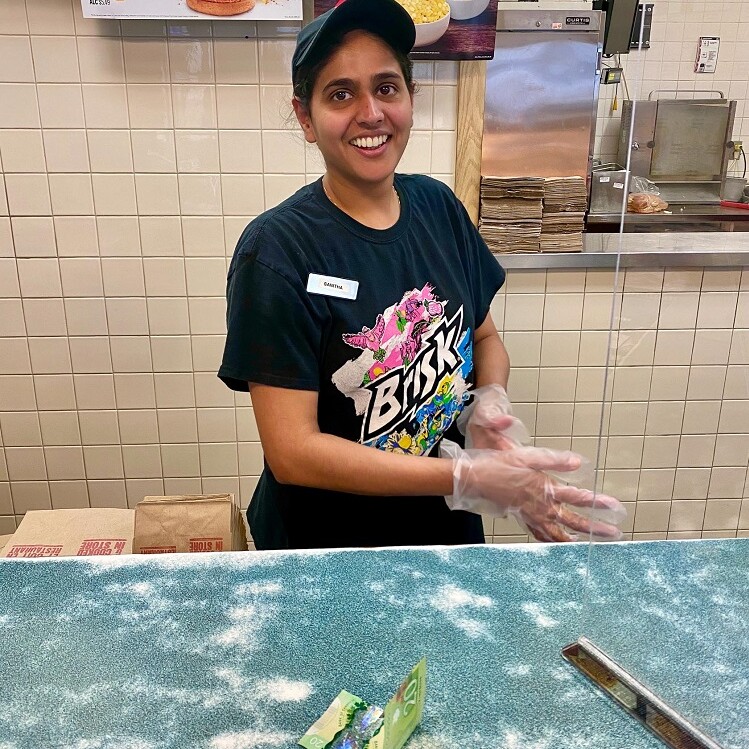 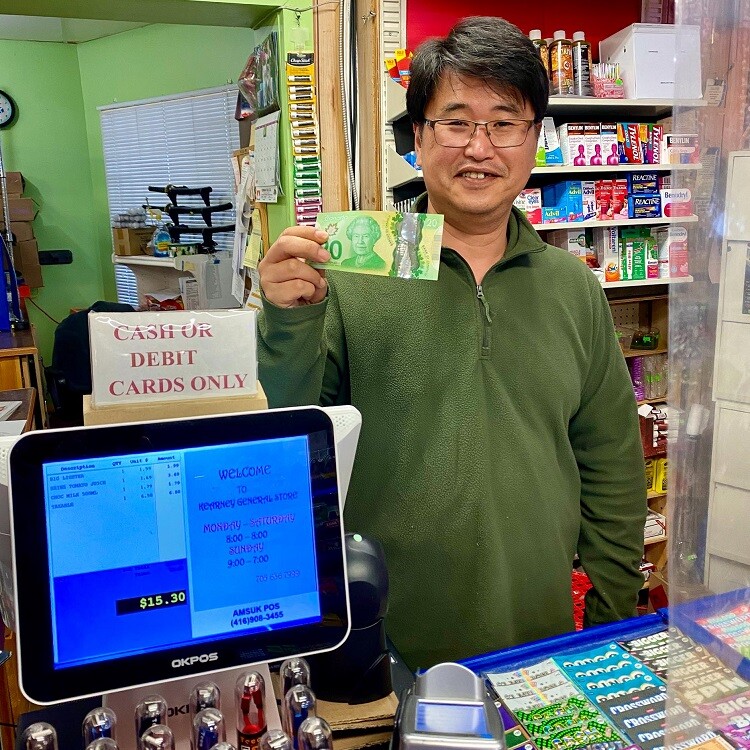 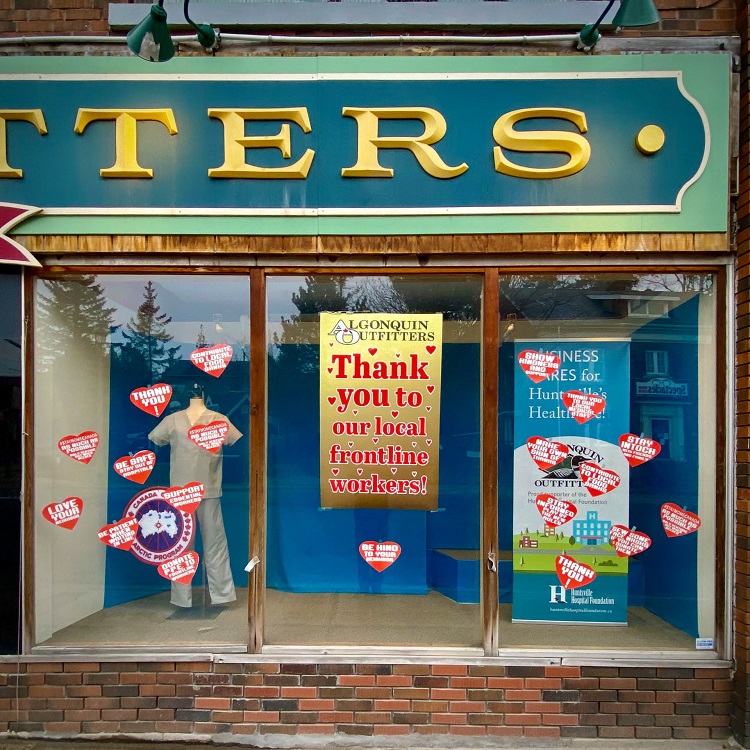 Algonquin Outfitters in downtown Huntsville was able to reopen its doors to the public on May 19, following guidelines from the provincial government.

“It’s been a gradual process, which we expected, but at times there are quite a few requests,” said Mitson. “Likewise with opening our Huntsville store on Tuesday, we wanted to continue to prioritize the safety of our customers and staff so we had a soft opening, not really telling anyone and just letting customers discover on their own that we are open. Even then at times it was quite busy.”

Given the government guidelines and the size of the store, Mitson said they could have nearly 100 people in the store at one time—one person per four square metres. However, he said it’s unlikely shoppers would be able to maintain a two-metre distance between each other at all times while browsing.

“We’ve made our own decisions on top of what the government has suggested, we’re not letting 100 people in our store,” said Mitson. “If everybody moves together, two metres apart is okay, but to stuff the store with that many people they’re not going to be two metres apart… We have higher protocols and protection in place than the government is recommending and we think that’s good for businesses to do.”

Mitson said one of the great things about AO and its staff is customers know they can come in and get quality, knowledgeable service and advice for their outdoor needs. Doing business during a pandemic has made that more challenging; from curbside pick-up service to online shopping, the interactions aren’t the same.

“Moving forward with reopening slowly and cautiously, there are a lot of things we worked on behind the scenes,” said Mitson. “Rich Swift [owner of AO]  was generous enough to realize there was some support from the government to keep people working, so we had our core staff continue working throughout all of this, even though our doors were closed and we were generating no money whatsoever, still having the hydro to pay and everything, he kept the managers and support staff on so we could take this opportunity to try and innovate. We realized we were going to emerge into a new world.”

Part of that innovation has been investing heavily in the company’s online store.

“Our online store had some challenges with inventory management that we couldn’t overcome. We decided with this time we would invest the time and effort and cost into custom software that allows us to eventually put all of our inventory online,” said Mitson. “Our very first website predated Google by about three months. We had a small 16-item online store that we couldn’t grow. Now we’ve done that and we’re about to launch it.”

Since reopening AO’s doors, Mitson said there are still customers who don’t want to come inside and prefer to continue with curbside pick up at this time.

He is encouraging people to make plans for the summer and still book their canoe trips and rentals as the guidelines for social distancing could be changing.

“If you need to cancel or rebook there’s no fee,” said Mitson. “If you wait there will be a massive backlog to get through. We’re at a point where people can start planning and just need to be more flexible. It’s not going to be the same as before.”