You are here: Home / Community / “Can-oe” create paddle art? Yes, you can! (And you can win great prizes, too.)

Iconic Canadian painter Tom Thomson traveled to many a picturesque vantage point in a canoe, and he mysteriously died in one, too. So what better way to commemorate the 100th anniversary of his death in 2017 than by combining two of the activities he loved – art and paddling – in one great contest. (Did you know that Tom’s paddle was never found?) 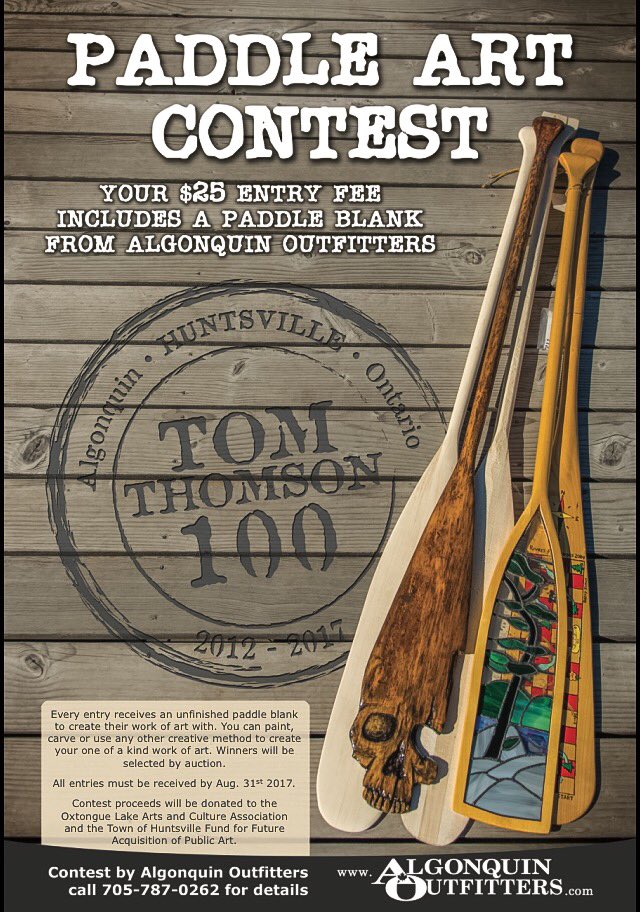 The Algonquin Outfitters Paddle Art Contest – which also celebrates the company’s 55th anniversary in 2016 – offers up paddle blanks for a $25 registration fee. Then you can unleash your creativity to turn that paddle into art: paint it, carve it, use it as a base for a sculpture or as part of a mixed media masterpiece. There are no rules (although AO may reject it as a contest entry if it’s not suitable for public display).

The fun doesn’t stop there. All of the returned paddles will be auctioned off in online and live auctions after the contest closes on August 31, 2017 (yep, you have almost a whole year to work on it if you want). The creators of the paddles receiving the highest bids will be awarded prizes from Algonquin Outfitters, North Art Supplies, Badger Paddles, White Birches Resort, Yakima and more – AO guarantees there will be at least one prize for every 25 paddles submitted.

Here’s some of what’s up for grabs so far:

But what if you love your creation so much that you don’t want to part ways with it? That’s okay – you’re not required to enter it into the contest but Mitson hopes you’ll stop in to the store to make a donation instead. The contest is a fundraiser, after all – the money raised supports the Oxtongue Lake for Arts and Culture (OLAC) and the Town of Huntsville Fund for Future Acquisition of Public Art.

“We’re hoping to get at least 100 paddles back to include in the auction to raise funds for these two great charities,” says Mitson.

So how can you enter? First stop in at one of AO’s locations – Huntsville, Oxtongue, Lake of Two Rivers, Opeongo, Port Carling, Bracebridge or Haliburon – to register and pick up your paddle. You may want to call ahead to be sure they have some paddles in stock. You don’t have to use one of the paddle blanks – you can use your own paddle – but you still have to register if you want to enter the contest

Then, get creative! When you’re done, return your paddle art to AO’s Huntsville location (86 Main Street East) before the August 31, 2017 deadline.

Finally, watch for the excitement of the online and live auctions. It’s okay to bid on your own paddle, too!

For more information on the contest and to check out new prizes as they’re added, visit algonquinoutfitters.com/contests/paddle-art-contest/.