The print industry has seen a lot of changes in the last 40 years – processes have become more automated, colour has become the prevalent choice, graphics have become clearer – and, despite the rise of digital technology, print remains a strong part of marketing campaigns.

Aben Graphics has watched print transform significantly over the past 40 years, and with it their business. The company began in 1976 as a small shop in Dwight when John and Helmy Aben bought Norton’s Hardware on Highway 60 and set about turning it into a print shop. They moved their Toronto-based print business north, initially keeping many of their city-based clients. At the same time, they bought Muskoka Printing and Duplicating.

Their local business grew and in the early 1990s their sons John, Paul and Mark joined the business.

“We grew up above the shop so it was always part of what we did,” says Paul Aben. “I remember as a kid, when I was 13 or 14, making World’s Greatest Mom and World’s Greatest Dad scratch pads as presents. I worked in the shop through high school and when I got into my twenties I decided to get involved a bit more.”

In the mid-1990s, they expanded their business to include retail operations – the Colour Crazy copy centre – when they bought Rayball Printing from the Forester Press.

Not long after that they bought two fully automated small-format presses which increased their productivity and, by 2001, they had outgrown their operations in Dwight. They bought their current location to bring both halves of the company – Aben Graphics and Colour Crazy – under one roof.

And they continued to grow. Adding a four-colour press allowed them to move almost all of the colour work they’d previously outsourced in-house. They invested early in desktop publishing, removing the need to create paste-ups, or art boards, to layout the design of a print job before it was photographed and then transferred to a printing plate. An imagesetter sent the design straight to film that could then be used to create the printing plates. And now, they’ve removed even that step with a computer-to-plate system.

“We’ve always been quality conscious,” says Paul, who now runs the business on his own – John and Mark have moved on to other ventures. “And everything has just gotten faster and faster. In the 80s a job would take a month or month-and-a-half to complete; now it’s a matter of just a few days to a few weeks.”

They now do almost all of their work in-house in Huntsville – only jobs too big for their equipment are outsourced.

A commitment to quality and sustainability

“We really like to make stuff. I’ve always thought of us as manufacturers,” says Paul. “And we like to be in control of the whole process to ensure it’s of the highest quality.”

Quality also means being adaptable to their customer’s needs. “A lot of the time someone will come in and say, ‘I didn’t know you did that,’ or they’ll ask if we can do something unusual.” Like a digitally cut shelf-dangler – a sign that hangs down from a display shelf – or branded patio umbrellas or highway billboards.

They’re conscious about being environmentally friendly, too. Part of Aben’s environmental commitment includes being a Forestry Stewardship Council (FSC) certified printer, a process that ensures their paper products have been responsibly manufactured right from the forest floor. “FSC-certified paper comes from a responsibly managed forest and there’s a chain of custody that ensures it’s sustainably produced right from the tree to the consumer. We are audited by FSC every year.”

And, always, their business is about people. “We are really about building relationships and servicing people well – it’s why we have a long-standing history with a lot of local businesses.” Paul is proud of that local history and he supports the local community by buying local as much as possible and sponsoring minor sports teams. “We all have to look to our communities first, it is where we live!”

Print marketing will continue to evolve but no matter how much is done by machine, there will always be friendly people at Aben Graphics behind it. And sometimes that makes all the difference. 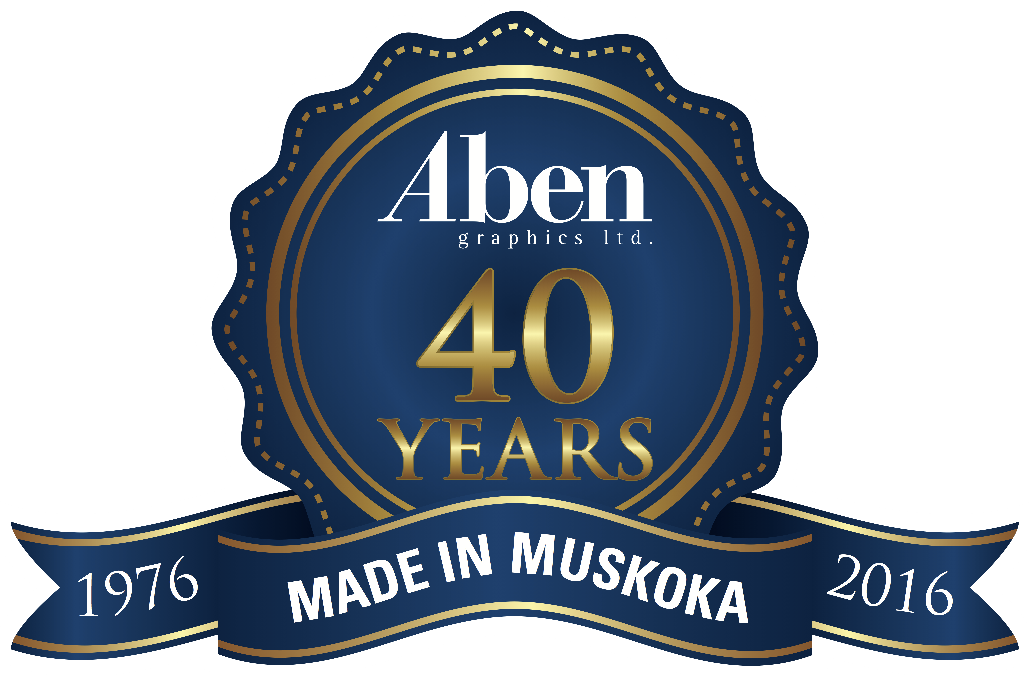